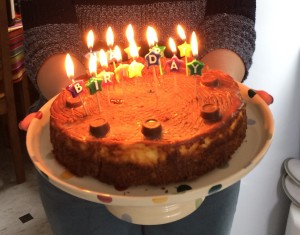 This month I have been hosting #WeShouldCocoa for Choclette (ever a more appropriate name?) over at Tin & Thyme. I actually chose the theme of USA with this recipe in mind, and made it at the start of the month, but I have only just got around to writing about it.

I first saw the recipe for Rolo cheesecake bars when a friend posted it on my Facebook page, and I instantly started to dribble. Okay I know rolos are British, not American (although they are sold out there by Hershey), but cheesecakes ARE American, especially baked ones. And Graham crackers are also from the USA, and I had a packet of them in my cupboard thanks to my brother picking them up for me (from Tesco of all places), so I felt they were perfect for this #WeShouldCocoa USA entry. 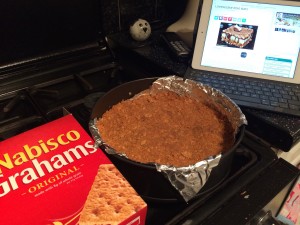 Here’s the link to the original recipe, which I used as my inspiration for a whole cheesecake instead of to little bars. However, I’d further tweak the recipe for next time: I wasn’t a massive fan of the thick Graham Crackers base so would go with digestive biscuits next time and make it a bit thinner and more crumbly; and the glaze split a little when I chilled the cheesecake so I’d go for something different next time.

Even though I reduced the amount of sugar in the original recipe I still found it a bit too sweet for my tastes, so I’d cut down on the sugar a bit more next time as well.

But that’s not to say this version isn’t very nice … and very rich … and very large, and it may be more to your taste than the next version I try. 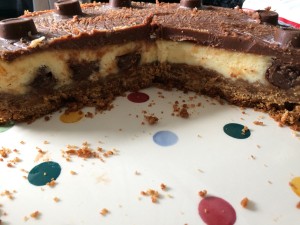 I made this in a 23cm springform round tin – I lined the base with greaseproof paper. Pre-heat your oven to 180 degrees.

Firstly make the base: for this you need to crush the biscuits and mix them with melted butter (the original recipe also suggested adding sugar to the base but I thought the Graham crackers were definitely sweet enough already). Press the sandy crumbs evenly into the bottom of the base of your tin and bake for 10 minutes at 180 degrees if you are using the Graham crackers. If you are using digestives then I wouldn’t bother to bake the base as I think it is unnecessary. 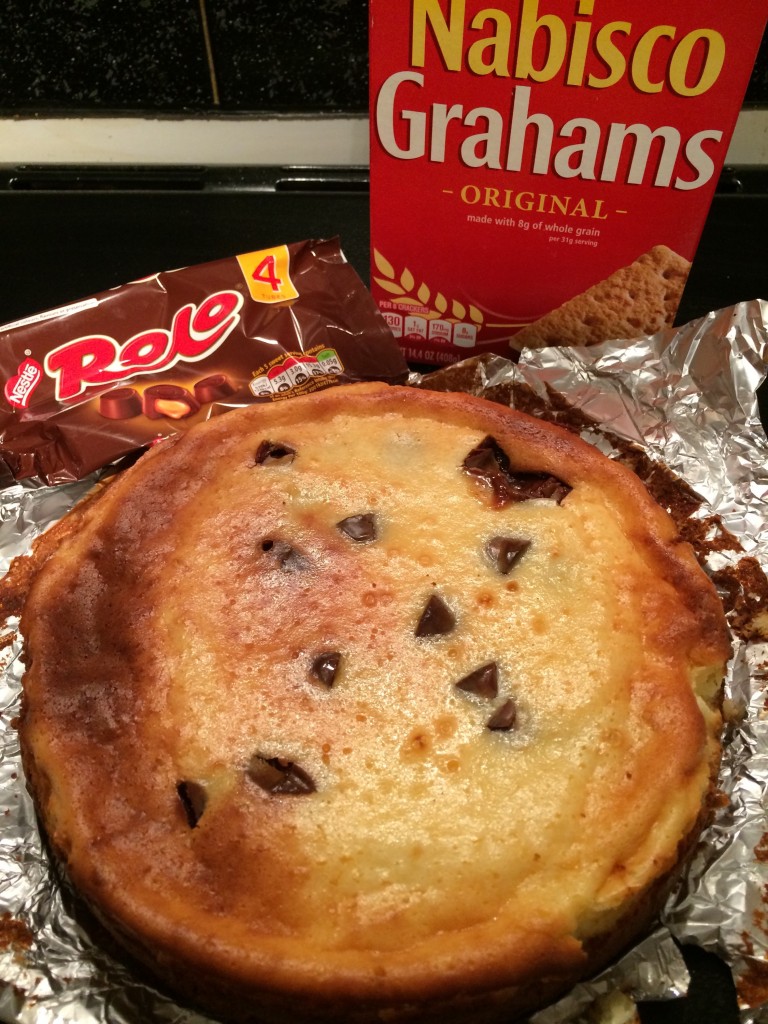 While the base is baking, mix together the cheesecake filling: simply beat together the cream cheese, eggs, icing sugar and plain flour until well combined and smooth and then add the whole rolos to the mixture, distributing them evenly throughout.

Take the base out of the oven and pour the cream cheese mixture over the top, spreading it evenly over the base. Then pop the whole thing back into the oven, reduce the temperature of the oven to 170 degrees and bake the cheesecake for 30-35 minutes.

When baked the cheesecake should have a gentle wobble on it but feel set when pressed – mine took 30 minutes exactly but you might need a little bit longer.

Once cooked take the cheesecake out of the oven and allow it to cool on a cooling rack.

I recommend making the glaze (whichever version you choose) as soon as the cheesecake goes in the oven, as whichever one you make you’ll need to allow it to cool and that can take a couple of hours). 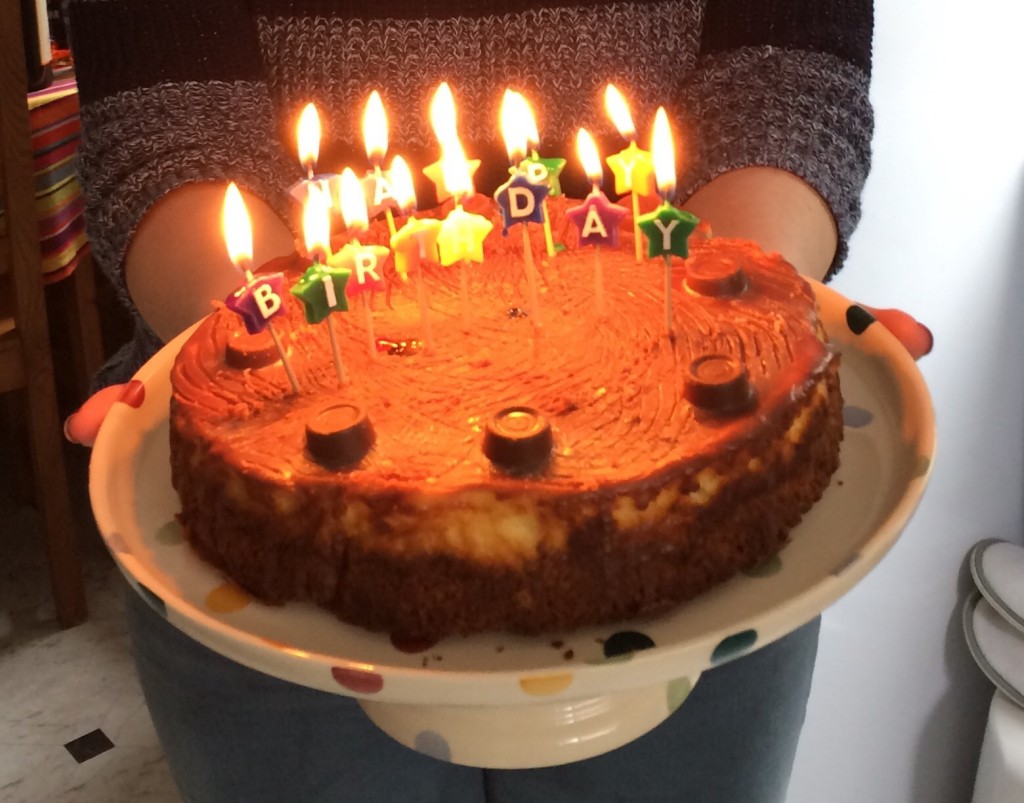 For the original glaze, melt the butter and chocolate together in a pan and add the liquid glucose. Mix the three ingredients together, making sure the chocolate doesn’t burn, and then allow it to cool slightly and thicken before spooning this over the top of the cooled cheesecake, allowing it to dribble over the sides. Decorate with whole rolos.

If you are making the alternative glaze, melt the dark chocolate into warmed double cream, stirring until well combined. As the ganache cools it will thicken. When it is so thick it barely pours (that could take a good hour or so), spread it over the top of the cheesecake. Swirl some of the caramel over the top as well to make a nice pattern and decorate with whole rolos.

Don’t forget to visit the #WeShouldCocoa page and check out some of the amazing recipes which have already been submitted, and I’ll be doing a full roundup at the end of the month so you can check them out in full. 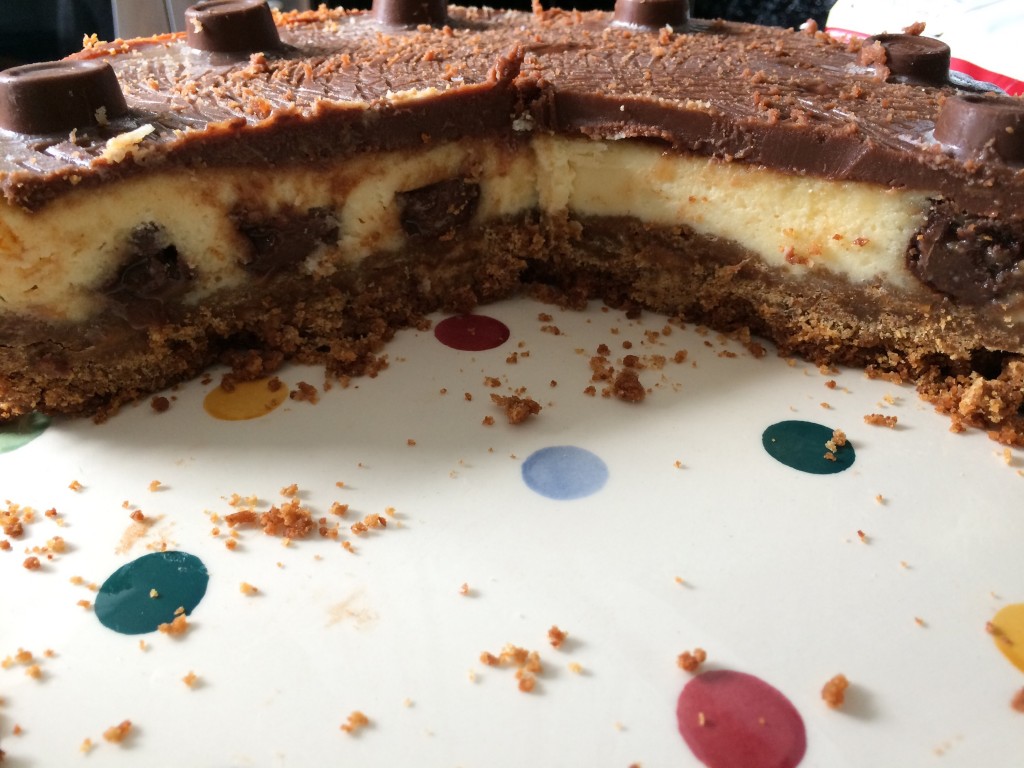