This Savoy cabbage with sausage recipe is straight out of Tuscany, and Tuscany has a special place in my heart. Last year, we went on an amazing holiday to Tuscany, and stayed in a gorgeous villa with our friends and their kids. I have been on holiday with few friends, but each time it’s been successful and I put that down to the fact that we are aligned in our greediness (also the reason I think Andrew and I are still happily in love after 24 years together). 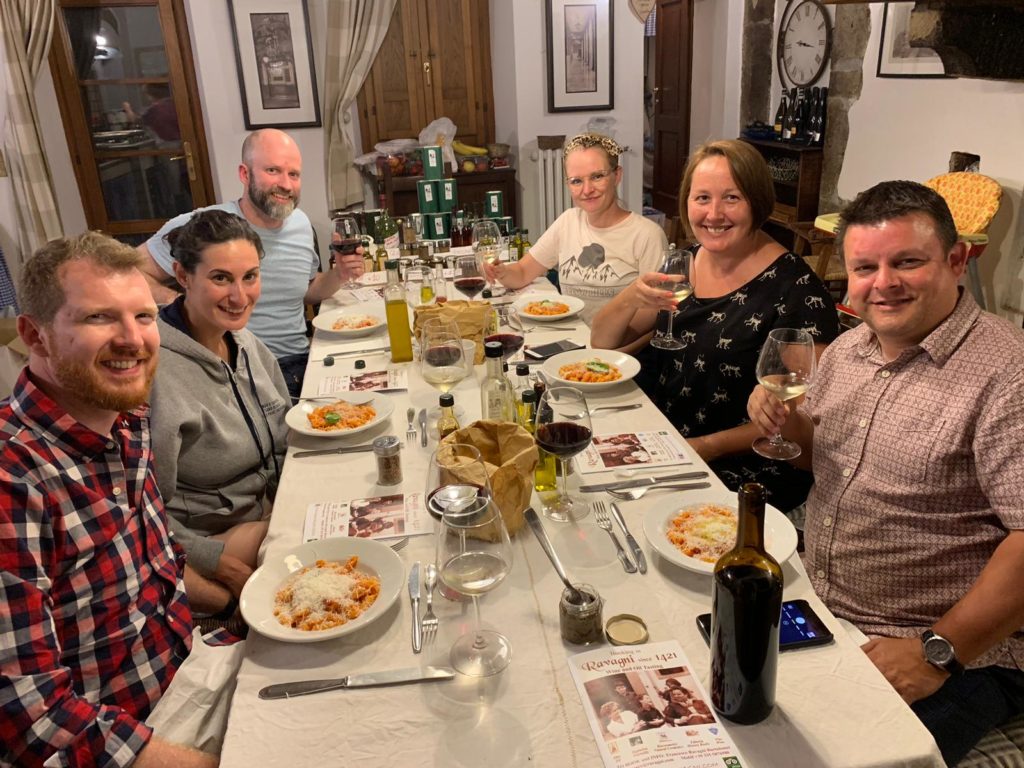 Tuscany was definitely a holiday of food. Mainly truffle, which became the unofficial mascot of the trip, but also Italian food in general. There’s a blog post slowly bubbling on the back burner regarding Tuscany and a few of our adventures, so more details will follow, but for now let’s just say that Andrew was inspired by that trip to buy me ‘From the Markets of Tuscany’ by Giulia Scarpaleggia, a book which celebrates the food of Tuscany. You can find out more about the author and her recipes here.

On a related note but a slight tangent: Andrew excels at buying me cookbooks. Although occasionally he’ll go for the Jamie or Gordon obvious choice, more often than not he finds unusual and interesting cookbooks which open our eyes to exciting recipes which generally are not to be found in your average ‘high street’ cookbook.

Back to ‘From the Markets of Tuscany’. This book is full of recipes I want to try, and in fact I ended up making two of the recipes in the same weekend, but this Savoy cabbage with sausage struck me as soon as I saw it. I made something vaguely along the same lines many years ago from Esther Walker’s Recipe Rifle (which no longer exists, although I still love her lifestyle blog The Spike), which was more like cabbage layered with pieces of sausage and butter.

A rustic feast of Savoy cabbage with sausage

Although it’s not an obviously Italian dish (if you are looking for the stereotypes there’s no pasta, tomato sauce, basil, cheese etc), but this Savoy cabbage with sausage screams rustic, and I guess that’s a bit what Tuscany is like. So it appealed. And the only thing I needed to buy to prepare the dish was a Savoy cabbage (Ioan’s favourite food is sausage, so we are always well stocked up in our freezer; garlic goes without saying; and I have a pack of sliced chilli in the freezer ready and waiting to be used). 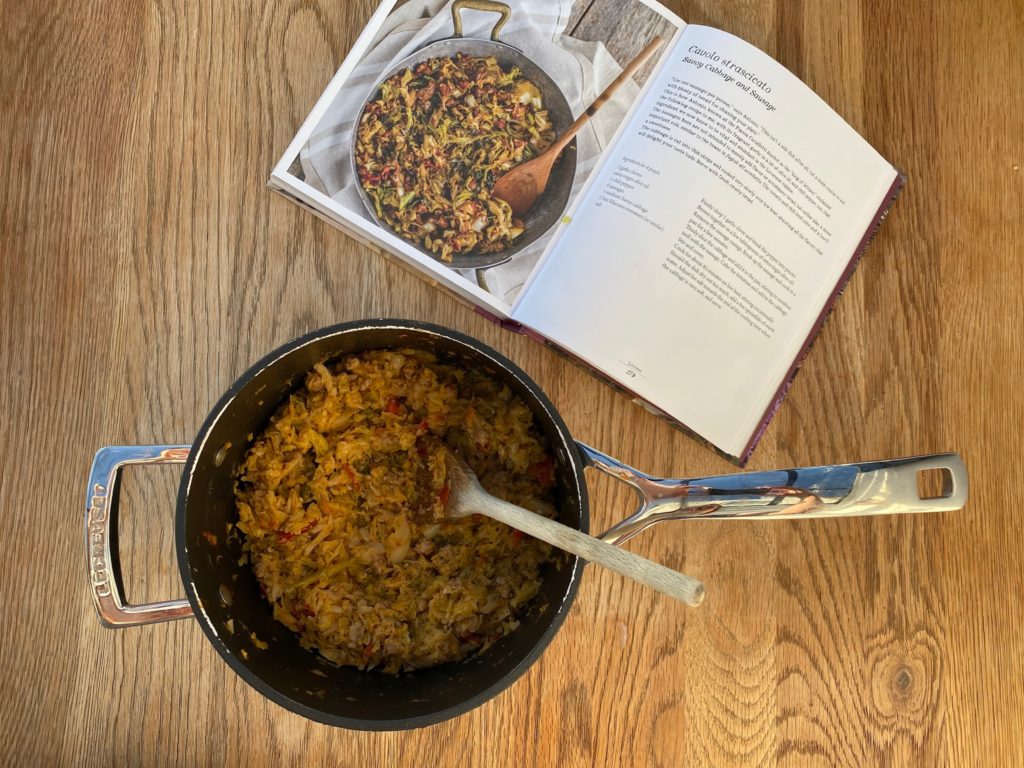 This recipe for Savoy cabbage and sausage apparently serves 4 and should be served with fresh crusty bread. I dished up the whole bowl to share with Andrew (Ioan insisted on eating bread spread thickly with butter and nothing else), as it didn’t seem like a huge amount of food for our main meal. Whilst it was more filling than it looked, I don’t think it’s really enough for four people. Next time I make it I’ll serve it as a side dish with roast chicken, or with some fish, and then it would stretch to four, or possibly six people. 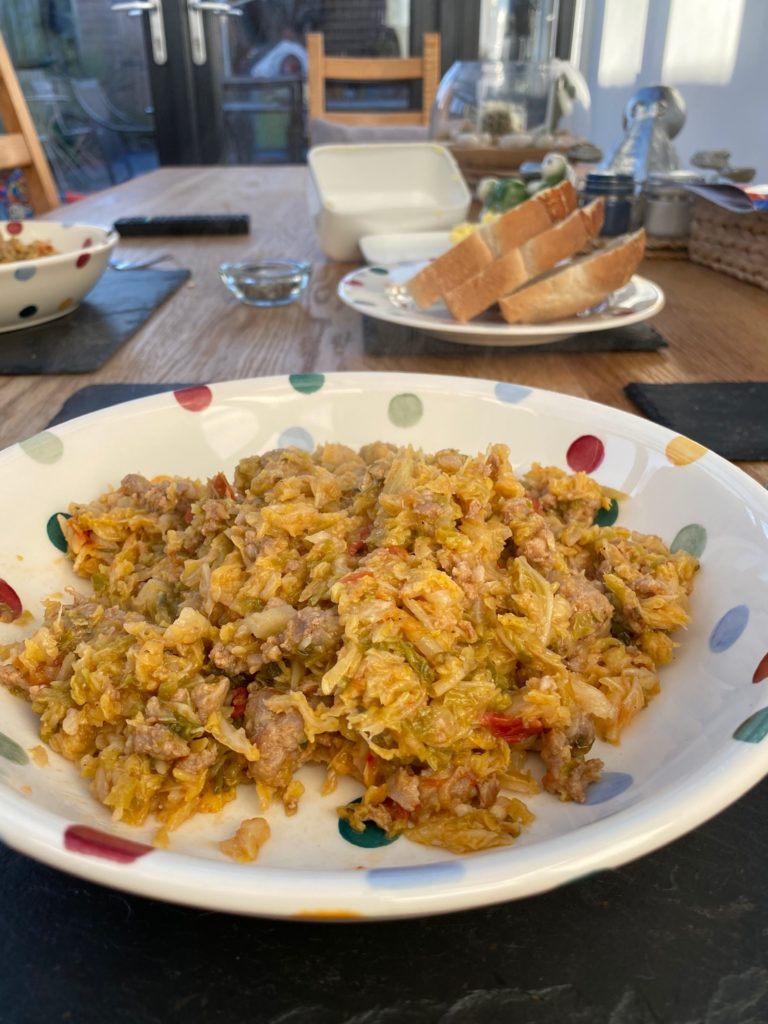 A point on the sausages: I used pork and red onion sausages from Waitrose because they were closest to hand when I had a rummage around the freezer for something to defrost. I think sausages with a punchy flavour would work even better – I’d try next time with Toulouse sausages. The recipe called for four sausages but I used six as that’s how many were in the package. 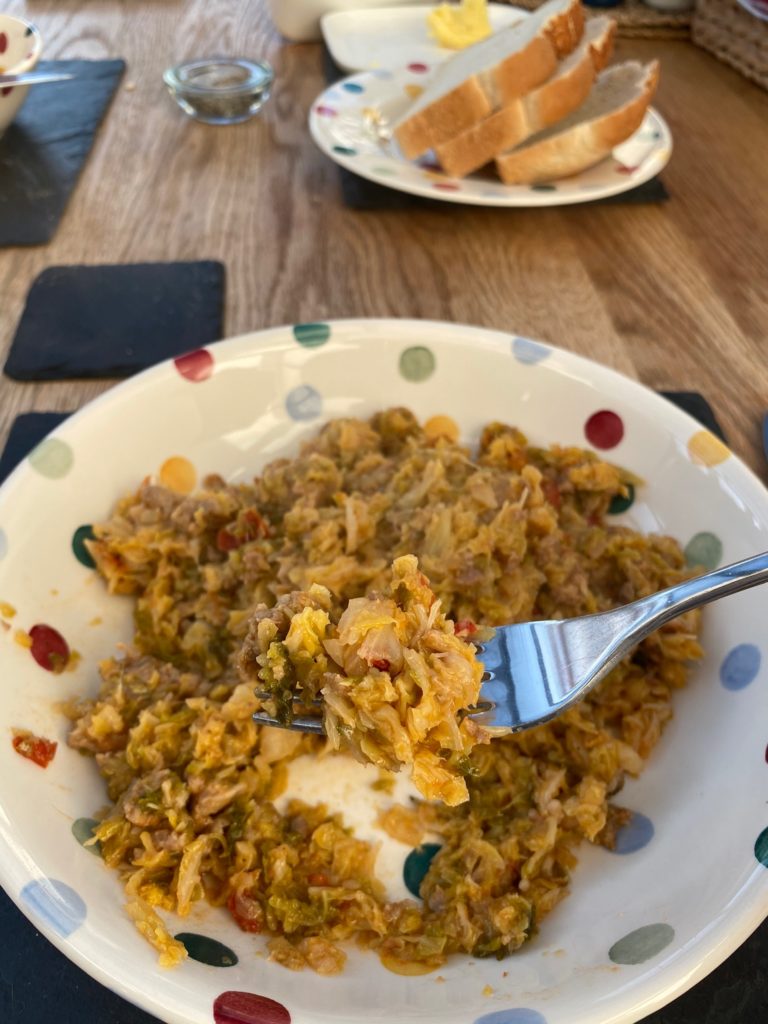 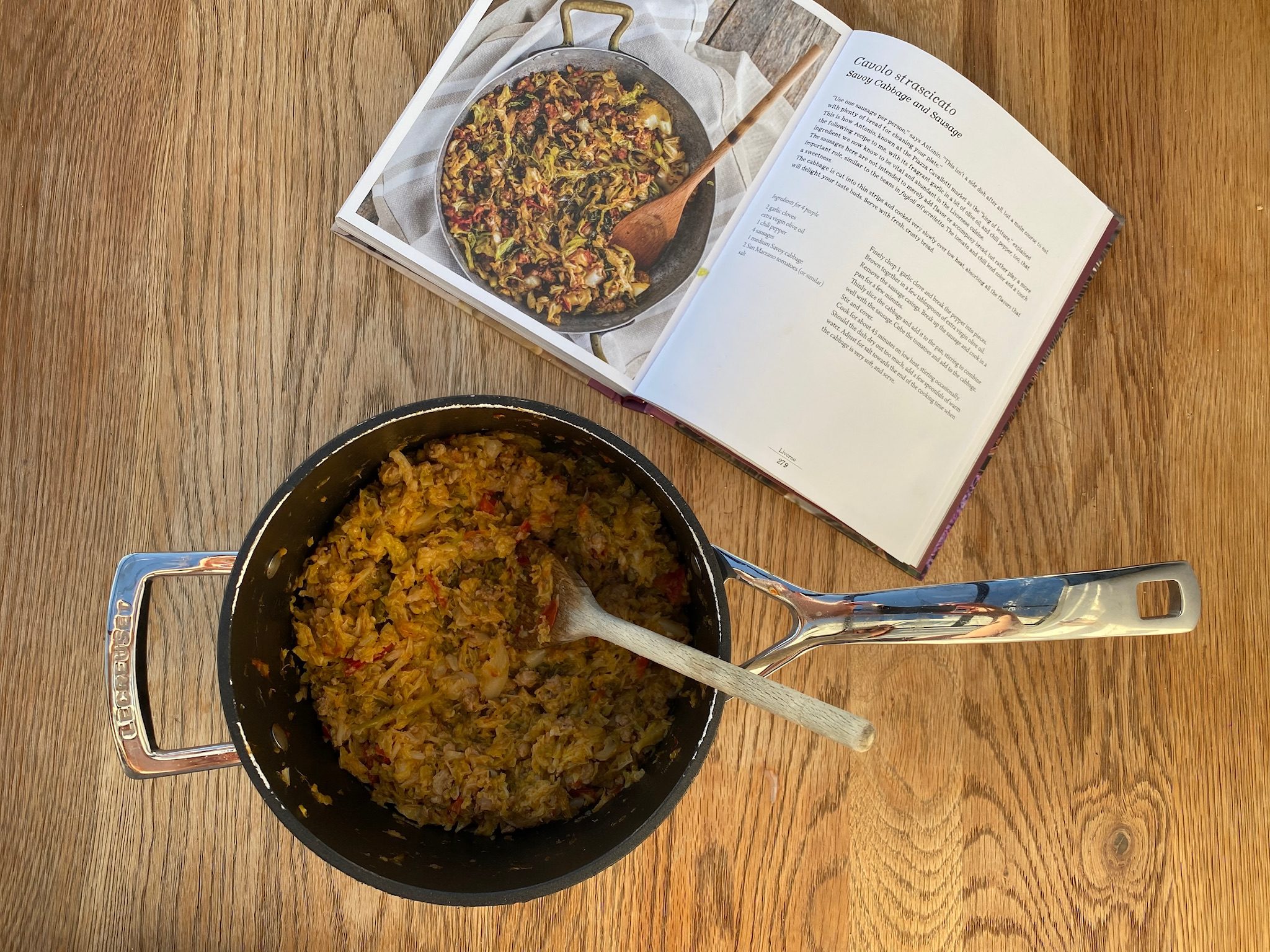 Giulia Scarpaleggia
A hearty and delicious meal from Tuscany: tasty and satisfying. This recipe has been adapted from Giulia Scarpaleggia's 'From the Markets of Tuscany'. Find out more about her at https://en.julskitchen.com
Print Recipe Pin Recipe
Course Main Course
Cuisine Italian
Servings 2 greedy people

This would work very well as a side, served with roast chicken.
Keyword cabbage, italian, sausage, tuscany

Sausages are definitely a favourite in our house. Here are some other sausage recipes for you to try: