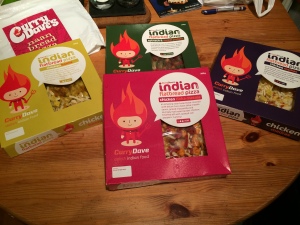 When I was approached by ‘Curry Dave’ to review his range of curry pizzas (“currizzas”), I wasn’t exactly optimistic about the prospect. I like pizza, and I like curry, but a combination of the two sounded a bit weird and not very appetising.

However, it did occur to me that the Curry Dave range might appeal to my brother Jason, who counts Iceland as one of his favourite food shops. As his special favourites include microwave doner kebabs and chicken tikka lasagne, it was actually quite surprising that he hadn’t come across this range of currizza himself (the reason is that they are currently only sold via Ocado).

So I invited Jason over to sample this range of treats, and bought plenty of extra samosas, bhajis and skewers to supplement the pizzas, on the assumption that Andrew and I wouldn’t like them and would have to have nicer things to eat! I know, I am a snob. 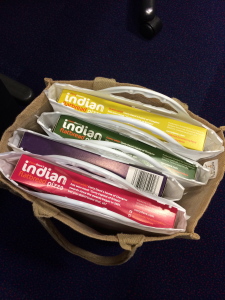 Curry Dave’s colleague (also called Dave!) actually hand delivered the samples to me outside my office (it turns out that he also used to work in financial services and knew several of my colleagues – small world!). He generously gave me one of each of the range:

As I chatted to Dave, I began to like the sound of the currizzas more and more, in no small part because of Dave’s enthusiasm about the product. The base of the pizza is naan bread, and they are topped with sauce and spiced meat, as well as the traditional pizza topping of mozzarella. Dave first invented the combination while running his restaurant in Chamonix – the only Indian restaurant there – and decided there was a business to be had there. 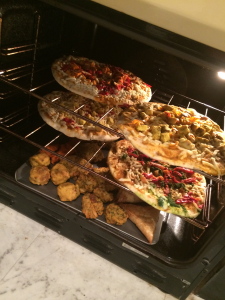 Both Daves are very proud of the fact that the pizzas are now available for sale via Ocado (they are on offer at 2 pizzas for £5 at the moment) and they are just about to launch in selected branches of Tesco.

So off home I went, with my bags of pizzas. They bake for around 10 minutes in the oven and each pizza would be plenty for one person, so four pizzas plus sides was more than enough for three of us greedy beasts. Luckily Henry the cat was there to sample some of the pizza as well – he was particularly keen on the chicken topping, which is a good indicator of the spice levels of the currizzas – none of them were at all spicy! 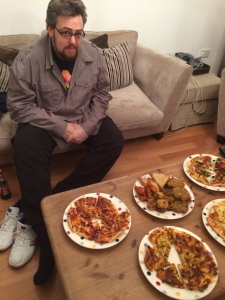 So what was the verdict? Well, to our surprise Andrew and I really enjoyed them, and will definitely be buying them. I am not sure we’d want to have them as a meal on their own, but rather as a snack when friends come over, with some other nibbles.

Jason was not as keen on them as I had expected, and that’s probably because they don’t have that salty, processed taste of some convenience foods (and that’s probably why Andrew and I liked them!). I wasn’t overly keen on the chicken on the pizzas – it had the texture of processed chunks rather than proper pieces of meat, but I expect that’s common for most pizza toppings (as a rule I don’t like meat on pizza). I fed my bits to Henry, who – as you can see from the photos – couldn’t get enough of it. 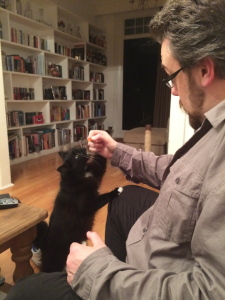 The main negative point for us all was that the ‘spicy’ pizzas are anything but, so don’t expect to need to cool your mouth with some milk – if you do like spice on your pizza (or curry) then add some of your own.

You can but Curry Dave’s currizzas online at Ocado, and visit their website and Facebook page to keep updated about them. If you have tried the range then let me know what you think about them in the comments below.

Thanks to Curry Dave for the pizzas, and to my delightful brother for donating his digestive powers to It’s not easy being greedy. 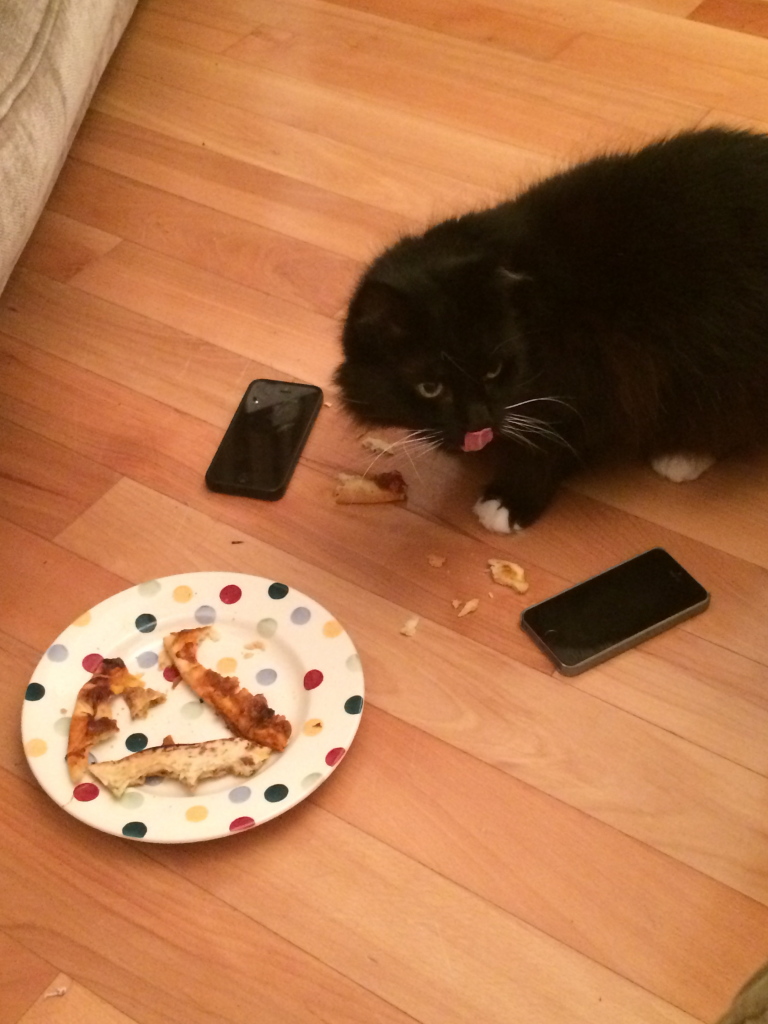