In September 2019, we went to Tuscany for a week with ioan and some of his little friends (and their parents, of course). It was a wonderful holiday, and warrants a blog post in itself (give me time, I am still trying to get myself back into the swing of things blog-wise), but I wanted to share one of our best experiences: olive oil and wine tasting with Francesco from Ravagni olive oil company.

Now, there were six adults on holiday, and we three women (who organised the whole thing) decided to book a Ravagni olive oil and wine tasting for the late afternoon, leaving the kids with their daddies. To sweeten the deal, we suggested they all do the tasting at lunchtime, then come back to the villa for us to swap over parenting duties. Unfortunately the daddies were more clued up than we had anticipated, and realised that they would only have a couple of hours drinking, whilst we mummies would spend the rest of the afternoon and evening on the Italian lash. So unfortunately they refused, but fortunately Steph managed to convince Francesco to come to the villa after bedtime and conduct the olive oil and wine tasting whilst the kids slept (hopefully).

Plans foiled, we had reasonably low expectations of the evening. We were told that Francesco would bring with him some light snacks to accompany the tasting, and so enjoyed a late afternoon barbecue around the pool to fill our tummies. The kids were all exhausted by their afternoon swim and so we had them bathed, read to, and in bed by 8pm when Francesco arrived at the villa with an older lady who worked with him. They asked to set up the kitchen whilst we waited outside in the lounge, and we all waited dubiously to find out what would happen next.

What happened next at our Ravagni olive oil and wine tasting is that we walked into our kitchen, which had been transformed: laid with white tablecloth, plates, cutlery and wine glasses (not ours, winning immediate points for the lack of washing up at the end of the night!). Bottles of different flavoured olive oils by Ravagni were laid out on the table, and we were invited to dip hunks of fresh bread into plates of oil whilst we learnt a bit about Francesco’s family run business. 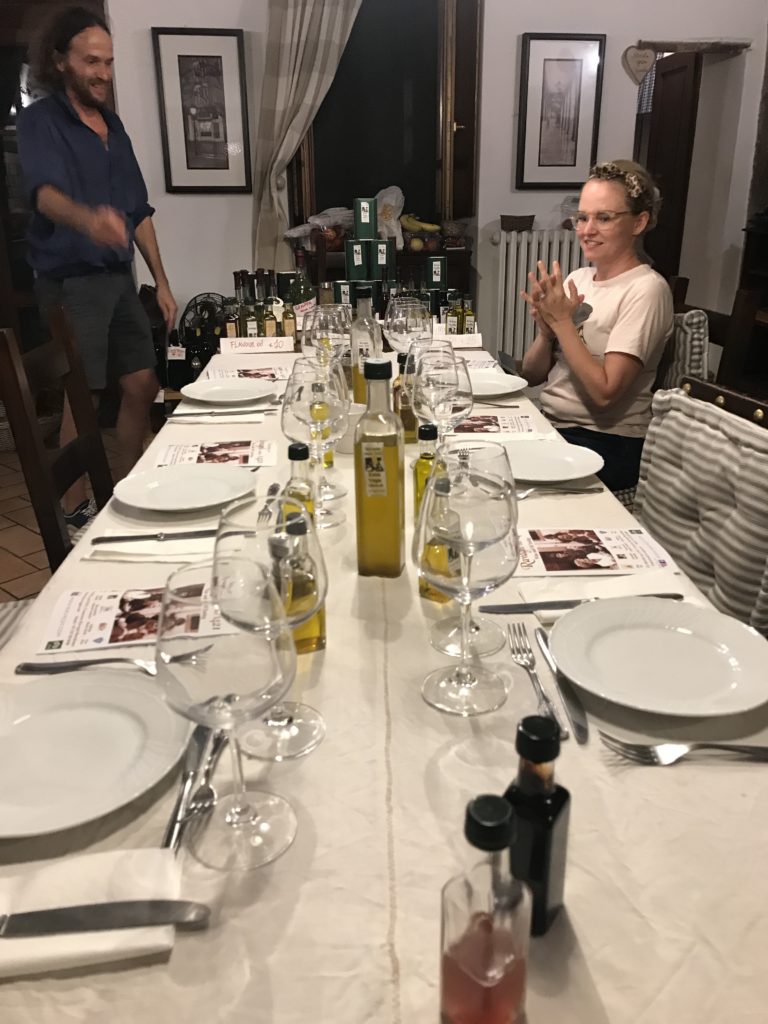 As well as olive oils flavoured with truffle, lavender, lemon, orange, rosemary, and so on, Francesco also offered us samples of his wine. When I say “offered us samples”, what I actually mean is that he kept our glasses constantly full of wine so that before long we were all extremely … shall we say merry?! 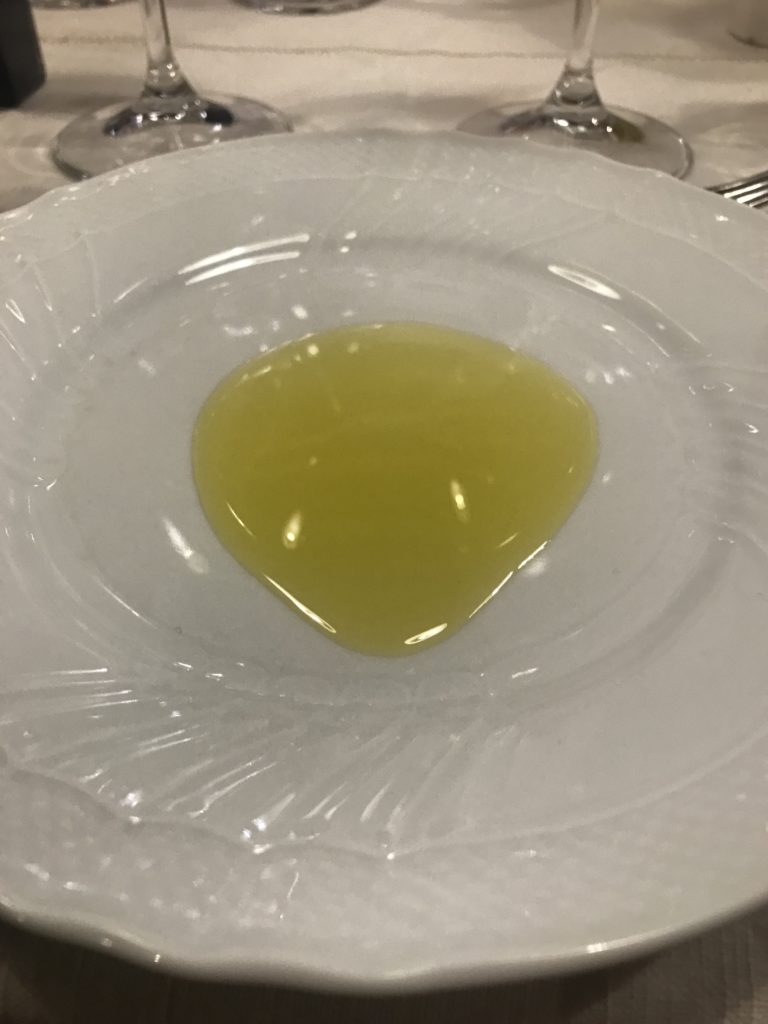 The Nonna who joined Francesco at the villa prepared our ‘light’ meal whilst we were sampling wine and olive oil, and it turned out to be anything but light. Firstly we had a huge bowl of pasta with tomato sauce. The sauce was made from tomatoes grown in Francesco’s garden, and was delicious. The pasta was served al dente, and I had always assumed I knew what al dente was, but the pasta was much harder than I would have expected, and it was actually very nice. I made a mental note to myself to cook pasta for a couple less minutes in future. 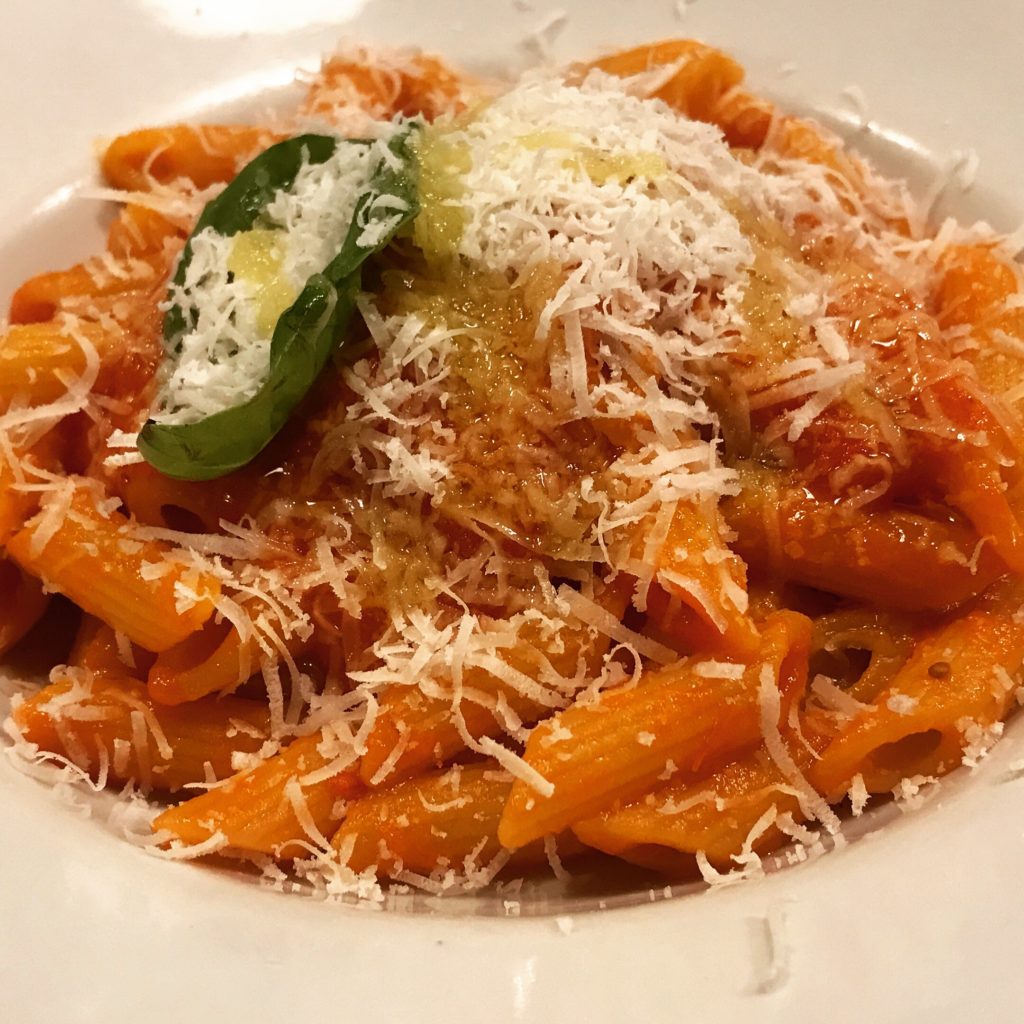 Next we had a plate of small tasters: melon from the garden with local cured meat; omelette made with eggs from his chickens with sage (Francesco recommended that we add some truffle to the omelette, which was delicious); bread with homemade chicken liver pate; sliced courgette with parmesan and some of Francesco’s lemon infused olive oil; and a slice of tomato with salt. 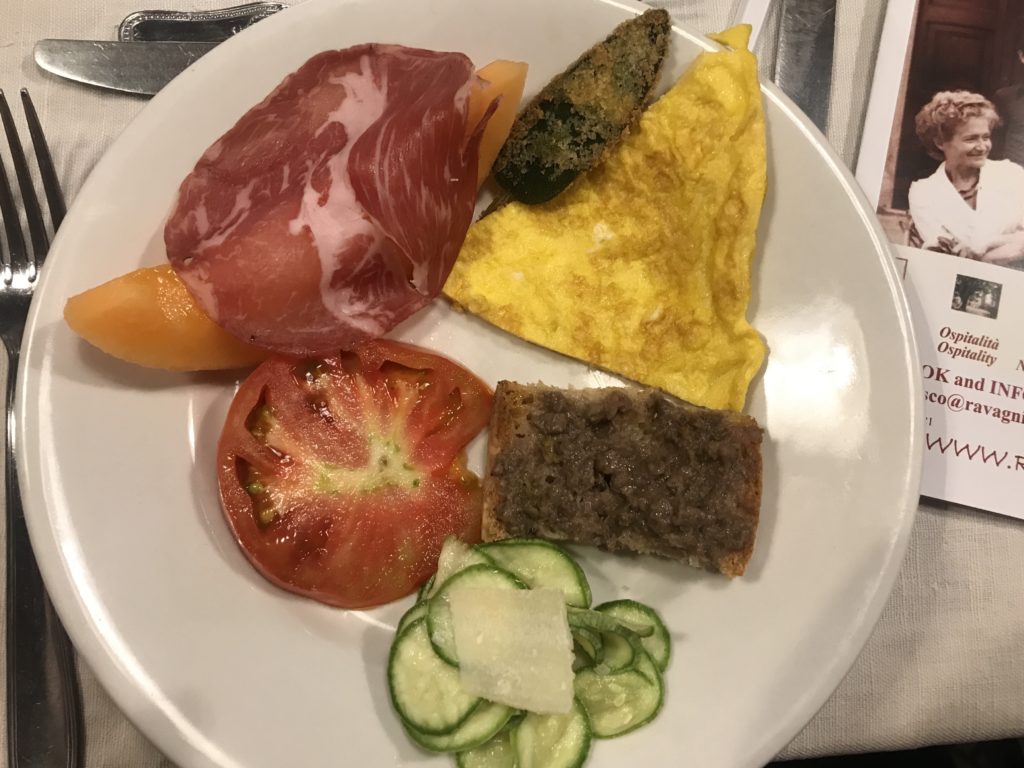 Obviously, alongside all of this delicious food we also had several generous glasses of wine each. Essentially this was not a Ravagni olive oil and wine tasting session, but a fully blown binge drink, and we were delighted to participate!

Finally, we were served a dessert platter of homemade cake with cherries; a slice of orange with pepper; kiwi fruit, and a quarter of a peach. The cake was drizzled with Francesco’s vin Santo, and everything was so fresh, light and delicious, that it really inspired me to consider similar desserts with seasonal ingredients when back home, rather than a more traditional British pudding. 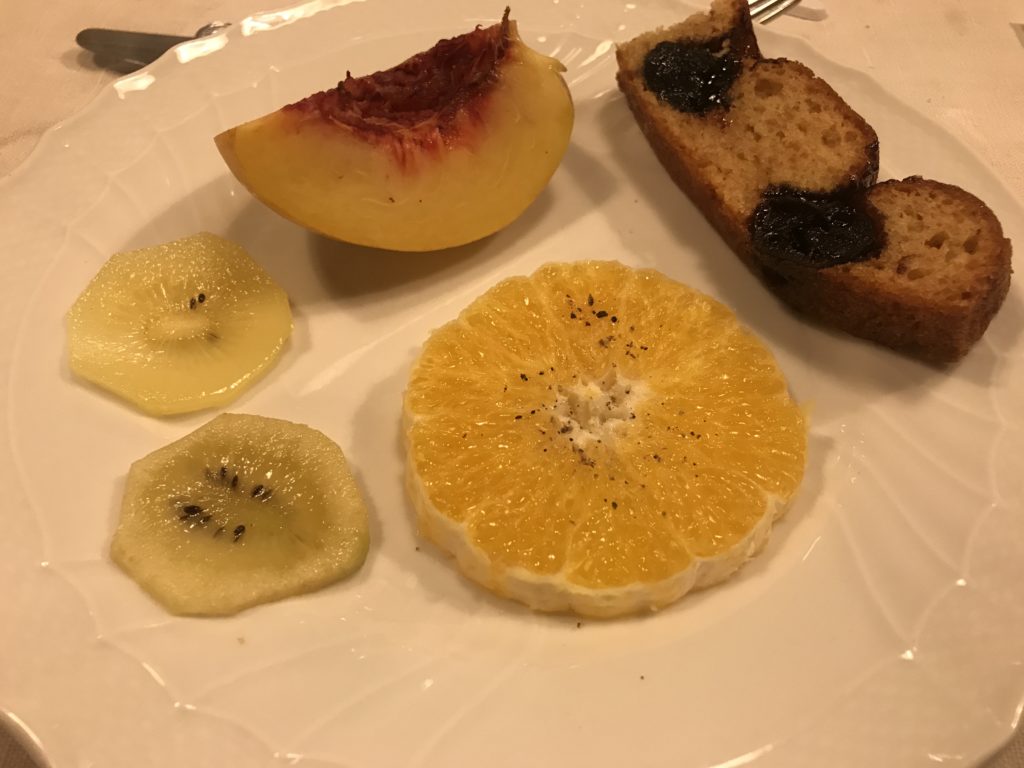 Of course the feast did not stop there, because Francesco then wanted us to try his digestif. I can’t remember the name of it but you can see from this picture that it is fearsome stuff. 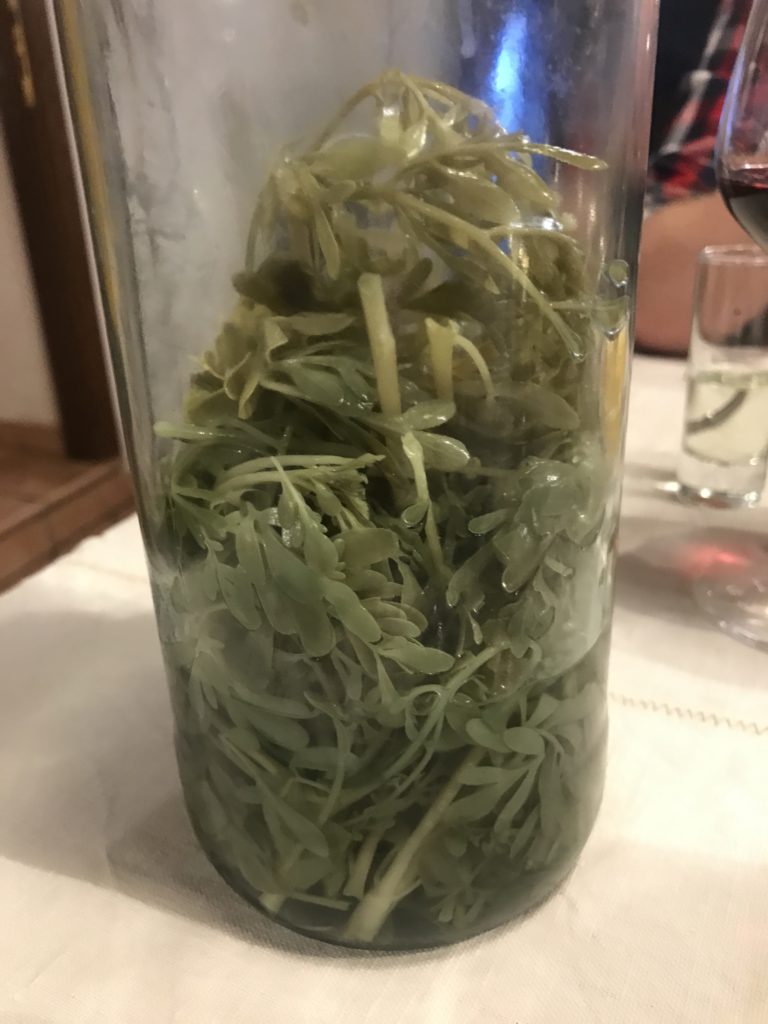 I only managed a small sip, but Andrew downed several glasses, and started to concern us all with his bright red face (Fergus had to take him off for a few games of pool afterwards to allow him the opportunity to cool down!). 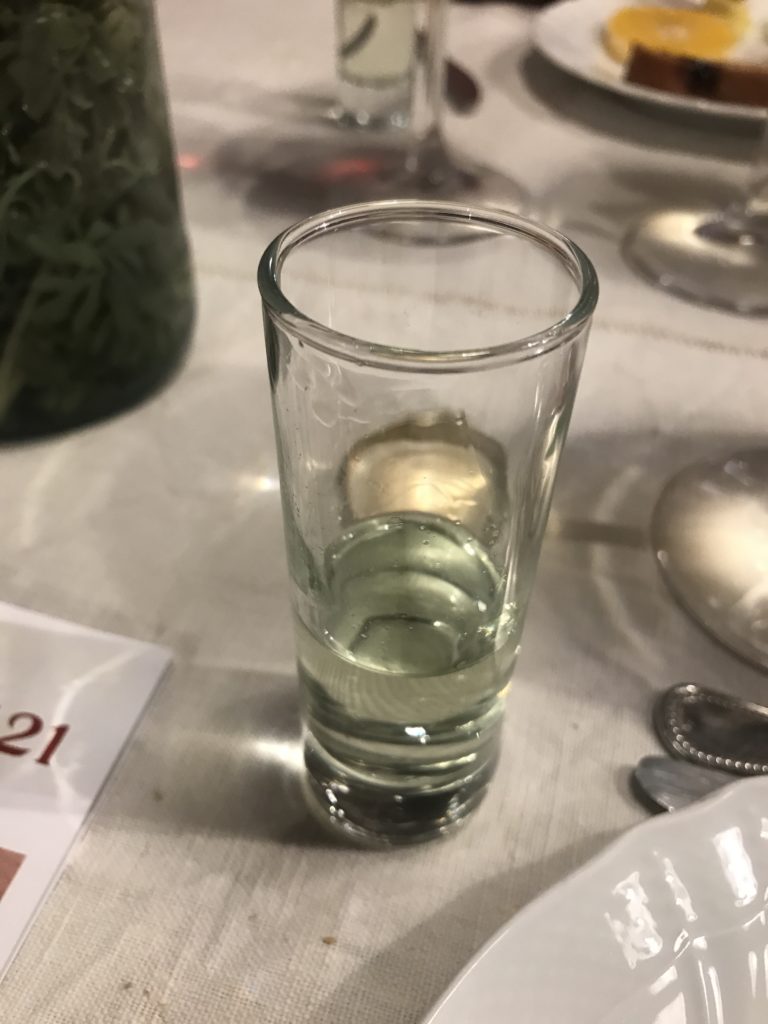 I think Francesco would have happily stayed at the villa with us for several more hours, plying us with wine and olive oil (and his crazily strong digestif), but we were all probably as drunk as we could get away with in a stone-floored (and staired) villa full of toddlers, and the Nonna was looking knackered, so we bid him goodnight and collapsed into bed (Andrew, after he had cooled down!). 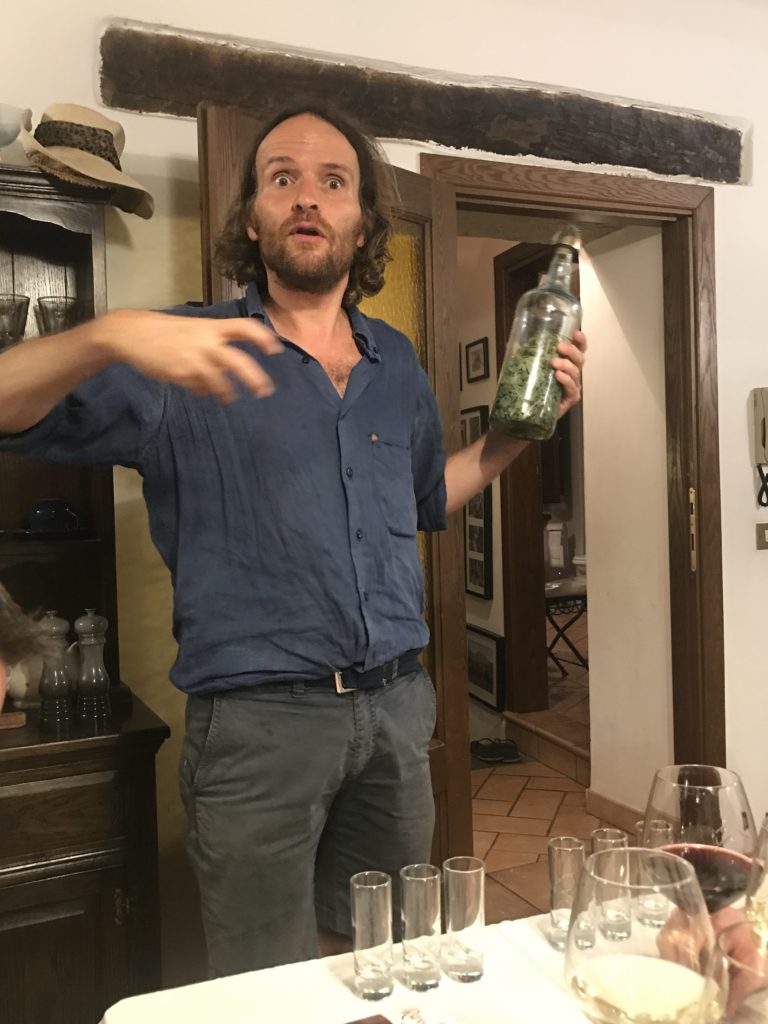 We did take home a bit of Ravagni with us – a couple of Francesco’s flavoured oils, and truffle paste, which I am still rationing so that I get to taste a bit of Italy in north London.

I realise that you need to be in Tuscany to take advantage of this experience (and, more specifically, in Anghiari or nearby), but it was too good fun not to share, and hopefully if you ever are in that neck of the woods you will take the opportunity to go and visit Francesco’s place for a Ravagni olive oil and wine tasting, or have him over to yours. 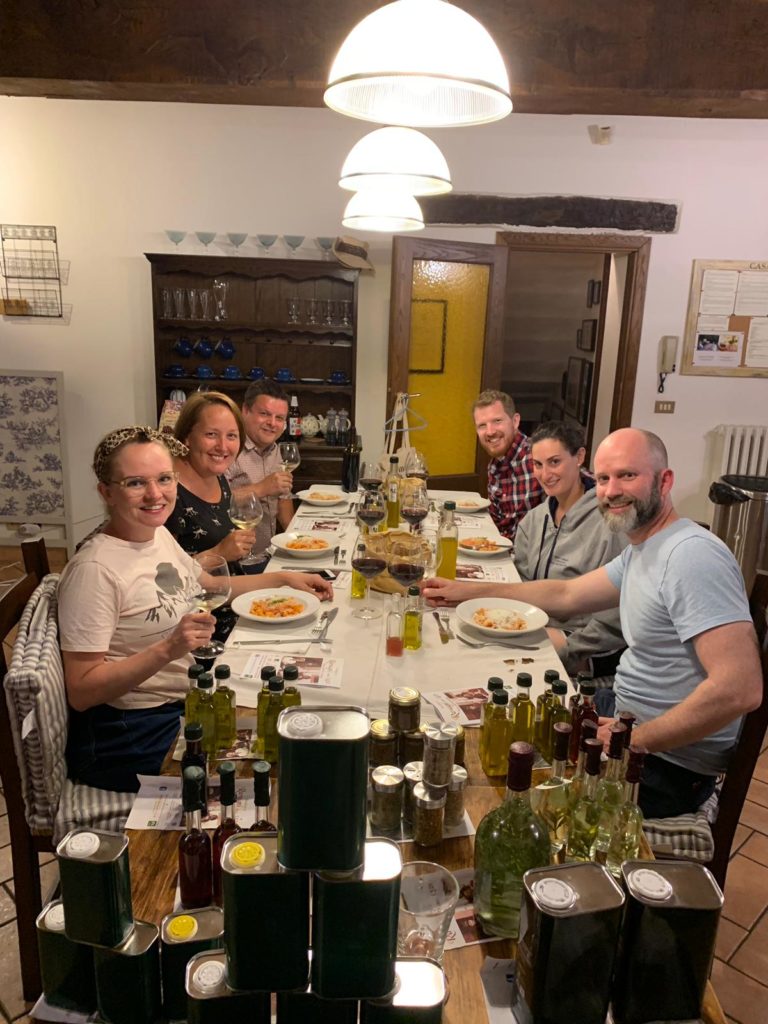 Does this tempt you into trying some pasta? Then here is how you can make your own homemade pasta. I also have this delicious chicken orzo recipe if you don’t fancy making your own.