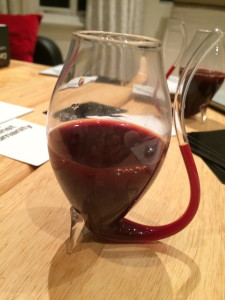 This week has truly been a week of delicious food, despite almost all my plans going to pot. I started the week properly with beef curry and brown rice as planned, cooked as my plumber started working on the installation of a new boiler. I had forgotten that not having hot water extended to the kitchen tap as well, which meant I had to use boiling water from the kettle to wash my dishes (as we were still awaiting the installation of our new dishwasher).

So when the plumber said that we’d have to move a load of furniture around upstairs so he would have access to replace some very old radiators, 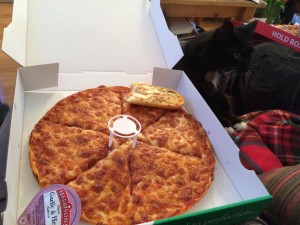 I decided to invite my brother over to provide the necessary brute strength to move our furniture with the bribe of takeaway pizza (which, of course, has the added benefit of being delivered in cardboard boxes which do not need to be washed up). Screw the diet. And Henry the cat was very keen to help out on eating up the pizzas … 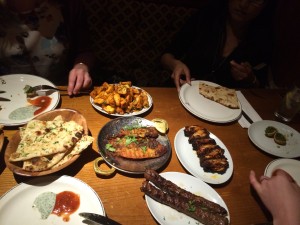 My mouth is watering even now as I think of the house special cassava chips, spiced chicken wings and mushy peas in pastry. Now I know that the intimidating entrance, protected by a buzzer entry system, hides nothing more than a friendly and informal restaurant / bar, I’ll definitely be back again (and hint, hint, I am hoping Deena will also take me there for seconds, as she’s clearly a VIP of The Regency Club since she’s been going there regularly since she was a child and doesn’t have to join the huge queue for a table). Anyway, full review to follow soon.

Andrew was out on Thursday and I had the delightful task of trying to put the house back into some kind of order as the boiler work was finally finished, so just made myself a quick meal of courgette ‘pasta’ carbonara, and then on Friday we were off to the Canadians for a post-work feast. 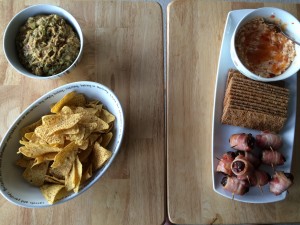 I love having dinner cooked for me, and when I heard that Jr was actually working from home so that he could tend to the meal throughout the day I knew I was going to be in for a treat. We started off with some appetisers of sweet dates wrapped on smoky bacon (one of my favourite combinations and I think I probably ate more than my fair share of these); crispbreads with a dip made from feta and sweet chilli sauce (what a gorgeous combination, possibly one of our new favourite tastes, and definitely an idea I will be stealing for my own next time we have people over); and a guacamole flavoured with cumin with nachos. 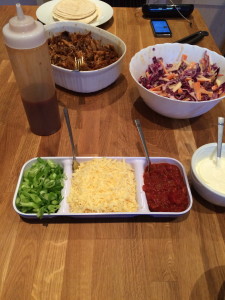 After stuffing our greedy little faces with these tasty treats, while knocking back G&Ts (great hosts, Steph and Jr) we moved into the kitchen to access the production line of tacos which Jr had set out for us. He had slow roasted a huge joint of pork which he’d pulled, soaking it in a homemade liquor which I also need to steal the recipe for.

But no store-bought coleslaw to go with our tacos – Jr had made a coleslaw which included apple, something I’d never considered adding to coleslaw before but will certainly be doing next time I make pulled pork. There are two tacos on my picture below, but I have to confess that I did go back for a third. 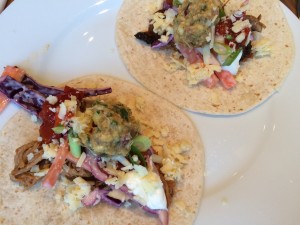 After a little break from the food where we watched the new Star Wars film trailer (goosebumps, that is all I will say), followed by the film of Matthew McConnaughey’s reaction to said trailer (which was, according to my brother, the same reaction as his own), we moved onto a pudding of light and zingy lemon couscous cake served with Canadian ice wine (so called because the grapes used to make the wine must be frozen for a minimum of three days before harvesting … the last fact I remember before I moved on to drinking Canadian maple whisky and then port and it all went downhill from there). 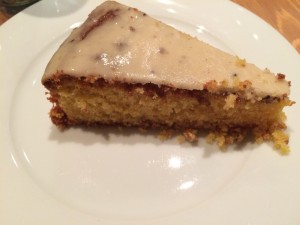 The next day (yesterday) arrived with me feeling a little tired and delicate, but today I am feeling a bit more like my normal self and ready to get sorted for the week ahead. But, lucky me, I don’t need to plan a menu for this week as I am off on holiday to Krakow, Poland, with Andrew’s family as an early celebration for his 40th birthday.

I am going to make a light dinner of salmon with cream cheese and leeks wrapped in filo pastry for tomorrow, and then we’re up early on Tuesday morning to catch our flight, while my dear brother is back again to house sit and cat sit until we return in a few days.

Obviously I have extensively researched what food I may be eating in Poland and will certainly be trying pierogi dumplings, kielbasa sausage, gulasz stew, an open sandwich covered with grilled cheese, poppy seed cake, cheesecake, bread, smoked cheese … the list goes on and on and I can’t wait! Let me know in the comments section if you have any suggestions for other Polish goodies I should not miss out on. 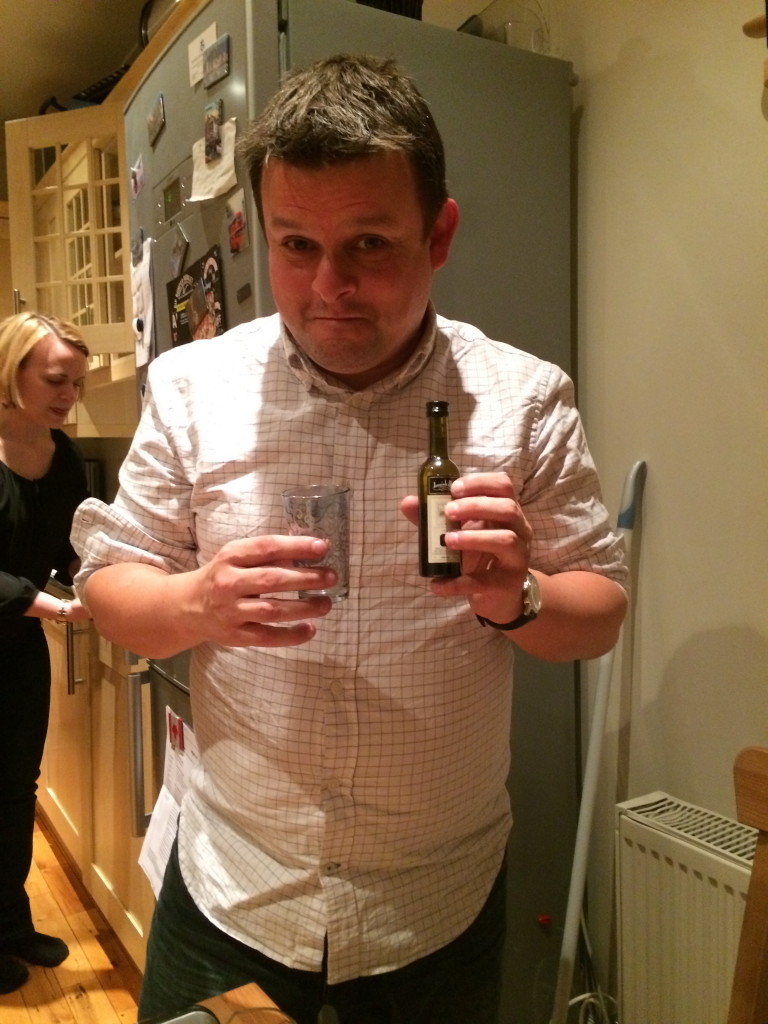 Andrew with his little bottle of Ice wine.