This month, I met my foodie penpal for the first time. Selina from Thrift Street commutes to London every day, so we decided to meet face to face. Selina brought a lovely parcel directly to my office (how’s that for service?!) and it took me seconds to rip it open and examine this month’s goodies.

It turns out that whilst Selina is from Northamptonshire, she is half-Dutch, and so her parcel was a mixture between local and continental. She wrote me a lovely long letter to explain each of her choices, and I really appreciated the effort she went to. She also included some traditional recipes (which she has yet to try) including their famous “Hock and Dough”, which is a pork, potato and onion pie which has been cooked in suet pastry. I am definitely going to try and make it sometime, but as I am feeling a bit fat after Christmas and holidays, I’ll leave it until my weight has calmed down a bit! 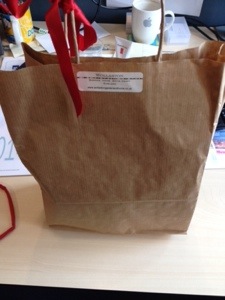 My parcel included some of Selina’s local mayonnaise, which does indeed look homemade as it’s made with rapeseed oil which lends it a beautiful yellow colour. I cracked into it straight away as I was making Flemish stew for dinner, and we all know that with the Belgian frites to accompany the stew you have to have mayonnaise. It was delicious – lovely and peppery from the oil, and thick and unctuous.

Selina also included a jar of beetroot and horseradish chutney, which was a bit of a revelation. She said it’s nice with cheese but in fact it would go with anything, and I’ve had it a couple of times with cold meats and meze platters. It’s the perfect mix of spice and chilli from the horseradish and sweetness from the beetroot.

I didn’t get to try the craft beer Selina chose, as my boyfriend swiped it and guzzled it before I had the chance to try it. He is a bit of a connoisseur of ales (in the sense that he drinks them a lot!) and told me that it was delicious and we should get some more! 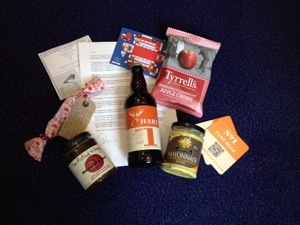 Selina also included her Dutch influence with some apple and cinnamon crisps (for the flavours of Dutch apple pie) and a cork which had been dressed with a little hat and coat – apparently it’s a tradition to pass on the spirit of the wine by sending the cork to someone else. That’s such a gorgeous idea and I would love to do the same, but my little cork friend is so cute he’s not going anywhere – he’ll bring me luck in the kitchen instead!

I was once again in Paris for work, and so this month I picked a range of Parisian goodies for my penpal Drea. She is vegetarian so I parcelled up the following for her:

I hope Drea enjoys her French treats! As always, if you want to join in, speak to Carol-Anne at This is Rock Salt for more information.