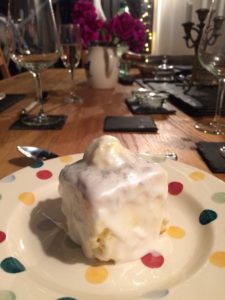 Okay I know I have only just posted my tudor pie (chicken and leek with hot water crust – delicious), but I am catching up before the GBBO ends tomorrow (sob, end of an era as who knows how it will be reincarnated on Channel 4?).

For patisserie week there were the options of savoury palmiers, a savarin cake, or fondant fancies to choose from. Fondant fancies actually appeared as a challenge on the Bake Off a couple of years ago, and I’d been tempted to make them then, but decided they looked like too much hassle. However, I wasn’t keen on the idea of a savarin, nor making my own puff pastry (which I have done before, not entirely successfully), so thought I should bite the fondant fancy bullet.

I have very fond memories of the Mr Kipling variety of fondant fancies which we used to have as a treat when young, although took a pack of them to Paris once for my French colleagues, and they could not hide their disgust at the synthetic buttercream, artificial colouring and tasteless sponge (in their view). Poor Mr Kipling!

I found this recipe for fondant fancies, so slightly adapted it to suit my taste – this is what I did, making nine large cakes – each one makes a pretty, and substantial, dinner party pudding. 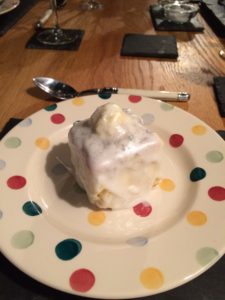 Pre-heat your oven to 160 degrees. Prepare a 20cm square tin by greasing and lining, although I recommend using a silicon dish like I did to avoid sticking.

Mix all of the sponge ingredients in your freestanding mixer or foodmixer until smooth and combined, then spoon into the tin and bake for 40 minutes. Allow to cool then trim off the edges and cut the sponge into nine equal portions. 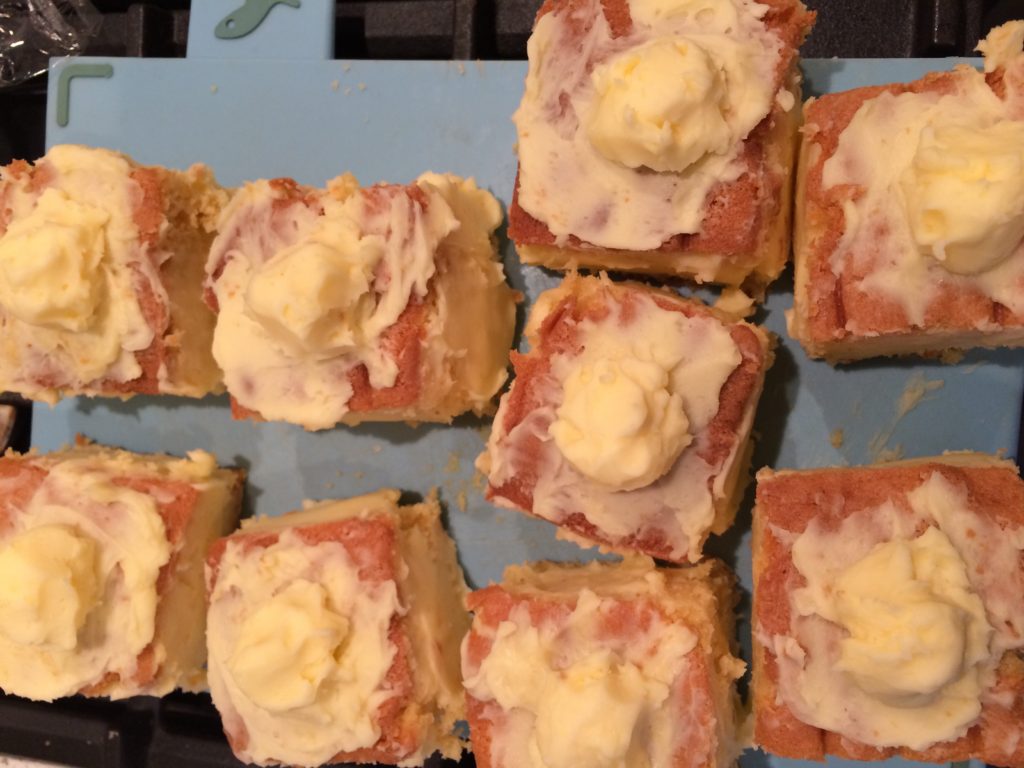 Whisk the buttercream ingredients together until combined, then assemble the cake by splitting each piece of cake in half to be sandwiched with some buttercream. Then spread each side and top of the cake with more buttercream, as smoothly as possible to create a flat crumb coating for the fondant icing (as you will see, I was spectacularly unsuccessful in creating a smooth base!).

Recreate the Mr Kipling look  by adding a mound of buttercream to the top of the cake. 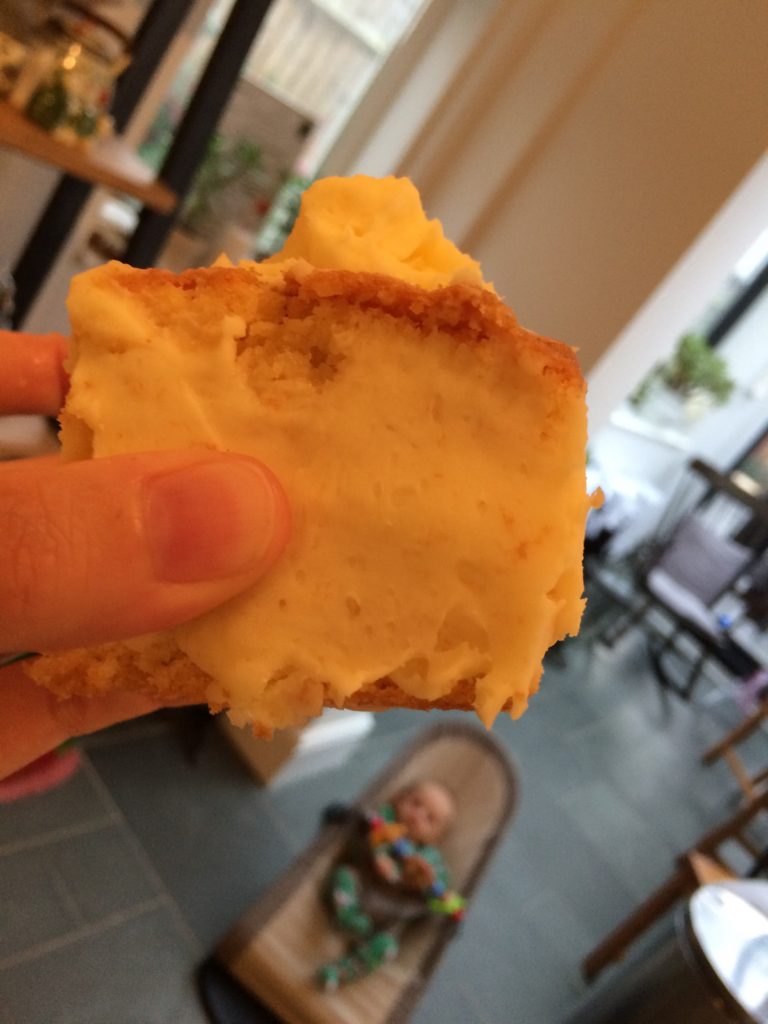 Once all the cakes have been buttercreamed, put them in the fridge to set while you make the fondant.

Don’t be put off by making fondant icing as it’s surprisingly easy as long as you have a freestanding mixer. You just need to chop up the fondant into small pieces and then start to mix with the mixer paddle and slowly add liquid until you have a spoonable consistency for the icing. Rather than using water as my liquid, I used lemon juice, but you could use whichever flavouring takes your fancy. Unfortunately I didn’t have any food colouring for the icing so went with plain white and then sprinkled the finished cake with edible silver dust. 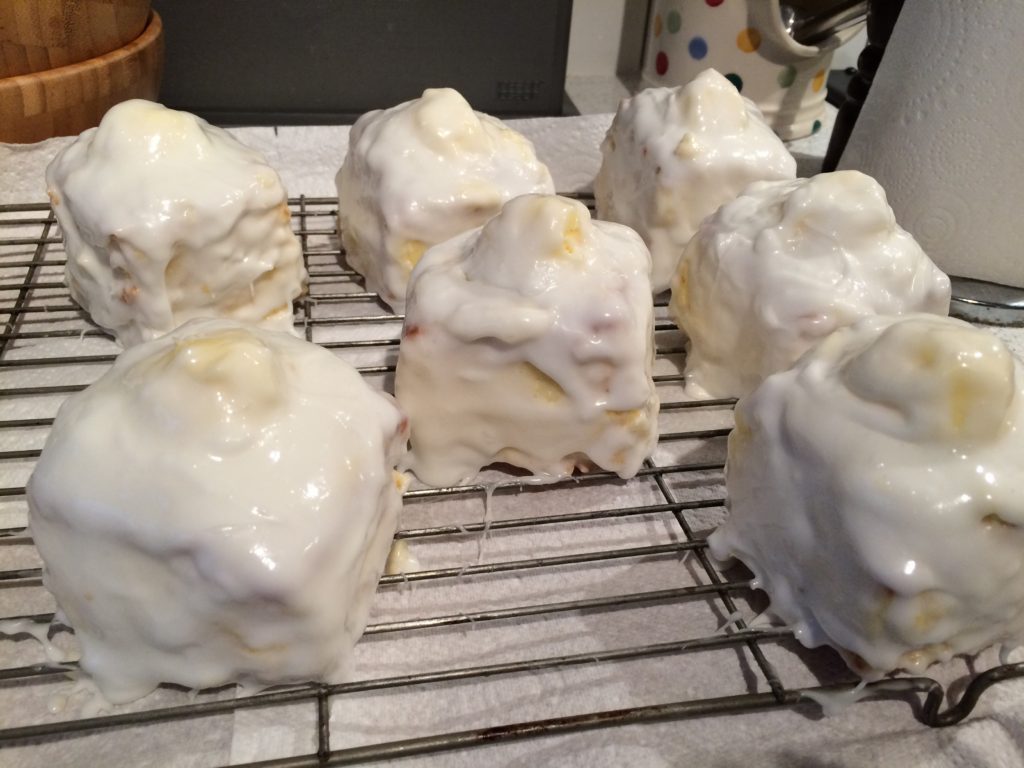 I won’t lie, icing the fondant fancies is a total pain in the arse so be prepared to make a mess. I tried dunking and pouring the icing onto the cake, and ended up doing a combination of both. There’s no hiding the fact that the cakes look a bit of a state, but they did taste very nice.

Would I make fondant fancies again? Absolutely not! See what my fellow bloggers came up with over with Jenny at Mummy Mishaps.