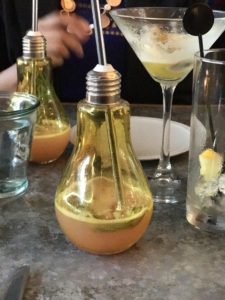 Sometimes when you are getting no sleep, no sleep, and more no sleep, the only answer is to go out and get drunk! Okay, that’s not quite what I did at The Frog Restaurant, but my mummy friends and I did treat ourselves to the tasting menu and drinks pairing, which was quite a lot of alcohol to wash down our delicious food with.

I hadn’t heard of The Frog before, but it turns out I do know the chef – Adam Handling – was a finalist in Masterchef the professionals in 2013, and I remember rooting for him to win.

I love trying out new restaurants, and was intrigued by the menu of The Frog, which has received mixed reviews … however, my friend Jo-Ann who organised our night out assured us all that she had frequented several of Adam’s restaurants – turns out she’s a bit of a (stalker) fan of Adam’s – and his cooking is amazing. I was convinced of this on our evening out.

We started with beef carpaccio with lovage, chilli and grated egg yolk. As you can see it was beautifully presented in a crispy shell (I didn’t actually note what the shell was made of, but it tasted a bit like a prawn cracker so possibly seaweed), and had a lovely combination of textures. I didn’t detect any chilli, but there was an element of smokiness from the barbecue beef. 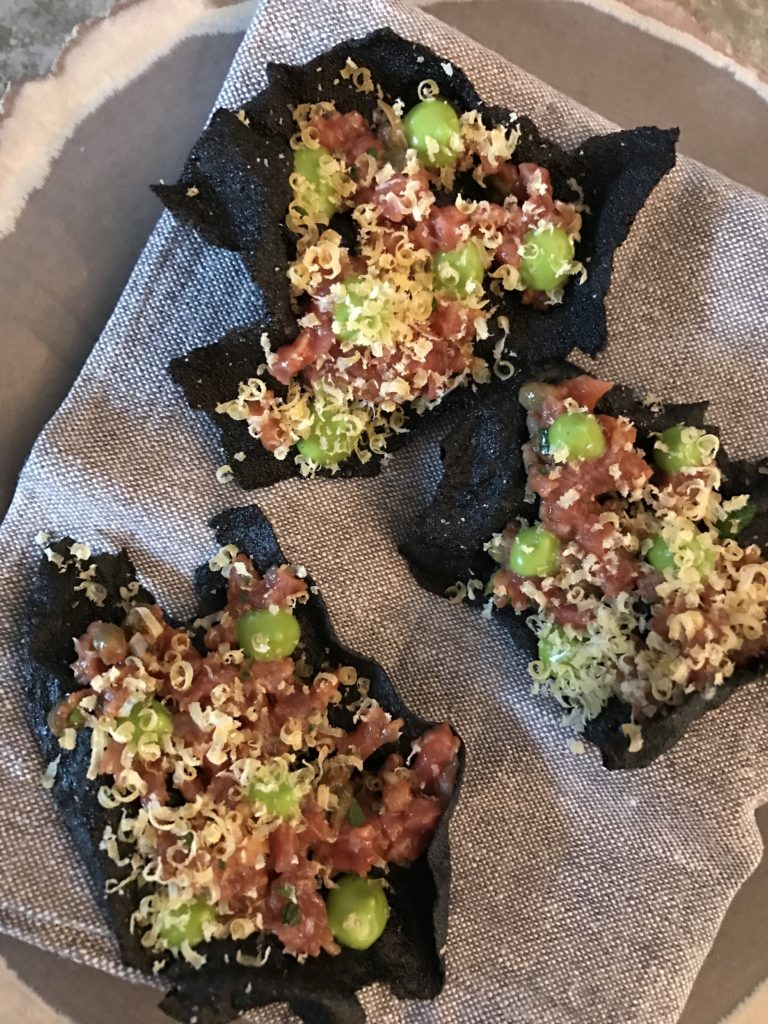 Next up was a tube filled with smoked cod’s roe and topped with creme fraiche and caviar. Taramasalata is one of my favourite things, so this massively appealed to me and I could have eaten ten of them! 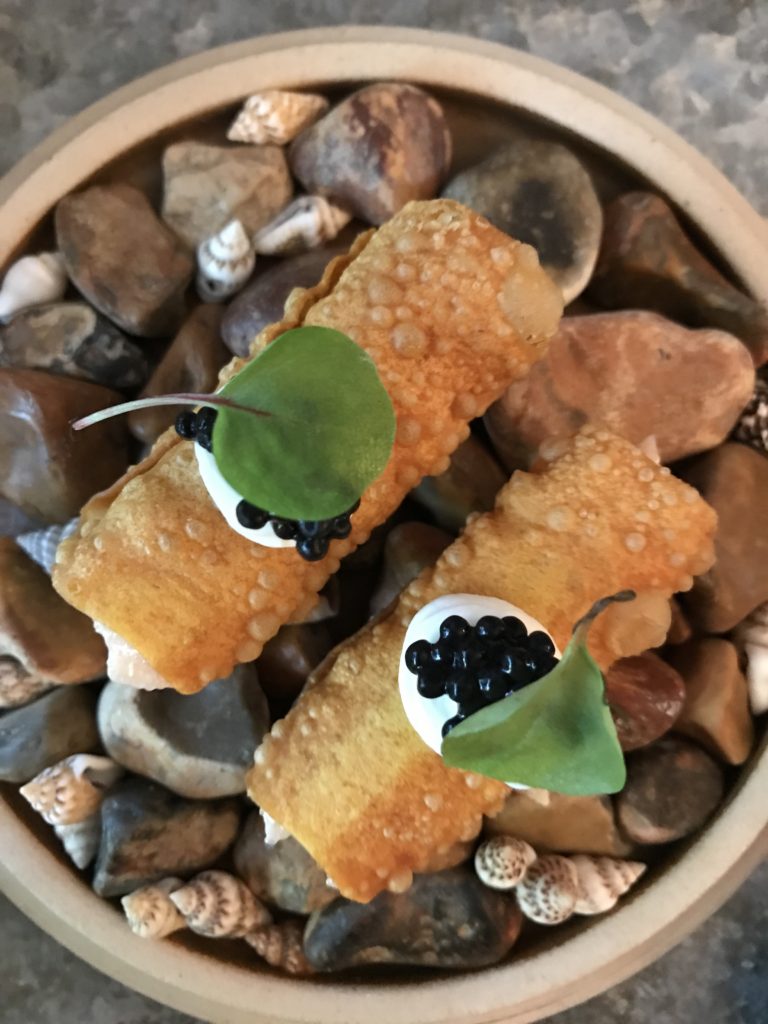 We also received a large portion of homemade sourdough bread with The Frog’s famous chicken butter – think salted butter whipped up with the crispy bits at the bottom of the pan when you roast a chicken – full of umami and creaminess – perfect on warm bread. The butter was scattered with bits of crispy chicken skin too – a real delight. 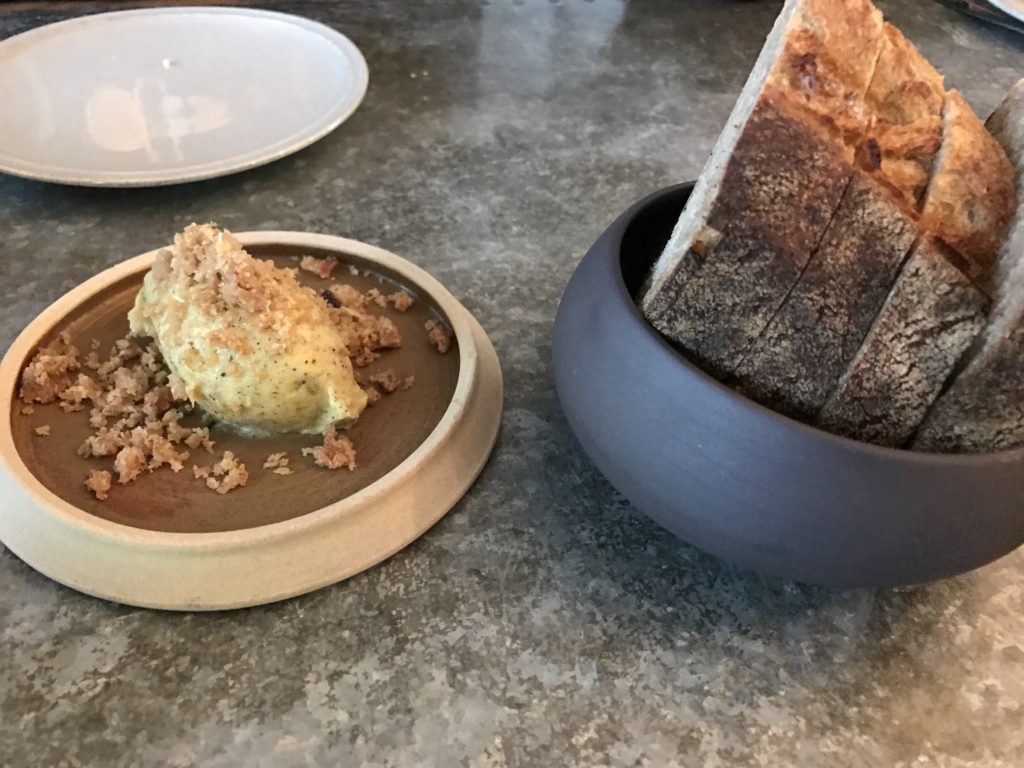 These ‘starters’ were served with a Tom Collins type cocktail (in a lightbulb – weird and not particularly tasty) and a glass of bubbles, and followed by salmon and pickles.

This dish was cubes of cured salmon and thinly sliced pickles and was utterly delicious. The salmon was rich and those sweet pickles cut through the fish beautifully. We had declared this dish our favourite so far (although in fairness we were saying that after each dish), when the next came along. 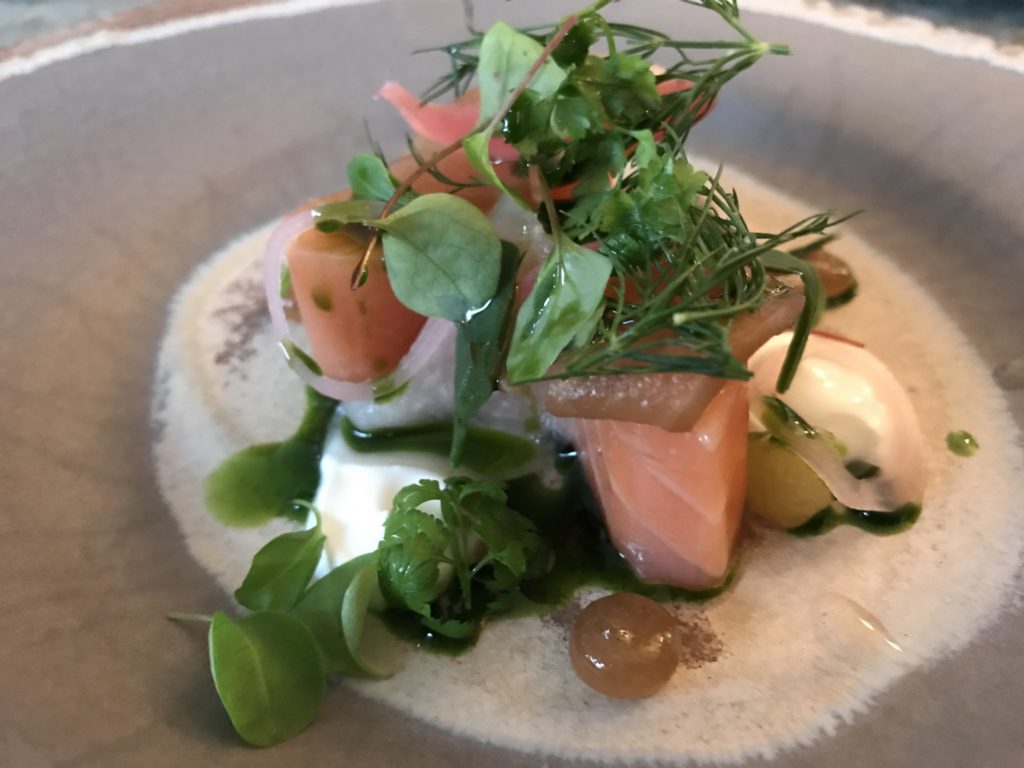 Celeriac mixed with apple, covering a soft egg yolk and spotted with sticky dates, with the unmistakeable flavour of truffle. Although I hate mushrooms I love truffle, and this combination of sweet and sharp celeriac and apple, with soft and sticky yolk and dates was a combination I didn’t expect to like, but actually loved. I assume the yolk had been cooked sous vide as it was soft but not runny. 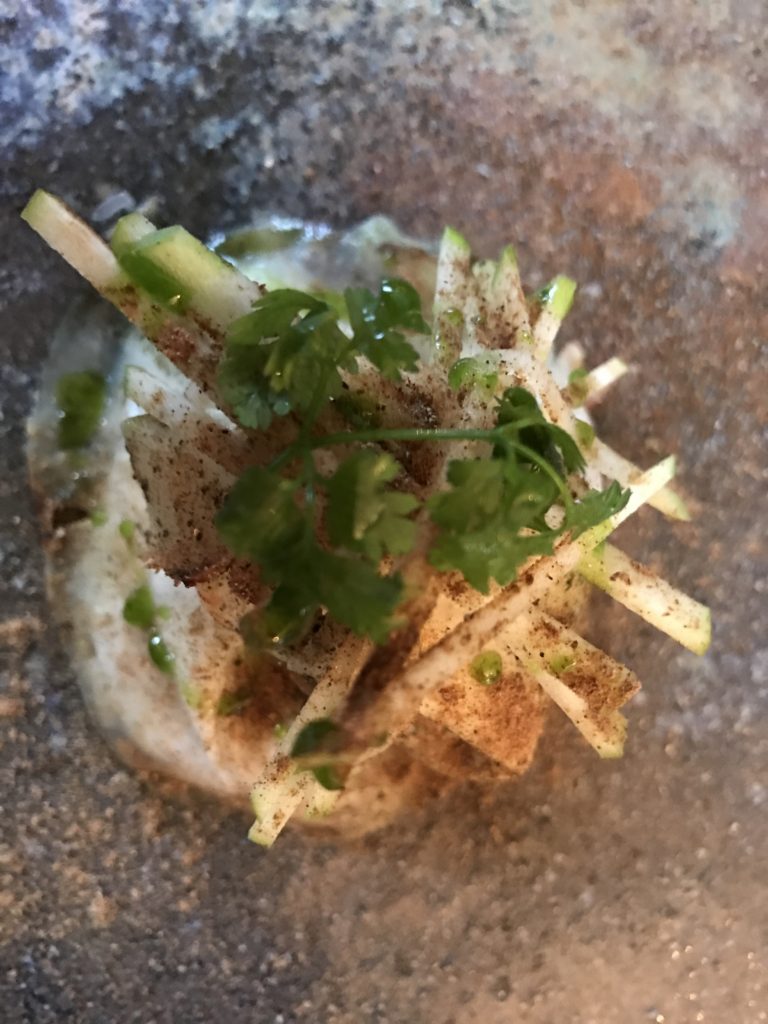 With barely a pause we moved onto cod, crab and seaweed. Small pieces of fried cod were served on a bed of crab bisque, and topped with crispy seaweed. This dish was a let down for me as although the sauce was tasty, I didn’t detect even a hint of crab. 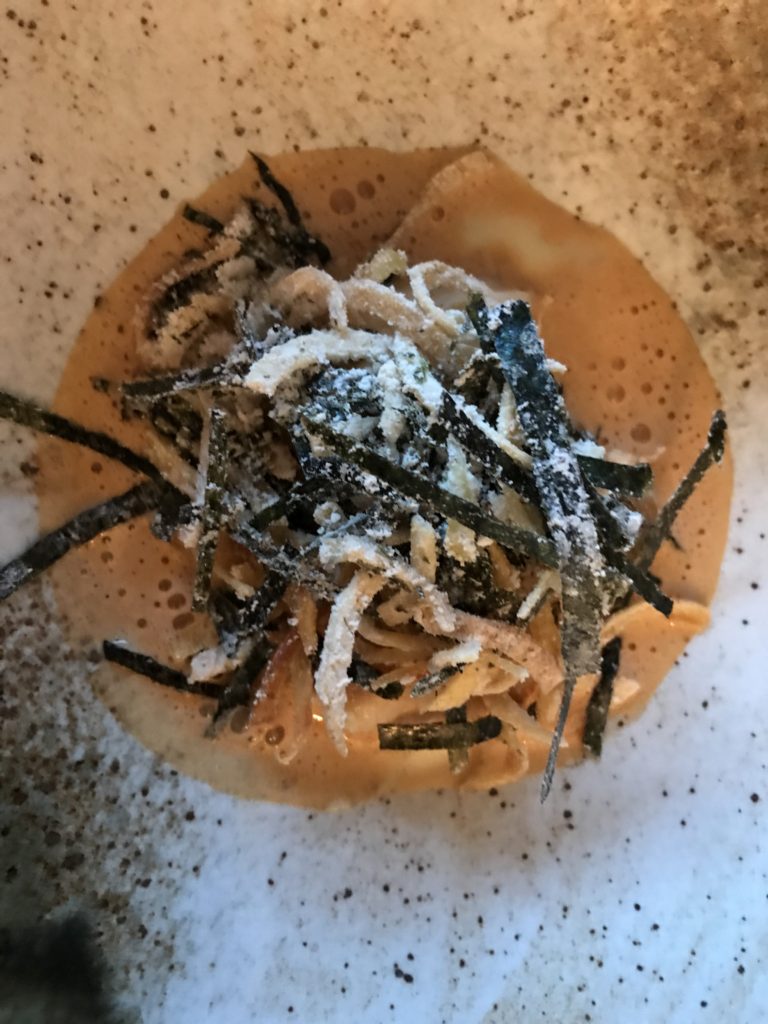 Next on the menu was quail, which I have never tried before. Tonight wasn’t the night to try it either, as instead we were served pork belly with burnt cauliflower. Secretly I was relieved as although the quail was supposed to be served with my two favourite things – asparagus and wild garlic – I was not looking forward to trying it. The pork belly was cooked beautifully, with the fat rendered down into the sticky meat, and the cauliflower was a revelation – caramelised to the point of burnt and sprinkled in a dusting of black powder which I assume was burnt cauliflower too. It sounds horrible but was amazing, and immediately became my favourite dish of the night! 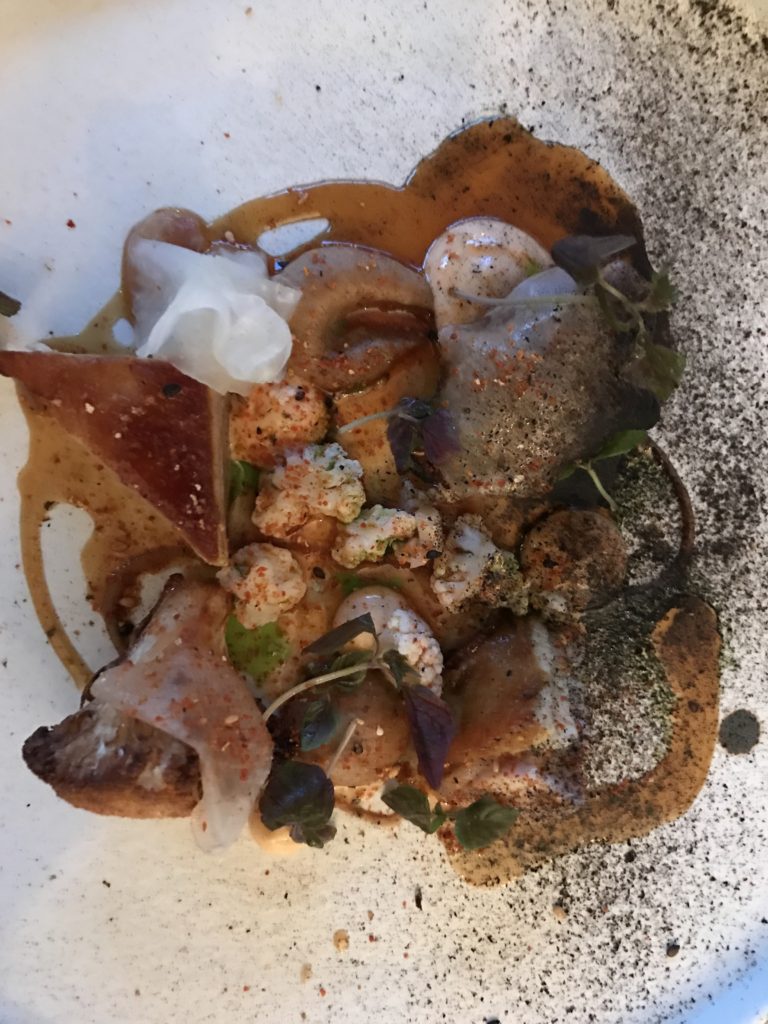 We had a short break before our cheese course came along: cheese doughnuts, which The Frog are famous for. These were another slight disappointment as the doughnuts were incredibly rich (sweet doughnut dough filled with béchamel and deep fried, them very generously drenched in grated parmesan), and almost too hard to eat (a normal portion is two – I genuinely don’t know how anyone would manage more than one, and I am so greedy). 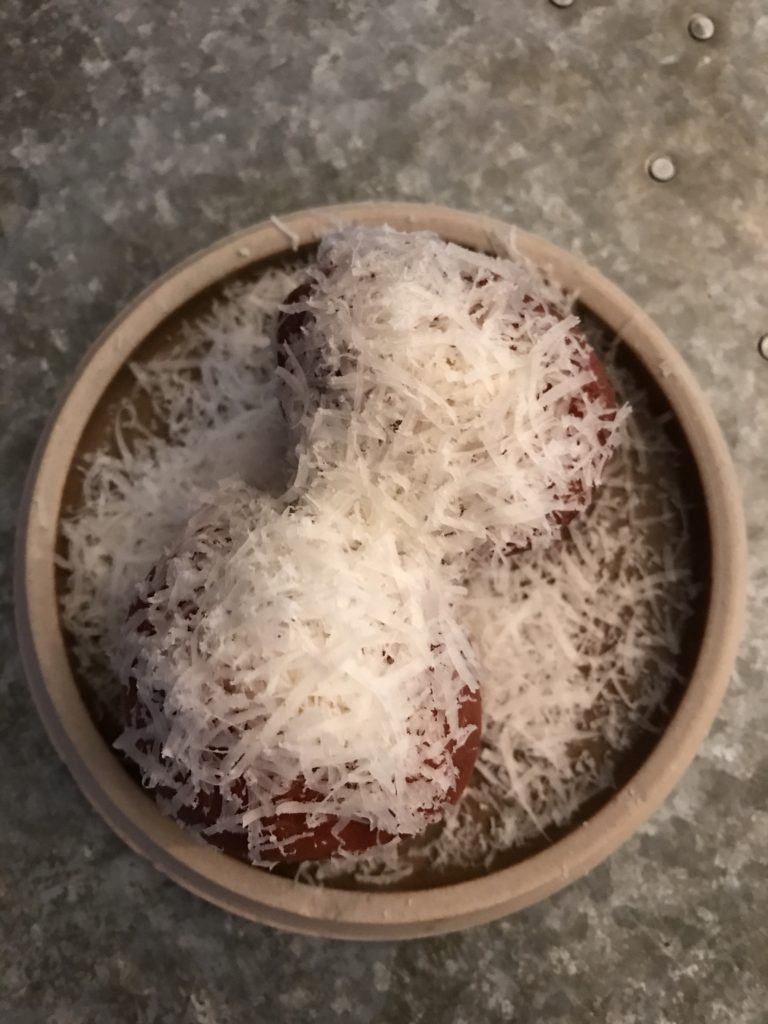 At this point I think another glass of red wine would be appropriate as part of the menu, as I was out of a drink by now, and could have done with some red wine to help the cheese doughnut go down! 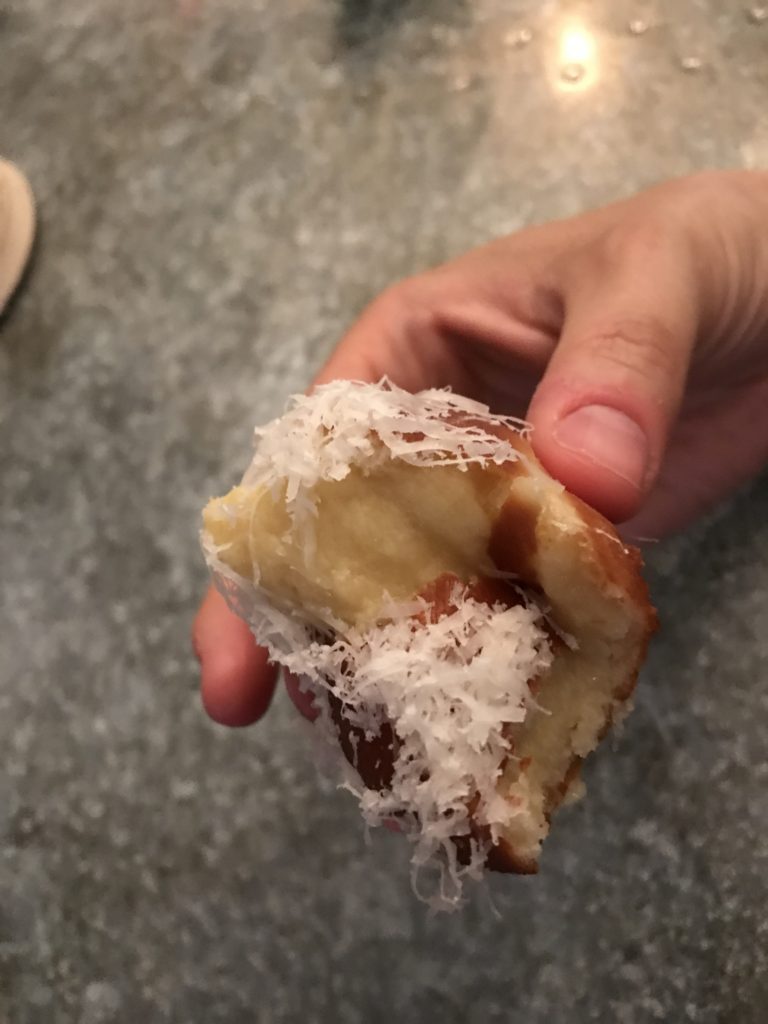 After a break we had our pre-dessert of beetroot. To be honest I don’t really know what this was: some kind of beetroot ice cream, cased in a beetroot tuile biscuit and dredged with beetroot dust … anyway it was delicious, although exceptionally sweet (you would not have it as anything other than a dessert), and finally took away the taste of that rich doughnut. 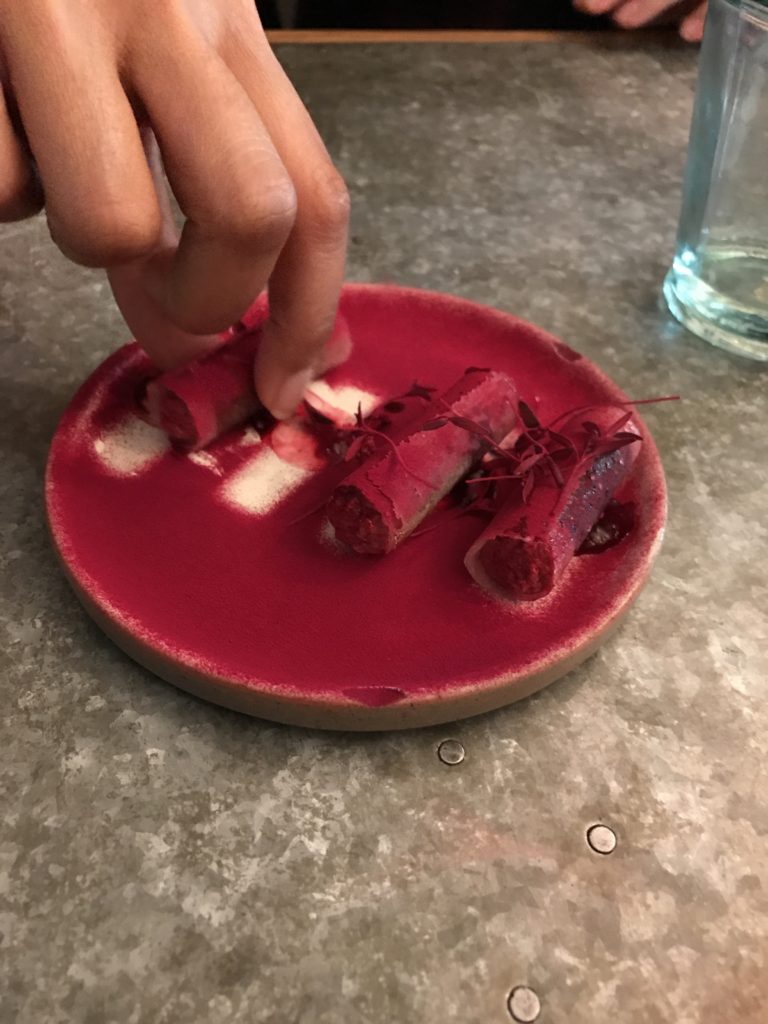 For pudding we could choose out of three different options, and I chose chocolate and cherry. This was a rich chocolate mousse topped with a light whipped cherry foam – very nice and just the right quantity to finish a meal. The other girls all had the strawberry dessert, which was different textures of strawberry, and that looked amazing (and received rave reviews too). 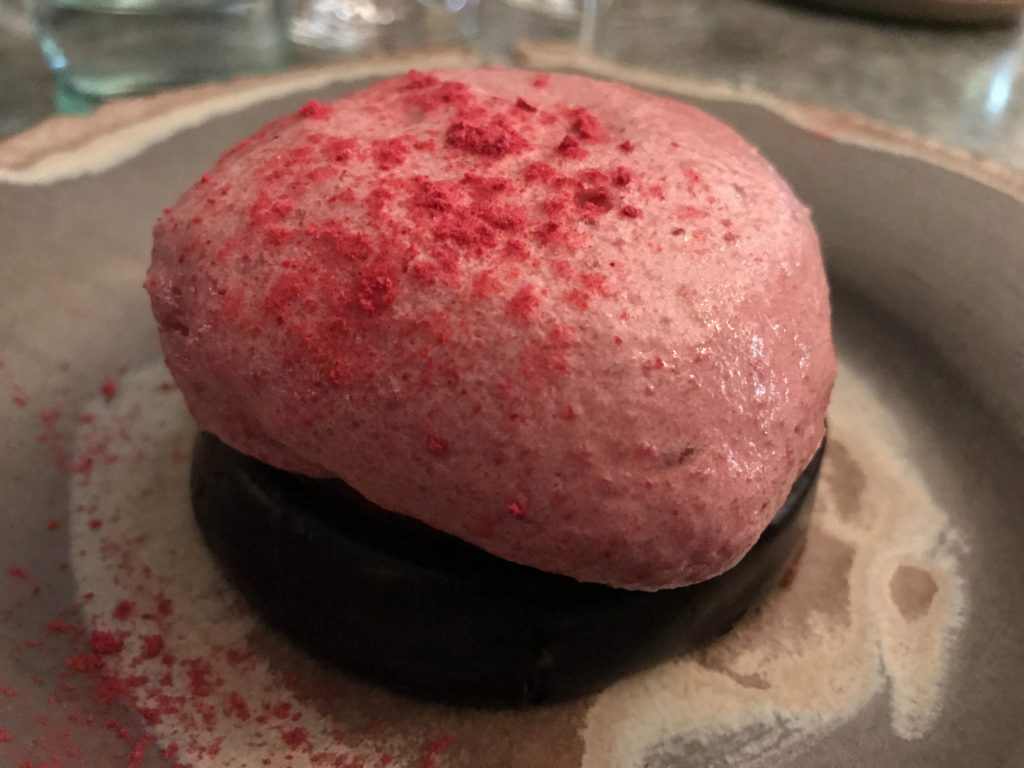 Overall I thought the food at The Frog was excellent, and I would definitely go back. At £55 for the taster menu, I’d say it’s fairly priced for the amount, and quality, of the food. An additional £45 for the drinks is reasonable, although as I mentioned, an extra glass of red would have gone down well with the cheese.

This week’s menu is nowhere near as exciting, but planned as follows:

And then another day off for the bank holiday – woo hoo!!! 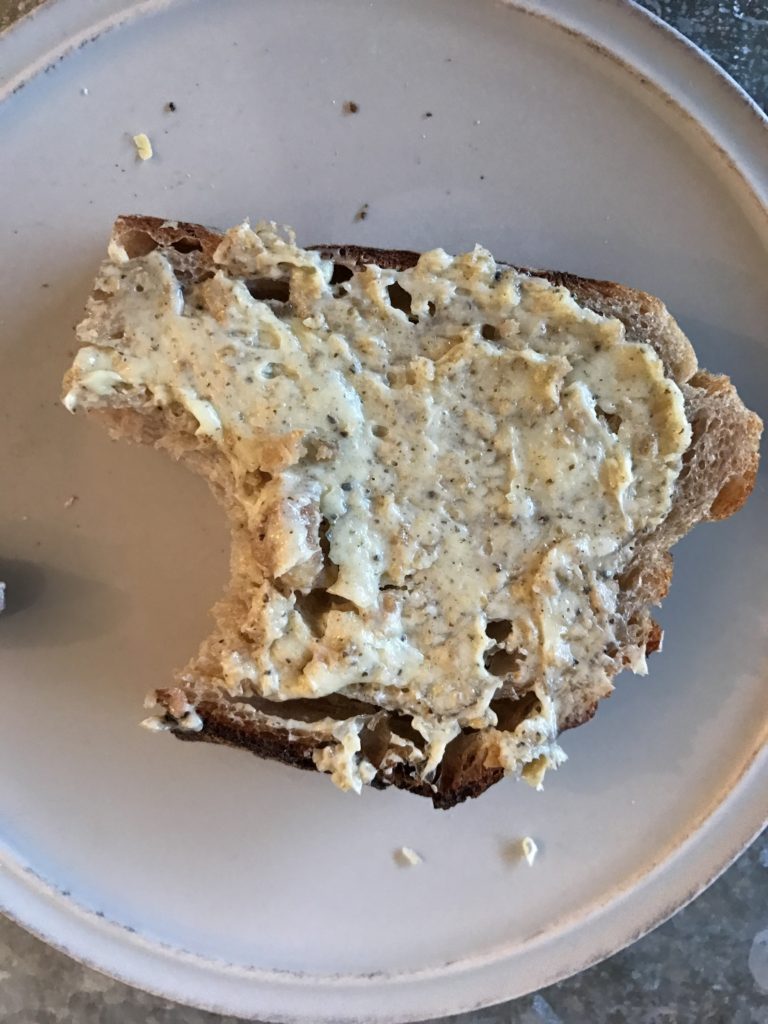