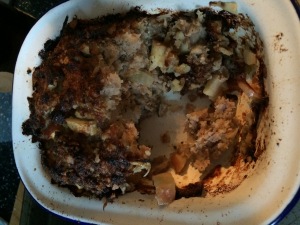 I absolutely love Paxo’s sage and onion stuffing: it’s a happy memory from my childhood to have balls of their stuffing with every roast dinner, and although I now make it in a baking tray instead of rolling it into balls (why risk the third degree burns?!), I always have a box in my cupboard to make for a roast dinner accompaniment.

I even love it ‘raw’, eaten out of the jug after it’s been reconstituted with boiling water. I never scrape all of the stuffing into the baking tray, as I use the jug afterwards to make my (OXO cube) stock to prepare the gravy – the little bits of sage and onion add to the gravy’s flavour when it’s stirred into the meat juices.

So I’ve never been bothered by the idea of making my own stuffing. At Christmas I’ll buy a packet of Paxo’s festive sausagemeat stuffing to make a bit more of an effort, but that’s as far as I’ll go. 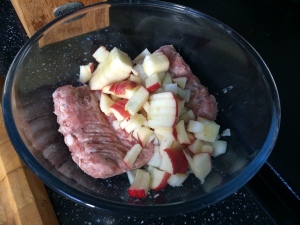 By recently we went to our friend Isi’s for Sunday lunch, and she made the most fabulous stuffing to go with the roast chicken. It sounded so simple to make that I just had to give it a go.

Most importantly, she makes a huge portion of stuffing: this is essential in my view, as no one wants to be the greedy guts who is drooling over the last stuffing ball, so there always must be plenty to go around.

In fact, Isi makes huge portions of everything. For the four adults and two kids she roasted two whole chickens, and she made a big tray of crispy roasties (again, no one wants to be eye-ing up the last roast potato at a dinner party), plus yorkshire puddings. She is a woman after my own heart. 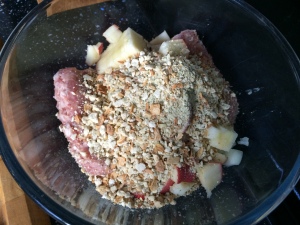 So, back to the stuffing. With a base of sausagemeat the stuffing is rich and juicy, and was padded out by a chopped shallot, chopped apple, and half a packet of my favourite Paxo (Isi had intended to use breadcrumbs but had run out, so ended up using a stuffing mix, which is after all just breadcrumbs and seasonings). Mixed together and baked in the oven, you end up with a delicious flavoursome stuffing to accompany your roast.

I never really fancy the idea of stuffing the neck of the bird with sausagemeat, but I am sure Isi’s recipe would flavour the bird beautifully if you did wish to do that.

I made a portion of Isi’s stuffing when Andrew’s family were over for our pre-Christmas celebrations, and here’s what I did. 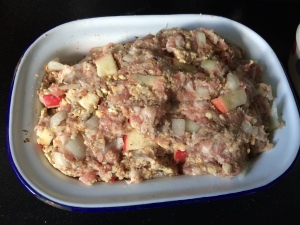 1 450g pack of sausagemeat (I like Waitrose gourmet sausagemeat), a small packet of sage and onion Paxo (85g), 1 onion, 1 apple

Simply mix all of the ingredients together (you’ll need to finely chop the onion and the apple – I didn’t bother peeling the apple) and put into a baking dish. Bake in a pre-heated oven at 180 degrees for 40 minutes.

Serve spoonfuls of stuffing with your roast of choice. I’ll be having it with my roast goose on Thursday! 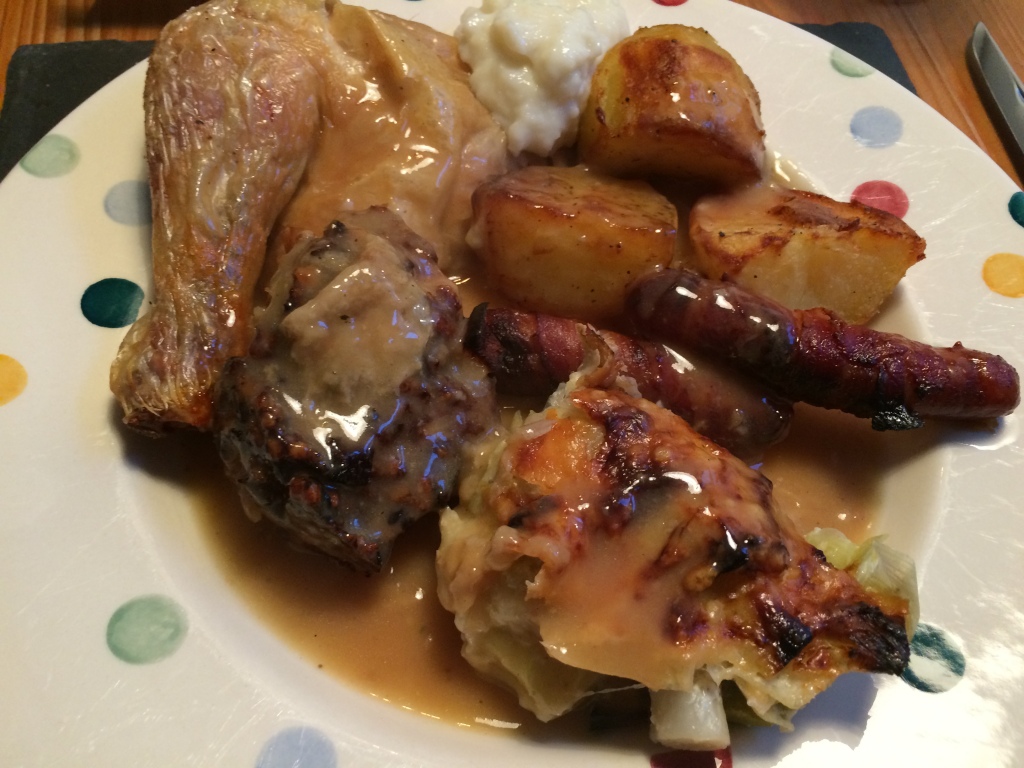