We had friends come over for Sunday lunch a couple of months ago (Sunday lunch is the new BBQ considering the weather in this country, don’t you know!) and it got me to thinking of what my favourite Sunday lunch is.

Actually, it might not be surprising to discover, I like them all. Except roast turkey Christmas dinner, which is my least favourite meal of the year, and why I usually opt for goose (apart from last year when we had a house-full and so I did turkey, and actually it was very nice … I think … I was ill and couldn’t really taste anything but people said it was good, and so I choose to believe them and their empty plates). Anyway, I suppose roast chicken is one of the more boring sunday lunches, although if it’s roasted with lemon and garlic so the meat is moist and the skin is lovely and crunchy then it can be a thing of beauty … especially served with creamed leeks and sage and onion stuffing, and real gravy.

Next runner up out of the traditional roasts is a harder choice, but I think I’ll go for pork. But when roast pork goes wrong, it can go spectacularly wrong. Dry meat, rubbery crackling, insipid apple sauce – the horrors. I’ll rarely choose roast pork in a restaurant simply because crackly-ness crackling is one of life’s greatest disappointments (at the time it is … of course there are things worse in the scheme of things, but not many).

So second best in my league table of roasts would probably be roast beef. Again, lots of opportunities for error which can lead to disappointment at the table … including over-cooked beef (I like mine rare and bloody) and – true disaster – lack of yorkshire pudding. That, dear reader(s), would put any restaurant (or friend) on a black-list. In my view even Aunt Bessie yorkies aren’t good enough, and I say that as someone who struggles to make a decent yorkie. The shop bought ones are too crunchy and hard – I like a bit of stodge in my yorkie.

So it’s obvious which one is my favourite – roast lamb. Shoulder is probably my preference but I do like roast leg. Slow roasted for preference but I like it rare as long as there is a satisfying crunch to the rendered fat and skin. I do have an overwhelming fondness for mint jelly as well. Not mint sauce, which I find too vinegary, but mint jelly which is lovely and sweet and melts into the gravy very satisfyingly. It rather disgusts Andrew, but I adore it … especially with a slice of bread to mop up the minty gravy at the end!

But the best of all? My favourite roast lamb but with ALL the trimmings: yorkshire pudding and stuffing, plus creamed leeks, roast potatoes (in goose fat) and a big fat sugary pudding to wash it all down. So that’s what I did when Stu and Carmen came over for dinner.

I came across a recipe for slow roast lamb on one of the Hairy Bikers’ food tour programmes. They went to Wales and cooked at The Hardwick pub in Abergavenney with Stephen Terry (a chef I love as he gave up his Michelin stars for honest unfussy food and seems like a nice chap too, and his restaurant which I also love and hope to go back to soon – if you are ever in that neck of the woods then give it a go). You need to cook a whole shoulder for a good 6-8 hours though, so this dish does require some advance thought. I served the lamb, which becomes sticky and tender and falls off the bone, with a rich gravy made from the juices and red wine, plus my trimmings.

I struggled to decide what to make for pudding as the lamb is extremely rich, but I eventually stumbled across a recipe for lemon posset, which I had never made before. It sounded simple (good) and not too heavy (even better) and a good way of using up some lemons I had in the fruit bowl. I decided to make oaty shortbread with it as I am addicted to that combination of salty, buttery, oaty, sugar in a biscuit, and don’t hesitate to use any excuse I can find to make them.

Washed down with plenty of red wine, this is a lovely combination to while away a Sunday afternoon, and as the pudding can be prepared in advance there’s not even that much washing up! 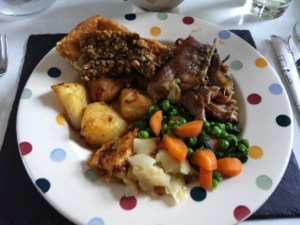 Firstly you need to brown the lamb shoulder all over. Do take the time to do this because the meat cooks very slowly it doesn’t really take on a roasted colour if it is not browned first. Then put the browned meat into a large roasting tin and make little slots into the lamb with a knife. Poke in lumps of garlic and anchovy, or rub it into the skin if you prefer (you can leave the anchovy whole in that case but crush the garlic). I used a whole tin of anchovies and a whole bulb of garlic but use less garlic if you are not such a fan. Poke some rosemary stalks out of the holes or take off the leaves and sprinkle onto the lamb as well. Then add some stock (I just made some using a beef oxo) to the bottom of the baking tray – just enough to cover the bottom with about a cm of liquid as it helps to steam the meat and form a gravy. You might need to keep topping up the liquid throughout the cooking period, especially as you get closer to the end of the cooking time.

Double wrap the meat with tinfoil and cook at around 150 degrees for 8 hours, although keep checking after 6 hours. It’s ready when you see the meat start to come away from the bone – the idea is that you can pull the meat away from the bone with no resistance. I am sure a bit longer in the oven wouldn’t hurt, and equally after around 6 hours I think you could get away with turning the oven up a bit to speed things up if you needed to.

Once ready, allow the meat to rest while you get on with the other goodies, including the gravy which I make with the meat juices, some flour to form a roux, and then red wine and stock.

Halve lengthways and then thinly slice the leeks and sautee them lightly in butter and garlic (half a teaspoon of lazy garlic or half a bulb, crushed) – as soon as they are soft, stir in a splash of double cream so that the leeks are coated but not drowning in liquid. Stir in the thyme, salt and lots of black pepper and put in a baking dish. Cover with grated cheese and then bake in the oven until the cheese is melted and bubbly. You can cook the leeks in advance and just add the cheese and bake it 2o minutes before you are ready to eat.

A healthier option would be to cook the sliced leeks in water and drain them, then stir in some low fat cream cheese and garlic. Add the herbs, salt and pepper and then bake (preferably with some grated cheese still). 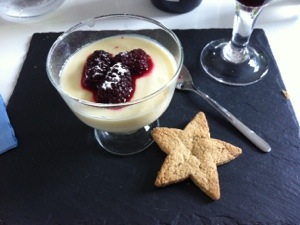 Lemon posset – serves 4 (may serve more but mine boiled over and a lot of it served only the hob. It’s a bugger to clean off so be more careful than me)

Put the double cream and sugar in a saucepan and stir. Bring to the boil and allow to boil vigorously for 3 minutes (don’t allow it to boil over) and then take off the heat and allow to cool. Once cool, whisk in the lemon juice and zest. Pour into serving glasses (four or six, depending on the extent of your kitchen mishaps or how greedy you are) and allow to chill for at least 3 hours.

That’s seriously it with the lemon posset. I am not entirely sure why that combination of ingredients / boiling / allowing to cool magically turns it into a thick mixture with the consistency of greek yoghurt but it really does work, and it tastes fantastic. I served mine with biscuits and some berries. Delicious. Although I did curse lemon posset for two days until the ignition on my hob finally started working again.

The oaty biscuit recipe can be found on a previous blog entry here.

4 Replies to “Lambs and lemons”