Yep, you can probably guess what happens when you do something as thick as that … especially when you do something like that on the hottest day of the year so far (okay, I appreciate that doesn’t normally mean much here in the UK but it was pushing 30 degrees last week so it was actually HOT).

My fridge door beeps constantly after you have left the door open for about 15 seconds (which is really annoying when you are making salad and it insistently beeps at you until you eventually slam the bloody door shut) but this irritating beeping doesn’t apparently work for the freezer door (where, I would suggest to Hotpoint, it would be a lot more useful). Although in fact it does beep when you get home from work (and, ahem, the pub) 15 hours after you left the door open. Then it beeps. Then of course it is too late, as you have a puddle of water on the floor to welcome you, and a random selection of slightly defrosted food which you have to cook over the next couple of days so that you don’t end up wasting it all.

So today’s blog post is about the exciting meals I made last week with a completely random selection of ingredients. I always love the invention test on Masterchef, and so I tried to see this week (after I had got over my strop) as my special version of the invention test, where I could choose additional ingredients from my cupboards … and / or the local Tesco metro, and where I wouldn’t have to get a little bit sick when Gregg Wallace sucks the top coating off the cutlery while tasting genius meals (although I didn’t actually make any sweet stuff, so my spoons would have been safe).

First, breaded chicken from M&S. Well, that was so easy that Andrew was quite capable of cooking it for 25 minutes in the oven so that I could have a piece in a roll with burger relish when I got back from my marathon (well, 5.6k JPMorgan Challenge run). Mmmm, it was very tasty actually – like a reasonably healthy / not swimming in grease KFC.

The next night’s dinner wasn’t entirely appropriate for the weather (understatement) – faggots from our last trip to Wales, from Cyril the butcher. I love them, but wow they were not ideal for a boiling hot June evening. However, you can just bung them in the oven for 40 minutes and forget about them, which gave me time to cook a Thai red beef curry (braising steak – and I really could not face a stew in this weather) and a chicken, bacon and potato concoction to use up chicken breasts and streaky bacon. I also made fairy cakes AND mini victoria sponges for Andrew’s birthday (I am such a great girlfriend, with absolutely no ulterior motive of wanting to eat the cakes myself).

So, to the recipes.

Well, not really a recipe – basically you put all of the ingredients except the salt, pepper and coriander into a saucepan and stir. Bring to the boil and stir again and leave to simmer for at least one hour so that the meat is tender. Add salt and pepper to taste and serve with chopped coriander sprinkled on top.

I worked this out as 9pp for any weightwatchers amongst you – quite high points so I served mine with veg rather than rice. It was delicious, although a tad spicy for my delicate gob! 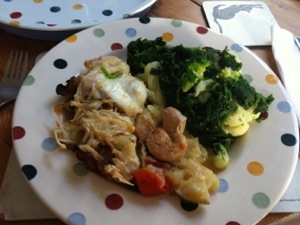 Firstly slice the potatoes and cook them in salted water until tender. While they drain, use the same pan to sautee the garlic and onions in a drizzle of olive oil until softened. Add the diced chicken breast and pieces of bacon (I sliced mine like little lardons), leeks and peppers. Sprinkle in the oxo cube and the thyme and then add a little water so there is a light sauce coating the chicken mixture. Cook for 5 minutes until the chicken is cooked through and then stir the cooked potatoes into the mixture. Season with salt and pepper and put into a casserole dish. You can either bake this in the oven for 20 minutes (170 degrees) until the top is golden or firstly top with grated cheese and then bake in the oven. I chose the latter because I had some cheese from Denmark to use up. Delicious served with veg or salad.

7pp for a portion without cheese.

Beat together all of the above ingredients except the milk in a food processor or freestanding mixer. Once combined, add a splash of milk to slightly loosen the mixture. Divide the mixture equally directly into the holes in a large muffin tin (my mixture made 6, or it would make 12 fairy cakes). Bake for around 20 minutes in a pre-heated oven, 165 degrees. They are ready when a skewer comes out clean. Allow to cool and then slice in half and spread some jam on the bottom half and top with whipped cream. Sprinkle with icing sugar, add a candle and serve!

Best not to try and work out the points for these unless you want to be depressed … but I would estimate at around 12pp per cake.