Find out more about my GBBO Challenge.

Angel food cake? I had never, ever heard of it until the first episode of The Great British Bake Off 2013. After a bit of googling, I decided it looked too difficult to make (and expensive to make – 10 eggs!) and so looked at sandwich cake options instead.

In fact, I was very close to choosing to make a Swedish sandwich cake (basically real sandwiches made to look like a cake), but the appeal of a new cake tin finally swung me back towards an angel food cake. £15 spent on Amazon later, decision made. I know, they see people like me coming.

As I am trying to be a good little weightwatcher at the moment, a fat free cake did appeal quite strongly. Healthy cake?! Plus Andrew likes quite plain cakes, so if I was going to get him to help me eat it, I would have to keep it simple. Although if it’s fat free, I can probably just eat it all on my own …

When BBC Food released the angel food cake recipe to accompany the first episode, and this included a lemon curd recipe to use up the egg yolks as well, I was convinced. I started boasting to my colleagues that they might get some cake to try if they were nice to me. Then the (frankly dangerous looking) cake tin arrived on Thursday and I had my bank holiday weekend activity sorted.

After my issues with Nigella’s flourless Nutella cake, I was a bit worried that I’d struggle to bake a cake which relies almost solely on eggs as its raising agent. Actually, I needn’t have worried – it’s a surprisingly easy cake to make (easier for me than the Bake Off contestants because I had the benefit of the recipe and watching their mistakes on the show, and also I know the difference between salt and sugar). Making it was the first time I have EVER sieved flour to bake a cake. I know – I am so lazy.

I also followed the recipe for making lemon curd, but I didn’t bother finishing the cake as shown on the recipe (‘icing’ it with chantilly cream) as it wasn’t going to be eaten straight away and I was worried the cream would spoil on the cake – instead I decided to serve cream, lemon curd and passion fruit pulp on the side. 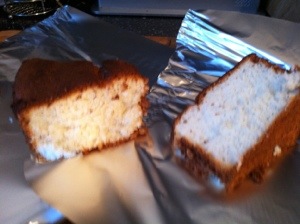 My verdict? Easy to make with a beautiful light texture, but there’s a reason why fat is included in most cake recipes – it makes them moister and tastier. I’m glad I made it, and I am sure I will again (I have to make the most of the new tin!), but the texture of the cake was too much like pannetone or slightly dry bread for my liking, so I don’t think it will ever be a favourite. It’s such a pretty pure white inside though – the appearance of it is very striking. I tried another slice the day after making it (purely because I am dedicated to bringing you a good story on this blog – not because I am greedy AT ALL), and without cream or lemon curd it was surprisingly tasty, and I warmed to the marshmallow texture. And again, I was struck by how pretty the white cake is. Lemony lovely-ness. Hmmmm, maybe I do like it quite a lot after all. 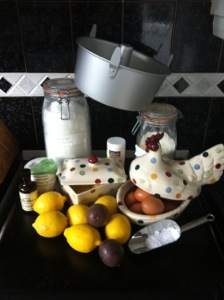 Sift the flour and 100g caster sugar together and set aside while you whisk the egg whites until they are frothy (30 seconds or so in the kitchen aid). Then add the zest of two lemons (and a bit of grated knuckle, obviously), a teaspoon of lemon juice, cream of tartar and salt and whisk until the eggs start to form soft peaks (another minute). Keep the whisk going while you slowly add 200g of caster sugar to make a firm not stiff meringue (another minute in the kitchen aid, if that).

Fold in 1/3 of the flour and sugar mixture gently. Once combined, add the remaining 2/3. Keep folding gently – I thought it would never incorporate without all the air disappearing, but in fact the sugary eggs were surprisingly robust, so I don’t think you need to worry too much. 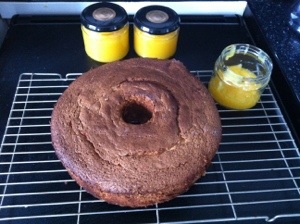 You then transfer the batter to your UNGREASED angel food tin (as the batter will ‘climb’ the tin) and bake it in a preheated 180 degree oven for 40 minutes (mine was ready exactly then – you just need a skewer to come out clean to know it’s ready). I didn’t dare open the oven door while the cake was cooking as I had in mind it would collapse like a souffle. I don’t know if it really is that delicate but you do have to turn the cake upside down as soon as it comes out of the oven so that gravity doesn’t crush the cake (it’s such a fussy little thing). That’s why the tin has those pokey little legs which stab you when you are carrying the tin home from work …

You have to leave it upside down in the tin for at least an hour, then run a knife around the side of the tin and the cake should slide out. It’s quite fiddly to release the cake from the bottom of the tin so be careful.

Anyway, while the cake is cooking you can make the lemon curd, which is also simple but does require attention. Those 10 egg yolks need to be mixed in a saucepan with 400g sugar (I know – makes up for the lack of fat in the cake, doesn’t it?!), the juice of 4 lemons, and the zest of 2 lemons (and no more knuckle hopefully), over a low heat for a good 5 minutes until the curd thickens like a custard. I guess if the eggs over-heated they would scramble, so keep the mixture moving, and once the curd coats the back of a spoon, remove from the heat and stir in the cubed butter. It immediately thickens and you can then pour it into jars. My mixture made 2.5 salsa jar-sized pots of lemon curd. It keeps for a few weeks in the fridge as long as you use sterilised jars.

I served my slices of cake (which are a beautiful pristine white inside) with a dollop of chantilly cream, a dollop of lemon curd, and the pulp of half a passion fruit. Very pretty.

Week 2’s technical challenge is apparently English breakfast muffins and I have a fantastic recipe for those so I am looking forward to that challenge. I will be a winner!