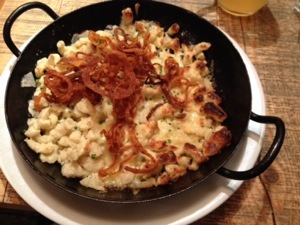 Charlotte, Jo and I did of course have several options for the first letter of our Alphabet Adventures (AA), but we wanted to choose somewhere a bit less obvious than Argentina or America. I remember visiting an Austrian deli in Smithfield called Kipferl, and when I googled it I was pleased to discover that they now had a whole restaurant in Angel. And then when I looked at the menu page, I knew we had the location for our first AA sorted. Unsurprisingly, Charlotte and Jo didn’t object.

Kipferl is hidden away in Camden Passage, around 5 minutes walk from Angel tube station. There is a cafe area at the front which showcases all the delicious cakes and biscuits available, along with shelves stocked with Austrian goodies such as sauerkraut, cornichons, pumpkin oil, spetzle noodles, bread (supplied by the Celtic Baker, which I recently came across at our local Myddleton Road market, when I bought a loaf of tasty – and substantial – seeded sourdough), and Austrian wheat beer (I took one home for Andrew).

Further back is the restaurant area, where I waited for the girls, fortified with an apple juice mixed with sparkling water (I didn’t fancy the idea of coke mixed with fizzy orange – that sounds wrong!). Despite my stinking cold (hence no booze) I could still smell the food coming past me, and was drooling over the menu.

There’s a small selection of starters and sides, and I was tempted by the smoked trout with rye bread and cranberry horseradish, but we all agreed to hold off on starters to save room for cake (see why we are friends?). I’m glad we made that decision, because Kipferl‘s portions are nothing if not hearty, although they did still offer us a little complimentary starter of …. well, I don’t know exactly what they were … some kind of pancake wrap with salmon in one and beef and horseradish in the others. Whatever they were, they tasted good.

Jo and I both chose the kasespatzle – a dish of homemade noodles mixed with organic mountain cheese. I would have happily eaten anything on the menu (they even had a sausage menu – no way would Andrew be able to look past that!), but as soon as I saw the noodles online I knew they would be my choice. I had never eaten them before – but I was sure I had seen them cooked on tv, where quite a wet dough is passed through the holes in a colander directly into a pan of boiling water, and when these little noodles float to the top of the pan they are ready.

So I knew not to expect long Asian style noodles, but I didn’t really imagine what we got, which were masses of tiny, spongy noodles (a bit like baby bread dumplings in terms of texture), mixed with a cheese sauce and then covered with loads more grated cheese which had been grilled so it was all melted and bubbly, and then topped with crispy fried onions. The cheesy smell reminded me of raclette in Switzerland, and it tasted like a gruyere type of cheese.

I love gruyere cheese, having visited the little town of Gruyere in Switzerland once (on the Swiss Chocolate Train – best day out EVER!). We went to the cheese factory where I tasted three different aged cheeses and then had more for lunch, followed by Gruyere’s clotted cream with raspberries for pudding. Then we went to Broc to see the Cailler chocolate factory where at the end I was left in a room full of chocolate and was told I could eat as much as I wanted for free, but couldn’t take any with me. After spending 10 minutes or so there, I am not sure if I have ever felt so sick, before or since. I remember leaving the factory and waiting for the chocolate train, smelling the chocolatey air of Broc, wishing I had not been such a pig, while my tummy struggled to digest copious quantities of cheese, cream and chocolate. I’d go back and do it again in a second though.

Anyway, back to Kipferl. Gooey, strong cheese is not Charlotte’s thing, so she opted for the Hunters Schnitzel, made with chicken instead of veal. Her schnitzel covered almost the whole plate (that’s the kind of portion I like) and was served with boiled potatoes, plus a side plate of potato salad (don’t try this if you are following Atkins) and salad. Jo and I also had salad sides with our cheesy concoction, and the salads were dressed with dark green pumpkin seed oil and pumpkin seeds, which kind of felt like it could only be doing good things for our insides.

Verdict – utterly delicious. Succulent chicken for the schnitzel, which was not at all greasy. Jo and I inhaled our cheese noodles impressively quickly considering the huge portion we had. I loved that our noodles were served in a skillet and so bits of the cheese had gone crispy whereas other bits were all soggy and gooey. Less greedy people would have said enough was enough, and paid up and left. Not us – we had seen the cakes for sale and were intent on staying the distance and having pudding as well.

So, after a quick recce at the cake counter, I decided on Sachertorte, which I had been desperate to try since seeing it made on GBBO last year as one of the technical challenges. Charlotte went for Apple Strudel, and Jo bravely chose the Kaiserschmarren – described as thick pancakes shredded and served with raisins and cherries. Charlotte and I couldn’t resist a portion of schlag with ours (cream – titter), and we also had teas and Austrian coffee to help the sweetness go down.

I always imagine that Sachertorte could be incredibly disappointing to eat, as the light but rich chocolate cake is layered with apricot jam and then topped with a rich dark chocolate ganache. I wasn’t sure if I would like the mixture of fruit and chocolate but Kipferl‘s cake was light and airy but intensely chocolatey, and you could still taste the apricot but in a way that really complimented the rich cake. I am glad the waiter suggested having schlag (hehehe) with it, as the cake was very rich … but light enough that I probably could have managed another slice if the cake had been in easy reach of my greedy fingers in my kitchen, instead of in a restaurant, surrounded by strangers who would judge me for being a pig.

Charlotte’s strudel was a hearty lump of apple and pastry – very dense with fruit and wrapped in handmade puff pastry. She also had schlag (ha!) with hers, and rated it delicious but impossible to finish the last two bites because she was totally full. Now that’s never stopped me finishing a pudding, but her schnitzel was massive so I will let her off this time. I always think fruity puddings are a bit of a cop-out because they are practically the healthy option (same as salads – why bother on a night of gluttony?) but Charlotte’s strudel has made me change my mind on that point. 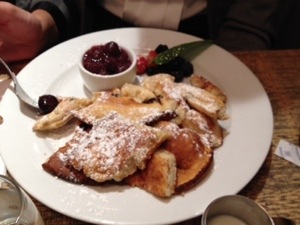 Jo picked the best pudding though, and the one I’ll be having when I go back to Kipferl (which I definitely will) – a huge pile of fluffy pancakes, covered in icing sugar and served with a bowl of morello cherry compote and berries. Frankly I am stunned that Jo made it through the entire plate (well, she did have help from Charlotte and me as of course we had to try a little bit …), as she’s only little, but she did it, and loved it. I think I’d like some schlag (couldn’t resist, sorry) or ice cream with it to wet the pudding a bit though.

So, for 3 main courses, 3 puddings, 5 soft drinks, 2 coffees and 1 tea, the total bill came to just over £70 without service. Considering the size of the portions and the quality of the ingredients and cooking, I’d say that represents good value for money and I’d definitely go  back for more. In fact, each of us left with a little goodie for our other halves (what fantastic girlfriends we are), and Andrew is now very keen to experience the sausage menu and try the other beers on offer.

Next stop … B. We are thinking of Burmese, but please leave your comment if you have any other suggestions, or recommendations for restaurants in London.

2 Replies to “A is for AUSTRIA – Kipferl”