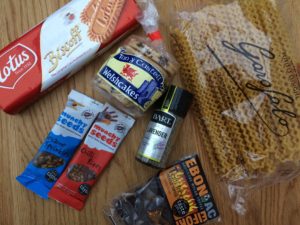 For May’s parcel, I sent to Erica, who wanted some easy snacks, and said she also loved lavendar. So I put together a parcel which included Welsh treacle toffee and Welsh cakes (with Andrew’s heritage I always like putting these into my parcels), plus some of my favourite Lotus Biscoff biscuits (and oh my God don’t even get me started on their sandwich spread!!!), some munchy seeds for quick snacks, lavendar to cook with (I am not fond of the idea of this as I don’t really like perfumed food, but hopefully Erica will enjoy it) and some of my favourite pasta which looks like a looped telephone cable!

I received a parcel from Sabine in Germany, which I am annoyed to say was so snack-tastic that I forgot to take a photo, which I have never done before and has really annoyed me as I have eaten most of the contents!

She sent me two different Ritter chocolate bars (which, when they have melted in the summer heat, you simply have to eat immediately – it’s the law), plus some chocolate wafer biscuits, some healthy soups, and a cute little Eiffel Tower keyring (not sure how that is German but I won’t complain :)). With my combination of baby brain and lack of photo I cannot remember what else she sent so apologies for not doing her parcel justice!