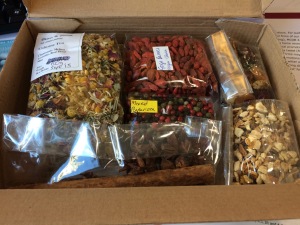 I was very proud this month to convince my colleague Liz to take part in foodie penpals – she had a great experience with it after a couple of teething problems, and received a lovely parcel from Lithuania. She also sent some Cambridgeshire goodies to her penpal, which makes me keen to get paired up with her sometime soon!

But onto my penpal experience this month. I was paired up with Sarah from Home to Roost, and was linked to send a parcel to Sue (who doesn’t have a blog). I had planned in advance to send this month’s foodie penpal some treats from a Sussex farm shop which I visited in September, and had put together a variety of biscuits and other goodies. Unfortunately Sue is gluten intolerant so I had to rethink my plans. 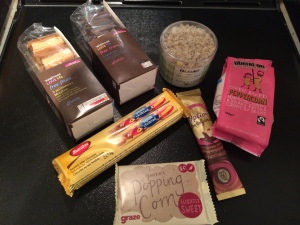 I found some lovely looking brownies and millionaire blondies in Waitrose in their ‘free from’ range and so included them in a parcel with some flavoured sea salt from the farm shop, some chocolate from Ikea (which I had – painfully – visited that morning), some delicious peppercorn nuts as Sue said she liked spices, and some popcorn from my recent Graze box as they seem to send a lot of popcorn! I also added a hot chocolate as the weather’s turning and so I thought that might be appreciated. Sue emailed to say that she was chuffed with the parcel and had dug in straight away, so I was pleased with my success! 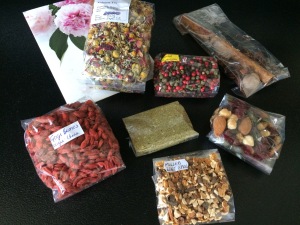 I got a thoughtful and unusual parcel from Sarah. I had mentioned to her that I am a bit of a spice coward, and so she took the opportunity to educate me with a fantastic range of spices and seasonings, including:

It was such a pleasure to open the box and see all those beautiful colours and flavours ready for me to use. I regularly use cinnamon, nutmeg and star anise so I’ll make great use of those.

Andrew is obsessed with mulled wine so I’ll be cracking that mixture open as soon as it is decent enough to be allowed to celebrate Christmas. He also loves pepper but I need to think of a good way to use the peppercorns so that I can see their beauty (as Sarah wrote in her letter to me, they look fabulous – yes they do!) – maybe a pepper-crusted lamb rump or steak …

I have never used zahtar before so I am going to investigate ways to put that to use (I am guessing with the thyme that it would work well with chicken), and finally the nuts, seeds and goji berries are the perfect healthy snack for me to have in the office instead of chocolate.

The tea – I am reserving judgement on it. It sounds like it could be a bit too perfumed for my tastes, but I’ll give it a try and let you know what I think … if it does make me relax then it can only be a good thing!

So thanks Sarah for such a delicious parcel!

If you’d like to take part in foodie penpals – take a look over at This is Rock Salt for more information.