I came across the Clandestine Cake Club via a Google search for something or other (cake, probably), and saw that a CCC event was scheduled in my area of Bowes Park that very weekend. Organised by Kay, the event had the theme of a secret – basically you had to bake a cake with a secret ingredient and there would be prizes for the winning cakes.

I never really think of myself as being particularly competitive as usually I am rubbish at anything which requires the determination to win, but when winning suddenly seems like a possibility, I become quite unattractively competitive, and a total show off when I win. This happened recently at Crazy Golf (“IN YOUR FACE – I AM THE WINNER” I said charmingly to my friends after kicking their butts); and a work team-building event where my team won a treasure hunt (a win which could barely be contributed to me in all honesty as after 10 minutes of hunting in the rain by the river Seine I was BEGGING the rest of the team to give up and go to the pub) and I went around telling everyone (including very senior people in the company) how awesome I am. However, I can cook a pretty good cake, so I thought I might be in with a chance of a prize if I could come up with something fabulous as my secret ingredient.

And then what should wink at me when I opened my fridge but my packet of Vietnamese weasel coffee, which had clearly been waiting for just such an auspicious occasion. Now I could make my favourite ever cake – coffee cake – with a secret ingredient no one would have heard of – cat poo coffee. Result. I told Kay the organiser of my intention (her response: “Oh my”) and felt very smug as the competition date drew closer.

So what is this coffee? You might have asked that question a few weeks ago. But just a couple of days before the competition the BBC did an expose documentary on the cruel way many civet cats are treated for the production of weasel coffee, and everyone had suddenly heard of the coffee and thought it was akin to battery farming chickens. I had no idea that the cats were treated so appallingly when I bought the coffee in Hanoi, from a shop which our guide had recommended, and was quite horrified. I always buy free range eggs and meat and choose sustainable fish, and think of myself as an ethical shopper, so the idea of coffee produced in this distinctly unethical way was not very appealing.

Basically, the civet cat is a coffee connoisseur and chooses only the very best fruit from the tree, but as they have a delicate stomach which cannot digest the stone of the fruit, it passes through their system (via their poo, obviously) and is collected and eventually becomes one of the most expensive coffee beans in the world.

I had never thought that these cats were living wild and free lives while the farmers collected their poo when randomly discovering it on the ground – I always knew that there must be farms for the cats. However, everything I had seen on television and in articles had suggested that the cats lived effectively ‘free range’ within farms, and certainly this does exist, even if there is a proportion of civet cat farming which is intensive. Plus, in Vietnam the coffee is often produced using chemical enzymes to replicate the flavour generated by the civet cat’s digestive juices, so there’s a chance that my coffee has never even seen the inside of a civet cat.

And so, that is how I justified to myself that I would make the cat poo coffee cake anyway. The coffee most likely wasn’t from an intensively reared cat, although I would never know for sure. Maybe that’s a bit of a cop out, but it was such a good idea for a secret ingredient that I decided to go with it and hope that the CCC didn’t think I was an awful person.

So I made a coffee cake sponge using condensed milk in the sponge as the Vietnamese drink their coffee with condensed milk, plus my cat poo coffee. I also added the coffee to a standard buttercream icing. The coffee has a kind of vanilla sweetness to it which really lends itself to baking, and it was a gorgeous coffee cake (even if I do say so myself).

I made my way nervously to Noel Park market to present my cake, and became even more nervous when I found out that members of the local WI would be judging. The organiser Kay had made a beautiful chocolate cake and it turned out that her secret ingredient was coca cola. No-one guessed but I’ll definitely be making it myself as the sponge was light and delicious, and even knowing that coke was the ingredient, you still wouldn’t guess. 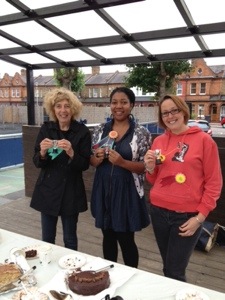 Next to be judged was mine. Some of the other stall holders and shoppers also came to have a try and my heart sank when a family of people who looked like they could quite possibly be vegetarian came to try my cake. I had a bit of an internal debate about whether I should warn them about the ingredient but then the young child forked a massive lump of cake into his mouth and so I kept mine shut. The mother said it was delicious (gulp) and asked what type of coffee had been used. I said “well, that’s the secret ingredient – the type of coffee …”. She looked confused, and then faintly horrified as she remembered the BBC documentary, and so I explained that I had bought the coffee in Vietnam and so it was probably chemically manufactured anyway (yummy chemicals), and if not it was probably from a nice cat farm as my Vietnamese guide had been a great chap. I am not sure she was convinced, but the ladies from the WI and Kay loved the cake, and I was awarded the prize for “Best secret ingredient”. Yay!

So this is how I made my award-winning coffee cake. Obviously feel free to use normal strong coffee if you don’t have any cat poo one …

For the icing: 100g butter, 50g icing sugar and another good splash of coffee

Preheat the oven to gas mark 4 and mix together all your ingredients in a food processor – easy peasy! Otherwise do the usual creaming of butter and sugar, then adding the eggs one at a time along with a spoon of flour, then the condensed milk and coffee at the end and mix well. Pour the batter into a square baking tin (grease and line if necessary) and bake for around 30 minutes. Take out of the oven and cool on a rack.

As usual for me, I made the icing according to taste and so whipped up the butter with the icing sugar first and then added the coffee until it tasted nice and strong. Once the cake cools, spread the buttercream onto the top and sprinkle with crumbled up flake chocolate. It looks a bit like a cappuccino then, and tastes even more gorgeous.

Find out more about the Clandestine Cake Club here.