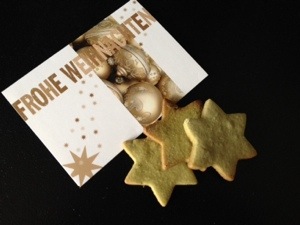 Okay, I am finally letting go of Christmas (and all the treats – it’s so hard to going back to eating normally instead of twiglets for breakfast and Christmas cake before bed, but I am doing my best!), but before my seasonal posts end I just want to do one final one on the Christmas cookie exchange I recently participated in.

As Foodie Penpals takes a break over Christmas (a well deserved one for Carol-Anne who organises it every month), one of the participants, Anne over at Les Recettes du Panier, kindly organised a Christmas cookie exchange for those of us who couldn’t face the idea of a whole month without a parcel from a foodie stranger. Obviously me being the greedy guts I am I leapt at the chance to participate!

Funnily enough, I ended up being paired up with Marie-Betty Davis, who was my very first Foodie Penpal and who has just launched her new blog, and Marina from Switzerland, who doesn’t currently have her own blog. 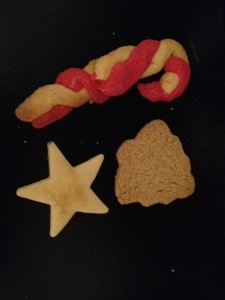 As it was Christmas, I decided to make them a selection of biscuits which I was also making as gifts for friends and family. I made oat shortbread shaped like Christmas trees (like fat Christmas trees which have spread a bit and don’t exactly look like Christmas  trees any more to be fair!), little golden stars, and candy canes.

The candy canes were an experiment and to be honest one I will never repeat. The raw dough was delicious (regular readers will know I cannot resist eating copious amounts of raw cake mix and raw dough), but not very easy to work with, and the resulting cookies were tasty but not very candy cane-like. They were also very delicate and out of the 30 or so I made, I managed to get around 10 which had not broken. I am not sure whether they even made it to their respective recipients in one piece, but the girls were too polite to say! 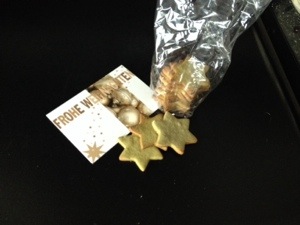 She sent me some beautiful star-shaped lime biscuits which were deliciously zesty and therefore actually tasted like they should be one of my five a day. As a consequence I felt no guilt in eating them all, without sharing them! I am looking forward to receiving the recipe from Marina so that I can make some more.

Marie’s parcel is yet to arrive due to various problems with her gas supply over Christmas and other awfulness, but she had promised something “very jammy”, which sounds worth waiting for! I’ll update the post with my review once received!

Look what just arrived in the post today – yummy! 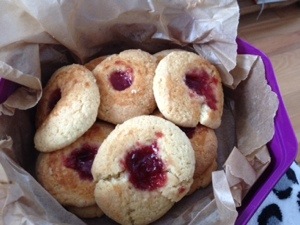