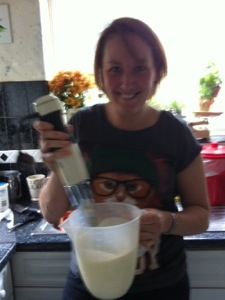 I am feeling just a teeny bit excited about this year’s Great British Bake Off. Well maybe a LOT excited. I love that show!

As with last year, I’ve decided to do a Bake Off challenge for the blog, so each week I’ll be making one of the dishes the bakers have to make. Last year I had a fantastic time doing it, even though it didn’t do much for my waistline or my bank balance, and so I am looking forward to seeing what the first episode’s challenges are (I have seen on the Sky TV guide that the bakers will be making a Swiss roll, a cherry cake, and traditional British cakes in miniature …).

So here’s a little reminder of what I made on last year’s challenge. Will you be taking part in the challenge this year?

Don’t forget to catch the new series of the Great British Bake Off on BBC1 at 8pm tonight. 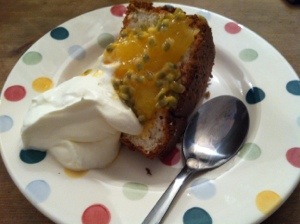 This was the technical challenge, and I bought the tin off Amazon and followed Mary’s recipe to the letter, including making a passion fruit curd to be eaten with the cake. It was easy enough to make, but definitely not my favourite kind of cake as it’s very dry due to the lack of butter in the recipe (egg whites make the cake light and airy). My angel food cake tin has been collecting dust in the kitchen ever since! 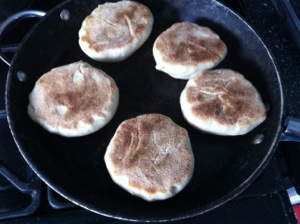 This was also a technical challenge, and I followed my favourite recipe by Hugh Fearnley-Whittingstall. I’ve made these muffins before and since the GBBO challenge – shop bought ones just taste rubbish by comparison. I remember visiting my Mum in Sussex after making these, so took her a jar of curd and bag of muffins so that she could have a homemade breakfast on me. Lucky mum. 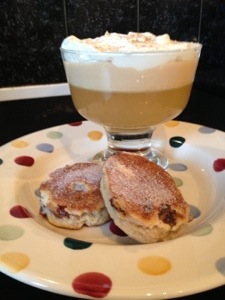 This was a signature bake challenge, and I decided to make a Jason Atherton recipe for apple trifle (with the addition of Welsh cakes being my little tweak), which I made once before but perfected for this challenge. I would have liked to make Ils flottant (the technical challenge for that week) but Andrew hates meringue and I didn’t want to eat them all myself (well, I did, but you know what I mean). I’d make this again. 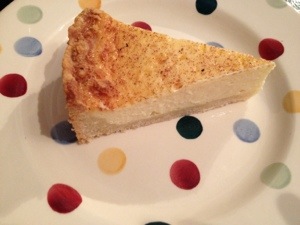 This was one of my most enjoyable challenges – I’d made a custard tart several years before, using Marcus Wareing’s recipe (as you know from my recent blog post, he is a favourite of mine), and I was keen to make it again so this gave me the perfect opportunity. It has the scope to go terribly wrong, but I was pleased to make a successful tart, and I would definitely make one again. 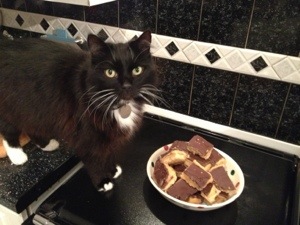 This one was another signature bake (a traybake) as the technical challenge was tuile biscuits and I didn’t really fancy making them (they seemed a bit hard and not really worth the effort!). I was meeting some friends that weekend, so also wanted a homemade gift for them, so I used a Nigella recipe which I have used before, but tweaked it with the addition of salt to make the caramel a salted caramel. They were insanely delicious and the only reason I haven’t made them since is because I would hoover them all up in one go. 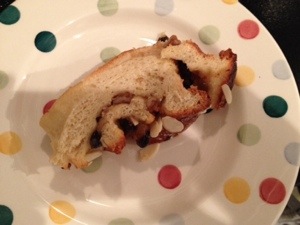 I loved this technical challenge, as it involved making a sweet bread which I had never done before. Andrew wasn’t keen on the idea of sampling the couronne so I ended up taking it to work for a breakfast meeting with colleagues, and they seemed very happy to munch it all. I haven’t made it since, but this has reminded me what a lovely recipe it was, so I am definitely going to make a couronne again sometime. 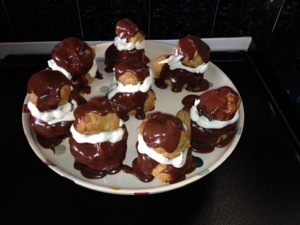 Well what a bloody faff these little buggers were. I don’t think I have ever enjoyed a cookery experience less. I struggled with the first batch of choux pastry so ended up making a second batch, then had to make vanilla cream to fill them, chocolate ganache and creme chantilly to decorate them. They seemed to take so long to make, with so many processes to follow, and so much fiddly work, that I didn’t find it fun at all. However, eating the little nuns was quite an experience as they tasted amazing. However, eclairs and profiteroles are much easier to make, so I’ll probably never make a religieuse again. 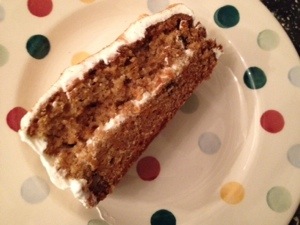 I copped out of making the dacqoise for this week’s technical challenge (I still felt damaged after the stress of the previous week’s religieuse!) and then felt guilty and so made the showstopper (vegetable cake) and signature bake (bread made with unusual flour). My vegetable cake was not the penis shaped one I had been tempted to make for Jo’s hen weekend, but a classical carrot cake by the Hummingbird bakery. I also made a loaf of spelt bread to have with my packed lunch soups. Both were lovely, and I have made them both since. 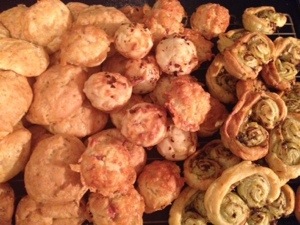 I made these canapes to take to Jo’s hen weekend, and didn’t even make a single one shaped like a willy! Instead I made gougeres (cheese flavoured choux buns), pesto palmiers and cheese and ham muffins. They were all tasty (cheese and pastry normally is, let’s be honest) and were handy for helping us soak up the vast quantities of booze we consumed. I haven’t made any of .hem again, but I must make the gougeres some time as they were gorgeous! 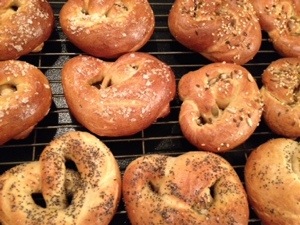 The final week of the challenge came when our boiler had gone bust, I had been offered a new job, and we were preparing to go on holiday. I made Paul’s pretzels, which were very tasty, but another thing I haven’t made since! I did have one minor glitch where the pretzels stuck to the greaseproof paper which I baked them on, which meant I had to slice off the bottoms of them to make them edible. A bit annoying, but they did still taste nice.