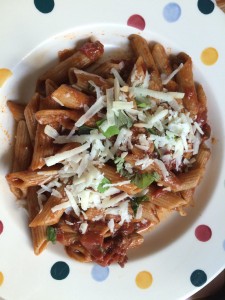 Andrew and I have always loved cuddling up on the sofa to watch a tv show or film, usually with a cat or four on our laps demanding our attention. In the olden days when Netflix and Amazon Prime didn’t exist and we had to watch DVDs (yes, I do also remember VHS), Andrew and I started our addiction to box sets with The Sopranos. The expression ‘binge-watching’ could have been made for us.

We started the first series just as the final season was due to air in the US, but managed to avoid any spoilers, mainly  because we would watch three or four episodes in an evening, and sometimes spend entire weekends watching “just one more episode …”.

Not only does this kind of activity immensely appeal to our bone idle selves, but I do believe The Sopranos is one of the best TV shows I have ever seen. In case you are interest, I also highly rate The Wire, ER, Sons of Anarchy and House of Cards. My entirely non-scientific way of establishing at the start whether a TV show is going to be good or not is to listen to the theme music. If you want to hear it again each time you start a new episode (despite having listened to it just an hour before) then it’s a good show. The West Wing has a crap theme tune and what do you know? … it doesn’t live up to my expectations either. Too schmaltzy and kind. A President needs to be a Frank Underwood kind of President to make a good TV show. 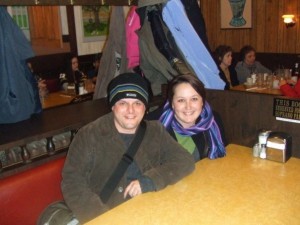 A lot of Tony Soprano’s life actually revolved around food: either at Carmella’s table, Satriale’s pork store or Arti’s restaurant Vesuvio. The final episode aired at a diner in New Jersey called Holsten’s, which Andrew and I visited as part of a Sopranos tour during our last trip to New York (we also visited the strip joint Bada Bings, which was slightly crazy, and got to meet the actor who played Vito, Joseph Gannascoli). Our New York holiday was pre-Weightwatchers days, so I am on the podgy side in my photos!

I assume that my Sopranos cookbook (which my brother found in a charity shop and bought for me) is authorised by the TV series creators as it’s packed with pictures and anecdotes from the show, and purports to be written by Arti himself. 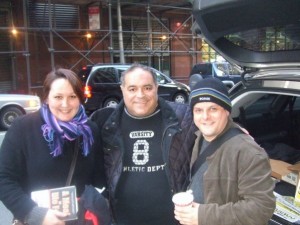 I didn’t have high expectations about the quality of the recipes in the book, and had never cooked anything from it before, but as the rules of the Cookbook Challenge are that Andrew gets to pick the book, I had no choice but to find a recipe to cook.

Actually, The Sopranos Family Cookbook is full of delicious-sounding recipes, and I eventually settled on Braciole (stuffed beef in tomato sauce), as it sounded relatively simple and I was pretty sure I remembered Tony and family eating it in the show.

Braciole is basically thin slices of beef which have been stuffed with garlic, cheese and ham and cooked in a tomato sauce. As I have previously discovered, the simple recipes are often the best, and this braciole was no exception. The beef rolls cook for two hours in the tomato sauce and so are tender but still packed with flavour when served, and they are surprisingly hearty as well. I served the dish according to the book: with the tomato sauce mixed into penne as a first course, and the beef served as a second course. Excuse the pictures of the beef: I won’t lie – it doesn’t look pretty.

I bought this steak already thinly sliced from Ocado, but if you want you can buy normal steak and pound it between clingfilm until it’s around 5mm thick (I pounded mine a little thinner than it came). Sprinkle the beef with 1tsp garlic, the cheese, parsley and salt and pepper. Then lay a parma ham slice on top of each slice of beef and roll each one up like a sausage. I held the ‘sausage’ in shape with a couple of cocktail sticks, but you could use string if you have it. 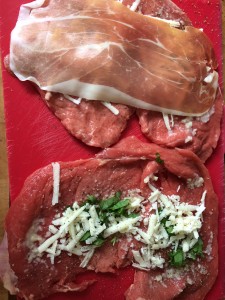 Heat the olive oil in a saucepan with the remaining garlic and add the braciole to the pan so you can brown it on each side. Be careful not to burn the garlic. Then add the glass of wine and simmer for two minutes to burn off the alcohol, and add the tin of tomatoes to the pan along with the fresh basil. Put the lid on the pan and cook the braciole over a very low heat for two hours until the meat is tender, adding a little water to the pan if the sauce becomes too thick or starts to catch (I didn’t need to add any water to mine, but it’s warned that you might need to in the book). 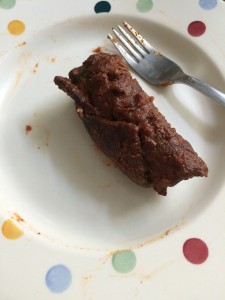 Then serve the rich tomato sauce with the cooked penne, and serve the beef as a second course (I am not sure if you are supposed to serve something with the beef but I didn’t). Andrew thought he would be able to manage two pieces of beef but he couldn’t. He took the leftovers as a packed lunch the next day and he said it tasted even better then, so it’s definitely worth making the whole recipe even if you don’t expect to eat it all in one go.

Next time will be Italian again, as Andrew’s picked Gino D’Acampo’s cookbook Fantastico for the next Cookbook Challenge. Until then, do let me know any recommendations for TV shows to watch. I don’t fancy Game of Thrones or The Walking Dead (Andrew watches them though), and Breaking Bad and Orange is the New Black are on my list. Any others?