Whenever someone says to me “you are a foodie, tell us where to go for dinner” I take it on as a fun personal challenge, as there’s not a lot I like doing more than thinking about food (except maybe eating it). One of my best friends from school, Sonia, set me to task most recently – we haven’t seen each other for ages and wanted to meet up somewhere relatively local to us both in north London. Finsbury Park was equidistant, and Turkish or Greek food was the obvious choice for that neck of the woods, but I fancied something different.

A quick Google brought up Dotori Korean and Japanese restaurant, with excellent Tripadvisor reviews coming up first in the search engine results. I love Korean food (see K is for Korea) and Japanese food too, and Asian food generally is some of my favourite. Sonia agreed to my heavy hints, and I wasn’t even put off by the lack of booking option, as how busy was the restaurant going to be just after New Year?

Dotori is literally a stone’s throw from Finsbury Park station, and was totally rammed when we arrived at 7.30pm. It’s a tiny place, filled with small tables, and they have a system of taking your name and phone number when you arrive so that they can call you when a table is ready. We were told that we would probably need to wait for 15 minutes but actually they called us at closer to 10 minutes. Keep in mind the restaurant is cash only, so you might want to take that time to pop to a local cashpoint (which we just had time for whilst we were waiting for the table).

Service is speedy, and you are encouraged to order quickly (and food comes out from the kitchen with barely any wait time), but we never felt rushed, and by the end of the evening there were fewer customers and we were able to linger over our green teas.

Both Sonia and I are pretty clueless about Korean food (I love bibimbap and Korean fried chicken, but that is about the extent of my knowledge), so we ordered a Korean set menu and left things in the hands of the kitchen. For £33 between us we were brought a variety of dishes including cold vegetables (sweet pickled daikon, spinach with sesame, sour beansprouts, spicy cucumber and carrot kimchi, and seaweed): 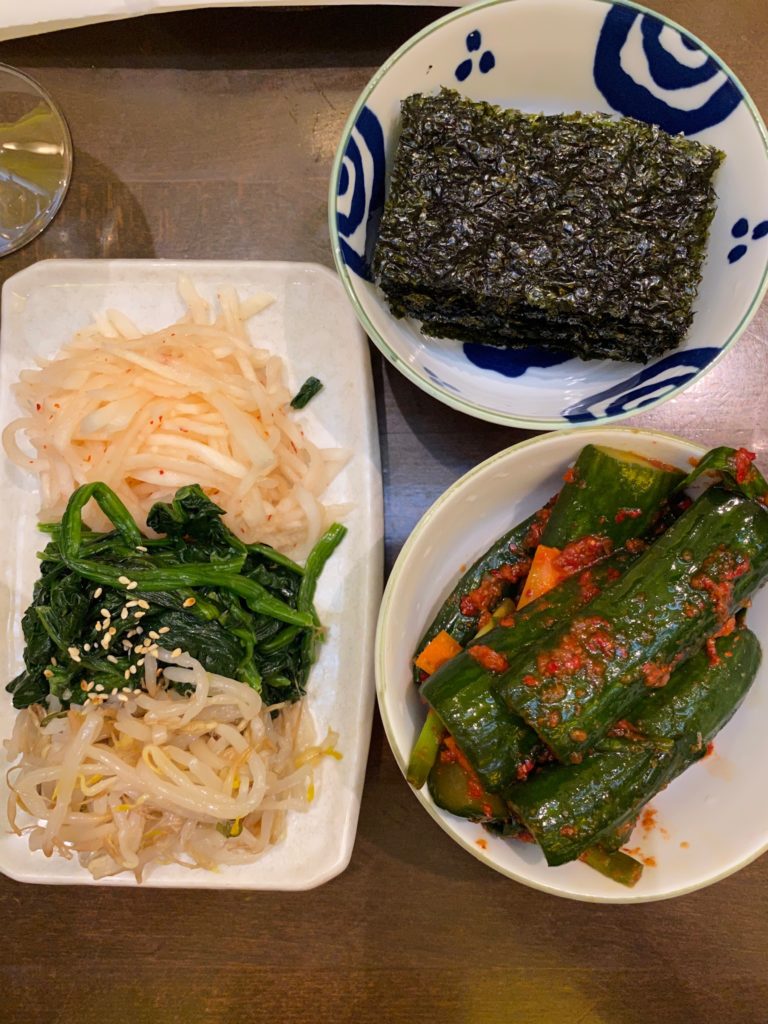 Kkanpungi chicken, which was crispy deep fried chicken in a piquant sauce: 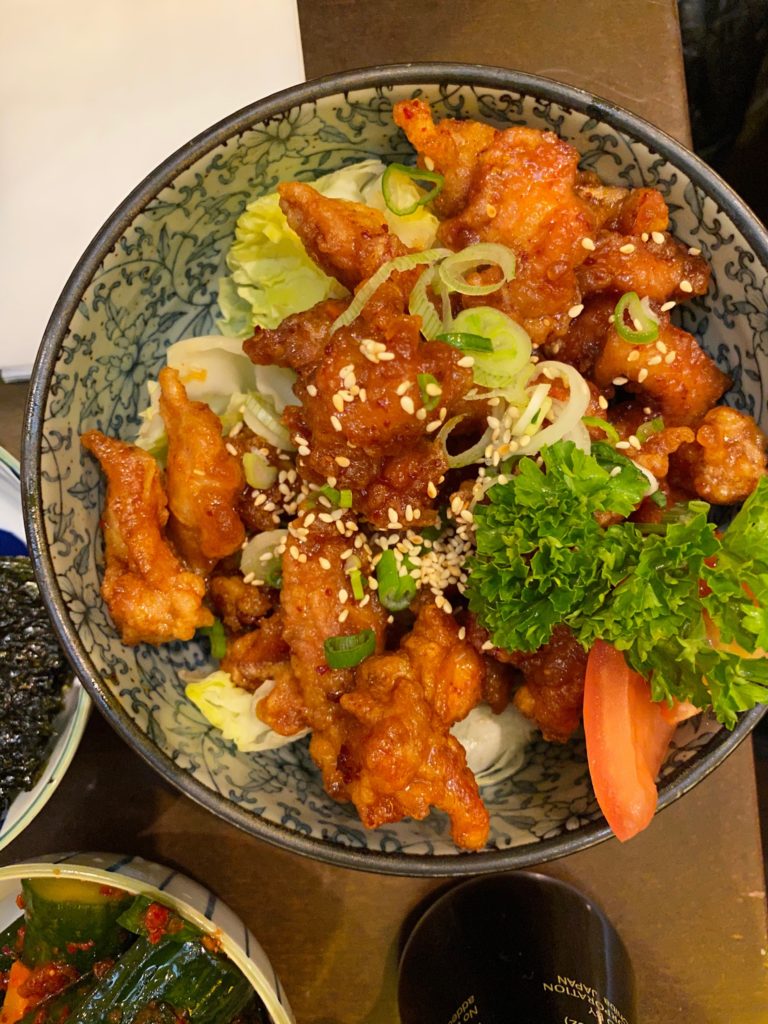 A seafood pancake, filled with crab (I think) and spring onions, served with a soy dipping sauce: 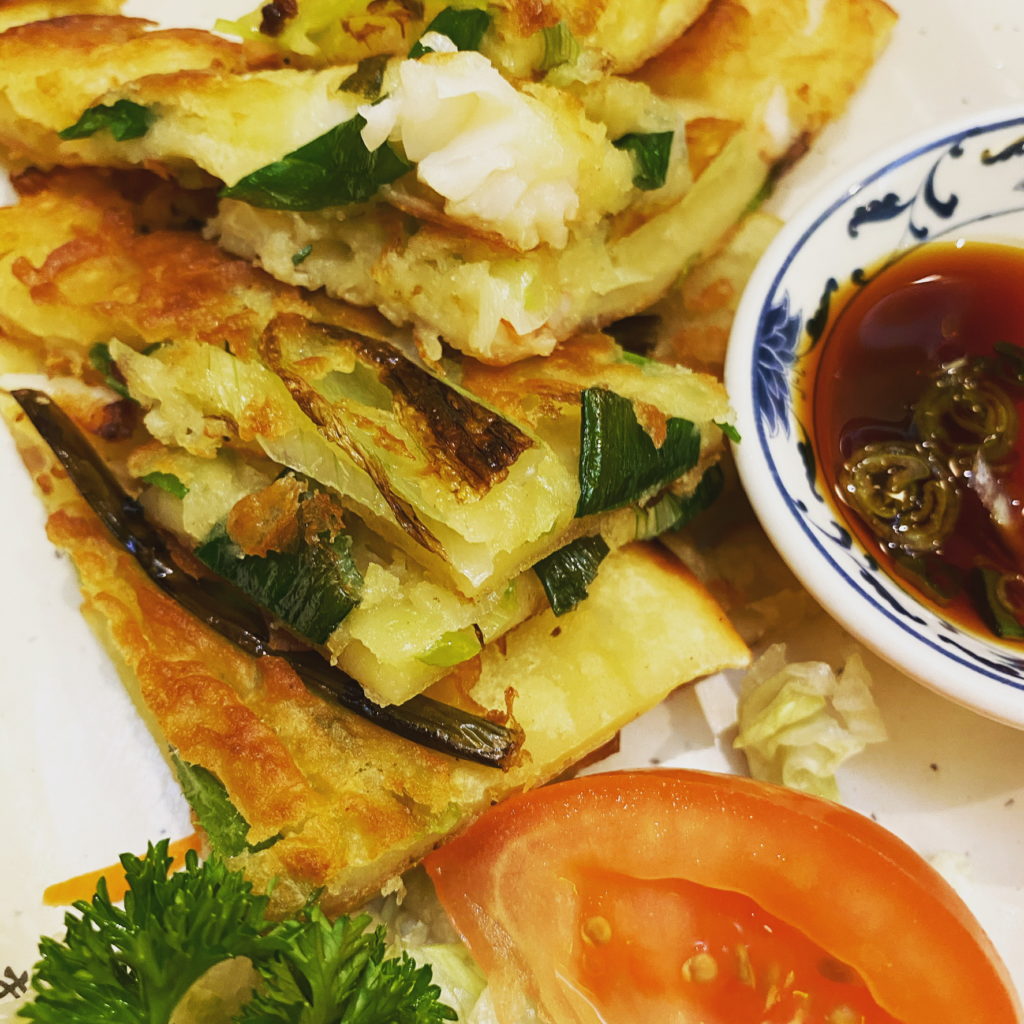 Beef bulgoggi, which was served sizzling with vegetables on a platter, and accompanied with rice: 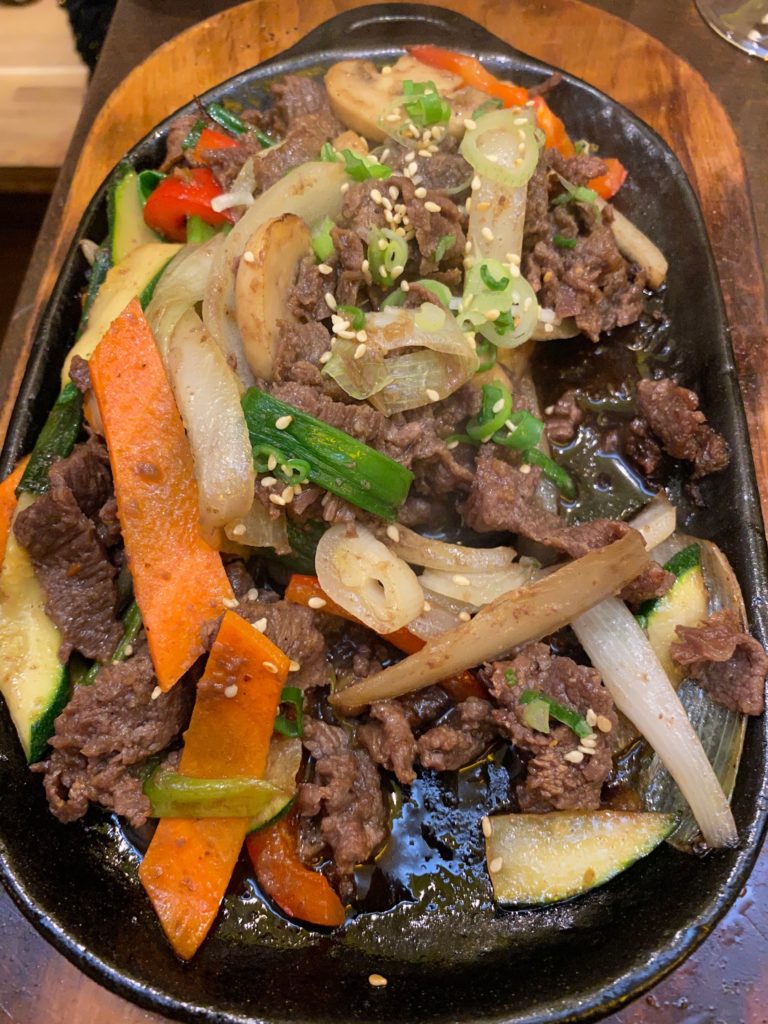 This was more than enough food for the two of us, and my favourites were the pickled veggies, chicken and pancake. I don’t always like kimchi, but Dotori’s was not as pungent as some of the ones I have eaten (I wonder if it was not fermented for as long as others?), and was very tasty, with just enough spice for a spice coward like me. The only thing I didn’t like were the seaweed crackers – they tasted a bit fishy and were soft and floppy instead of crispy.

Of course, as well as tasting delicious, kimchi and the pickled vegetables are super healthy and on-trend, and I must say that despite the quantity of food eaten, I didn’t feel overly full or bloated.

Both Sonia and I said we would go back to Dotori. I know that Andrew would absolutely love it there (although he’d probably order too many items off the menu!), and it’s also very reasonably priced (£64 for food, a bottle of white wine, green tea for two and service). And the best thing was that despite being packed, the restaurant was still quiet enough for Sonia and me to catch up on a year (or more!) of life stories, gossip, and old times. We’ve promised not to leave it too long next time, and that’s a new year’s resolution I can definitely get behind!