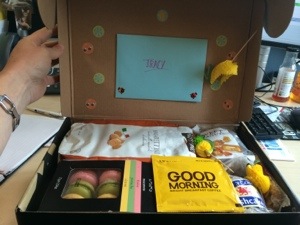 Whoops, I am late with this month’s foodie penpal instalment, and I certainly can’t blame the lovely Kate for that one, as she sent me a beautiful box of goodies last week which I have been munching my way through.

Nope, once again I have to blame the kitchen (or lack of) which is making me completely disorganised and out of sorts. Every time I think I am going to be able to use the kitchen, another piece of work starts which brings more dust, plaster, paint and general mess into my life and ruins my plans. So instead of writing my blog, I was going out for dinner or trying to clean up all that bloody mess (fighting a losing battle at the moment).

But, Kate could not have picked a better parcel of goodies to improve my mood. She lives in Wales, not too far away from where Andrew is from, and her parcel was a generous mixture of ‘tea, biscuits and retro’. As well as a package of Andrew’s favourite Welsh cakes and his favourite Welsh tea, and a large bag of Welsh crisps, she also included a selection of her favourite biscuits (Amarettini, crumbly oaties and beautiful pastel coloured macarons). 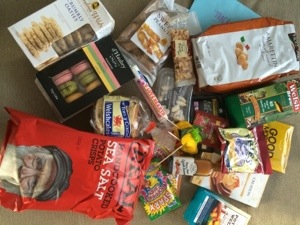 Then the retro section of my goodie box included: bacon fries (she said they were pinned up in the pub next to scampi fries, which I now have a craving for as I used to LOVE them, along with cheese Moments!), Love Hearts (awwwww), popping candy (best thing ever – my brother and I were addicted to this when we were growing up – looking forward to eating some and scaring the cats!) and sweet peanuts and peanut bars. I love peanuts – sweet or otherwise – and so these treats were perfect for me. I had never come across the sweet peanuts before (Kate used to eat them as a child), but basically they are boiled sweets with a peanut flavour – and shaped like monkey nuts! 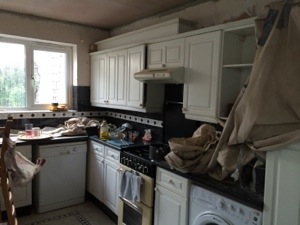 Then some of the randoms included cajun hot sauce (apparently good with baked beans, according to Kate, so I must try this) and a graze box and vouchers for a free box (I have already signed up!). Along with some little paper fruits, single tea and coffee sachets, and potato wedge seasoning, I feel like I had been truly spoiled.

Although Andrew had snatched the Welsh cakes from my hands the minute he saw them, I have already sampled the peanut bars and sweets. The tea has helped to restore my sanity during my kitchen nightmare, and I am saving the crumble biscuits to have with a cuppa tomorrow when we finally have some peace and quiet as the builders are having a day off. I’ll be relaxing with the packet of those, a cuppa, and catching up with Masterchef on the telly (isn’t Marcus Wareing brilliant on there as a guest judge? I am really hoping they make him Michel Roux Jr’s replacement for Masterchef Professional). Thanks Kate for such a thoughtful and generous box. I hope I get paired up with her soon so that I can return the favour.

I was partnered with Annette from Austria who likes to eat healthily but had also discovered Montezuma chocolate when last in the UK and so requested a bar of that in her foodie penpal parcel. As she said she enjoyed making stews and curries, I enclosed the following in her parcel:

Annette was pleased with her parcel (especially as I got the chocolate right!) but I got the impression she was a bit bemused by the combination of sweet and salty popcorn. It’s an acquired taste!

So once again a great foodie penpals experience. If you want to have a go yourself, visit Carol-Anne at This is Rock Salt for more information.