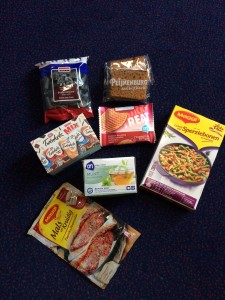 Okay, I know I am really late this month with my reveal, but it’s not my fault! My Dutch penpal Mandy was a bit delayed in sending me my parcel (for which she was very apologetic) and I wanted to wait to receive it before I posted an update, and I finally had my box of goodies delivered today. After a day out of the office yesterday I was super excited to rip the packaging open so I could see my treats, and I wasn’t disappointed.

Mandy sent me a great parcel of “her favourite things” but didn’t explain what they all were, and as I don’t speak Dutch I’ll have to make a few educated guesses, so here goes: 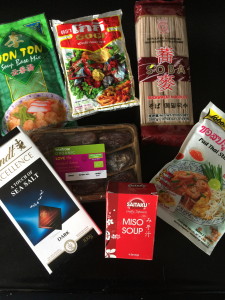 I was paired up with Kerry and so sent her the following as she said she loves Thai food:

Kerry did her reveal via the new Foodie Penpals facebook page – why don’t you take a look and think about joining up? f you are interested, then please do find out more and sign up at This Is Rock Salt. We’re taking a break next month due to holiday season but I am just in contact with May’s penpals so I’ll hopefully be able to reveal another lovely parcel at the end of this month.