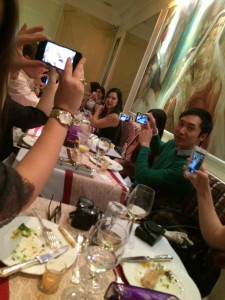 Thanks to Zomato, not only do I have a handy little app which allows me to search for restaurants and read honest reviews from customers, but I also get invited out to lovely restaurants with fellow food bloggers for their Zomato meet-ups. I have been to Bierschenke and Ink, and also had vouchers for Whyte & Brown and One Moorgate Place. Most recently I was invited to Gaylord in Fitzrovia – one of the oldest Indian restaurants in London.

There’s nothing like an evening out with fellow food bloggers – as each course arrives everyone hovers over it with their smartphone or digital camera before digging in with enthusiasm. We were asked to arrive at 6pm, which I thought was a little early, but then again I wasn’t expecting the epic feast as we received.

On my table were three bloggers I’d never met before, but I have subsequently become great fans of their blogs: Nicola from A Little Spoonful Of (amazing photos which make me DROOL – do check out her instagram feed), Erin from Island Bell and Katy from Little Miss Katy. We all got to know eachother as we waited for our food to arrive, but it didn’t take long before our cameras were out and snapping piccies.

We started with this fantastic little concoction which I had never come across but is apparently quite common: it’s a spicy broth which you pour into the little puffed crisp and then pop into your mouth for a flavour explosion – a golgappa shot. 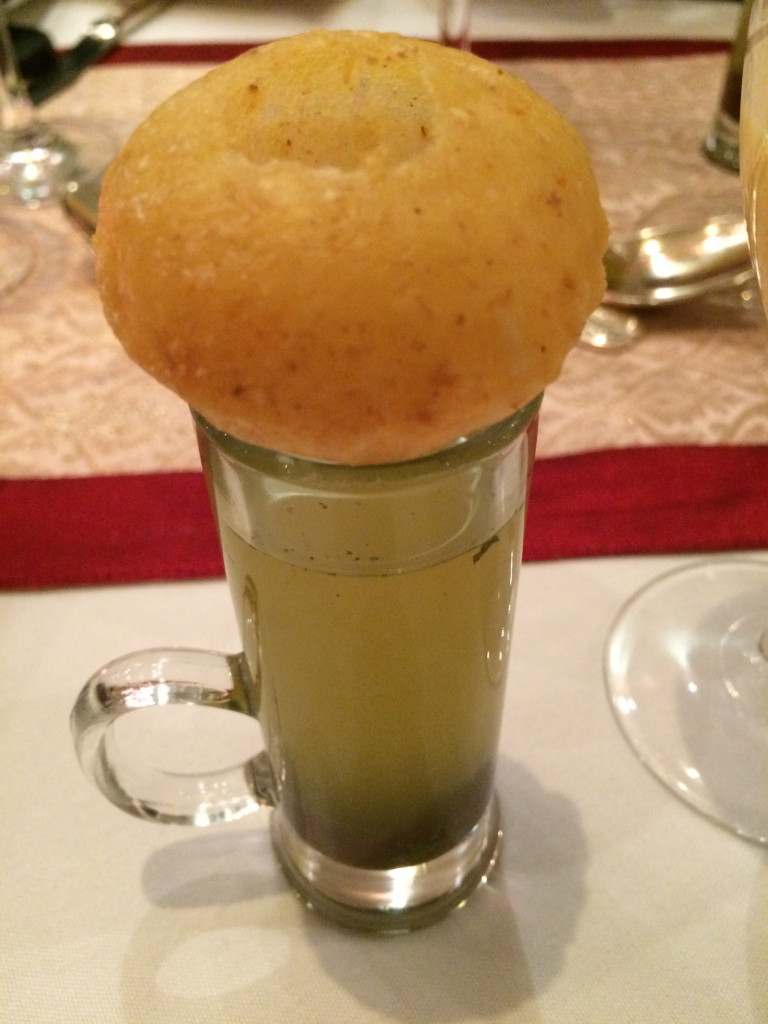 Then we moved on to spiced popped rice bhelpuri (a bit like rice krispies) which I have had before. As with the first dish, this little treat was beautifully presented and a lovely little taster to whet our appetites. 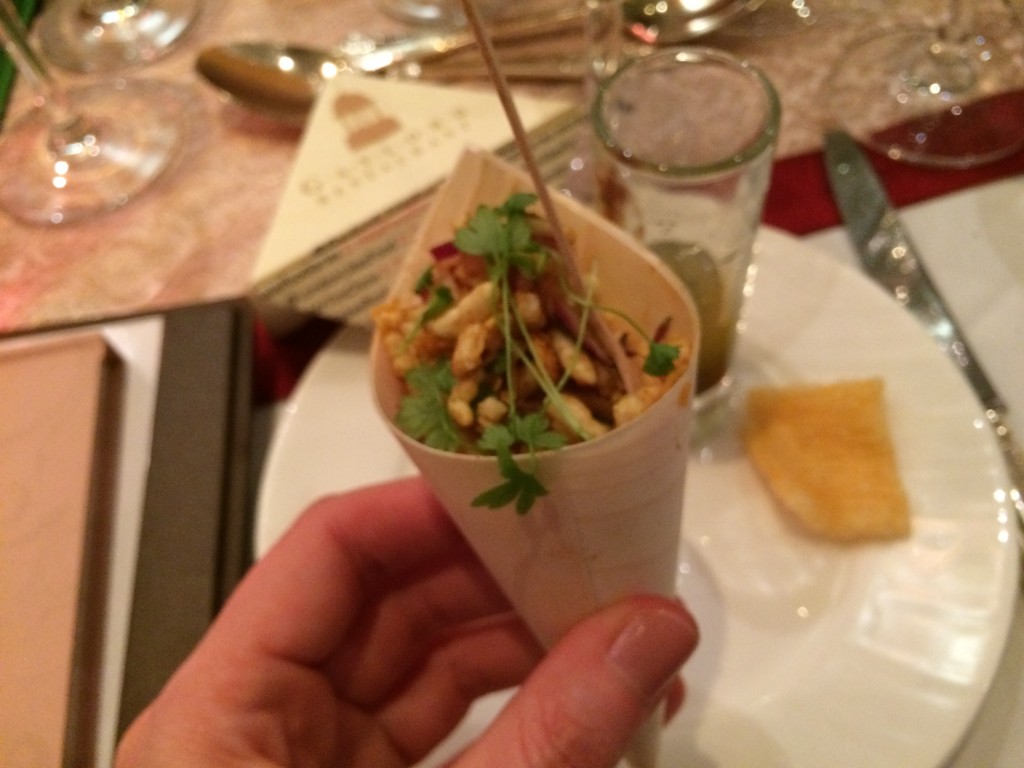 Next was a little potato cake with chickpeas called an Aloo Tokri Chhat, topped with an edible flower – so cute. 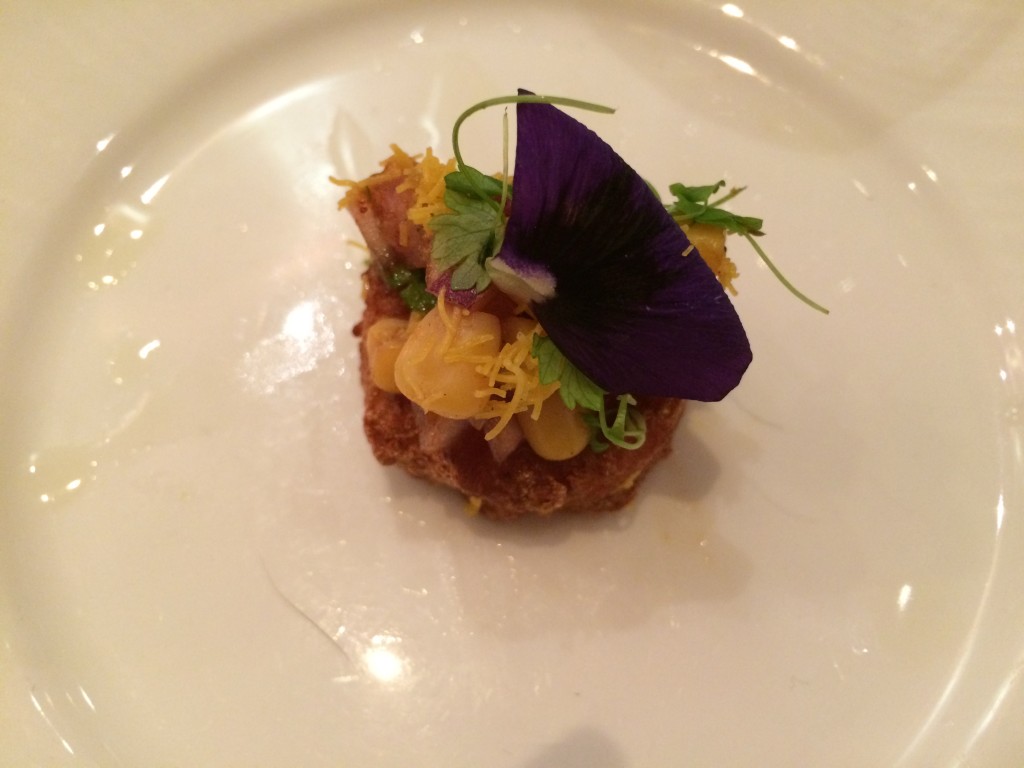 Then for our final canapes we were supposed to be presented with two chicken dishes – zaffrani and murg mali tikkas. However, we realised slightly later in the evening as we were trying to keep track of our dishes (bear in mind that we were also being fed cocktails and wine) that we’d only had one chicken dish so asked if we could try the other one … those poor guys at Gaylord must have thought we were unbelievably greedy, but I promise you it was all in the interest of research for this blog post … I promise! 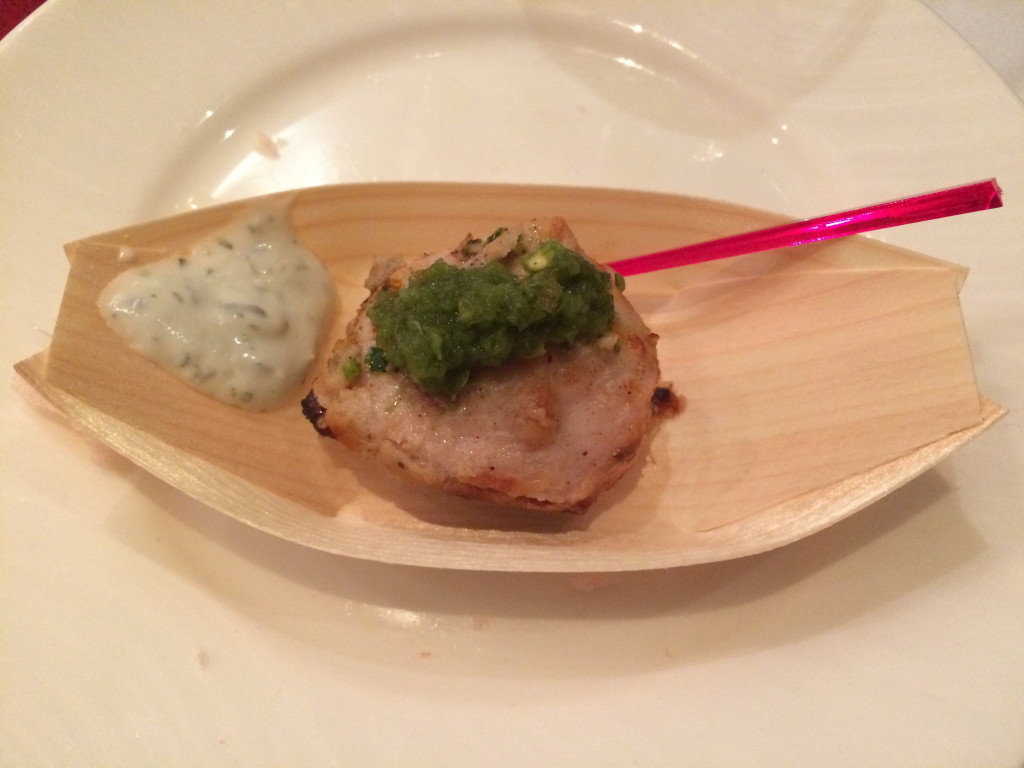 Finally finishing the canapes, we then moved onto the starters (because we hadn’t already eaten enough, right?). First up, tandoori prawns (and boy were they huge prawns): 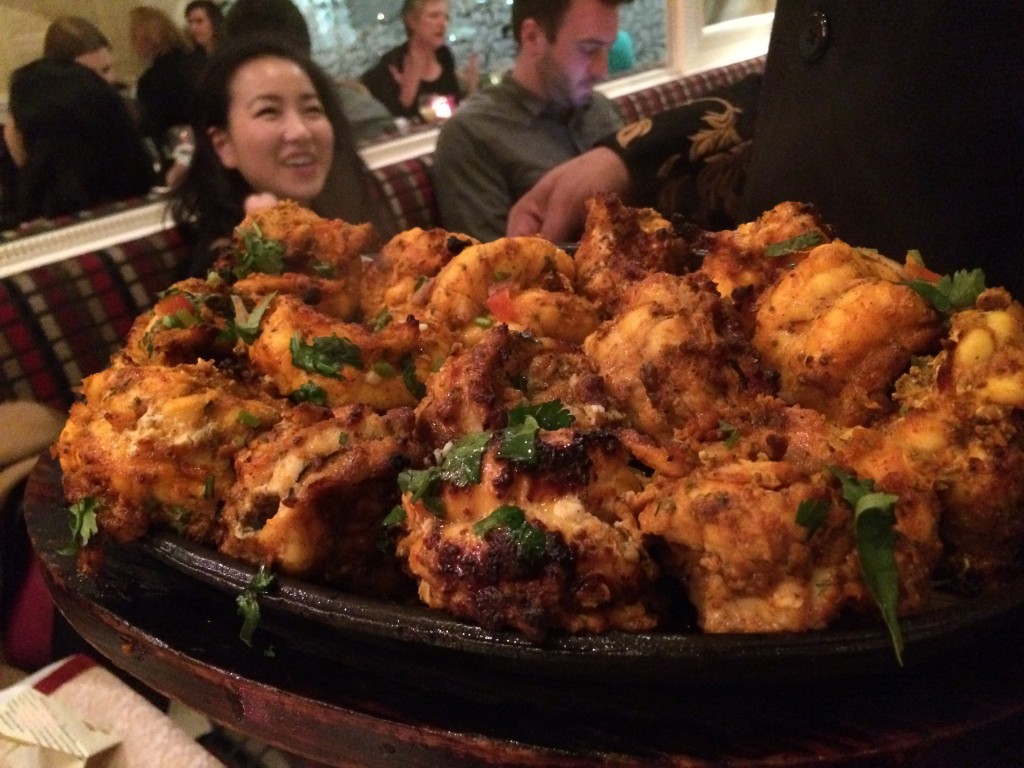 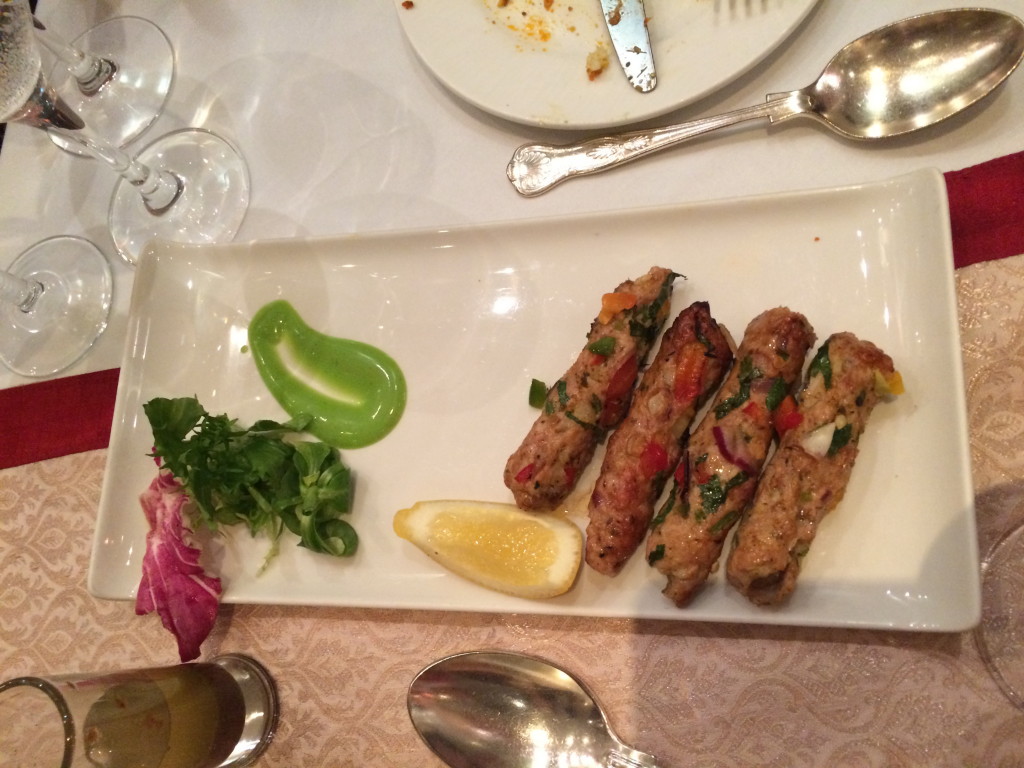 Then there was the Baby Idli with gunpowder spice – I couldn’t really tell you what this was … a bit like a dense sponge with not an awful lot of flavour to be honest, so not recommended: 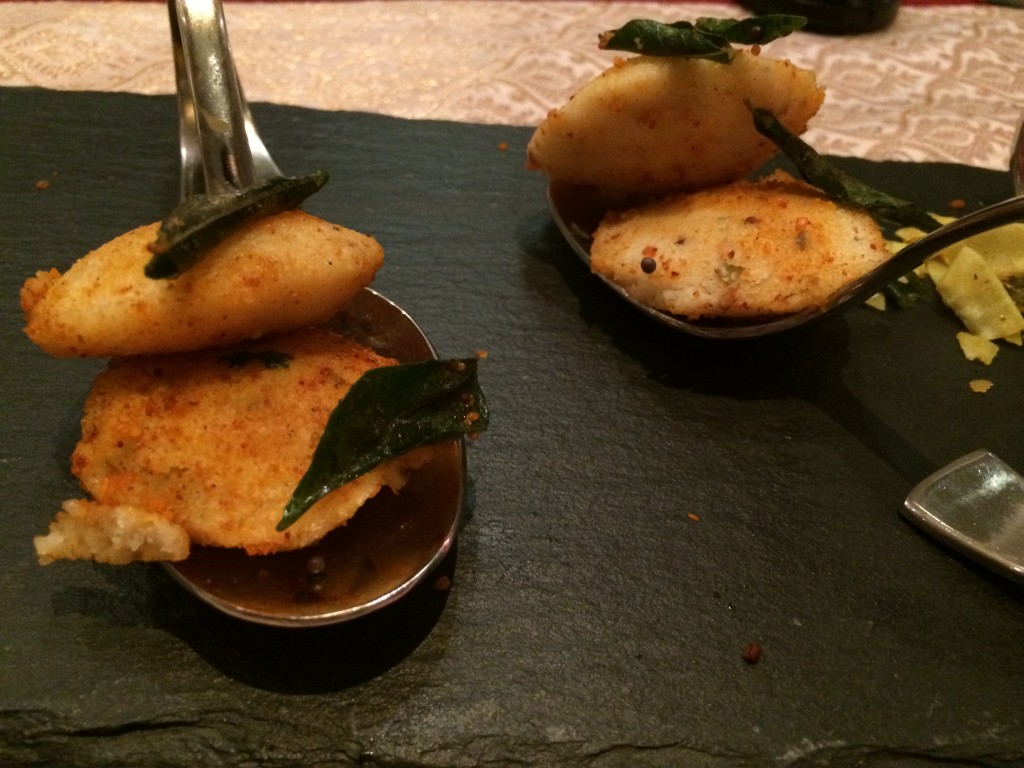 Then crab cakes, which weren’t as packed with crab flavour as I’d hoped, but were fabulously presented: 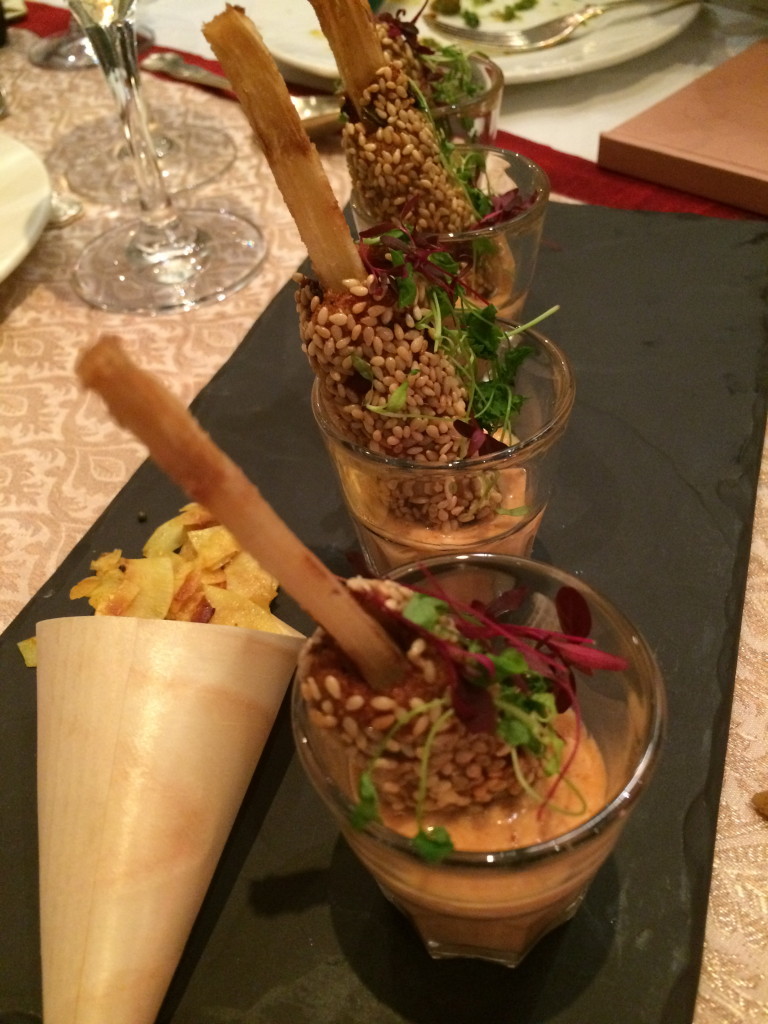 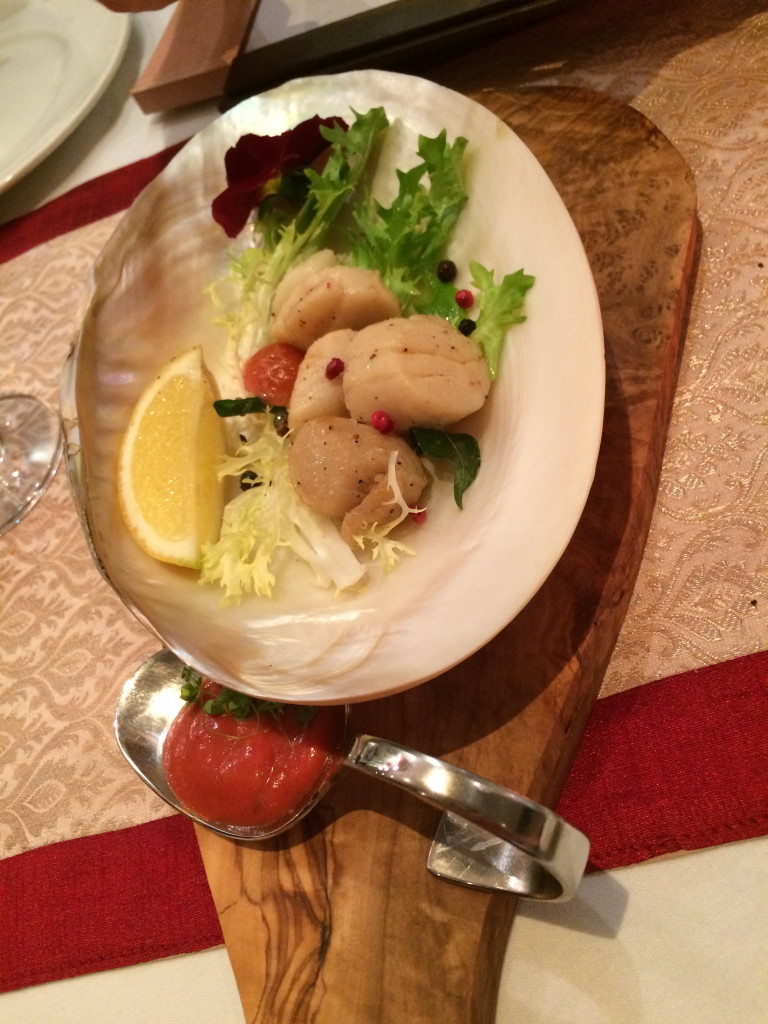 And finally two types of kebabs in tacos … which ARRIVED IN CARS! I mean, a bit mental – yes, but quite a showstopper on our table and there were lots of blogger photos of these babies: 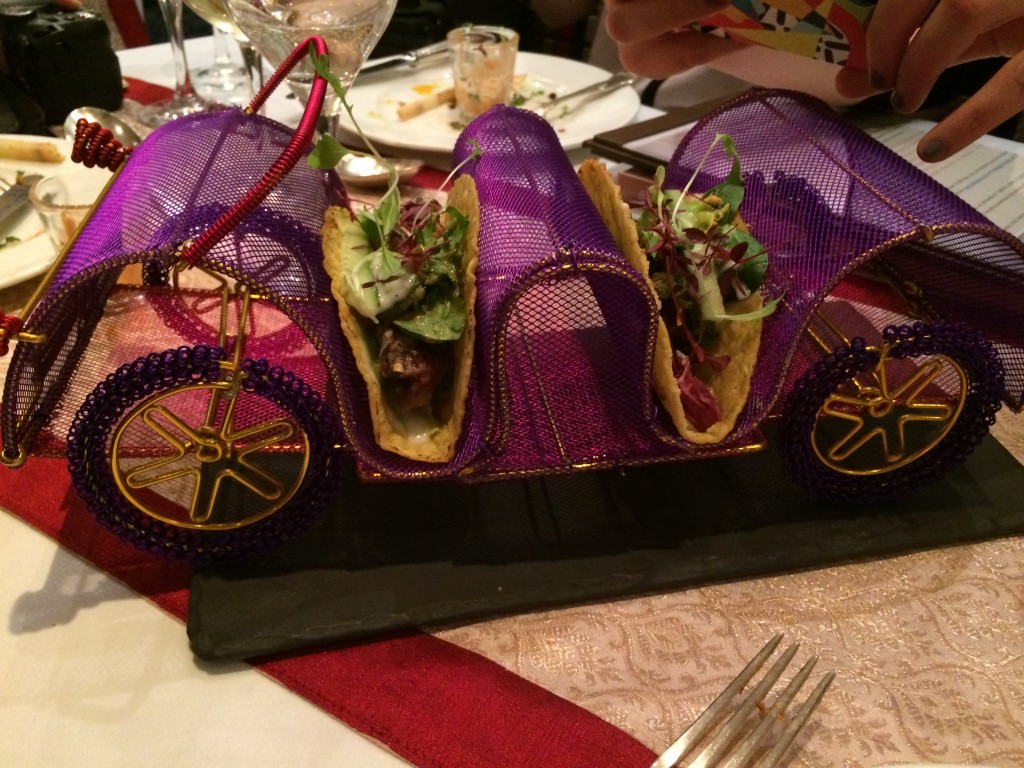 At this point it was getting late and we had only just finished our starters! Alexandra from Zomato said at this point previously the restaurant had served bloggers six main courses (seriously) but because that had taken so long we would only be served three. Oh woe is me. Other clever bloggers chose to have a set menu each on their tables, but we had all read about the famous Gaylord butter chicken so all opted for the same menu – we had: 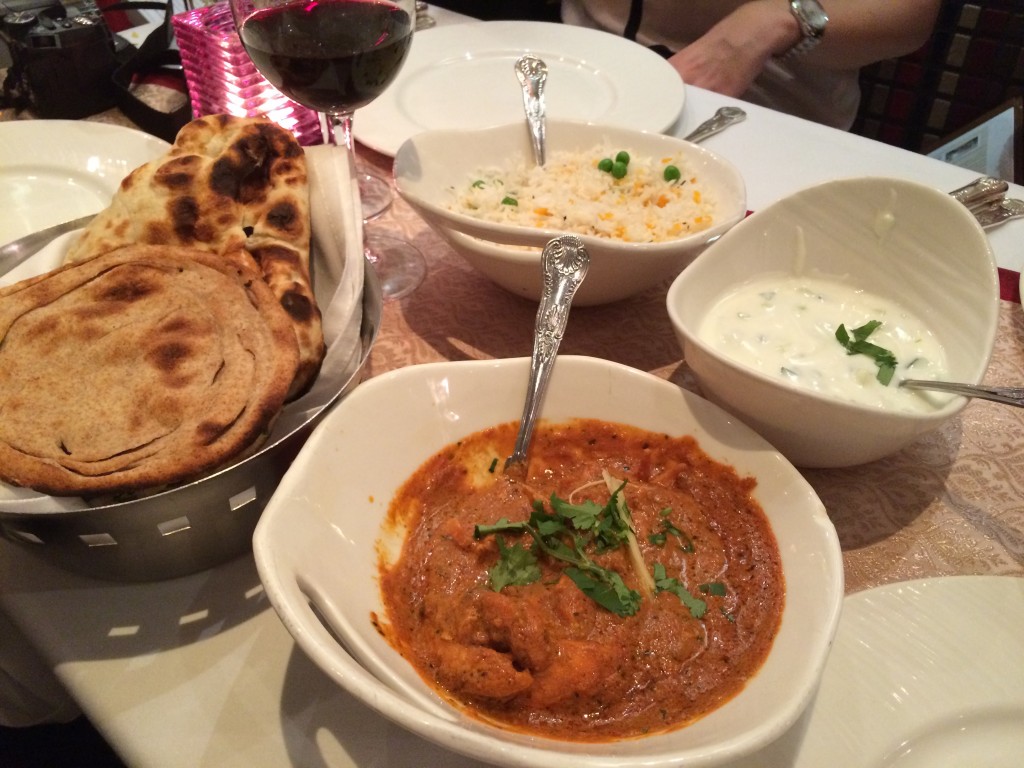 The curries were also served with Dal Bukhara, which is Gaylord’s signature lentil dish; Chana Peshawari – chickpeas; Baingan Hyderabadi, which is aubergine chunks; Anar and Cucumber Raita; Zaafraan Basmati; and an assortment of tandoori baked breads, fresh from the charcoal oven. Look at my full plate! 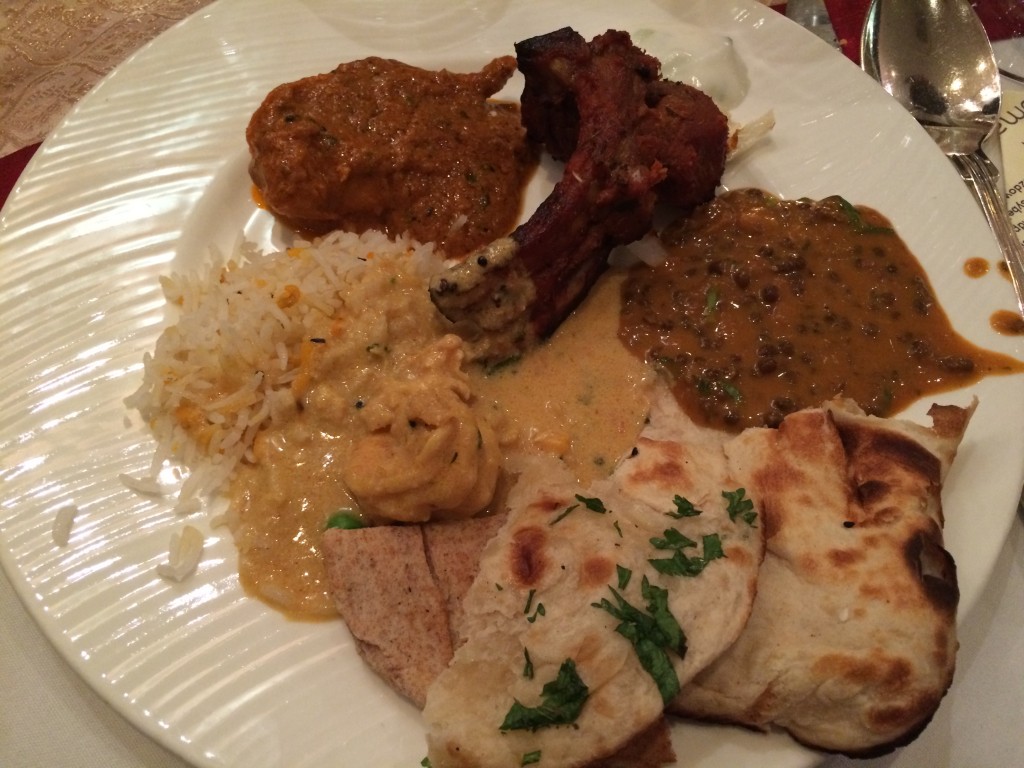 But my absolute favourite was this bread: 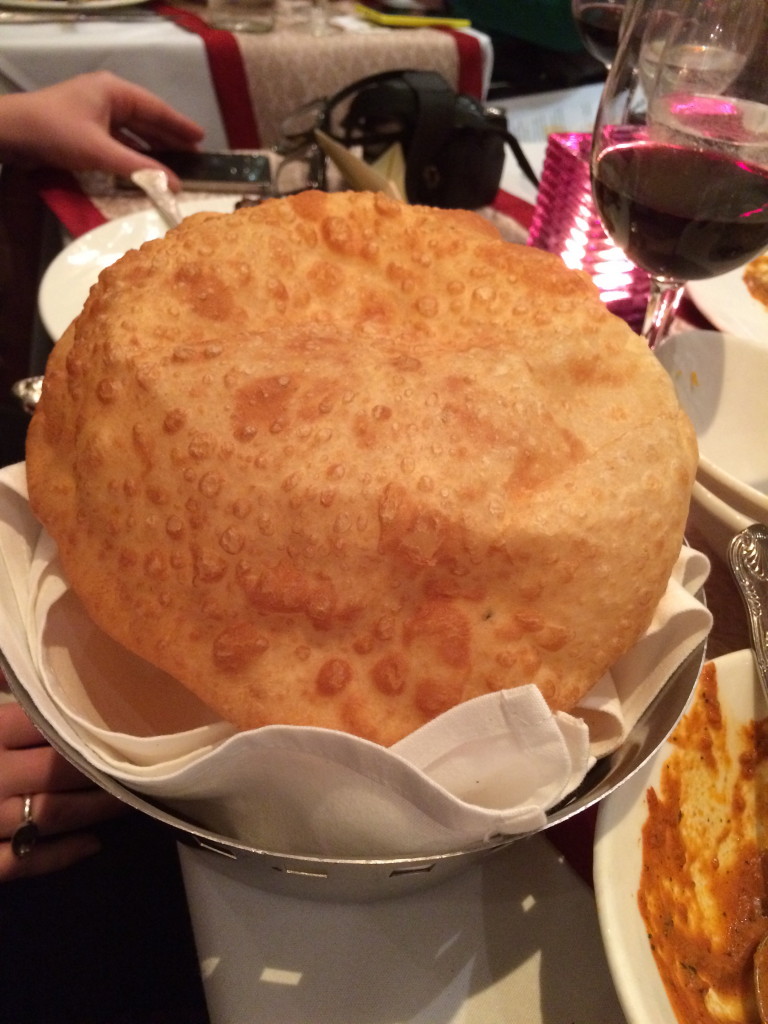 Finally … finally we moved onto desserts, and these were the disappointment of the evening, which is always the case in Indian restaurants in my opinion. We had Gajar Halwa, which is a carrot pudding, and Rasmalai Indian cheesecake: 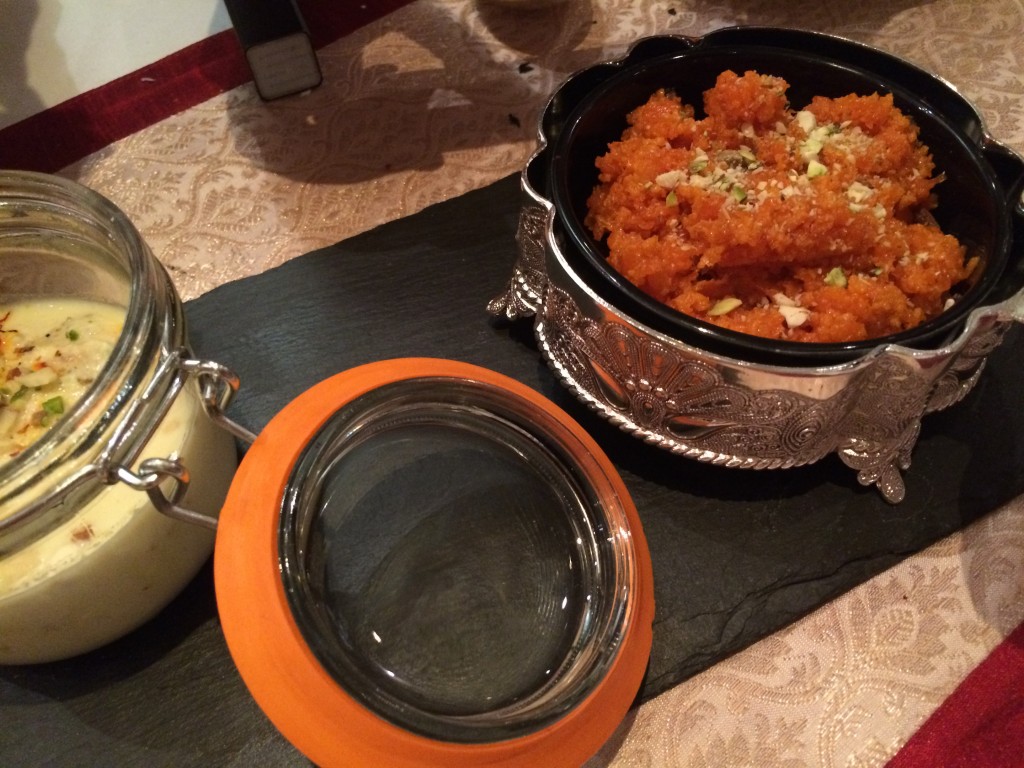 Finally we were presented with flambeed Gulab Jamun with spiced rum, which had such a hit even after flambeeing that I was immediately pissed after one mouthful: 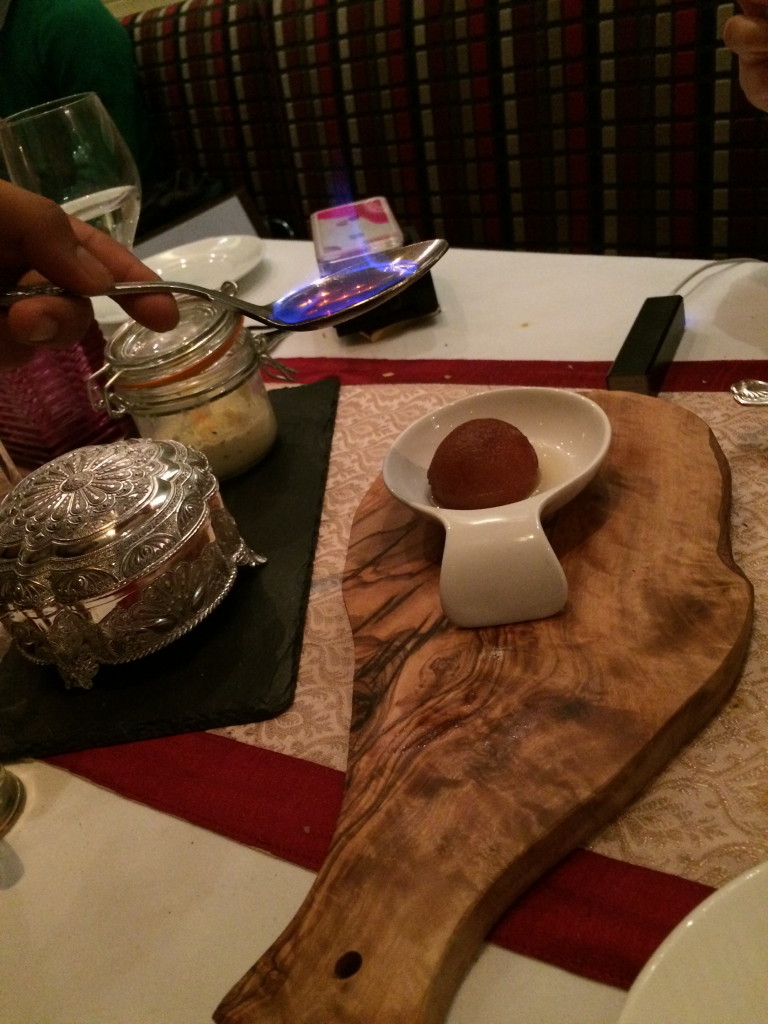 There is no doubt in my mind that I will return to Gaylord. The food is exceptional, the service 10/10 and the venue ideal for a night with a group of friends or for just a romantic meal for two. As you can see, I tried everything (literally!) on the menu, and when I go back I will definitely choose the golgappa shot, prawns, butter chicken and puffer bread. Hopefully they have kulfi on the menu as I wasn’t a fan of the puddings, and I might treat myself to one or two cocktails as well.

Have you ever been to Gaylord? Let me know what you think in the comments.