Bread week is never one of my favourites on the Great British Bake Off, as I always have trouble getting my dough to rise when I make anything which has yeast in it. But greed prevailed, and I got a craving for chocolate Chelsea buns (replacing that boring dried fruit with chocolate), so came up with these double chocolate and cinnamon Chelsea buns.

The double chocolate comes from both the dough, which includes cocoa powder, and the filling, which is packed with chocolate chips. I couldn’t actually find any recipes for Chelsea buns with cocoa in the dough, so these probably cannot really be classed as them, but I will assume some artistic license here. 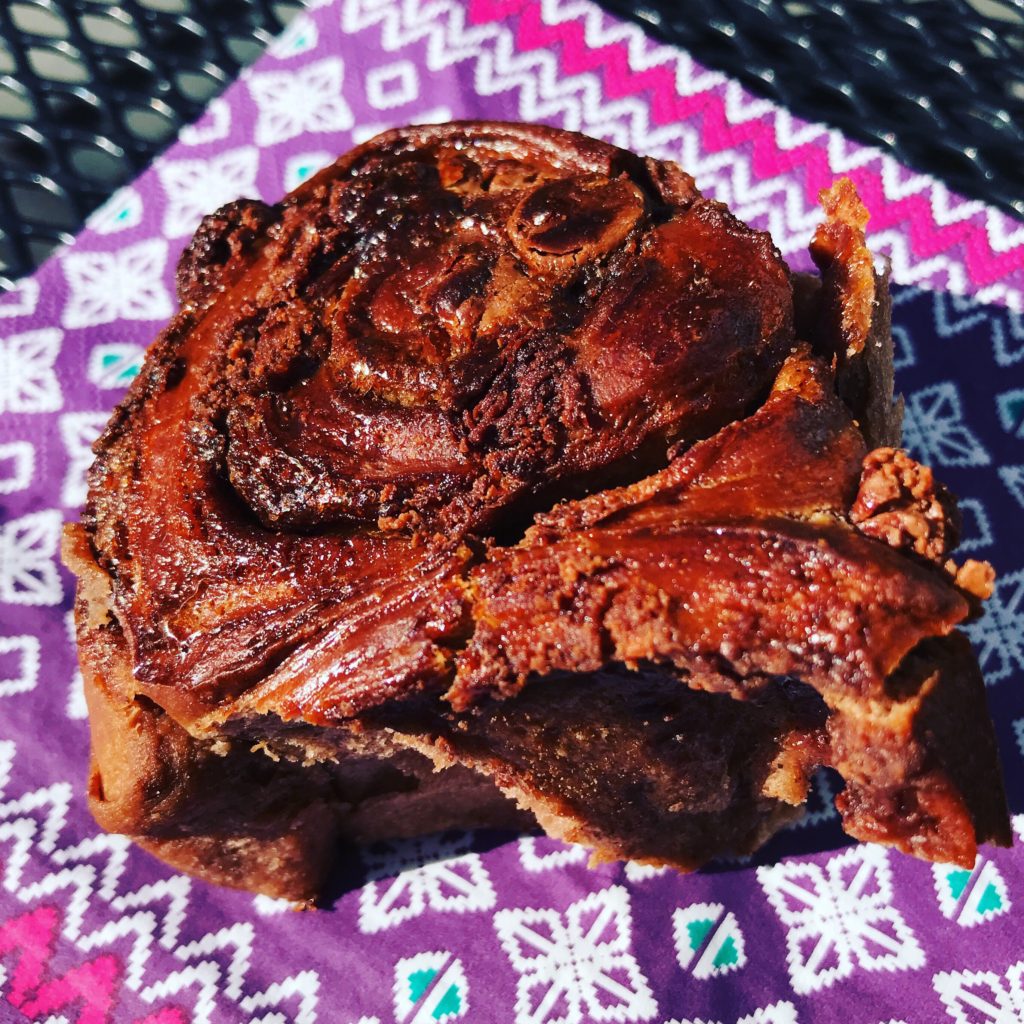 In fact, these are probably a combination of Chelsea bun and cinnamon bun, and very nice they are too. I used this recipe as my base but with a few tweaks (and a much longer proving and cooking time), and my double chocolate and cinnamon buns turned out beautifully. Not too sweet, with a warming hint of cinnamon and smooth nuggets of chocolate chips to add texture and bursts of chocolate flavour. And, it goes without saying, the requisite stickiness essential in a Chelsea bun!

Melt the butter in a saucepan and then add the milk, heating gently. When blood warm, mix in the yeast. In a separate bowl mix together the flour, cocoa powder, caster sugar and salt, and then combine with the buttery milk.

You need to stir the mixture until combined, and then knead the dough for 5 minutes (I do so in my KitchenAid freestanding mixer). You want to end up with a smooth and springy dough that is a beautiful chocolate brown colour. Leave it to rest for around an hour, covered in clingfilm and a tea towel, in a warm place (I briefly heated my oven and then turned it off and put the bowl of dough in there – it gave me a fantastic rise!). 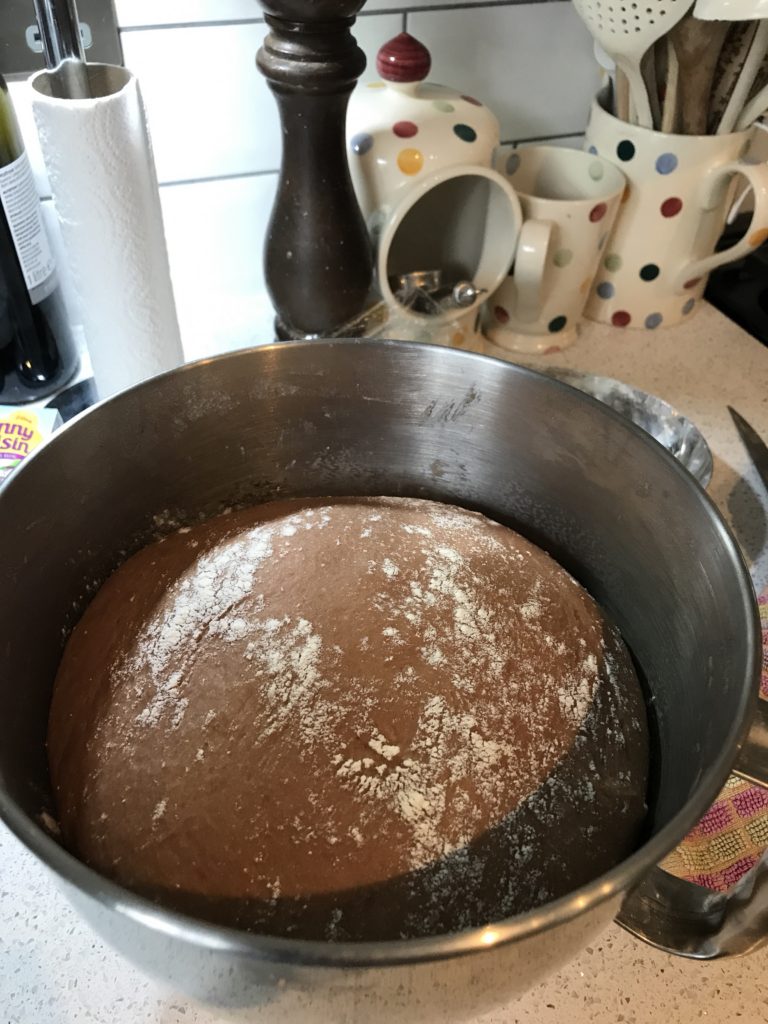 Once risen, punch the dough back down again and roll out until a rectangle shape (it should be approximately 5mm thick).

Mix together the butter, sugar and cinnamon to a smooth paste and spread the mixture over the dough. 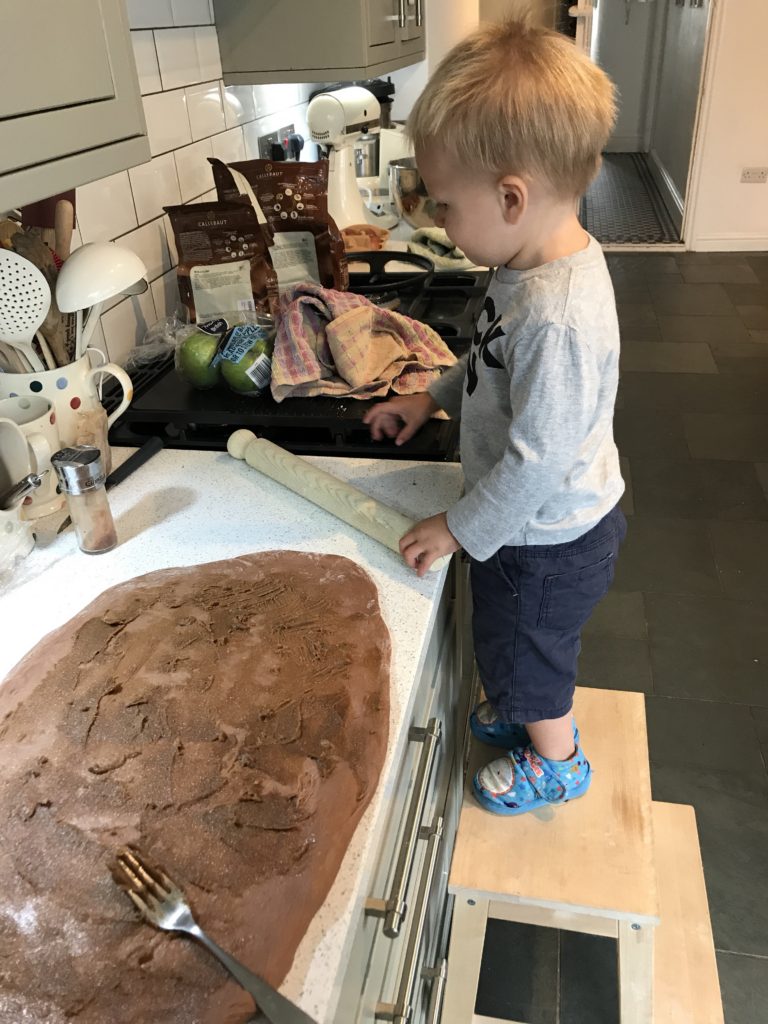 Sprinkle with chocolate chips (assuming your assistant doesn’t eat them all …). 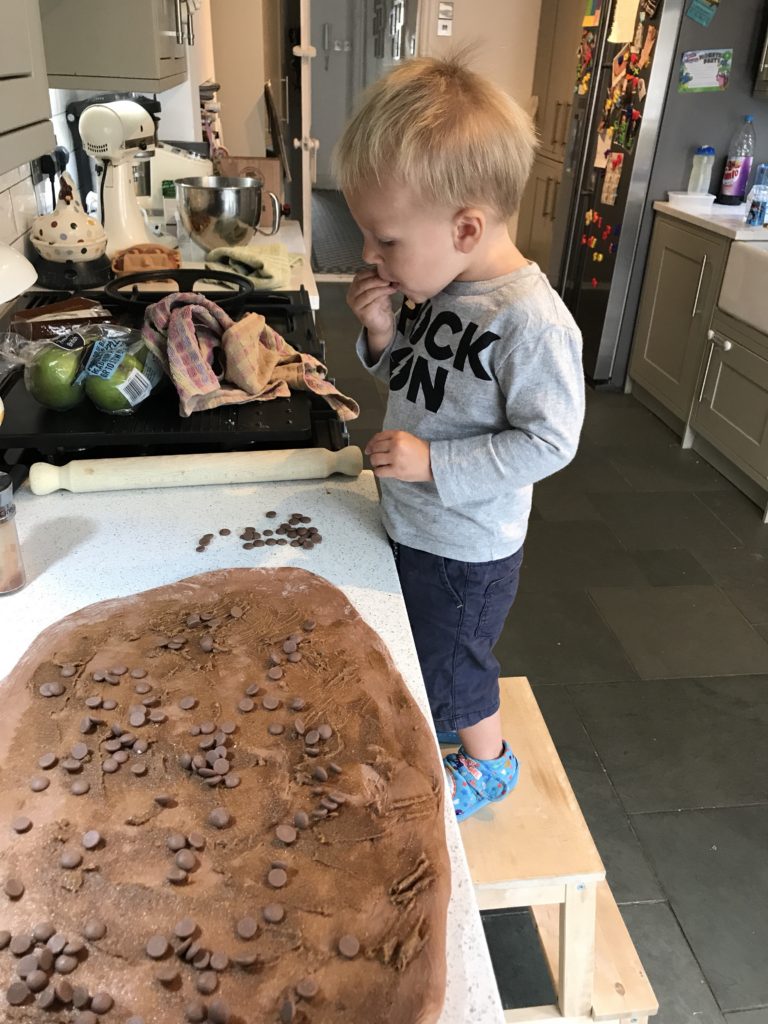 Roll the dough, starting at the short end, so it resembles a fat sausage, and then cut into 12. 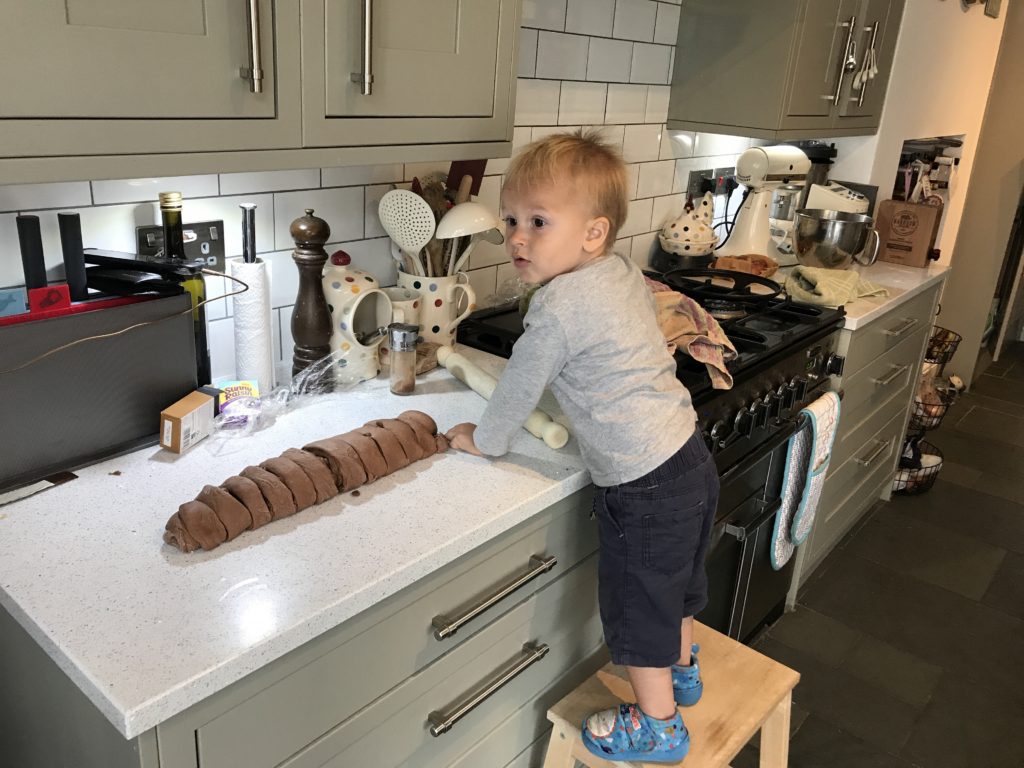 Lay each bun in a baking dish (I used a round silicon one for the majority of the buns but didn’t have enough space for all of them so used a second silicon loaf dish for the remainder). 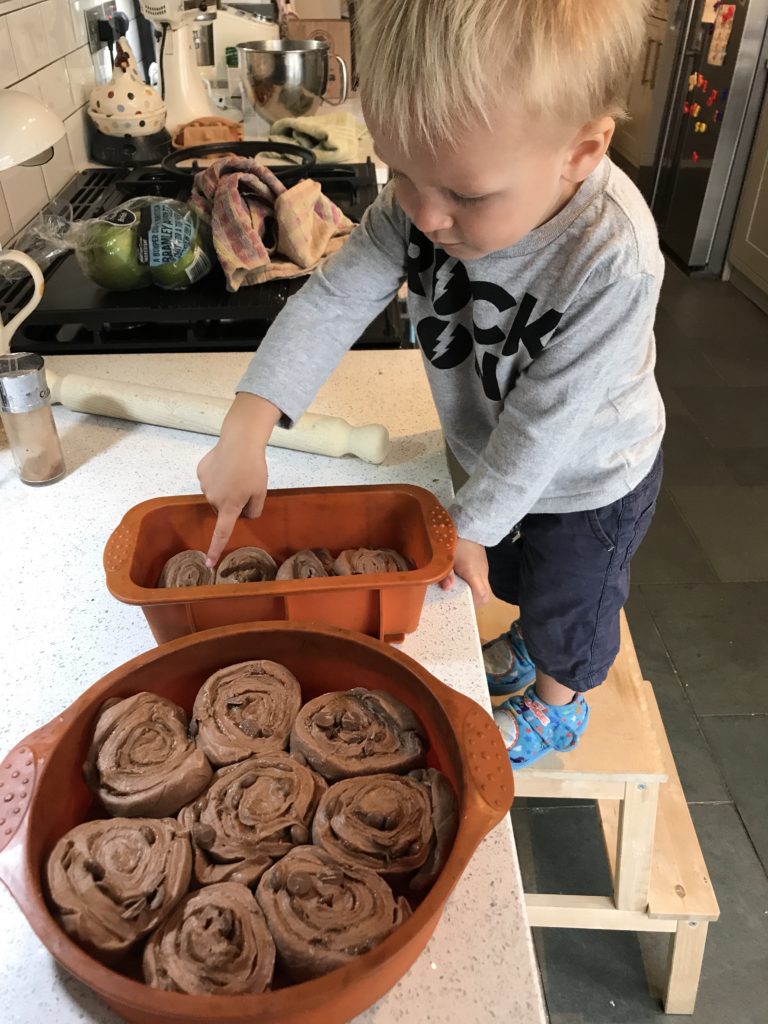 Cover with clingfilm and leave to prove again for 25 minutes, whilst the oven pre-heats to 180 degrees.

Brush the buns with beaten egg and pop them in the oven for around 40 minutes. It’s not so easy to tell if they are cooked because the dough is brown anyway, so I pulled a bit of dough out from the centre of the buns to check whether the dough looked cooked. You may need a bit longer if the dough is still looking under-cooked in the middle.

When you take the buns out of the oven, cool them on a wire tray and then tear and share these delicious double chocolate and cinnamon Chelsea buns! 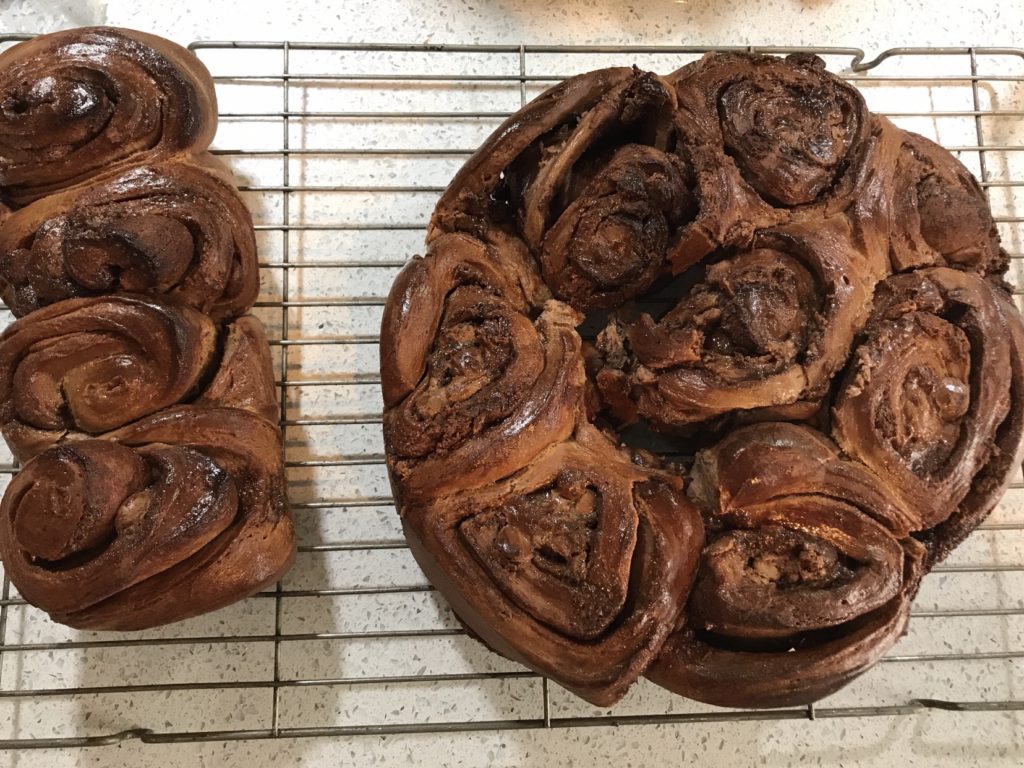 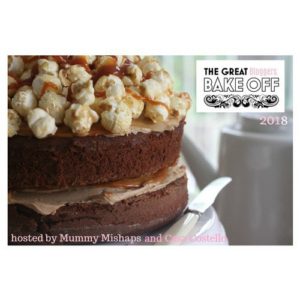 Once again I am linking up to Jenny from Mummy Mishaps, who is hosting a Great Bloggers Bake Off, along with Helen from Casa Costello. Through the link-up you can see all of the other delicious recipes which have been baked as part of the linky, so do take a look.