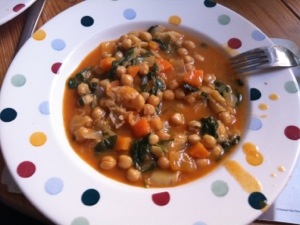 Apologies for the recent silence (which you may, in fact, be grateful for) but I have been away in beautiful Brugge and also been suffering with a nasty cold, so not really fancied being sat in front of the laptop typing about food. I am still sick with that nasty taste in your mouth you have when you get a cold where you either go off food completely or want to eat everything in sight. Unsurprisingly my body has chosen the latter route, so I have decided that writing about food might distract me from eating it …

So, my lovely Spanish colleagues Elizabeth and Emma gave me the ideas for a Spanish meal which I decided to cook during the last bank holiday weekend. Normally when I think Spanish, I think tapas, but Emma had shared with me a traditional Easter Spanish dish called Potaje Vigilia – a combination of salt cod and chickpeas in a paprika based stew – and I was quite desperate to try it. Then when Green Lanes Fishmonger had salt cod available, it was like cooking destiny, and I had to give it a try.

Elizabeth had bought Sobao Pasiego cakes for us to try at our last elevenses, and I thought the light and buttery cake would be perfect to have after the healthy stew. When Elizabeth proposed some Pa amb tomàquet to start the meal, I knew I was going to be on to a winner.

It was almost brilliant. The tomato bread to start and the cake for pudding were absolutely perfect, but the potaje was – if I am honest – quite a lot of effort for something which was nice but not spectacular. It’s always difficult to make a dish when you have never tasted or seen it before, especially if you have never cooked with one of the main ingredients (salt cod in this case). The recipe I had was not especially detailed, which usually would not bother me, but the whole situation has made me doubt whether I really did the potaje justice.

Salt cod is frankly a pain in the neck to prepare. You have to soak the piece of cod in regularly refreshed cold water until the water no longer tastes of salt. I put mine into soak on Saturday morning and it was ready by Monday afternoon. Then you can simply flake the raw fish away from the bone and skin with relative ease, although it’s such a weird texture for raw fish to have that it does seem strange. My bit of fish still had a bit of fin on the skin which expanded when I touched it, and kind of freaked me out, but I am a bit weird like that so I can’t really blame the potaje for this!

Also, the salt cod is very strange in that it makes the potaje STINK of fish, but the stew doesn’t actually taste that strongly of fish – it was quite disconcerting.

So, onto the recipes …

4 slices of lightly toasted white bread (I cut from a small unsliced bloomer), one large or two small very ripe tomatoes, a small amount (quarter of a teaspoon) of lazy garlic, a drizzle of olive oil, a pinch of sugar, salt and pepper

Finely chop the tomato into a bowl and mix with the other ingredients, mushing them together to a pulp. Spread over the toasted bread and eat immediately. YUM!

Some salt cod (I didn’t weigh my bit but it was about the size of a kindle!), a couple of handfuls of chickpeas, 3 onions, 3 carrots, a teaspoon of lazy garlic, a large tablespoon of paprika, a bayleaf, a teaspoon of flour, olive oil, some chopped spinach, salt and pepper

Soak the salt code for at least 48 hours before you intend to use it, and the chickpeas overnight. Put the soaked chickpeas in a pan of water with a halved onion, a halved carrot and a bayleaf, bring to the boil and simmer for two hours or until the chickpeas have softened. While that’s happening, flake the salt cod away from the skin and bones. In another pan, fry the chopped onions and carrots with the lazy garlic in the oil until softened. Then add the flour and paprika and stir in well to avoid any lumps. Add a small amount of the chickpea liquid to the flour paste and stir in until well combined. Keep adding the liquid until you have a thin stew, then add all the chickpeas to the mix. Cook for 10 minutes (to ensure the flour is cooked out) and then add the salt cod and spinach. Cook for another 10 minutes and then serve with crusty bread to mop up the juices.

Sobao Pasiego – I halved my mixture to make a loaf cake, but you could double these amounts for the correct sized cake

Cream the butter and sugar together and then add the eggs one at a time. If the mixture starts to curdle when you add the egg, add a spoonful of flour to the mixture to stop the curdling. Add the vanilla and rum (you could also use an aniseed flavouring). Then add the rest of the flour and combine well. Line the cake tin with baking parchment (the traditional way is to bake the cake in a square tin lined with greaseproof paper and fold the corners of the paper onto themselves so the paper makes a kind of basket for the cake), pour the mixture in and bake at approximately 180 degrees for around 25 minutes, or until a cake skewer comes out clean.

This cake was lovely on its own but would be delicious with some stewed fruit and cream. It’s like a light madeira cake.

I recently joined this new initiative, described as a “monthly blogging event” which allows us bloggers to expand our horizons a bit and challenges us to blog about new kitchen experiences. As I was a salt cod virgin until my Spanish extravaganza, I decided to launch myself onto Our Growing Edge with this post. It’s a great way to make sure I don’t rest on my laurels too much with my cooking, and I can’t wait to read other people’s May submissions. Find out more at Our Growing Edge.