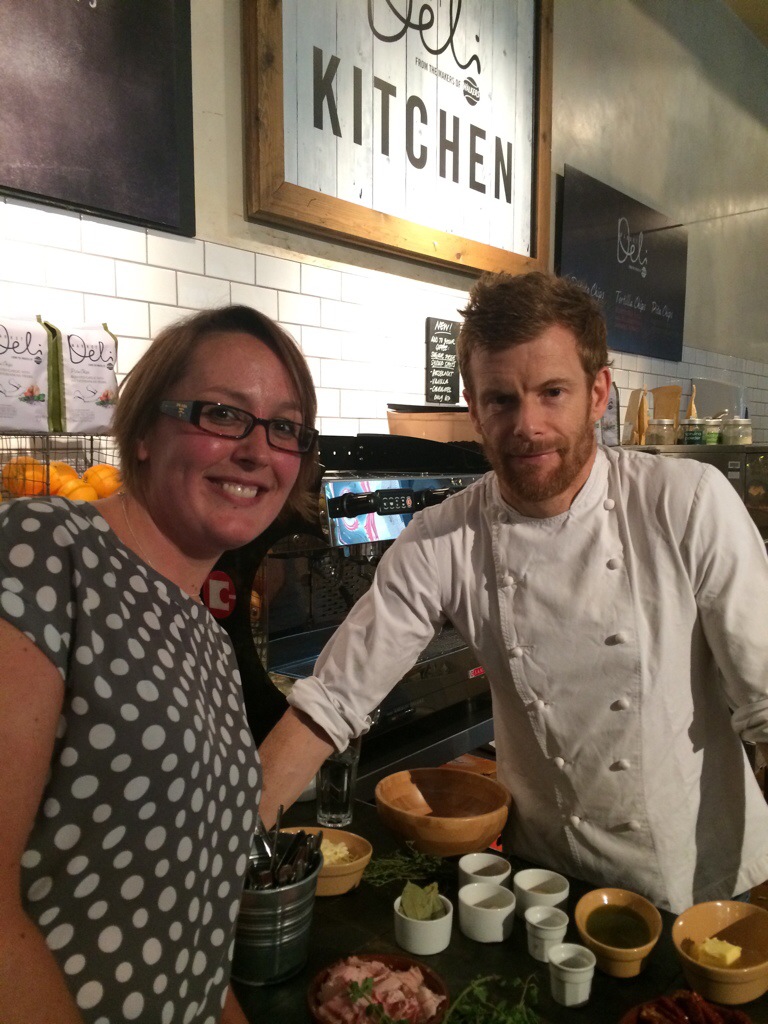 When I was asked if I’d like to attend a product launch for Walkers’ new product range and write a blog post about my experiences, my greed-ometer was on high alert as I envisioned big bowls of free crisps. When I was told that the chef Tom Aikens would be doing a cookery demo at the event, I could not have RSVP’d more quickly. Free food and celebrity chefs, and the chance to write about my greedy experience? Three of my favourite things, thanks very much (I am not sure what I would have done if they’d added some free kittens to take home into the mix!).

I love crisps. I don’t really understand the point of ready salted ones though, and I find if you eat cheese and onion your breath stinks for the rest of the day so I try and avoid them. Salt and vinegar I can take or leave. My favourites are bacon, chicken and prawn cocktail. There’s something a bit weird about prawn cocktail flavour crisps that I feel I shouldn’t like, but I do. A lot.

I am also the type of person who could eat a multi-pack in one go … I don’t because I know it would be wrong, but the thought is always there.

So as I walked to the event, dreaming of multipacks of bacon crisps, I was intrigued by what Walkers would have on offer as part of their new range, and how Tom Aikens would be relevant to the launch of ‘Market Deli’ (the name of the new range). 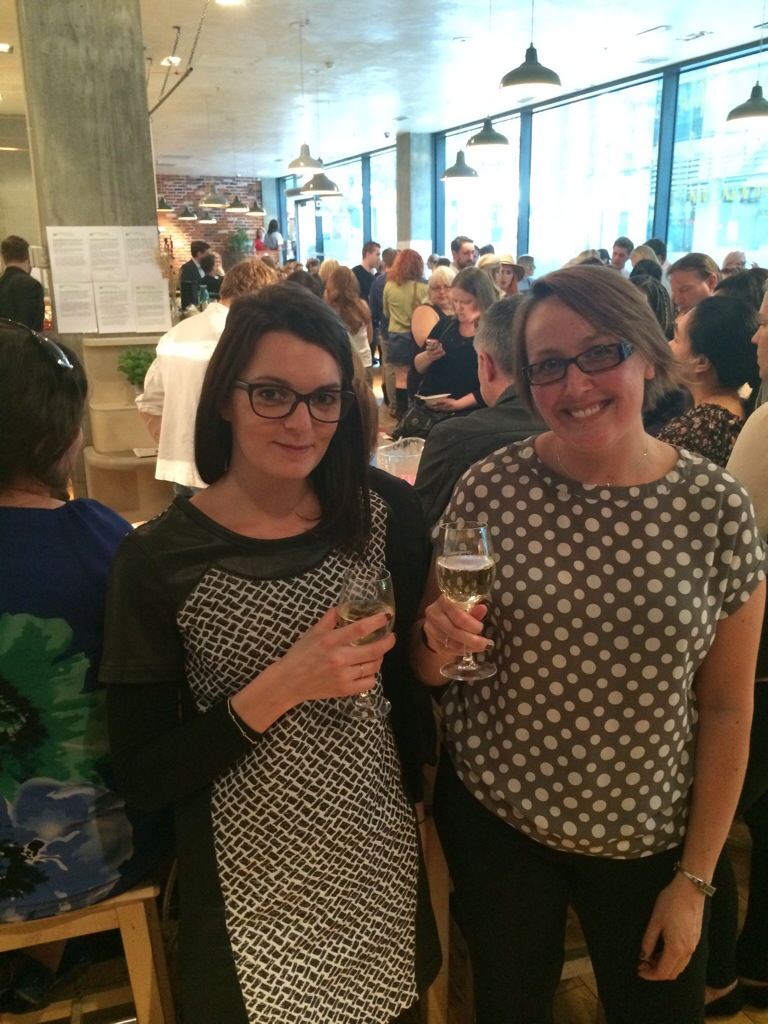 When I arrived at the venue (a deli in the City which had been rebranded ‘Market Deli’ for the night), I was immediately offered a choice of wines by a charming sommelier from Corney & Barrow who explained that she and some other wine experts had been invited along to taste the Market Deli range and propose some wines to match their flavours. It sounded a bit OTT to me but I was told that because Walkers had chosen the ingredients for the range so carefully, focussing on the provenance of the ingredients to ensure the best possible flavours, it was possible to match wines to the distinctive flavour combinations of the crisps.

So after that explanation, and a brief welcome speech from Tom where he shared his own interest in sourcing top-quality ingredients from artisanal producers (he owns a deli and apparently his parents also did when he was a child), we were taken around in groups to explore the Market Deli range in more detail. 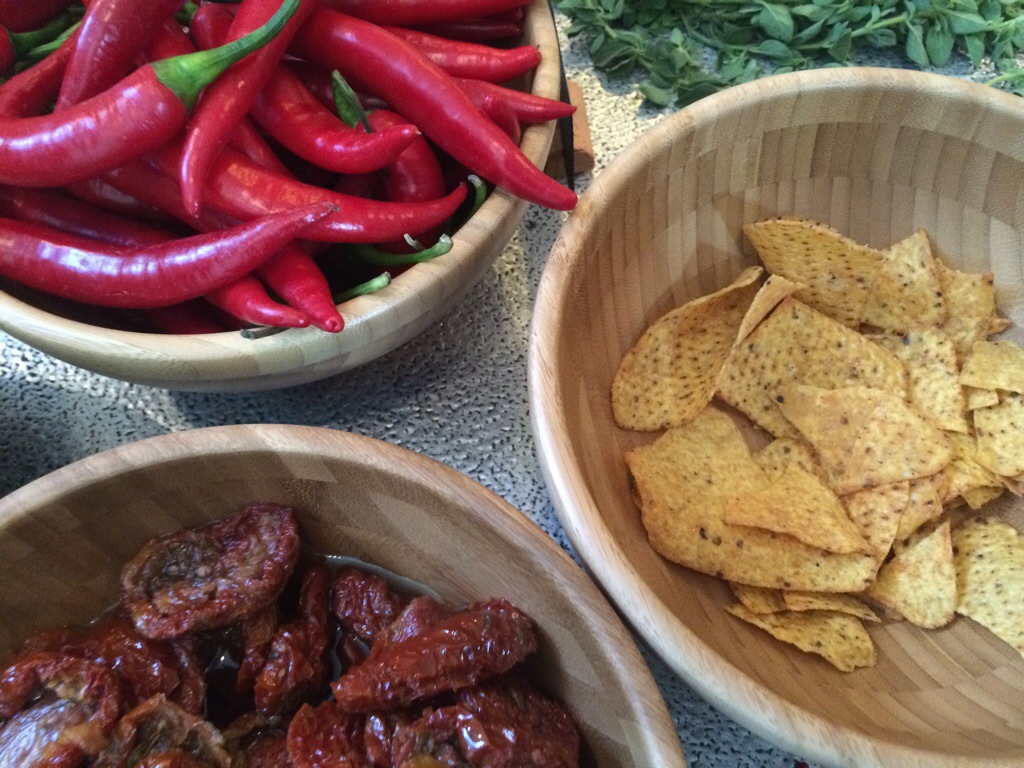 My first stop was at the tortilla chip table: anglesey sea salt and black pepper; and roasted red chilli with mediterranean sundried tomato flavours. Alongside a large bowl of tortilla chips for us to sample were the key ingredients so that we could try those as well. Each of our crisp guides was keen to explain the provenance of each ingredient (the sundried tomatoes came from the renowned Manisa region in Turkey for example), and seemed genuinely proud of the Market Deli range. 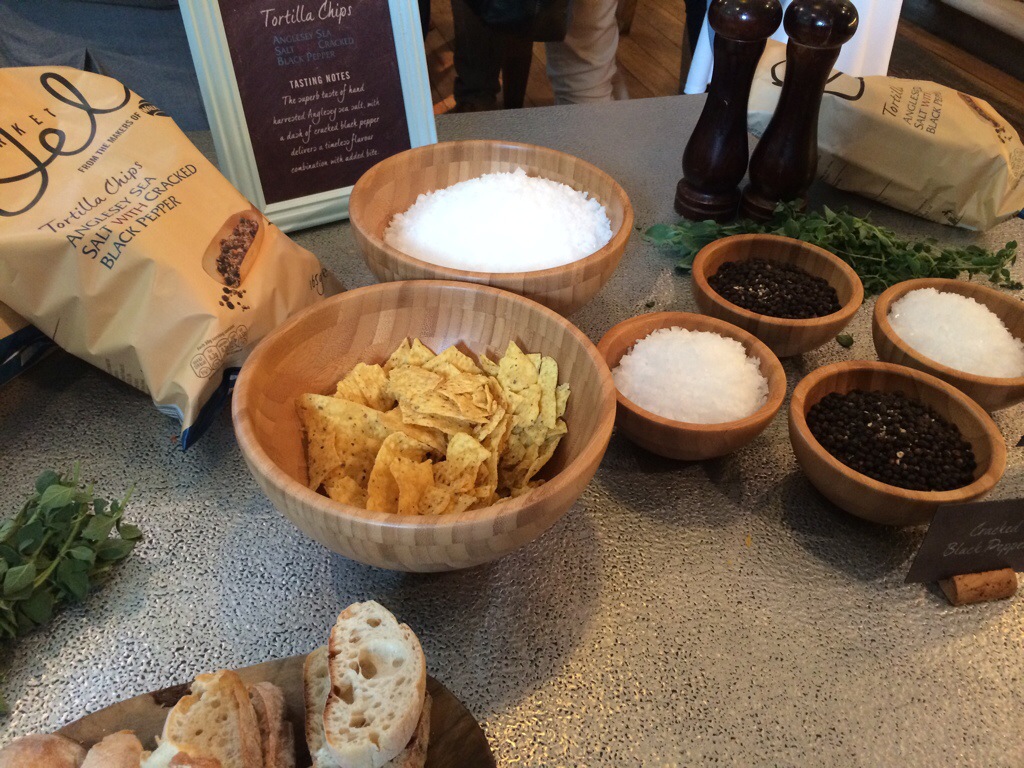 We moved on to the pita chip selection next: roasted garlic with mediterranean herbs; and roasted red pepper with English tomato flavour. I was told that unlike other pita chip manufacturers, Walkers actually make the pita bread themselves and then bake it and add the flavours. Again, we were encouraged to try the raw ingredients to help us to understand their importance, and so we got to eat juicy sweet tomatoes from Worcestershire (I am not a particular fan of raw tomatoes, but felt obliged to try them and I admit they were full of flavour). 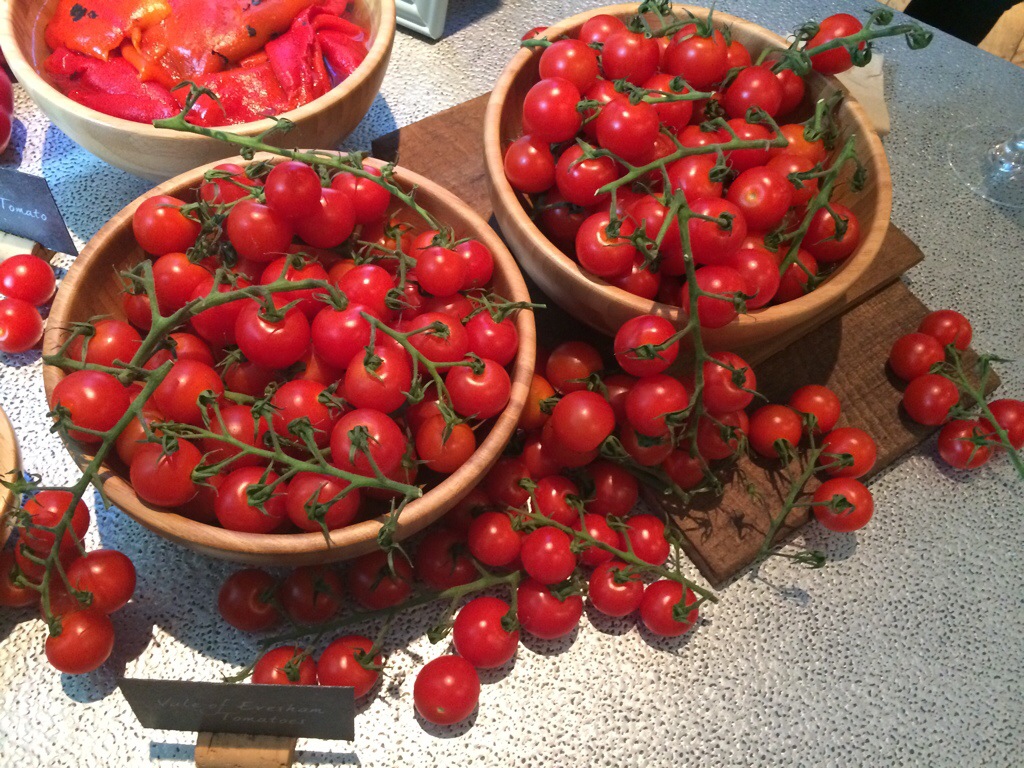 Finally onto the classic potato chips – although these ones were clearly of the premium brand variety in terms of taste and texture: Cornish mature cheddar; Wiltshire cured ham, mature cheddar and farmhouse chutney; balsamic vinegar of Modena; and flame grilled Spanish chorizo with roasted onion. Again, we were offered bowls of cheese, ham and chorizo to taste to appreciate the link between the original ingredients and the flavour of the crisps … I must say it was a bit of a dream come true to be presented with such a large bowl of cheddar, and mountains of crisps, and be encouraged to tuck in whilst quaffing well-matched wine! 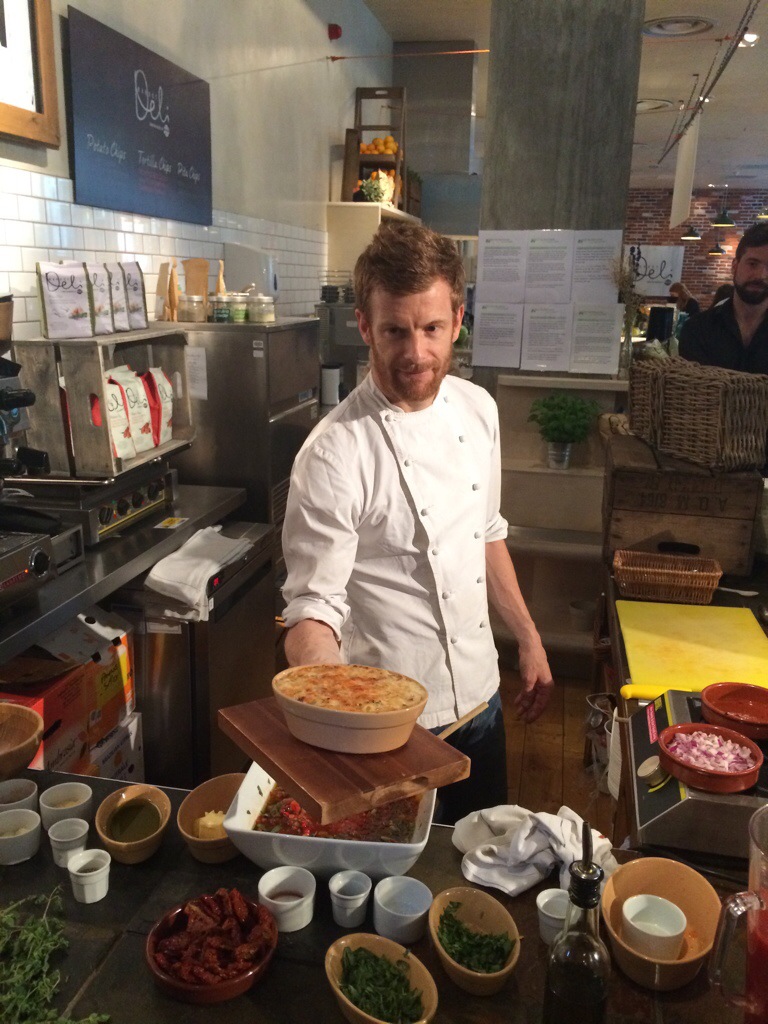 We also got to watch a cookery demo by Tom. He used many of the ingredients used to flavour the crisps to make macaroni cheese (with ham and various herbs in the bechamel sauce), and gazpacho soup. We also got to try his dishes, and I have to say that both of them were really good, and I plan to try and replicate the gazpacho soup for this very blog as the flavours were superb (and that is from someone who doesn’t like the taste of raw tomatoes!) – I’ll keep you posted.

After the demo I wandered around the tables again, trying more crisps (purely for research purposes you understand) and ingredients, as well as the odd canape or three when one of the waiters sailed past me (also using those now familiar ingredients). 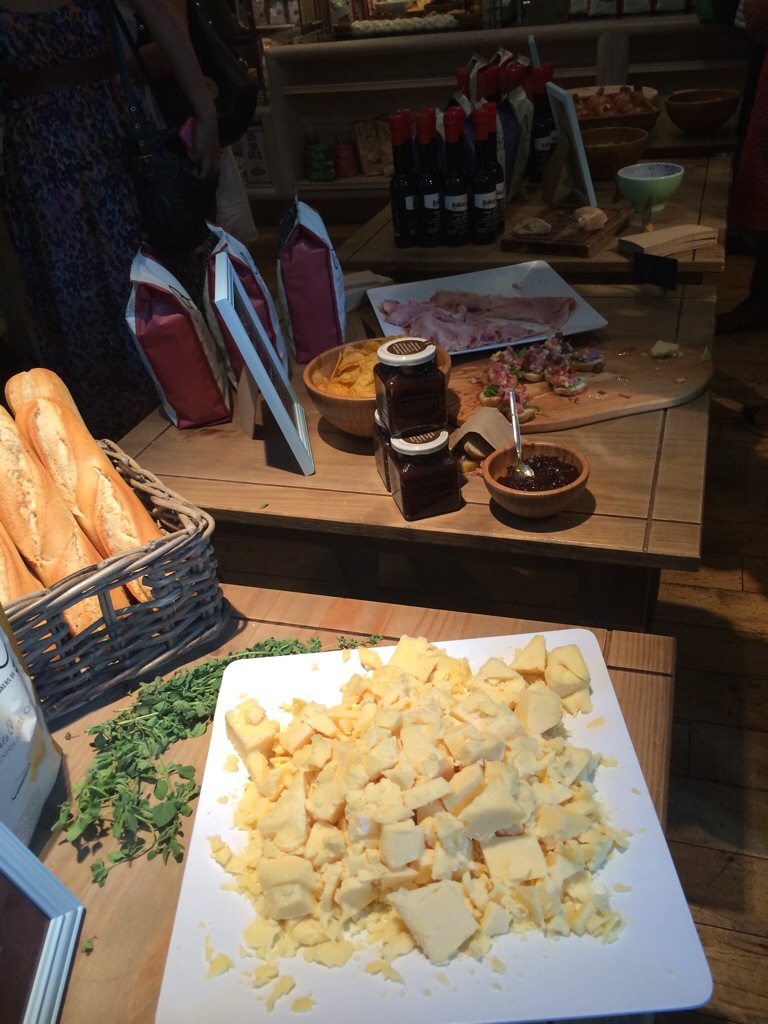 Without doubt my favourite of the Market Deli range was the roasted garlic and herb pita chips – they had a lovely generous coating of garlicky, herby dust, and a light and crunchy texture. I could have eaten them all night! In fact the other pita chips (red pepper and tomato) were hugely successful with the other guests and ran out completely quite early in the evening, so I only tried a few crumbs which were left in that bowl.

The tortilla chips were very nice but I didn’t think the salt and pepper ones had a strong enough flavour for my tastes (although other people were raving about them) and the roasted chilli and sundried tomato ones were nice enough, but tomato isn’t my favourite flavour (unless it is in Tom’s gazpacho!) so I can take them or leave them. 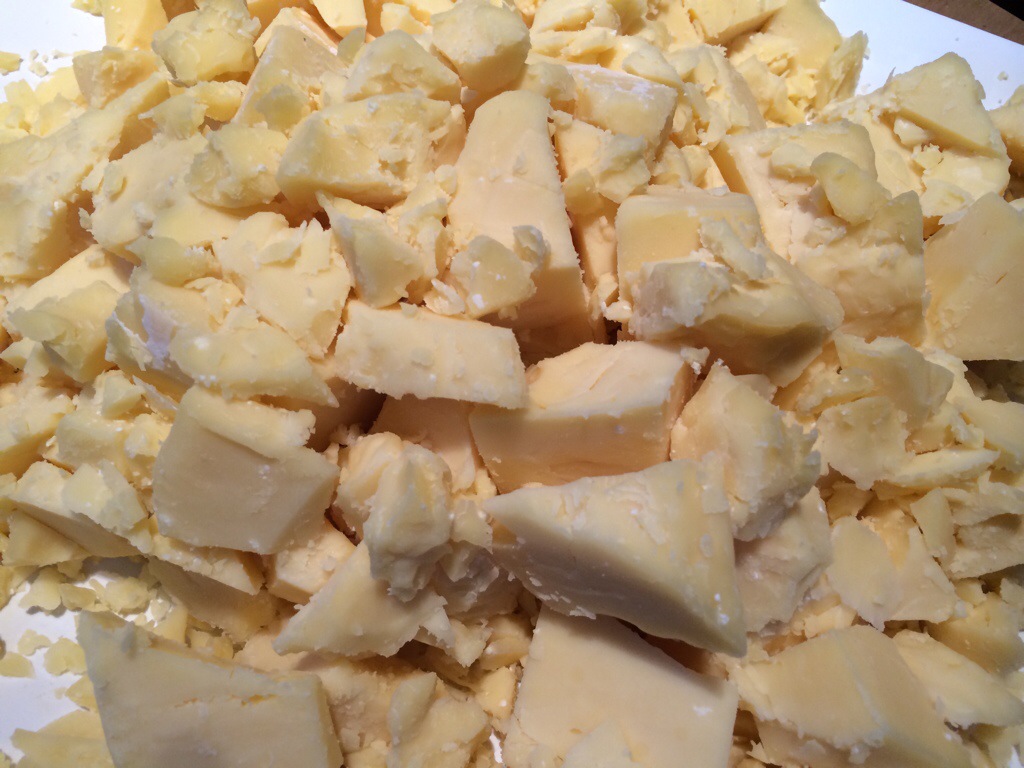 Out of the traditional crisps I absolutely loved the ham, cheddar and chutney flavour: I could definitely taste the individual ingredients in the crisps and they were very moreish. I know that Andrew could get addicted to the smokey chorizo and onion ones, as he love spicy crisps. I was a bit underwhelmed by the balsamic vinegar crisps and wouldn’t buy them, and the Cornish cheddar ones were nice enough but I’d rather just eat great chunks of the cheese on its own!

So would I go out and buy my own? Yes I would, although the price tag is as premium as the crisps, with a sharing bag retailing at £2.39. The Market Deli range was released this week, and next time I have friends over I’ll definitely buy a couple of bags to snack on with drinks: the garlic and herb pita chips; the ham, cheese and chutney crisps; and the chorizo crisps for Andrew!