I have received a few goodies to review over the last couple of months – here’s a selection for you. 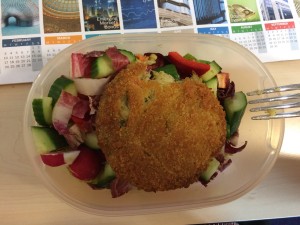 I’d never heard of Mash Direct until I was sent a box of their veggie burgers to review, and in the same week received a free pack of mashed potato in my Ocado shop. The burgers and mash were both nice enough (there’s nothing in the word which would convince Andrew to have a meat-free burger but topped with a poached egg or as a side dish he’d no doubt manage to eat a couple) and I was impressed by the background of Mash Direct, who farm all of the ingredients in xxx and never use any artificial nasties in their produce. They are also gluten free, in case that kind of thing floats your boat. Take a look at their range here. 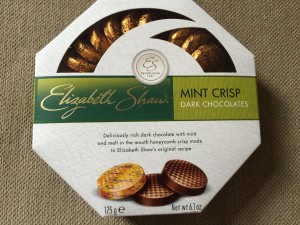 Verdict: there’s a time and a place for minty chocolate, and in my view that’s at Christmas, so these won’t regularly be appearing in my shopping basket but if I was to receive a box as a nomination I am sure I’d be able to make an exception ;). 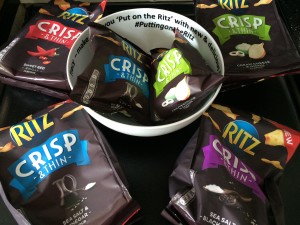 I was surprised (but of course very happy) to receive a box of new Ritz crisp & thins recently, alongside a personalised snack bowl. These crispy little snacks pack a powerful flavour punch and I particularly liked the salt and vinegar ones. Andrew is usually a sweet chilli fan but didn’t enjoy the Ritz version (and man alive, they made his breath stink) but I gave a pack of the cheese and onion ones to my mum and she ate the family-sized bag in one sitting! A thin cracker more than a baked crisp, they have less fat and calories than a reular potato crisp, so are a good way to feed your crispy craving without breaking the calorie bank.

Verdict – a great alternative to crisps, and I’d buy them as a snack to have with drinks. 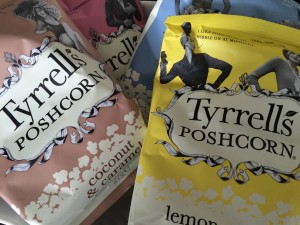 Mmmmm, I do love a bit of popcorn, especially sweet and salty flavour. You get a lot of popcorn for a relatively small amount of calories so I find a bag of popcorn to be a great little snack. My friend Marie-Anne has recently shared a recipe with me for sweet and salty popcorn but until I try and make it I am happy to fork out for a bag of the good stuff. Tyrells (whose crisps we love) recently sent me a selection of their poshcorn range, and I tried lemon cupcake, coconut and caramel, plain salted, and sweet and salty.

I think that sweet and salty will always be my favourite, but coconut and caramel comes a close second – very tasty indeed. More here.

Verdict – sweet and salty is the best. 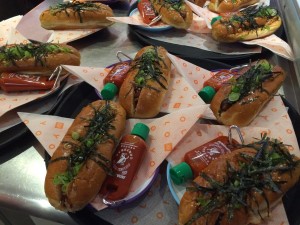 Not only do I get sent things, but sometimes I get to go to events as well, and just before my birthday I was invited to Yo Sushi to sample their new menu. It turns out they don’t just do sushi, but are launching a new menu item each month over summer, and first up was a Yo dog: a hot dog with srichaya sauce and an Asian twist, which was utterly delicious. They also had bags of chips which you season using the ‘salt and shake’ technique, and black sesame ice cream with apple gyoza (dumplings) and caramel sauce served in a syringe. Okay, it’s all a bit gimmicky but you can’t argue with the flavours.

Verdict – I loved them all but you won’t like the chips if you aren’t a fan off soggy chips (I am). I’d go back again every day for the ice cream and apple dumplings (mmmmm, and syringe that caramel sauce straight down my throat!). 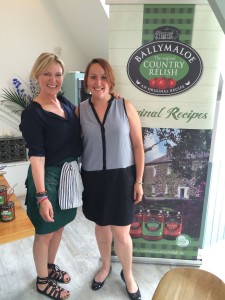 Once again this was an event I attended to celebrate the launch of Ballymaloe original country relish in the UK (it launched in Ireland several years ago and has been extremely successful). As well as being a renowned cookery school and hotel, Ballymaloe is perhaps best known for training TV personality and chef Rachel Allen (who subsequently married into the family, and now lives and works there).

I went to Cactus Kitchens in Clapham (where Saturday Kitchen is filmed) to meet Rachel and have a cookery demonstration with her, using Ballymaloe relish. I am actually already a fan of the relish as my friend Annette bought me a selection when she visited me from Cork, but I was delighted to receive a few additional pots for my collection, which I will definitely be using to make some of Rachel’s delicious recipes.

Rachel, as I’d been told by fellow food bloggers, was absolutely lovely, and so were the Allen family members who organised the launch event. I had a lovely time there and wish I could have stayed for longer (I had to rush back to work).

Verdict – a staple in my cupboards.

Thanks to all the companies mentioned for my samples / invitations.