I bought Jamie Oliver’s 15 minute meals at the end of last year, and whilst I would not recommend it as a quick way to cook (it’s not unless you have every gadget in the kitchen and someone to do your washing up for you) the recipes are easily adaptable and very tasty. I thought I would share a few of the recent successes on here (photos at the bottom of the page or on my twitter feed) plus a few other recent goodies I have made.

Here is the actual recipe, but this is how I did it: put the pasta onto boil in salted water (I used wholewheat spaghetti). In another saucepan sautee the sliced chorizo in a little olive oil (just enough to coat the base of the pan as the chorizo oozes fat when it cooks) and a sliced red onion. In a jug beat an egg, a couple of spoons of yoghurt (you could miss the yoghurt), a squirt of jiff lemon and some grated cheddar cheese (no manchego in the house). When the pasta is cooked, drain it but retain a cup full of cooking liquid. Chuck the pasta into the chorizo saucepan and remove from heat. Coat the pasta in the oily meaty juices and add the egg mixture and stir around. Add the cooking liquid slowly (you might not need all of it – I used half) to get the consistency you want – which is a light sauce which you could mop up with a bit of bread, but not too saucy.

The original recipe is not online but that’s okay because I freestyled completely. I baked the sausages in the oven as usual and cooked pasta shapes in boiling salted water. Once the pasta was cooked, I used the same saucepan to sautee the following in a tiny bit of oil – onion, garlic, chilli, cherry tomatoes and red peppers. Once cooked I stirred in the chopped cooked sausages, and mixed in the cooked pasta. It’s not saucy, so you might want to add some tomato paste or a tin of tomatoes instead of cherry ones if you prefer a sauce. This was nice and light though, and really tasty. And when there is no sauce, there is less danger of eating too much bread when you mop it up!

Again, no recipe but this is how I did it (which was inspired by Jamie but didn’t religiously follow his recipe). Put wholemeal rice on to boil in salted water. In a pan sautee a sliced onion, sliced chicken breast, sliced peppers and garlic with a good shaking of paprika, salt and pepper. While that is cooking grate carrots, white cabbage and onion into a bowl and mix with some salad cream and mustard (Jamie often uses lemon juice and low fat yoghurt but I like salad cream) to make your coleslaw. When the rice is cooked, mix with a tin of kidney beans, chopped cherry tomatoes and chopped coriander. Serve with wholemeal tortillas and grated cheese.

It’s only the lentils here which are inspired by Jamie’s recipe (I think the original recipe is spiced chicken, bacon, asparagus and spinach lentils), but I’ll share the whole thing as it was so delicious. In a casserole dish, flatten out chicken thighs (skinless and boneless) and coat in a small amount of olive oil, crushed garlic, dried thyme, lemon juice salt and pepper. Bake in the oven for around 30 minutes, turning halfway to ensure even cooking. Just before you are ready to eat the chicken, sautee some chopped onion and carrot in olive oil with garlic. When soft, add a tin of lentils including the juice from the tin and stir through, along with salt and pepper and a glug (a couple of capfuls) of red wine vinegar. In Jamie’s recipe he suggests stirring in a chopped large tomato but I didn’t have one so just stirred in a squirt of tomato paste (it would be nice with a tomato though). Then stir in a bag of fresh spinach (less if you are not such a fan but I wilted in a whole 250g bag and it was lovely), check for seasoning and spoon onto a plate with the cooked chicken on top.

Last one is my traybake

Okay, this originally stems from a Nigella recipe which I saw years ago on her TV show. Use any meat which can handle a decent amount of cooking in a hot oven, eg pork chops, chicken thighs / legs (her original option) or sausages. Cut unpeeled potatoes into chunks (works with old or new potatoes) and mix with chopped onion and peppers (sometimes I don’t bother with peppers), olive oil (the more the better but if you are being healthy you just need to lightly coat the veg to stop it catching) and minced garlic, plus lots of salt and pepper, and dried thyme if you have it (works especially well with chicken). Then lay your seasoned meat on top of the veg and bake in a hot oven for a good 40 mins, taking out occasionally to stir the potatoes and turn the meat. Serve with green beans or any other boiled green veg (I find that it cuts through the oil better). Hardly any washing up required! 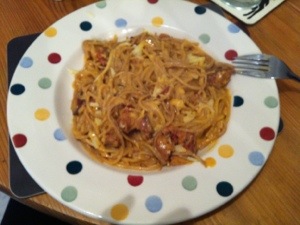 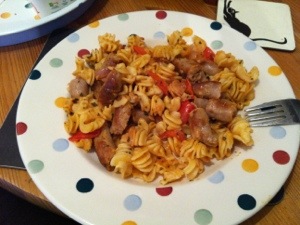 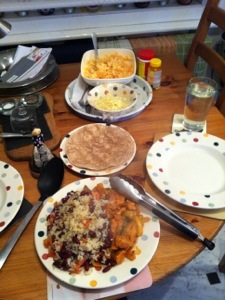 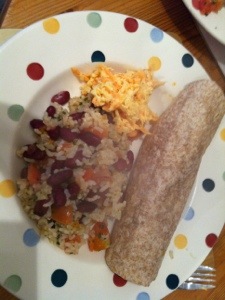 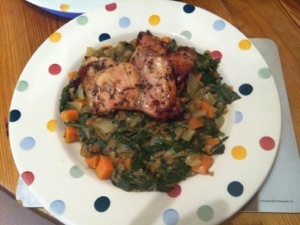 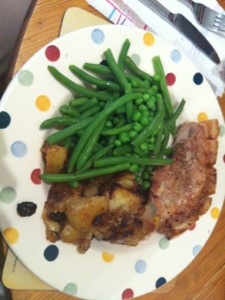 One Reply to “Thank you Jamie (and Nigella, as always!)”