Ever since I moved to this part of North London, which is home to well known Greek and Turkish restaurants, I have been intrigued by the Mauritian restaurant near Turnpike Lane called Le Chamarel. And what better time to give it a try, than when Jo and Charlotte want a new location for the latest Alphabet Adventures.

The restaurant is just a few minutes walk from Turnpike Lane station, and looks much more like a cafe than a restaurant. Clearly popular, people were in and out all night, including for takeaways and they were off delivering to places as well.

While Jo and I waited for Charlotte to arrive we asked the waiter to bring us a selection of starters. Seeing our keen interest in Mauritian food, he offered to bring a variety of street food to us – mainly vegetarian – along with some unbelievably spicy dips to go with them. 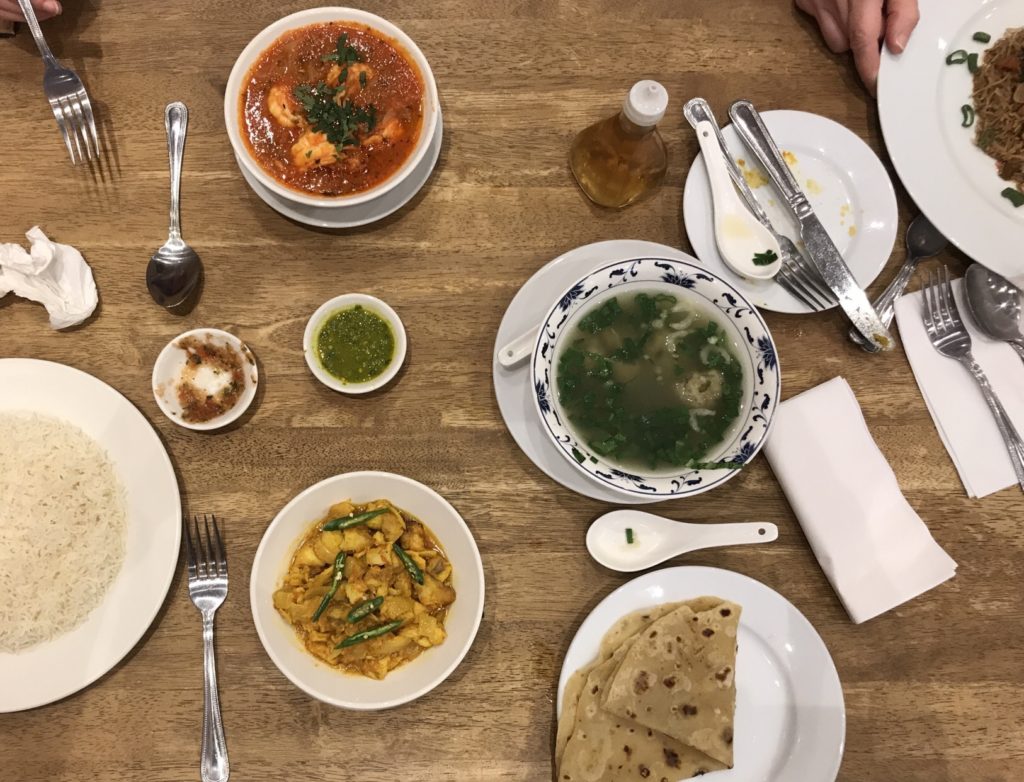 I am familiar with some Mauritian food following a holiday there a few years ago, and I immediately remembered the innocuous sounding chutney which had more fire than Andrew had ever tasted, and led to him crying and hiccuping the way through the rest of his meal! Jo is normally quite brave when it comes to spice so gave it a try, but was defeated by the heat. So if you do go to Le Chamarel, make sure you are cautious around the chutney! It ain’t no Branstons … 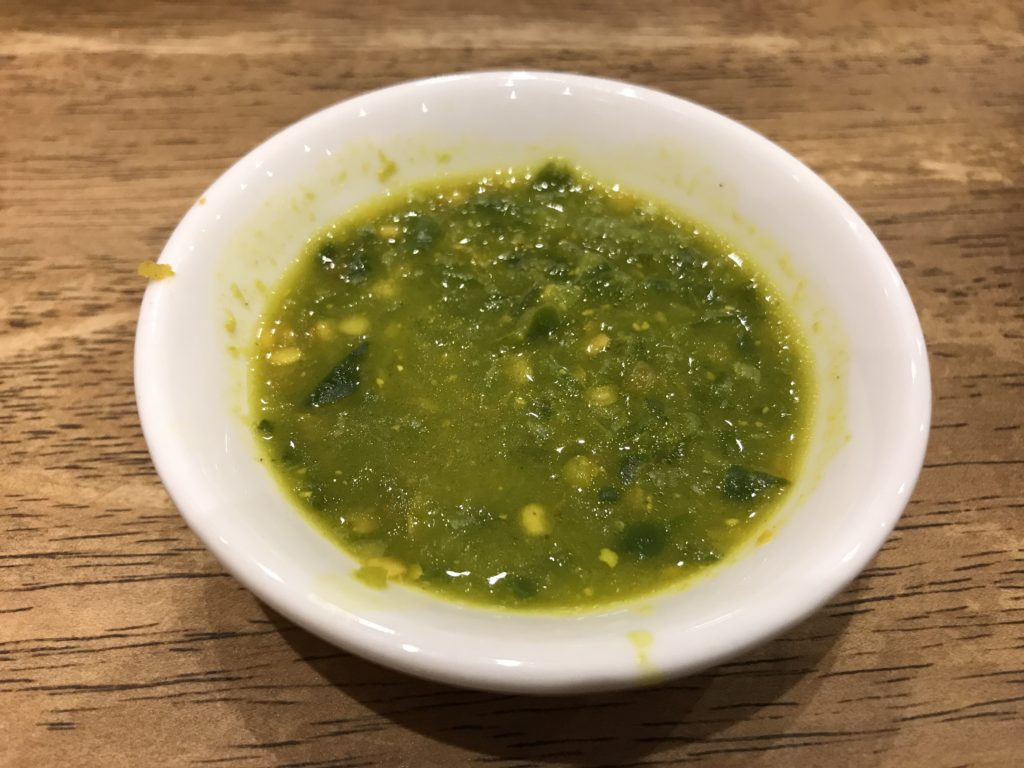 Because we left the waiter to choose the selection of starters for us, I am not sure what we actually ate: there were definitely samosas, lentil balls which had been fried, Mauritian style falafels, and some other deep fried mysteries. All were very tasty, and not at all greasy: I think the falafels were our favourite as they were crispy on the outside, and mildly spiced inside. 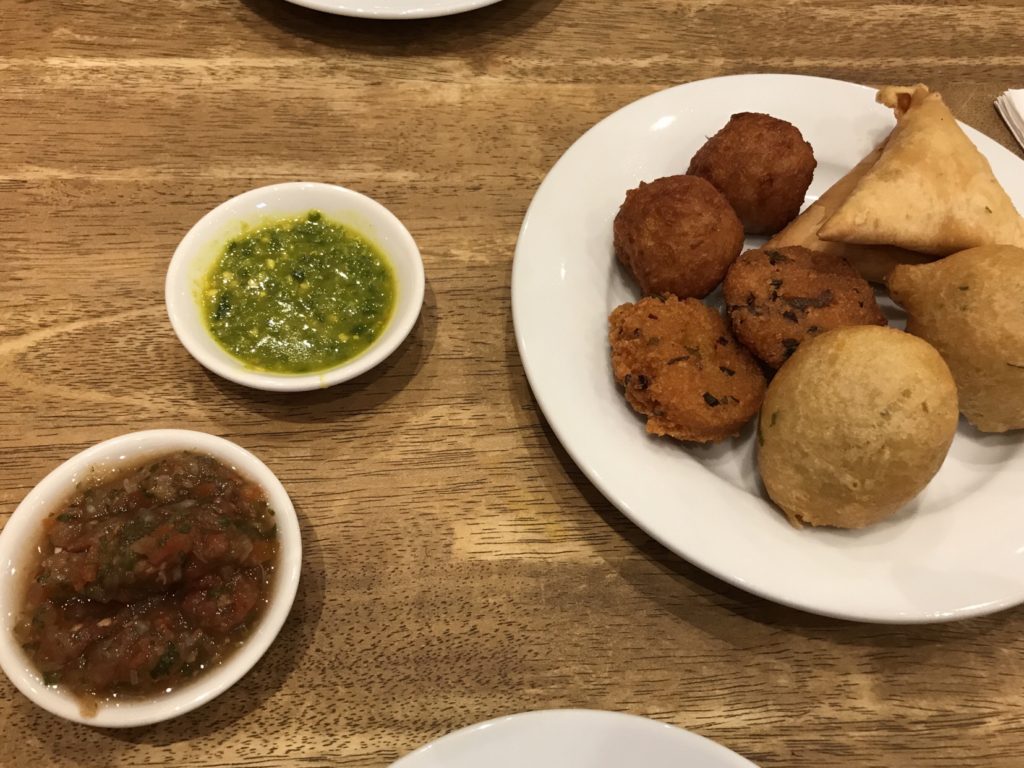 Charlotte arrived just in time to help us out with the starters, and the waiter also recommended a Mauritian classic: chou-chou, which I couldn’t resist trying. Chou-chou is apparently a Mauritian vegetable which is easy to find all across London, but as yet still unidentified by us. I’d say it’s a bit cabbage like, judging by the leaves in the broth. 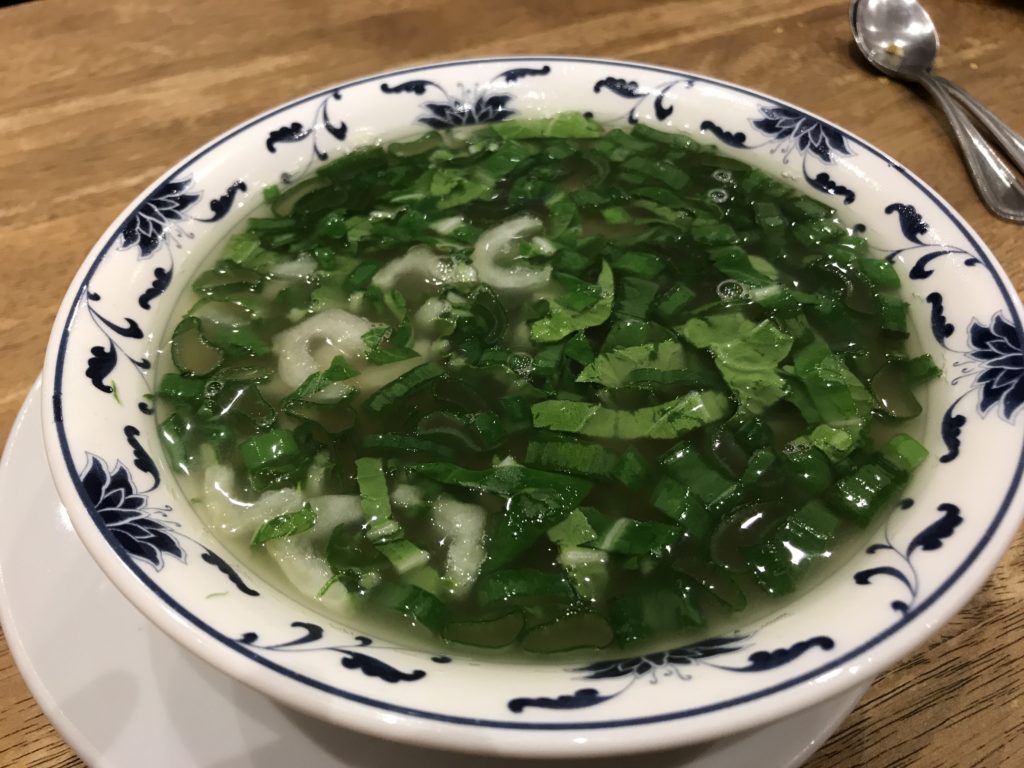 The soup itself had a slightly fishy taste, and was extremely watery, with dumplings floating in it. It certainly wasn’t unpleasant, but I am not sure I would go out of my way to order it again. 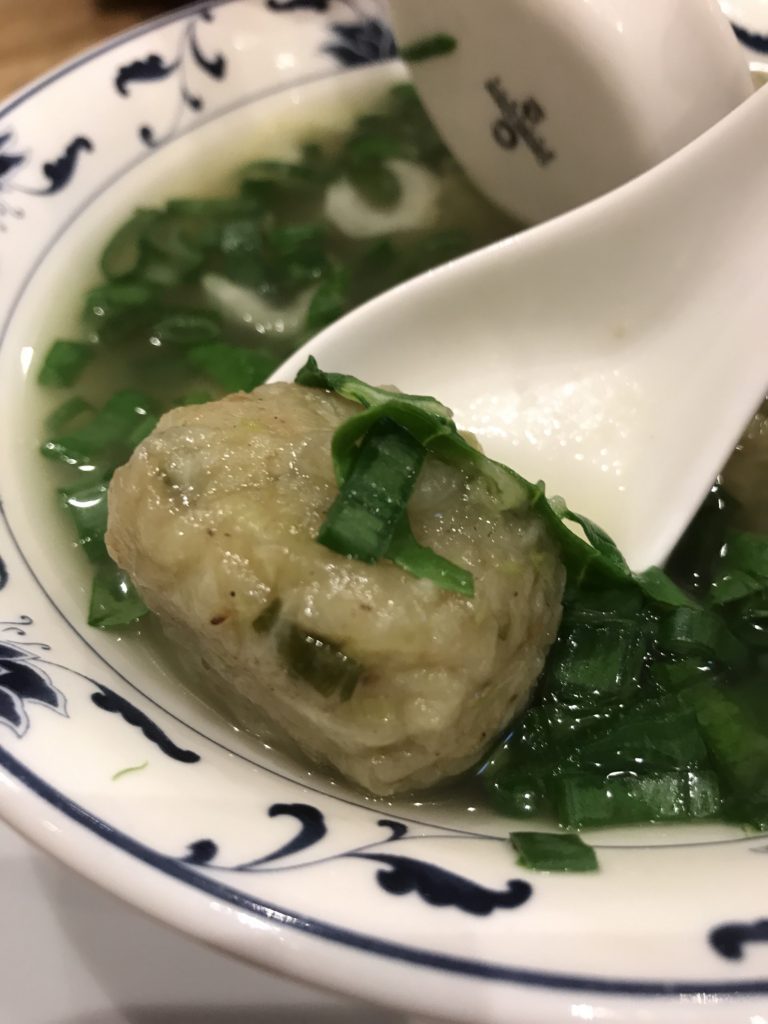 For main courses, once again we were guided by the waiter to have classic Mauritian dishes: prawn rougaille for Jo (king prawns in a rich red sauce), chicken Bol renverse for Charlotte (an ‘upside down’ dish of rice, chop suey and topped with a fried egg) and fish vindaille for me (a fish pickle cooked in mustard and onions). I will be honest with you, I wasn’t looking forward to trying mine and actually wanted the biryani, but the waiter was insistent that the vindaille was the dish to try, and I didn’t want to be rude and say no.

Jo’s prawns with rice looked lovely and the tomato sauce was very mild and tasty. The restaurant was very generous with the fluffy white rice, and she enjoyed her meal. 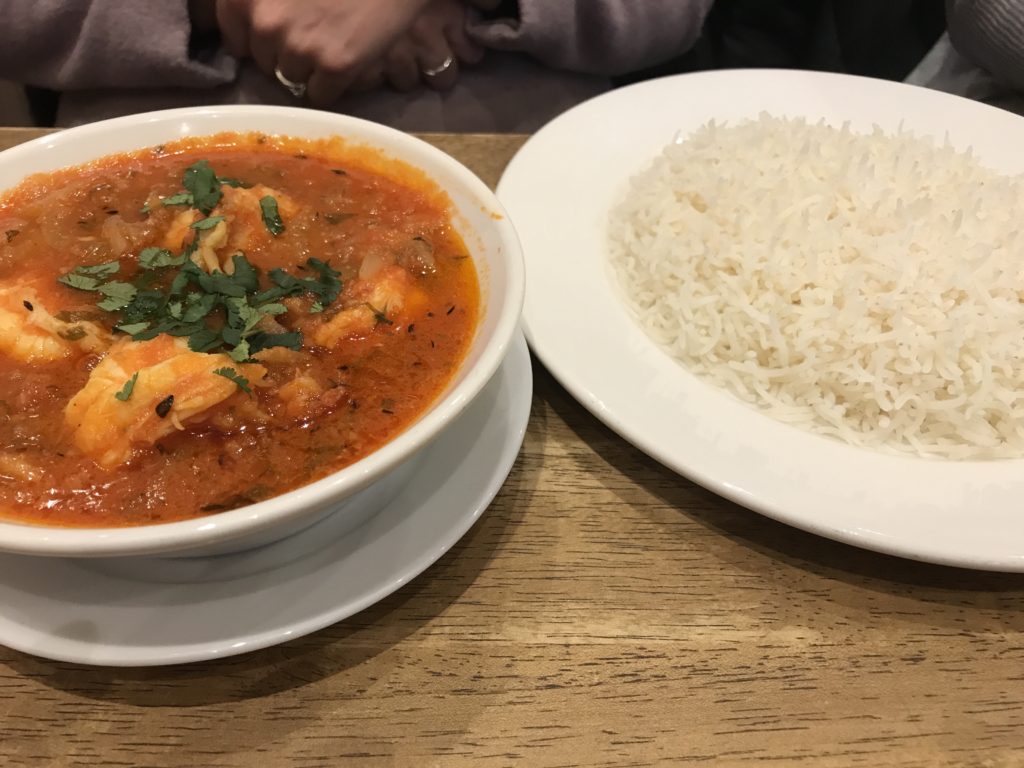 Charlotte, we all agreed, had the winning dish (although it had mushrooms in it – yuck). A great carby combination of intensely flavoured meat with noodles and rice coated in a thick sauce, finished with a fried egg (which we didn’t really expect to like but it worked well). 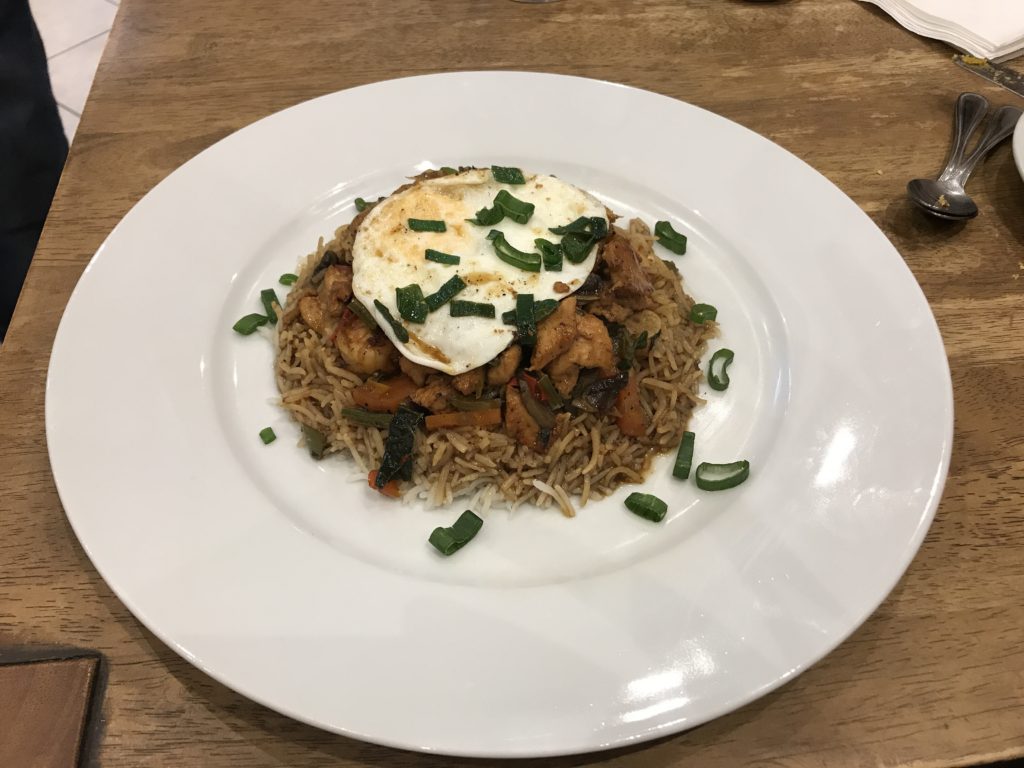 My fish was nicely cooked and the sauce was much better than I expected, but the sourness of it wasn’t really to my taste. The fish had been filleted and cut into small cubes, so it was nice to squish into a roti and into my mouth, but I found it too rich to eat too much of it. 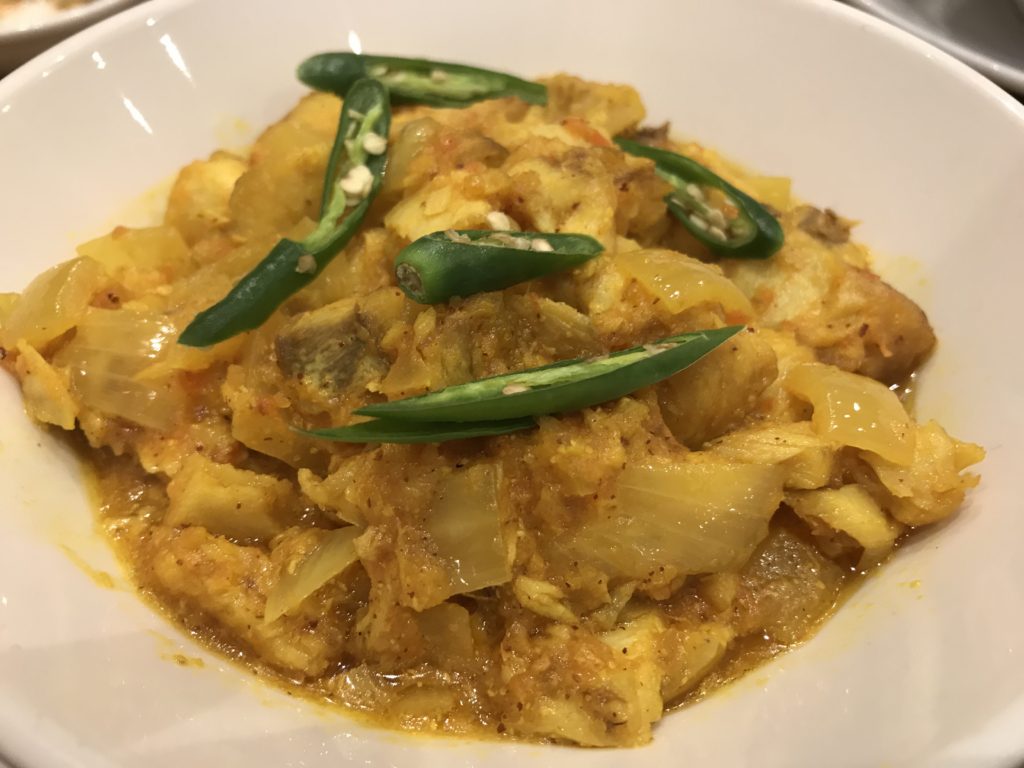 We washed down our meal with ‘Pearoni’ sparkling pear drink and vanilla tea. 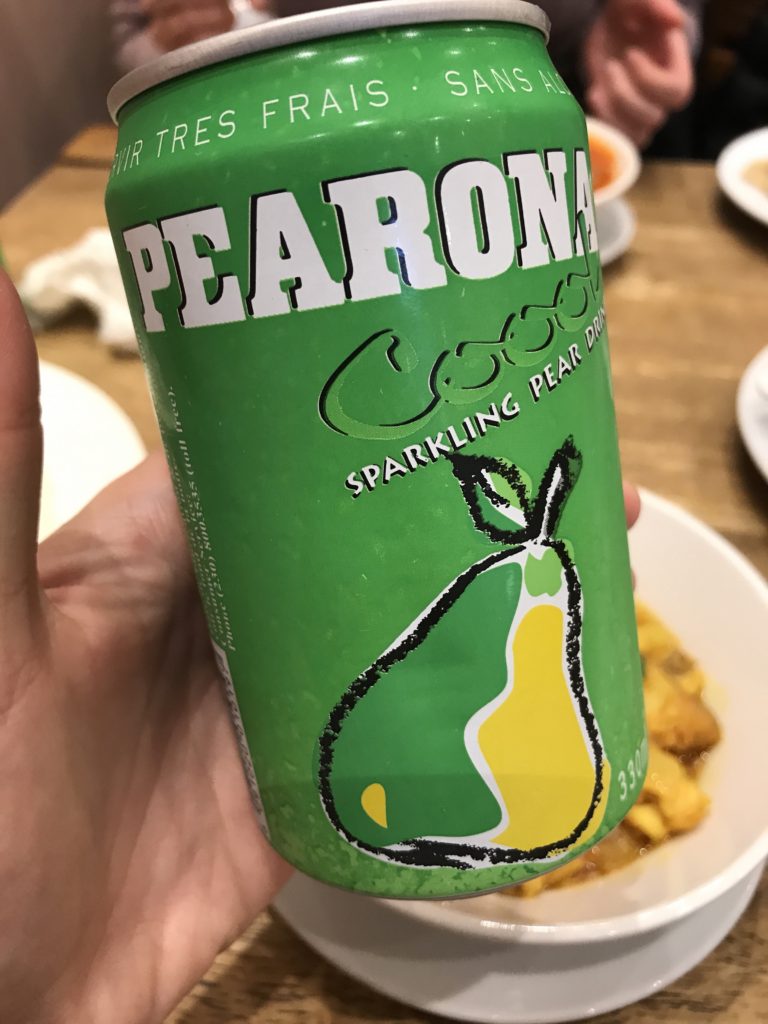 If you are near Turnpike Lane then definitely do give it a go, as the staff were so friendly and welcoming, and the food was in the main very tasty. Next time I will focus more on the street food element, and give the biriani a go.