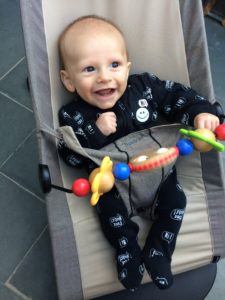 Wow, how time flies. Ioan is already twelve weeks old – nearly three months old! – and my last blog post on the subject of motherhood feels like years ago. Ioan seems to have grown so much, even though to others he still looks like a newborn.

My favourite thing about this stage of Ioan’s development is that he loves to smile, and seeing him look at me and beam absolutely melts my heart (even when he does it at 3am, although I do try and ignore it then – after a little stroke of his cheek – in the hope that he will return to sleep). 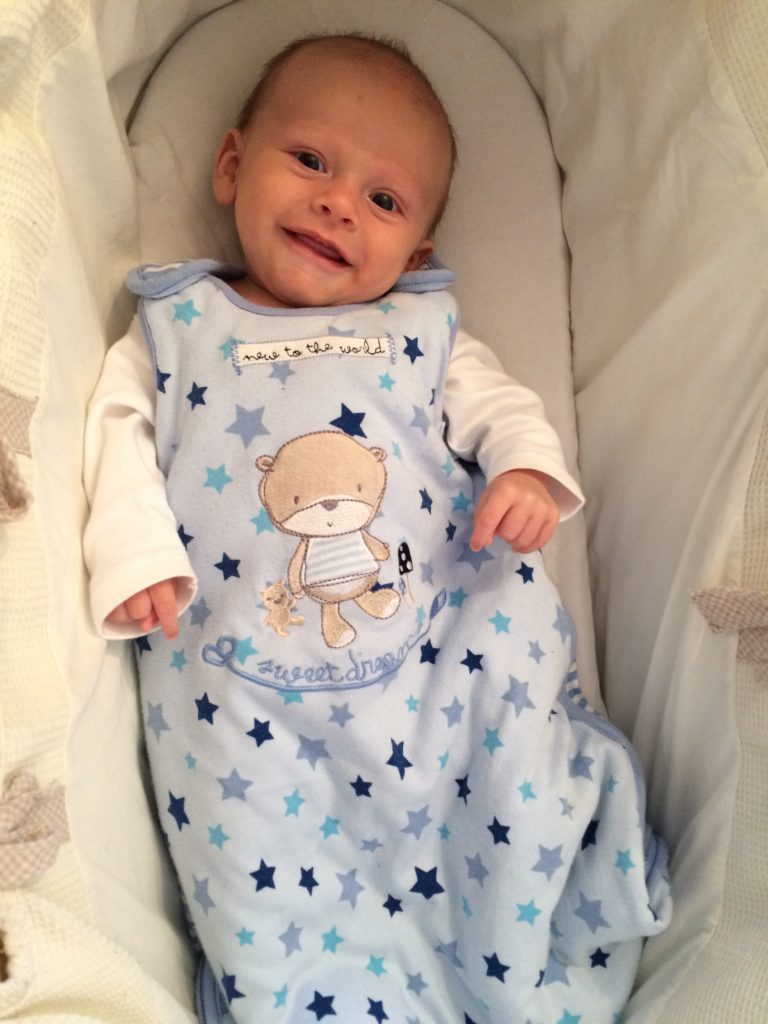 He also still enjoys a good exercise of his lungs, with the odd scream thrown in to give me a proper fright. Evenings still tend to be when he’s at his most grizzly, but now it’s more likely to be due to overtiredness rather than wind. 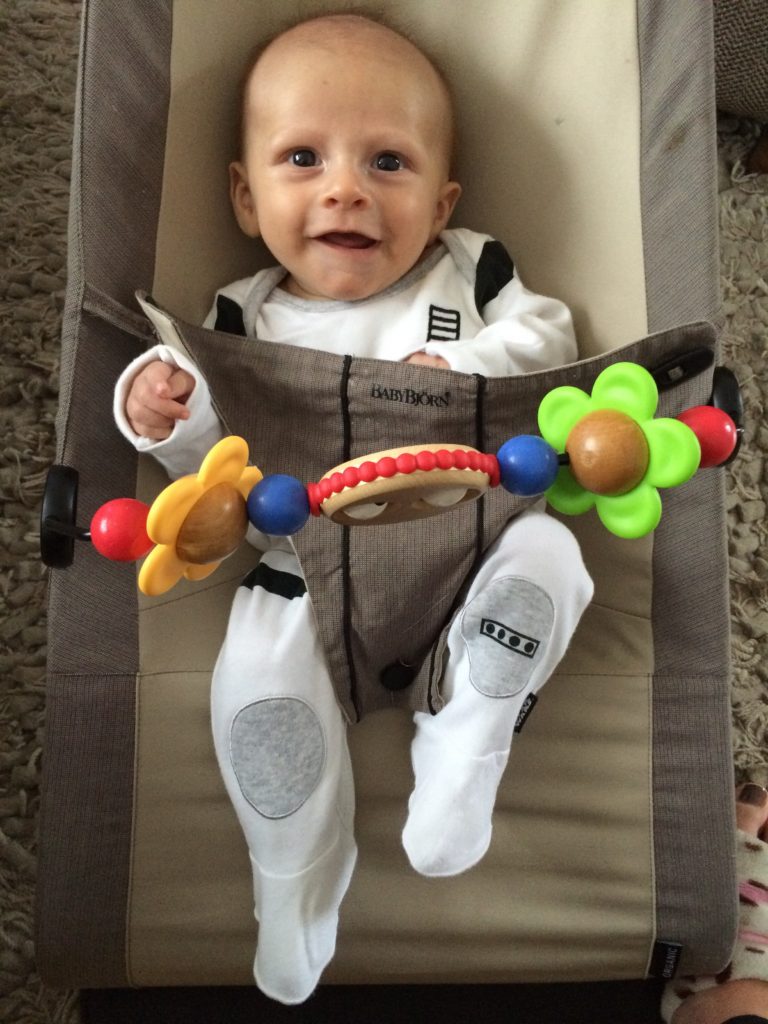 I know it shouldn’t be, but one of my favourite faces he pulls is this pout. It’s so expressive, and can signal the start of a meltdown (which is why it shouldn’t be my favourite) but if caught in time we can jolly him back out of it, and have him smiling again. 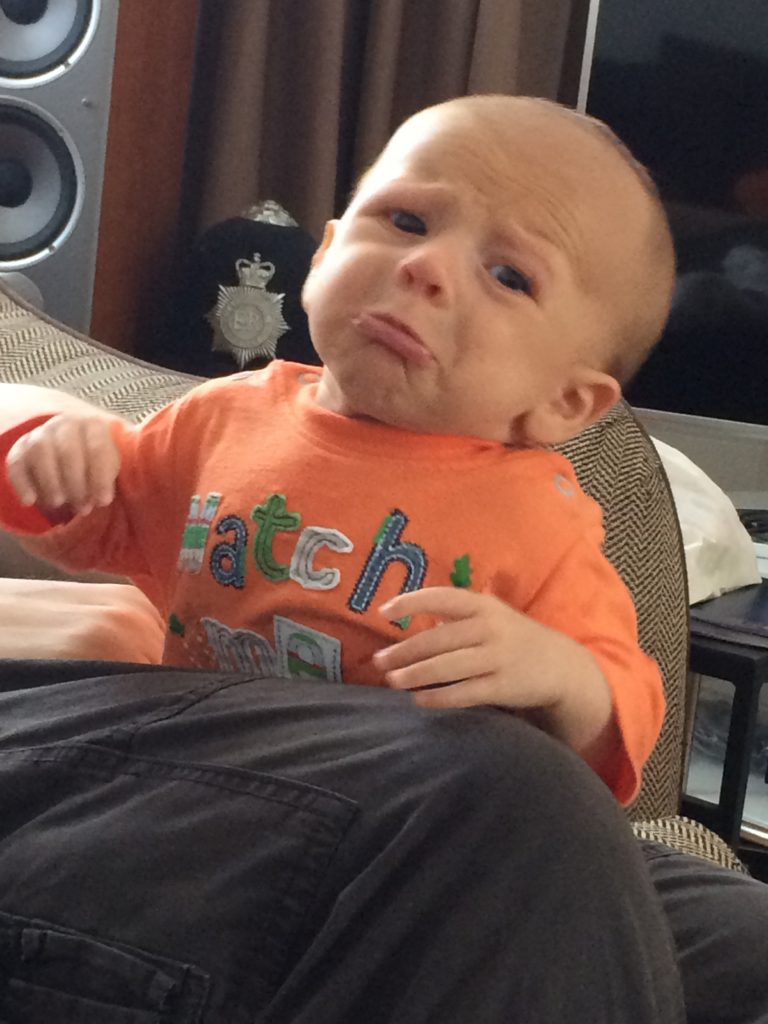 Ioan also likes ‘talking’ to us now, and gurgles his way through the day (and sometimes night) with his own brand of conversation. The first time I tried to repeat the noises back to him I felt like an idiot, but now I think nothing of chatting back to him in public. Presumably anyone with kids will understand what I am up to, but some of those without children might wonder what kind of nutcase I am.

We are getting out and about a lot more now, and have a varied schedule of activities, including Sing & Sign, where Ioan learns songs along with basic sign language. He’s not expected to actually sign himself for several months (if ever) and spends most of his time gazing adoringly at one of my friends rather than me, but it gets us out of the house.

We have also started baby massage, which Ioan has viewed with mixed emotions so far. We started with smiles: 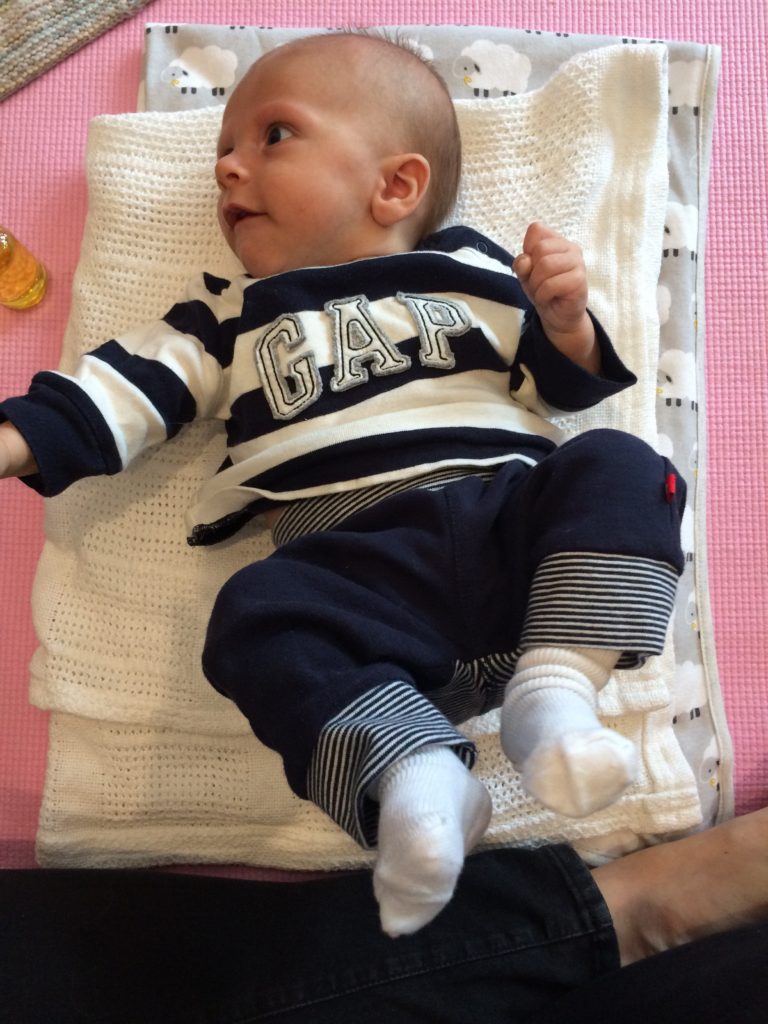 And ended with tears: 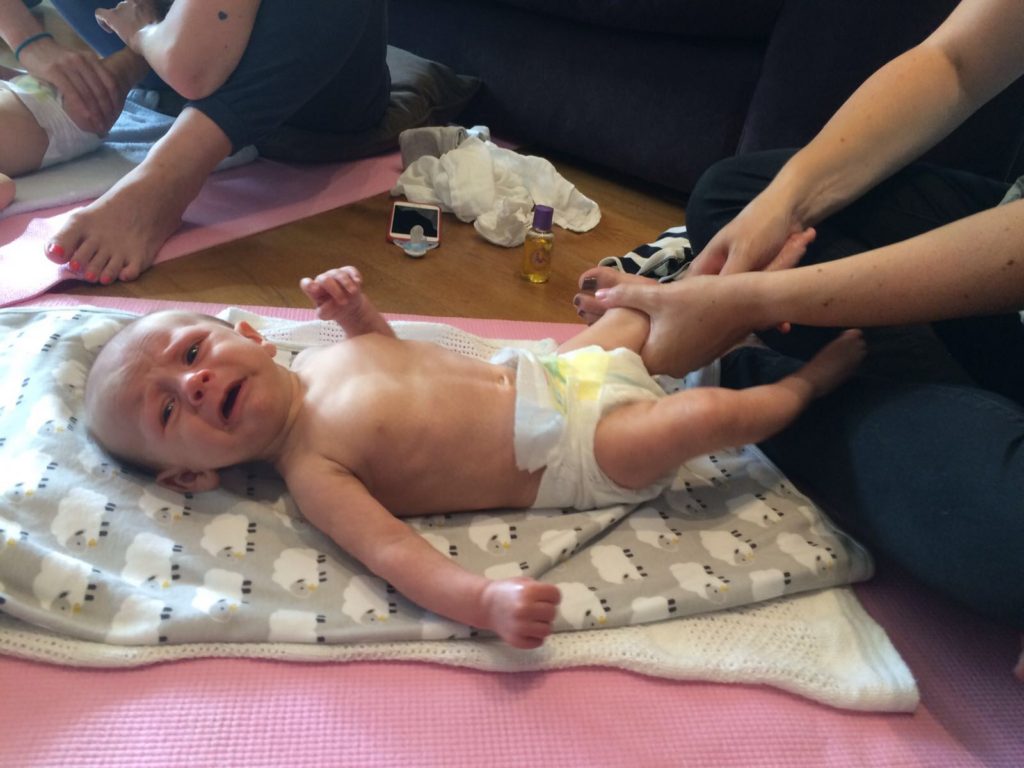 He was a bit more tranquil by week 2 though: 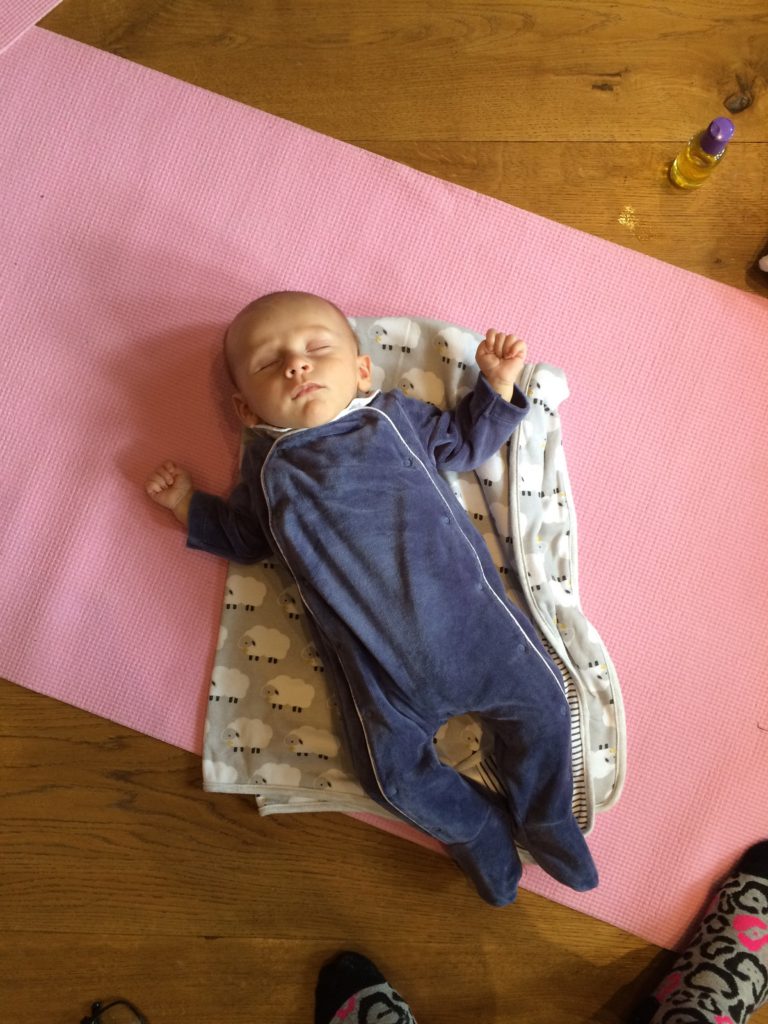 Andrew has been entertaining Ioan in his own unique way, with lullabies courtesy of Metallica and Guns & Roses. Ioan’s not completely convinced yet … 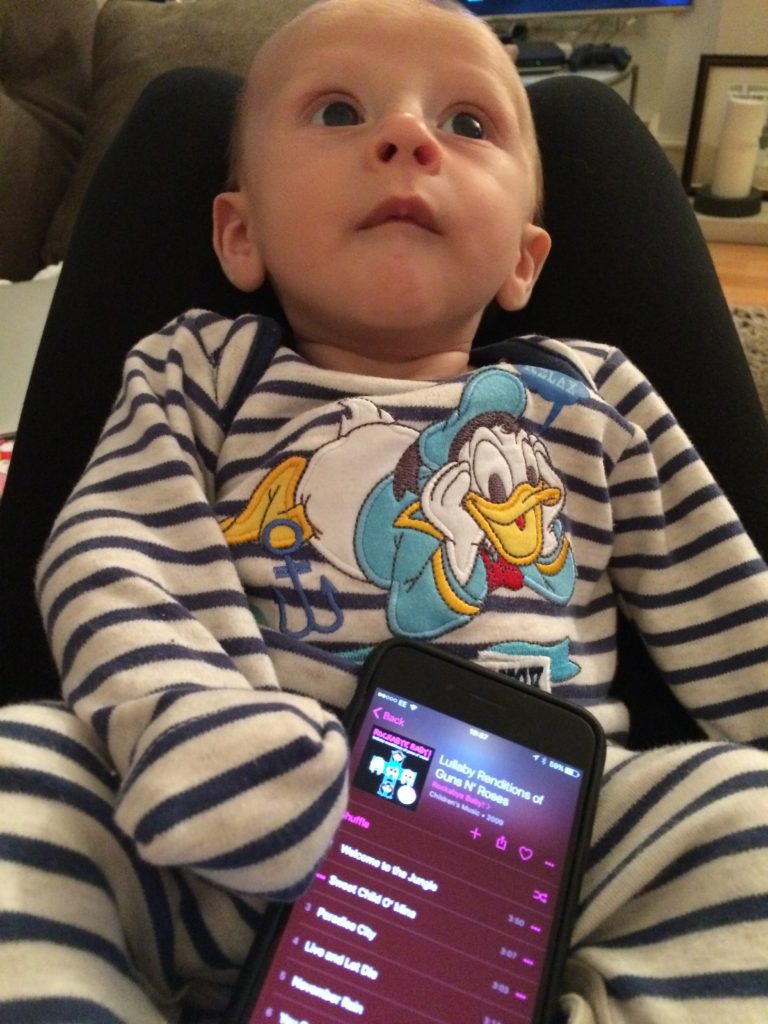 And what about me? Well, I have given up on my notions of only grabbing healthy snacks when I am rushing to deal with him and have no time to eat during the day. Crisps, sandwiches and chocolate have become my friends, but I am hoping that now he’s starting to settle into a very rough routine (napping every couple of hours), I might be able to plan my day’s diet a bit better, as I am certainly not dropping any weight.

Breastfeeding, which was so challenging for the first few weeks, has suddenly become easy. It’s great not to have to worry about bottles and formula each time we go out, and feeding Ioan is a lovely way to bond with him, except when he gets distracted and turns his head too quickly. Ouch.

Medically I think I am finally pretty much back to normal too. The biggest shock for me was how long it took me to recover from the birth: I assumed that I would bounce back after a couple of weeks, but that was most definitely not the case. A forceps delivery, significant blood loss and the emotional rollercoaster of baby blues is finally moving to memory, but I completely under-estimated the trauma of birth, and I would encourage anyone in the same situation as me, or due to have a baby, to read about ‘the fourth trimester’.

Parenthood has been an amazing journey for Andrew and me so far, and we’re loving being a little family together. I am really looking forward to seeing what the next month holds for us … 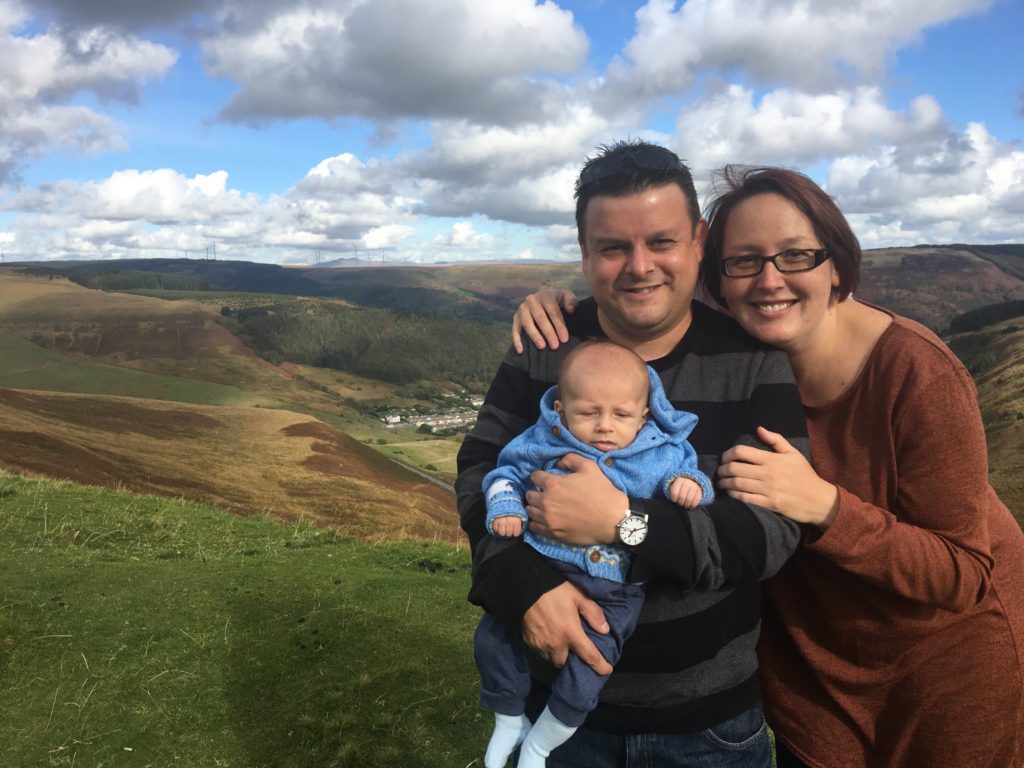 One Reply to “Thoughts on being a (greedy) mum – month 2”