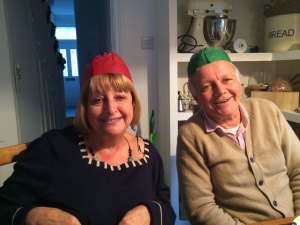 When Andrew’s parents came to visit from Wales recently, we thought it would be nice to have a pretend Christmas dinner with a three course meal, crackers and wine. I don’t like turkey at the best of times though, and so chose chicken as our meat of choice for the dinner.

What we had was a stress-free Christmas meal which could almost all be prepared in advance. None of it was traditional for Christmas, so it would also be good for a smart Sunday roast if you have people over and want to make three courses. 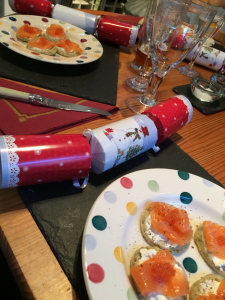 Andrew’s mum Linda loves smoked salmon, so I decided on smoked salmon as a starter for us all. I did briefly think about making some blinis myself, but the recipes I looked at online all needed yeast and proving time, and to be honest I couldn’t be bothered with the faff of making them. Waitrose do some lovely packs of blinis, either cocktail or canape sized, so I bought a pack of those, a pack of smoked salmon, a tub of cream cheese and a little jar of fish roe to posh-up the blinis.

Assembly took seconds: four blinis each, topped with a bit of cream cheese, a few strips of salmon and then a spoon of roe. I also sprinkled a bit of jif lemon on top as I didn’t have any real lemon, and a turn of black pepper from the mill over each plate. Served with a glass of Prosecco, they were a nice, light starter to begin our festive meal. 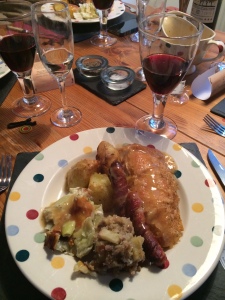 Main course – roast chicken with all the trimmings

I think everyone loves roast chicken, and between the four of us we could split it so that we each got a bit of our favourite meat: breasts for Andrew and Linda, and legs for Martin and me. I also made Isi’s Christmas stuffing to go with our meal, and no festive feast would be complete without pigs in blankets. I usually make my own with our sausages and streaky bacon from Frank Godfrey butcher (where we always buy our Christmas goose), but bought a pack of ready-made ones from Waitrose (along with the sausagemeat they were on offer for two packets for a fiver).

Roast potatoes go without saying, and I like to have plenty per person, as everyone likes roasted spuds. At Christmas I roast the potatoes in the fat from the goose, but for now I made do with olive oil, and plenty of salt and pepper.

As far as Andrew is concerned, Christmas isn’t Christmas without creamed leeks, so I made some using cream cheese instead of double cream for a lighter version (you can see the full recipe here).

Gravy made from the meat juices completed the meal, although I did also make some bread sauce (from a Colemans packet mix) as I know Martin likes it: I do too, but there’s no point in making it at Christmas just for me, as it gets wasted. 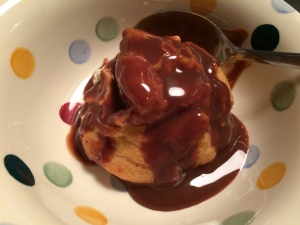 I am shocked to see that I haven’t posted a recipe for profiteroles before, so here’s what I do (my choux pastry is from Nigella’s Domestic Goddess).

Put the butter and water into a saucepan and heat until the butter is melted, but try not to let the water boil and start to evaporate. Take the pan off the heat and add the flour and salt, stirring until the paste is combined and comes away from the sides of the pan. Then add the eggs slowly, combining fully into the flour mixture. I prefer to use a wooden spoon to beat the eggs in, but you could use a whisk. You need to add the egg slowly so that it doesn’t cook and turn into scrambled eggs before it combines with the flour. 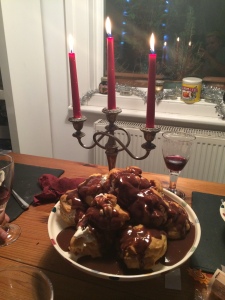 The mixture should end up silky and smooth. I then spooned plum sized balls onto a baking tray and put them in a 200 degree oven for 15 minutes until crispy and golden. As soon as you take the choux buns out of the oven, use a skewer or knife to make a little hole in the bottom of the bun to allow steam to escape – this will stop the choux going soggy as it cools. Allow them to cool on a rack.

Once cold, you can stuff these huge buns with chantilly cream, which you make by whisking 200ml double cream with the vanilla bean paste and icing sugar. I stuff the choux buns the lazy way, which is that I break them in half with my fingers and then push a spoonful of whipped cream inside. My view is that chocolate sauce will hide the mess, and who cares what a profiterole looks like if it tastes yummy! 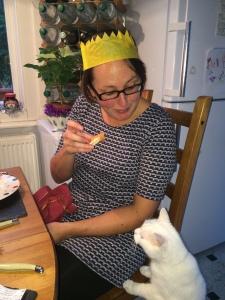 You can make the profiteroles to this stage the day before (or make the choux buns even further in advance and then freeze them without any cream inside), and then when you are ready to serve them, simply break up the 200g chocolate into 200ml cream and heat in a microwave on full power for one minute. That should be enough to melt the chocolate into the cream – whisk them together and you end up with a gloriously rich chocolate sauce. You can pour it over the profiteroles straight away, or leave it until it cools slightly and dip the profiteroles into the sauce. Delicious, and a real showstopper.

Merry pretend Christmas! As you can see from my picture to the right, Alfie was especially taken by the smoked salmon blinis, and tried to steal one from me!