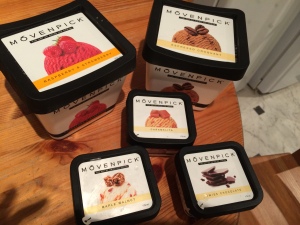 You’ll know from my recent #Nofilter post that I rather love Switzerland … and that’s in no small part due to the lovely food there. You can’t really go too far wrong at the dinner table when everything is liberally covered with melted cheese (even better – cheese which has been melted INTO WINE!). Mmmmmmmm.

So when Moevenpick, the ice cream people, asked me if I’d like to review their range of ice creams, they didn’t have to ask twice. I jumped at the chance, even though Andrew and I do tend to favour boring old vanilla over the more exotic flavours which Moevenpick also offer. I had read a couple of reviews on Ocado that their pistachio ice cream tasted like marzipan, which I hate, but I said I’d happily try any other flavours. 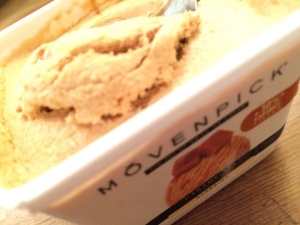 I was super impressed to have a coolbag delivered with several tubs of their ice cream, including Caramelita, Maple Walnut, Chocolate, Vanilla, Strawberry, Espresso Croquant, and Raspberry and Strawberry sorbet. I was less impressed to discover Andrew’s until now hidden passion for flavoured ice creams. I thought I’d be able to keep them all to myself, but it turned out that “I hate anything sweet” Andrew now wanted to try the caramel and maple ice creams. Er, I am pretty sure they are sweet Andrew … 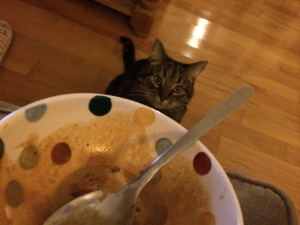 Anyway, after a quick fight we agreed to share the Caramelita and Maple Walnut flavours – I still hoped that once we opened them he wouldn’t like them, and I’d be able to eat them all to myself. So I was disappointed, and disbelieving, when he told me that he loved both of them! I can see why: the Maple Walnut ice cream came with chunks of caramelised walnut pieces and is made with real Canadian maple syrup. The Caramelita ice cream has small pieces of caramel in each spoonful, but wasn’t sickeningly sweet as you might expect. In fact the balance of flavours in both was spot on. Betty also thought so, as she licked out our bowls with great enthusiasm. 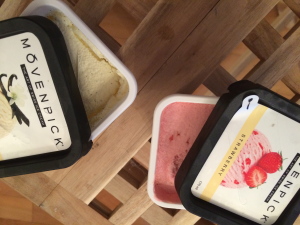 A few days later we treated ourselves to our next tasting session. Andrew tried the Strawberry ice cream whilst I opted for Chocolate (I was safe in the knowledge that Andrew wouldn’t want to try that at least). Once again we were really impressed by the quality of the ice cream. Along with the Vanilla version, each ice cream is as smooth as velvet, and the flavourings do not taste synthetic. The chocolate ice cream was rich with dark Swiss chocolate, and the Strawberry version had lumps of real fruit in it – not syrups.

Both of us also enjoyed the Raspberry and Strawberry sorbet, although if we had to choose from the Moevenpick range we’d always go for the ice cream over the sorbets – it was perfectly nice but not as special as the ice creams. 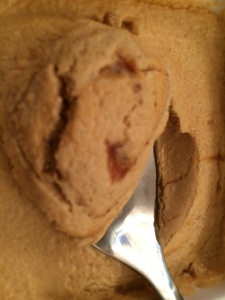 Finally I saved the Espresso Croquant tub for when my mum came to visit, as Andrew hates coffee and so there was no way he’d ever try it, even though he was now a huge fan of Moevenpick. My mum is obsessed with palmiers from Paul, the French baker, so when I saw some monster ones in the window on my way home from work one evening I picked up a couple for us to have with our ice cream.

Well, the ice cream is completely delicious – it tastes of real coffee but the flavour and texture is livened up with nuggets of caramelised hazelnuts stirred into it. Served with the palmier it was utterly perfect as a pudding for us! 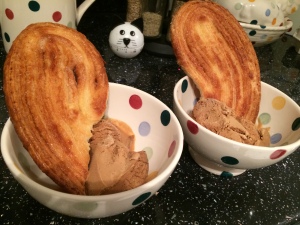 Moevenpick ice cream initially seems quite expensive – on the Ocado website a 900ml tub (the only size you can buy) is £8.49. However, that works out as 94.3p per 100mls compared to 80p for Haagen Dazs, 89.9p for Green & Black, or 99.8p for Ben & Jerrys. Personally I think Moevenpick is nicer than any of the other high end ice creams – especially in terms of quality of flavourings (such as fresh strawberries, real nuts and proper espresso) mixed into the ice cream – so it’s worth the money – I’ll definitely be buying Moevenpick as my ice cream of choice going forward, and it will probably be the Maple Walnut flavour which will most often be in my freezer.

You can find out more about their range, including food pairings and how the ice cream is made, on their website. You can buy the Moevenpick range from Ocado. If you’ve tried any of the ice cream, let me know what you think in the comments section.