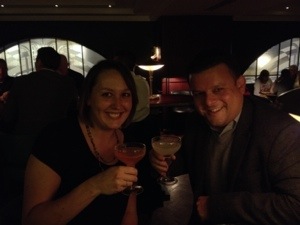 Firstly, excuse the dark photos on this post … I didn’t want to disturb fellow diners and use my flash, so consequently you can’t see much on each piccie! Secondly, I love steak.

I don’t eat a huge amount of red meat … I don’t think … I try not to anyway, as it has featured on the ‘only in moderation’ list for years, so I assume this one isn’t a usual food fad. It’s generally not cheap either, as my preference is for a thick slab of aged sirloin with some decent marbling.

Our favourite butchers are Morley in Muswell Hill and Frank Godfrey in Highbury and both have excellent beef on offer. I was upset to read this week that Jamie Oliver’s Barbecoa Butcher in St Pauls – where I have bought (very pricey) steak on a couple of occasions as it’s just down the road from the office) had a recent food hygiene scandal. Whilst I am sure they have resolved all the issues, I won’t be buying anything from them again. You really can’t be too careful with meat and I’d prefer to buy mine from somewhere which I can rely on 100%. 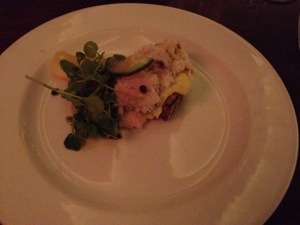 I have often found that steak ordered in a restaurant can be a bit disappointing, and so generally prefer to cook my own (especially sous vide in my fabulous toy). But I’ve been gagging to go to Hawksmoor for ages, and have only been put off by the price (to say it’s not cheap would be an understatement). So when I was feeling a bit flush a couple of months ago, I booked us into the Air Street restaurant for a Friday night steak night.

We arrived early enough to settle ourselves at the bar for a couple of cocktails. It was relaxed and informal and the drinks were very decent. It was quite a hike down two flights of stairs to the loos, so I’d advise you not to hit the drinks too hard, otherwise you’ll be spending half your time running up and down the stairs! 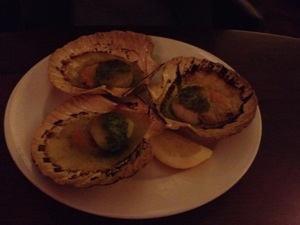 I had a very tasty crab on toast to start, although it didn’t feel like a particularly generous portion – even less so when I accidentally flicked half of it up the wall, underestimating the crunchiness of the toast! Andrew’s scallops were huge though, and drowning in a parsley and garlic sauce. Some bread would have been nice with them but none was offered.

The steaks were what we were there for though, and they didn’t disappoint, as you would expect from a restaurant with a reputation like Hawksmoor. We chose bone-in sirloin cooked medium rare, and they came to the table juicy and bloody. We had them with triple cooked chips (obviously) and spinach with lemon and garlic. Andrew also had marrowbone with his, which I am not a huge fan of. Considering anything he is supposed to eat with bones in makes him feel ill, he did well to cope with the marrowbone, which was presented baked into a halved bone! It was tasty as it had been cooked down so that it was sticky and delicious, but it is really too rich for me. 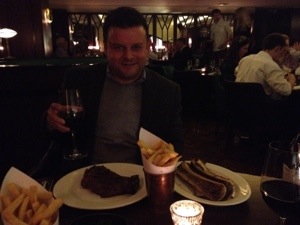 I am not sure I understand the hype about triple-cooked chips. To me they tasted like they had been hanging around under the pass for a while. I always choose bearnaise sauce with steak, and Hawksmoor’s was good, although you don’t get much on the side (for £3), so I had to dip into Andrew’s anchovy hollandaise, which was not as nice as I thought it would be.

Even though we struggled to finish the steaks as we were so full, we managed to find room for puddings (to be honest, the service was ridiculously slow at points, so we had time to digest the food in between catching the waitress’ attention). I was torn between the peanut butter shortbread and chocolate hazelnut cheesecake and eventually went for the latter on the advice of the waitress – she said it was like nutella in a cheesecake. 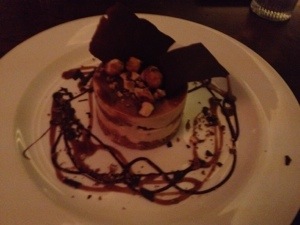 Having made nutella cheesecake (I can’t believe I haven’t posted on this! to follow asap), I have to disagree with her as the taste was very delicate – neither of chocolate or hazelnut. The cheesecake mixture was very buttery, smooth and creamy, and there were delicious little caramelised hazelnuts on top which added crunch. Unusually for me I was unable to finish it, but that’s not because it didn’t taste nice – it was just too rich after the rest of the meal.

Not including drinks or service, the meal totted up to nearly £130. Everything was good quality and well cooked (except the chips in my view), but it’s so expensive that I wouldn’t go back. I do begrudge paying a lot of money for small portions (£10.50 for my spoonful of crab), and all the extras soon add up (£28 for the steak, plus £3 for sauce, £4 for chips and … oh my goodness I only just noticed this … £5 for spinach).

The restaurant was huge, and rammed full, and for us at least the service suffered as we were ignored for long periods, tucked away in a corner. Hawksmoor is clearly very popular and as long as you can afford a blow out on steak, it’s worth giving it a go. I however will be buying steak from the local butcher and cooking it myself without breaking the bank.