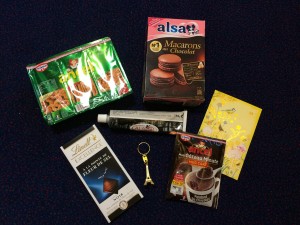 Thanks to a pretty horrendous workload at the moment, I am only just getting around to sharing my latest Foodie Penpals update. My parcel from Anne of Les Recettes du Panier (“Recipes from a wicker basket”) was awesome, so I have been desperate to post … so annoying when work gets in the way!

So anyway, as I said, I was paired up with Anne last month, and you can read about her August Foodie Penpal adventure here, as she was on time with her post (so much for the French always being late eh?!).

Anne and I actually already know eachother virtually, as a couple of years ago she ran a Christmas cookie exchange, which you can read about here. I have been following her blog since then (and quite possibly before) and am always impressed by how she not only manages to blog regularly, but do it in two languages. Scroll down for the English version on each of her blog posts – how impressive is that?

Anyway, her penpal parcel was no less impressive than her language skills, and her package to me included Alsatian goodies (as in the region of France, not the dog) which included:

Having never made macarons before (despite wanting to) I am especially pleased with Anne’s packet mix – I can’t wait to give them a go. And the mug cake mixture is being saved for a sweet-toothed emergency, which I know will come sometime! 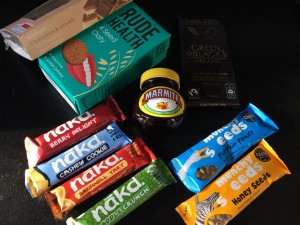 I sent my parcel to Gabriele in Lithuania this month, and I am hoping it has arrived – I haven’t heard from her yet but I know that these cross-country parcels can take a while.  Gabriele had asked me for some healthy-ish ready to eat treats, so I put together a parcel for her as follows:

As always, if you want to join in, speak to Carol-Anne at This is Rock Salt for more information.