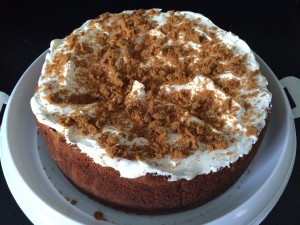 Have you ever tried speculoos biscuits? If you have ever been to a little coffee shop on the continent and been served a lightly spiced, caramel biscuit with your coffee then chances are you have tried one. Or maybe you tried to recreate my homemade speculoos biscuits? My point is, if you haven’t tried them you are missing out. They are amazing. And don’t worry, you probably can get your hands on a packet of these beauties quite easily as the Lotus biscuit brand is now available in UK supermarkets (at least I bought these from Ocado and I have seen them in Tesco before).

But why stop at biscuits when you can try biscuit spread?! Again, I first came across this when abroad: my colleague Odile recommended that I try speculoos spread and so I popped off to the local Monoprix (my favourite French shop) when I was in Paris and bought a jar. Then my other friend Charles, just back from Sweden and reading about my idea to test spreads for It’s not easy being greedy, told me I had to try the spread with bits in, and I found that in Tesco so bought a jar too. It’s amazing. Even more addictive than Nutella. 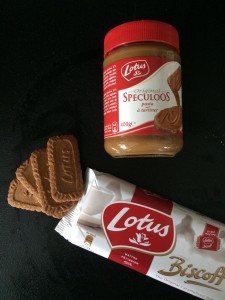 So with these two products in existence, deciding to make a speculoos cheesecake didn’t require a whole lot of thought. The only problem is that I have little experience of baking cheesecakes as I favour the unbaked variety (this Nutella one by Nigella is truly special). I didn’t think I’d ever made a baked cheesecake and then remembered several years ago baking a Nigella peanut butter cheesecake. I don’t remember it being hugely complicated, but I did struggle with self-doubt when making the speculoos one.

I based my recipe on one I found on the Lotus website (Lotus’ Biscoff brand of biscuit and spread is the one I used). However, I made a lot of tweaks to the recipe, and it’s my version I share with you below. My tweaks included: digestives mixed with biscoff biscuits for the base; a mixture of ricotta (a great tip from The Petite Cook which I always use for my cheesecakes now) and marscapone in the cheese mix; and no crushed biscuits in the cheese mix. If you try the original version though, please do let me know how you get on. 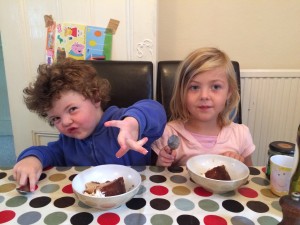 I have only made this cheesecake once (yesterday!) and I was half convinced it would be a disaster (I thought the mixture had split, then I thought I had overcooked it or undercooked it until the moment I cut it) but I think these concerns are because of my inexperience rather than the recipe. It actually turned out brilliantly: the base was crisp but with the right amount of crumbliness, and the cheese mixture was not too sweet, with a perfect baked cheesecake texture (smooth but not cake-y), and the cream topping hid the cracks across the top of the cheesecake. As you can see, it’s child-friendly too! 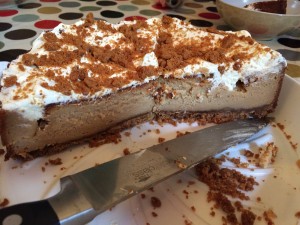 Firstly make your base by crushing the biscuits together – I prefer to crush mine in a bag with a rolling pin, as I like a biscuit rubble rather than a biscuit dust. Melt the butter in a saucepan and once it’s entirely liquid, pour your crushed biscuits in to the butter and mix well. 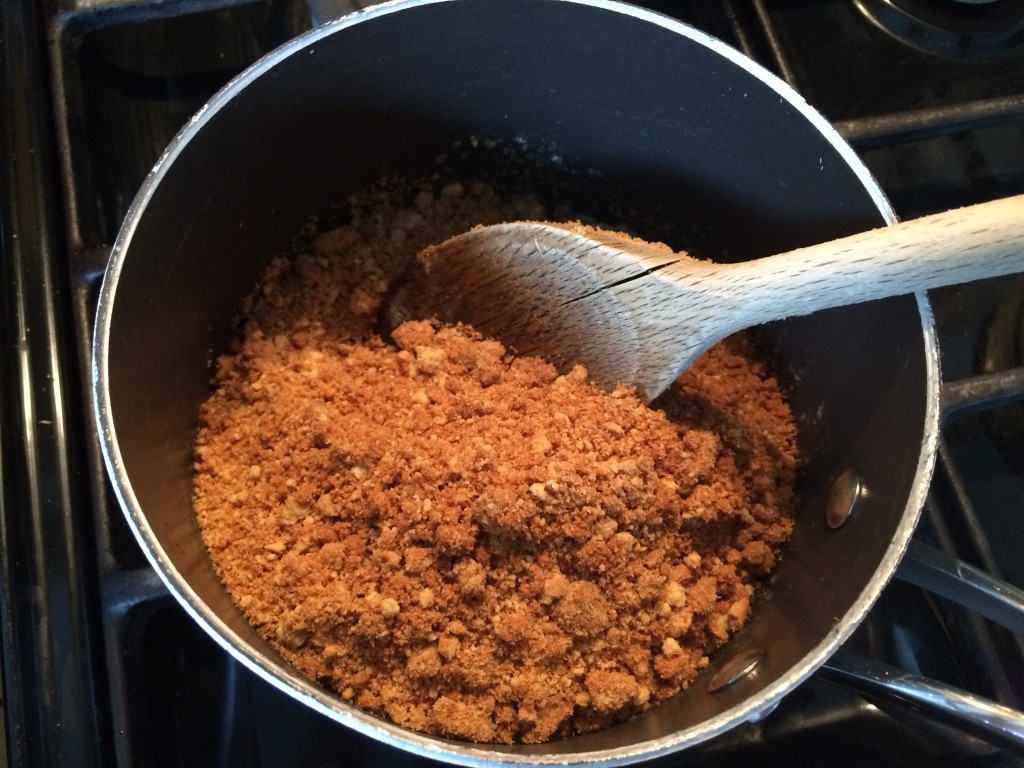 Line a springform round tin (mine was 23cm in diameter) with greaseproof paper. On the Lotus website, they recommend lining the sides of the tin with paper which is taller than the baking tin. I ignored this and trimmed the paper down, and should not have as the base does rise, so keep the paper tall people! 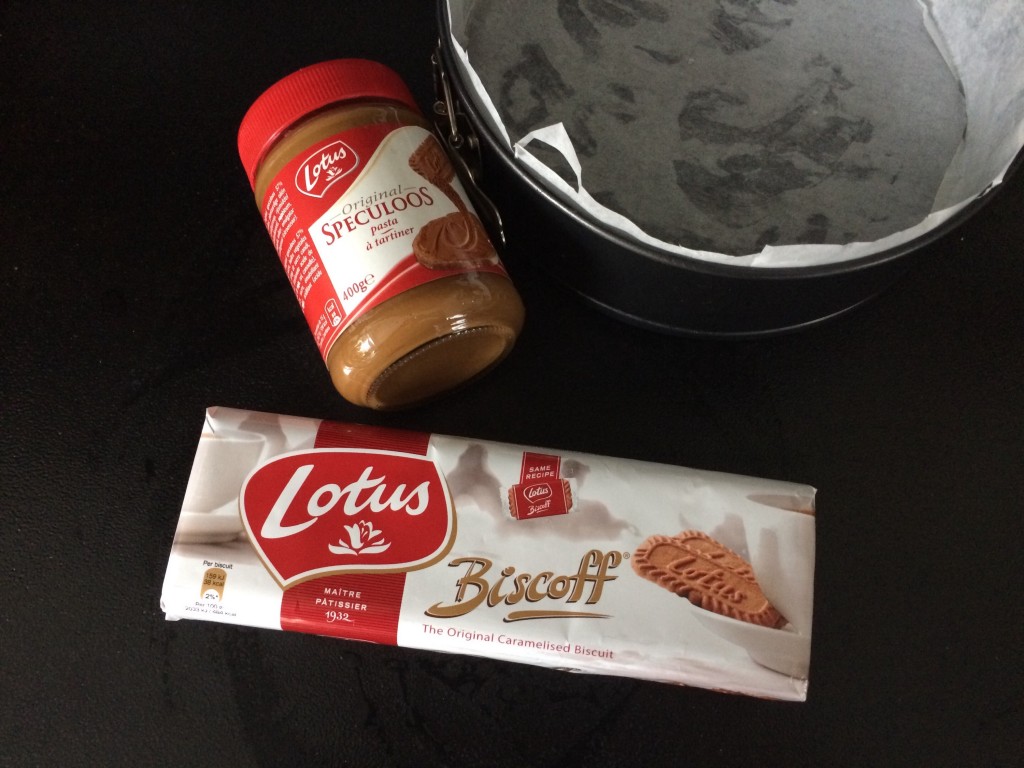 Pop your biscuit crumbs into the base of the lined tin and press them down well until the base is solid, then chill in the fridge while you make the cheese filling. Pre-heat your oven to 160 degrees. 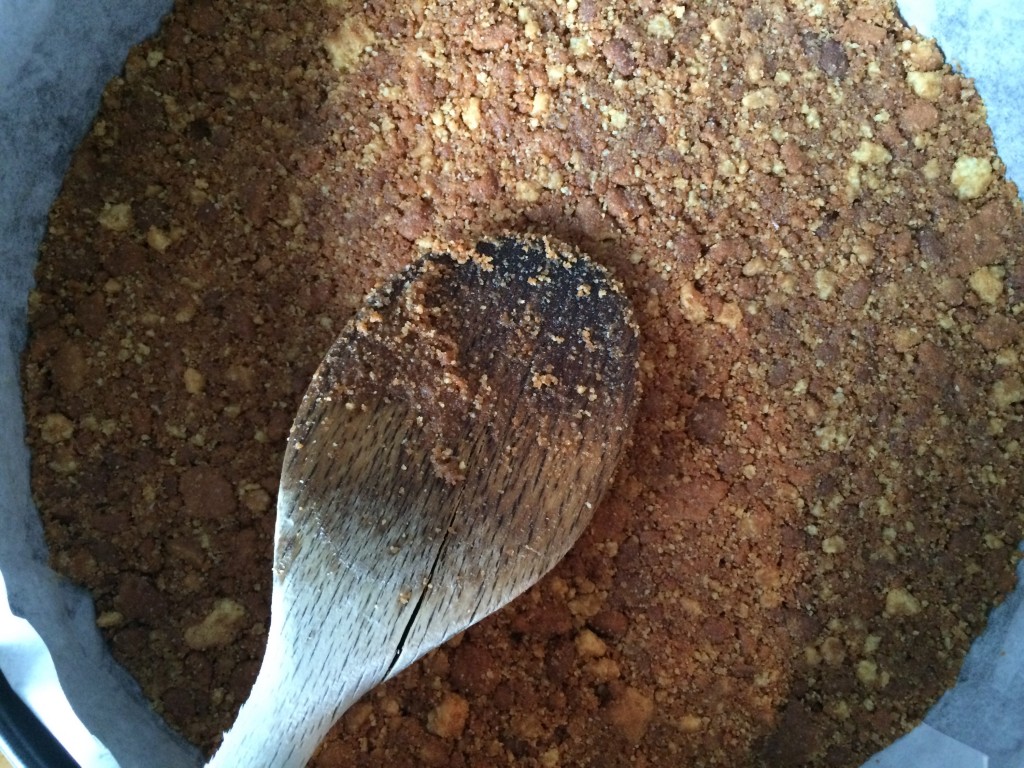 I made my filling in my freestanding KitchenAid mixer: first I whipped up the ricotta a bit (another tip from The Petite Cook to make it more similar to cream cheese), then added the creamy marscapone and mixed that in. Once combined I added the whole jar of Biscoff spread (minus a spoonful for my gob) and make sure that is fully mixed into the cheese with a couple of scrapedowns as necessary. 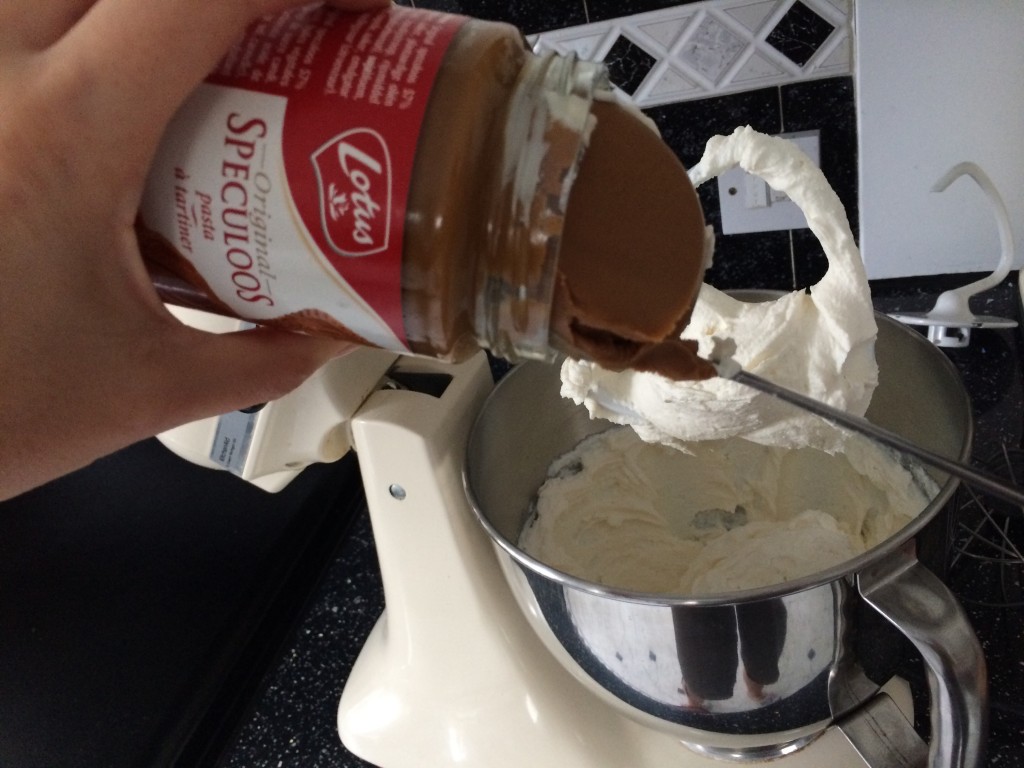 Then add the icing sugar (I was tempted to add soft brown caster sugar here but didn’t want to risk it making the baked cheesecake grainy … however I might give that a try next time to enhance the caramel flavour). 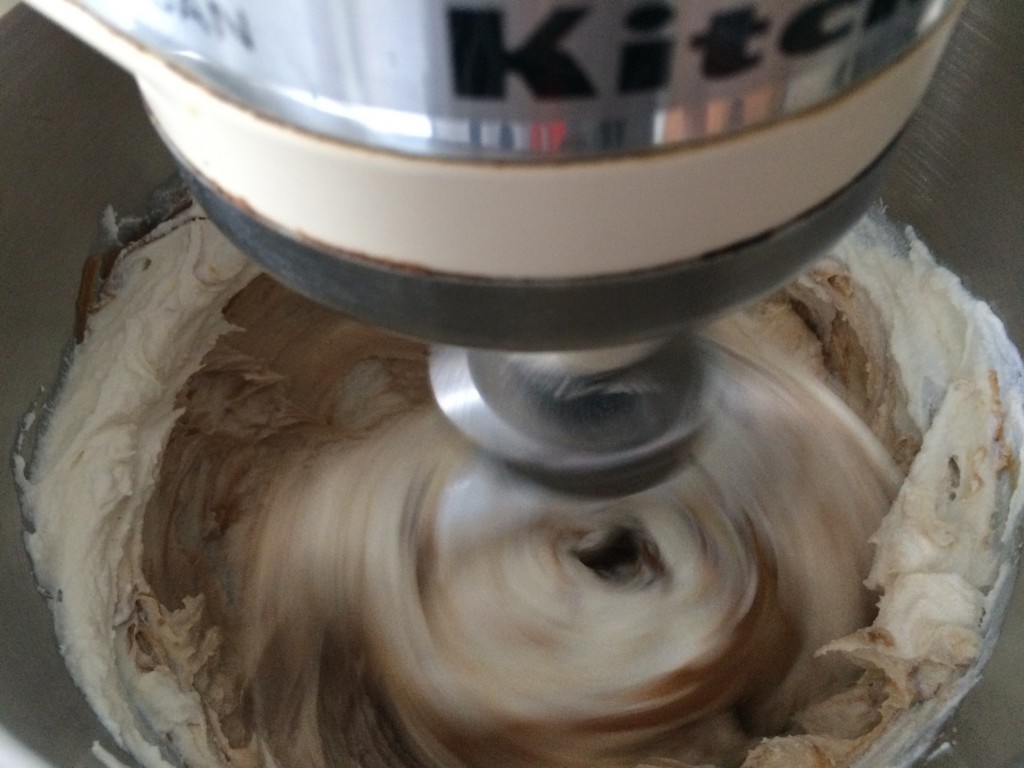 Mix, mix, mix and while mixing add the eggs one at a time (I couldn’t resist taking a piccy of my lovely yellow Clarence Court Burford Brown yolks as they mixed in). 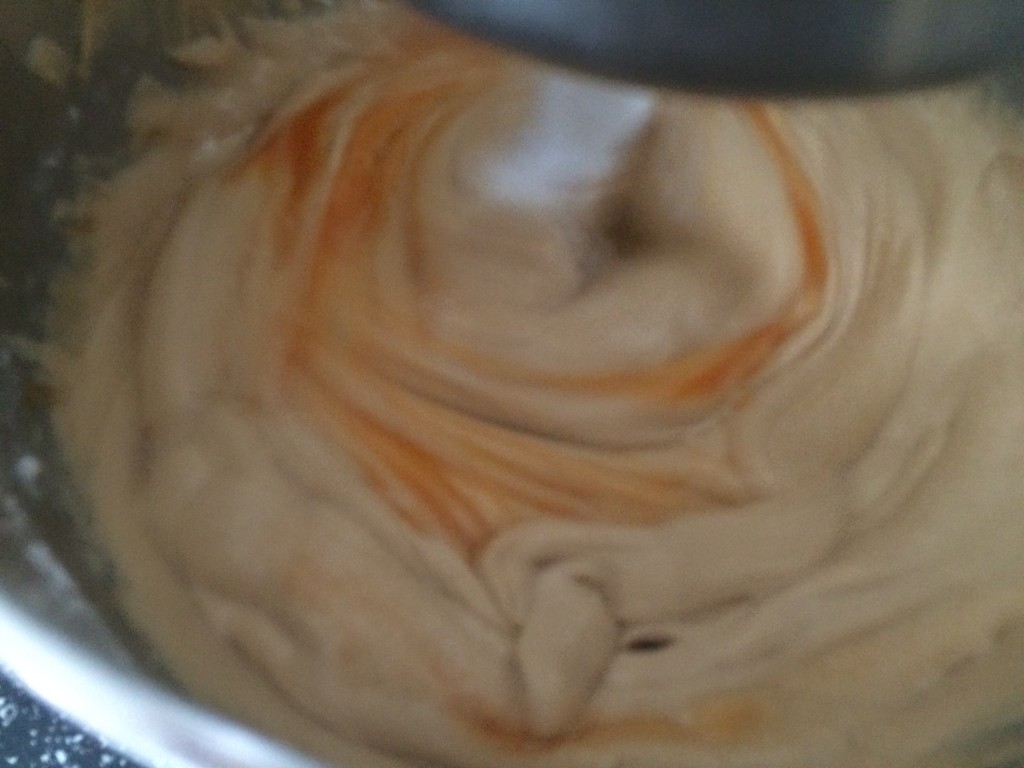 It was at this point I started to get a bit worried, as the mixture began to resemble a split sponge. You can rescue a split sponge by adding a couple of spoonfuls of flour to the mixture, but I couldn’t risk that with the cheesecake so I just added the double cream and mixed that in, hoping for the best. 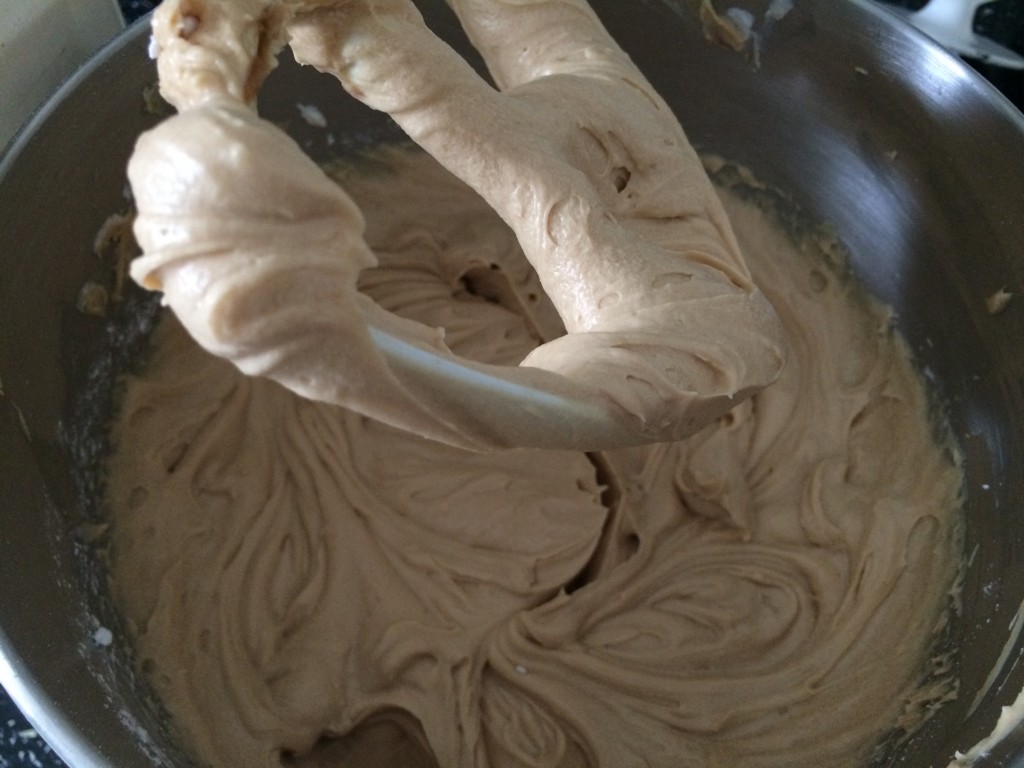 I did get a bit worried that my cheesecake mixture would be too much for the tin, but it just fit (obviously it would have fit more comfortably if I had heeded the instructions of the Lotus website and kept the lining paper nice and tall!). 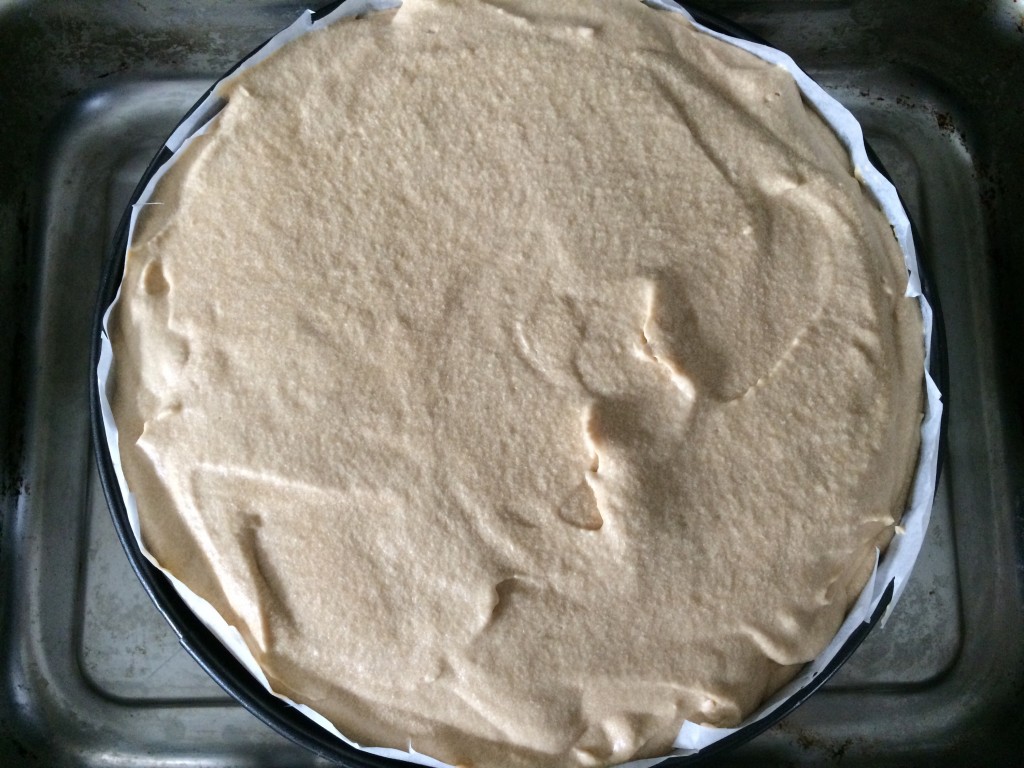 At the same time as you put the cheesecake into the oven, also put a dish of water in the bottom of the oven to help to steam the cheesecake. I did this instead of putting the tin of cheesecake in a bain marie as I was worried the water might leak into my springform tin. 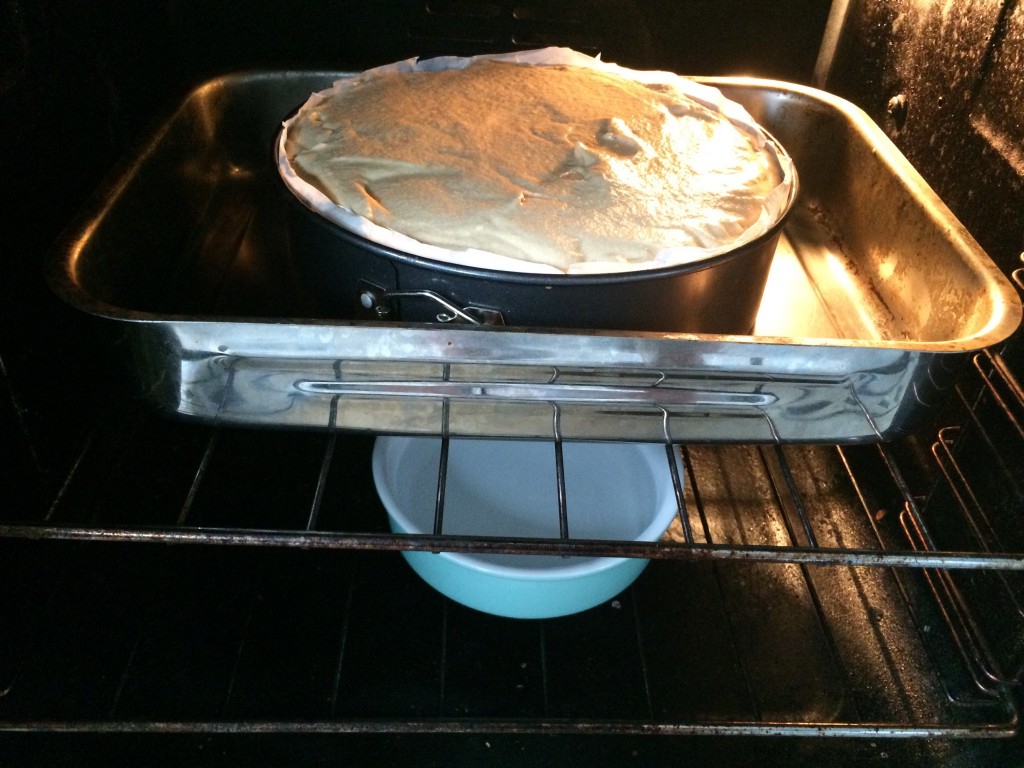 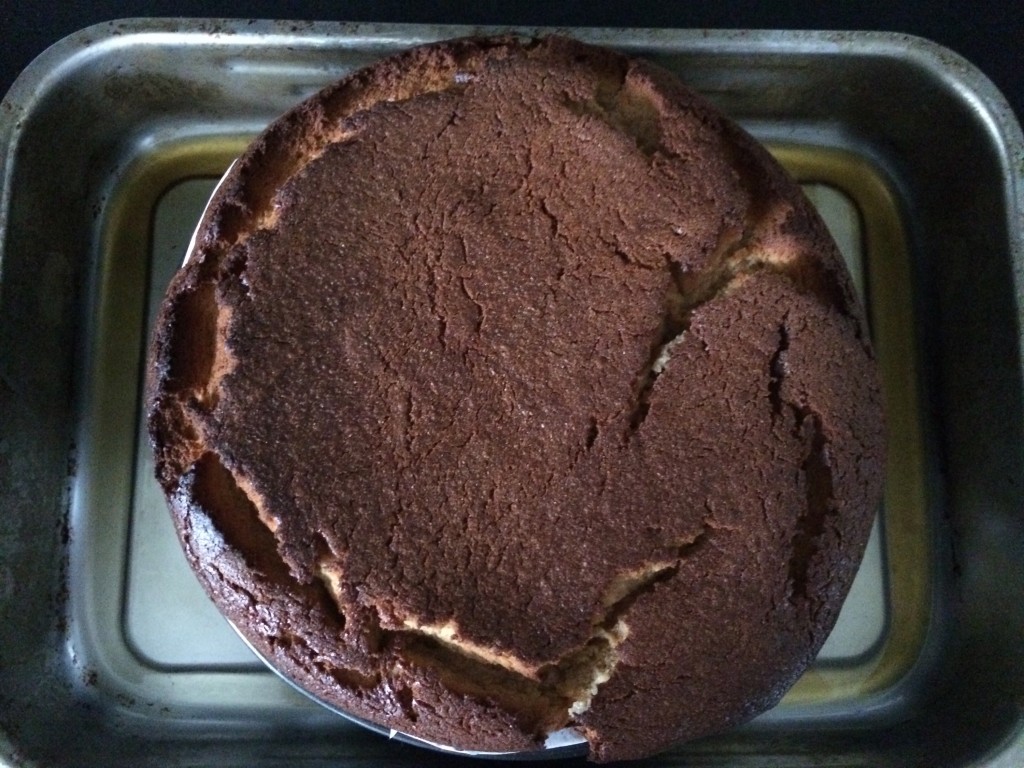 So by this point the cheesecake top was cracked to hell, and when I took it out of the oven and it started to cool it sank as well and looked pretty dreadful. 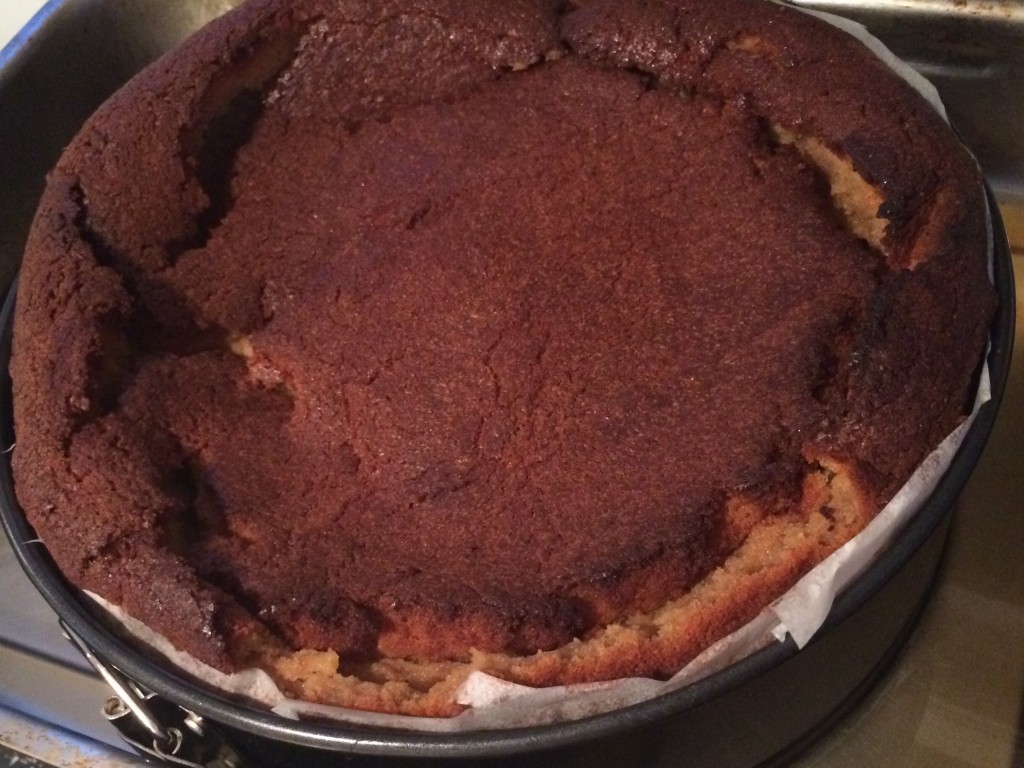 As soon as it was completely cool, I stuck the cheesecake into the fridge and left it there overnight. The next morning (only yesterday!) I took the cheesecake out and trimmed the top (check out that mess – it did at least taste nice though), and then covered it with the topping: simply made by whipping up the cream with the icing sugar until stiff – then spread that onto the top of the cheesecake … 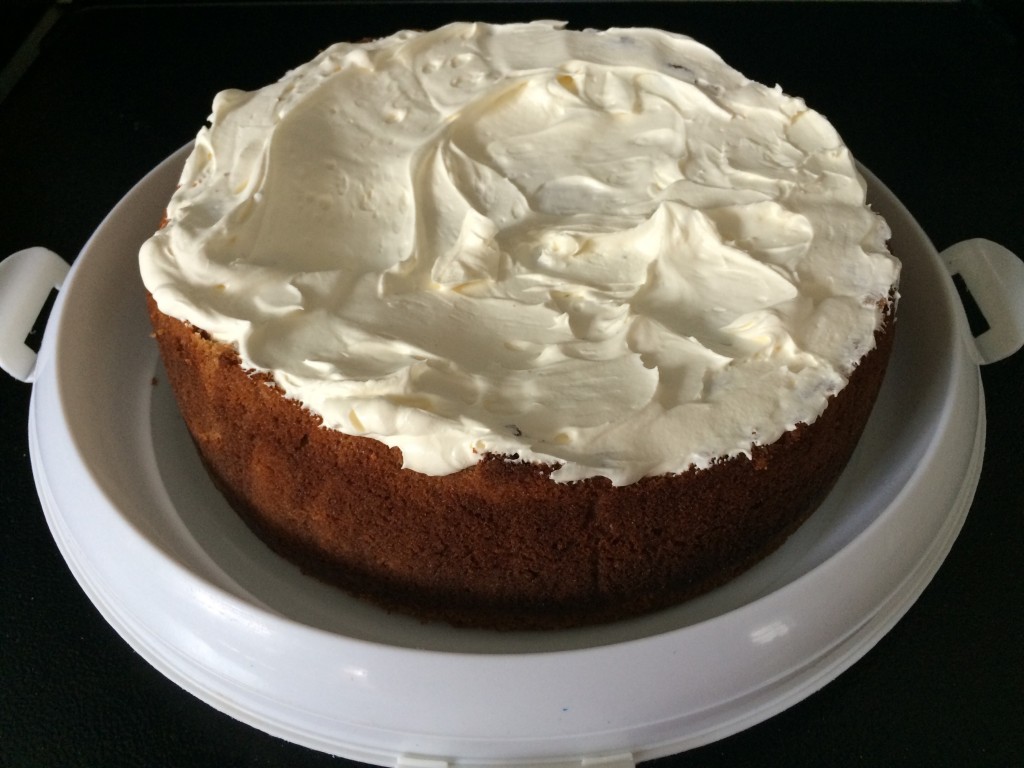 … and then crumble the biscuits on top (hey, it hides all of those mistakes): 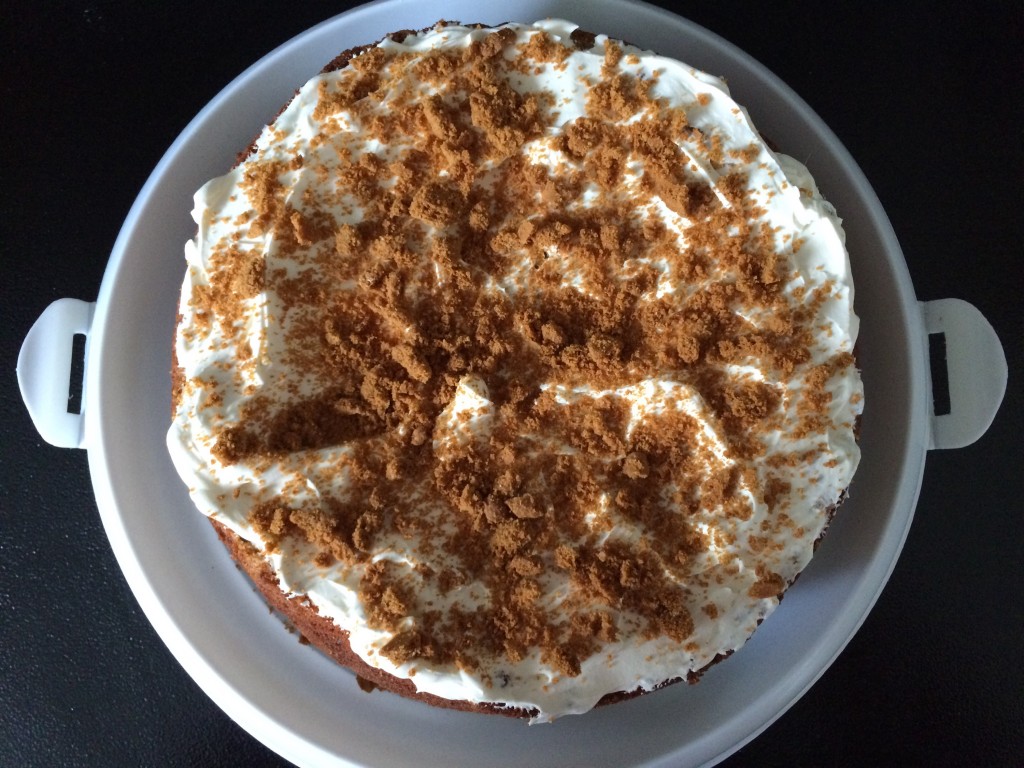 Voila, your cheesecake is done. I took ours to a friend’s house for Sunday lunch pudding and took it out of the fridge 30 minutes before serving. Eat and enjoy. 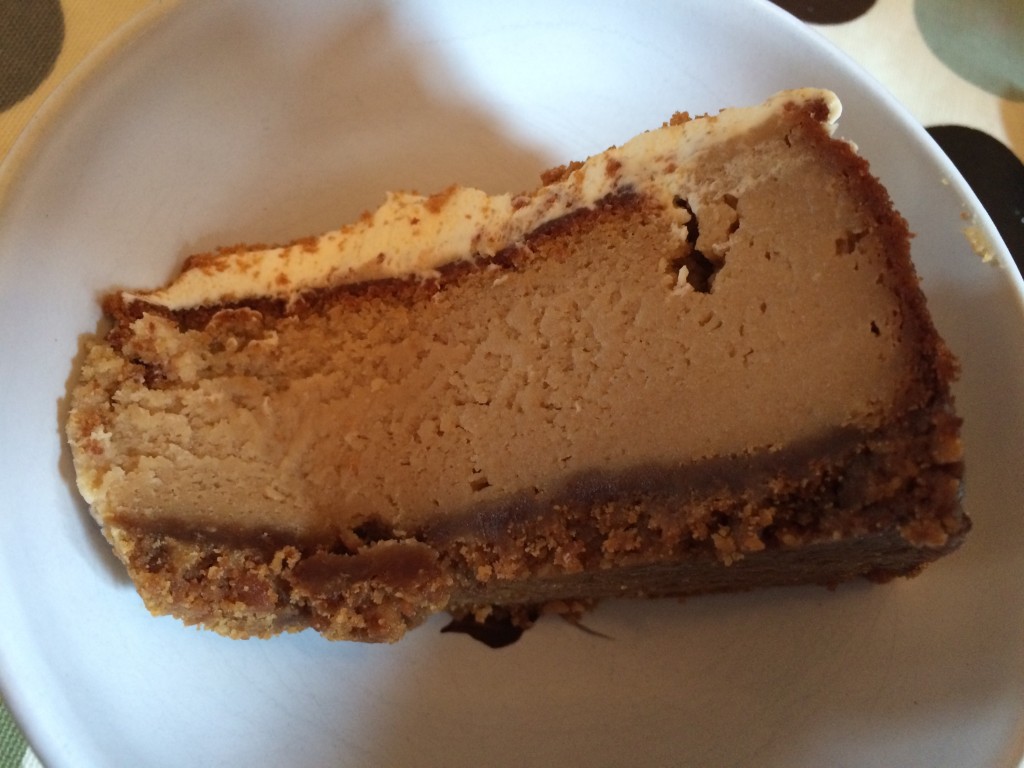 As usual, I am submitting this recipe into the following blogger challenges:

I am taking part in various challenges again, including The Great Blogger Bake off hosted by Utterly Scrummy and the Bloggers Bake Along to GBBO.