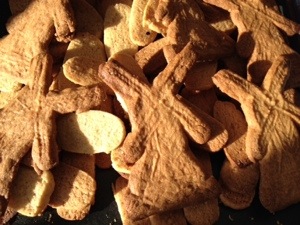 This latest blog post has been a long time coming. It is almost one year ago since I went to Brugge (more commonly known as Bruges, but the locals prefer Brugge as it is in the Flemish part of Belgium) on a long weekend break. Andrew and I had actually been there before and had a wonderful time, so when his parents suggested it to celebrate his Mum Linda’s 60th birthday, we jumped at the chance to go again. What’s not to love about a country which celebrates chocolate, beer and chips?!

So we went there and had a fabulous time. I ate my fill of waffles (the liege ones speckled with crystals of sugar), frites (fried in horse dripping if done properly, according to the rather wonderful Frites Museum), chocolate (whilst I do prefer Swiss chocolate, I won’t turn my nose up at the Belgian stuff, especially if it’s filled with hazelnut praline which is my absolute favourite type of chocolate) and drank as many varieties of Belgian beer as we could (actually it’s not easy considering most of the thousands available are above 5% proof and therefore if you are anything like me then you will be drunk by your third). I had so many wonderful food experiences which I wanted to write about, and then of course came home and life got in the way of things, and I never actually got around to writing anything I intended. 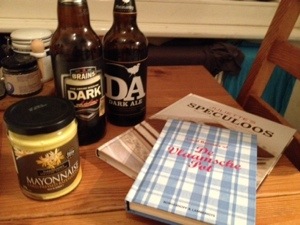 Then I saw on Nigella Lawson’s website that she was doing a Flemish beef carbonade as her cookathon and decided that I really fancied a Belgian beef stew. And if I was going to make a stew, I might as well go the whole hog and make some speculoos biscuits as well and finally write my blog on Belgium. And here we are.

Before I move onto the food though, I need to make one strong recommendation to you: if you ever go to Brugge then you must go on a Quasimodo tour. I came across this company via Tripadvisor on our first trip to Brugge – their Flanders fields battlefield daytrip tour was one of the most moving trips I have ever undertaken. The company is run by Philippe and Sharon – Philippe is the one who actually takes you out and about and his knowledge of the history of World War One and the regions impacted by the battles was fascinating. I won’t go into the full details of the tour as you can read all about it on their website, but please do go if you have the opportunity as you won’t regret it. When we went back to the city last year we did the Triple Treat tour and once again had an amazing day – with the perfect mix of history and culture, washed down by waffles, chocolates and beer! Find out more here. 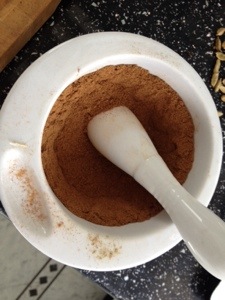 So back to the food then. We really wanted to try some traditional Flemish food whilst we were in Brugge and so Philippe from Quasimodo recommended that we try De Vlaamsche Pot in the centre of town. We managed to get a reservation in this small, family style restaurant and enjoyed some beautiful Belgian delicacies. On the way out (feeling unbelievably stuffed), I couldn’t resist buying their cookbook and it is from here that I made the Flemish Beef Stew (or “Stoofvlees op z’n Vlaams”).

Sadly I have yet to find a liege waffle recipe (so if you have one, please share it with me!) and so for a Belgian dessert I chose to make the speculoos cookie which is ubiquitous to Belgian (and in fact throughout continental Europe). Once again, I managed to find an authentic cookbook in Brugge itself, as they have an entire shop called Juliette which is dedicated to speculoos. I had also bought myself a traditional wooden speculoos mould in Brugge so had everything I needed to make my Belgian feast. 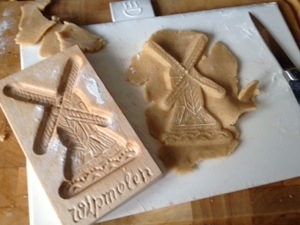 Firstly for the stew. Unlike my usual British stews this one only has onions as the vegetable constituent of the dish. No celery or carrots here – in fact the veg is replaced with brown sugar and beer – not hugely healthy but definitely very tasty! It’s extremely simple to make, especially if, like me, you choose not to sweat the onions and brown the meat before stewing it. I don’t believe this makes a huge difference and it certainly saves time not to bother. Then instead you can focus on making the speculoos dough and the frites to accompany your stew (I must be honest I made healthier potato wedges instead to accompany the stew, and I do wish I had made the effort to cook proper chips instead – I will do next time). I served mine with mayonnaise from my March foodie penpal parcel, which was delicious. 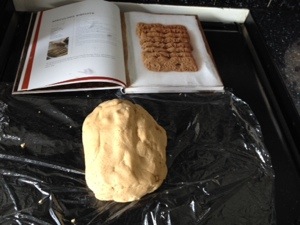 For at least the first time the speculoos are a bit time consuming to make as you need to make your spice mix first of all. To make 50g of powder (it’s not really worth making any less) you need to mix together 4g pepper (I used ground white pepper), 4g ground ginger, 8g ground cloves, 8g nutmeg (warning: it takes ages to grate 8g worth of nutmeg so if you can find a ready ground version, buy it!), 24g ground cinnamon and 2g cardamom (again, it takes ages to extract the seeds and grind your own so look for a ready-ground version if it exists!). To make around 1kg of dough (which does freeze well raw if you don’t want to make it all at once), you need 5g of speculoos powder, so this will last you a while!

The wonderful thing about the speculoos dough is that the sugar component comes from a mixture of brown and demerara sugar, the latter of which gives the dough a gorgeous crunch. I started off making windmill shaped biscuits using my mould, but got bored of that quite quickly and ended up making mainly small rectangle biscuits with the majority of my dough. I did use it all at once as Juliette said that the baked cookies last well in an airtight container. I am not sure if that’s true as I took a pile of biscuits to the office for my colleagues to share, and so they did not last long. 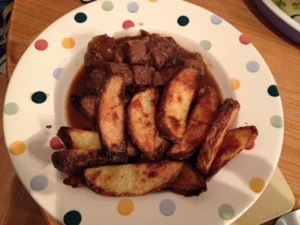 If you want to brown your onions and beef then they suggest doing so in 100g butter, but I ignored this part and just put all of the ingredients into a saucepan and cooked it for 3 hours until meltingly tender! I used a mixture of two dark ales which we happened to have around the house, and French mustard as that was what was open in the fridge. I think you can easily use whatever you do have available.

It is a sweet gravy so you need something with it to cut through that sweetness. I served mine with chips and mayonnaise, obviously. 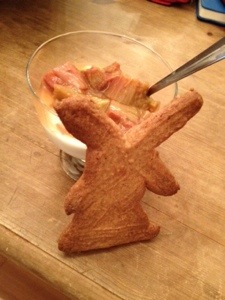 Mix the softened butter with the sugar and then beat in the egg, and then stir in the water. Add the flour, spice and baking powder and mix together into a soft dough. Juliette recommends leaving the dough to rest overnight in the fridge so that the spices correctly flavour the dough, but I just left it for a couple of hours.

Once you take the dough out of the fridge you can roll it out to a thickness of 4mm and shape into biscuits (or you can roll the dough into a rough rectangle and then slice 4mm thick biscuits from it). Bake on a non-stick tray at 180 degrees for around 14 minutes. The biscuit is cooked when you touch the centre and the biscuit springs back. They are soft until they have cooled so allow them to cool on the baking tray.

I served our biscuits with some greek yoghurt and stewed rhubarb.