It’s been a few weeks I last blogged – I lost my mojo a bit for a variety of reasons, including that it felt quite flippant for me to write about food whilst the news focused on the horrors in Ukraine and the impact of energy price increases in the UK. Then I came down with Covid, and didn’t really feel much like sitting in front of a laptop. Although the news is still horribly depressing, I am feeling on the mend, and so here I am again. 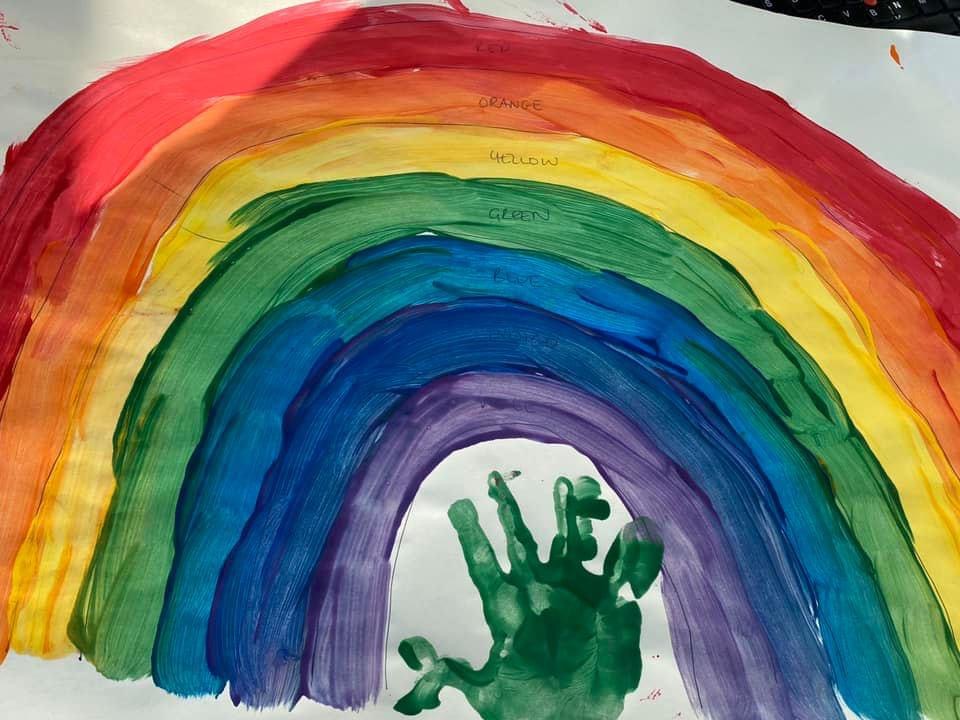 I am still haunted by the footage on the news of a father clutching his child’s toy car as he waves his family farewell, not knowing if they will ever be reunited. His wife and child were trying to leave Ukraine, while he stayed to fight for his country. Here are some resources for people who want to support Ukrainians.

The cost of living crisis

It’s always been shocking to me that in a first world country like the UK we still have people who are forced to rely on food banks to be able to feed themselves and their families. And now people are having to decide whether to feed themselves or heat their homes, because they cannot afford to do both, thanks to increasing food prices, the doubling of energy bills, and a lack of government intervention for those who need it most. Martin Lewis from Money Saving Expert has always offered helpful advice for those who need to budget, and his 90 ways to survive the cost of living crisis will be a lifeline to many people.

For recipes which have been costed to the penny, Jack Monroe has a huge selection of resources.

To be honest I can’t believe I avoided Covid for so long, but a few weeks ago (after a few days back in the office, and a night out with colleagues) I woke up on a Sunday morning with a blocked ear, sore throat, and aching limbs. I tested negative until the Tuesday, and immediately started avoiding Andrew and Ioan as much as possible (it worked, they didn’t catch it off me). 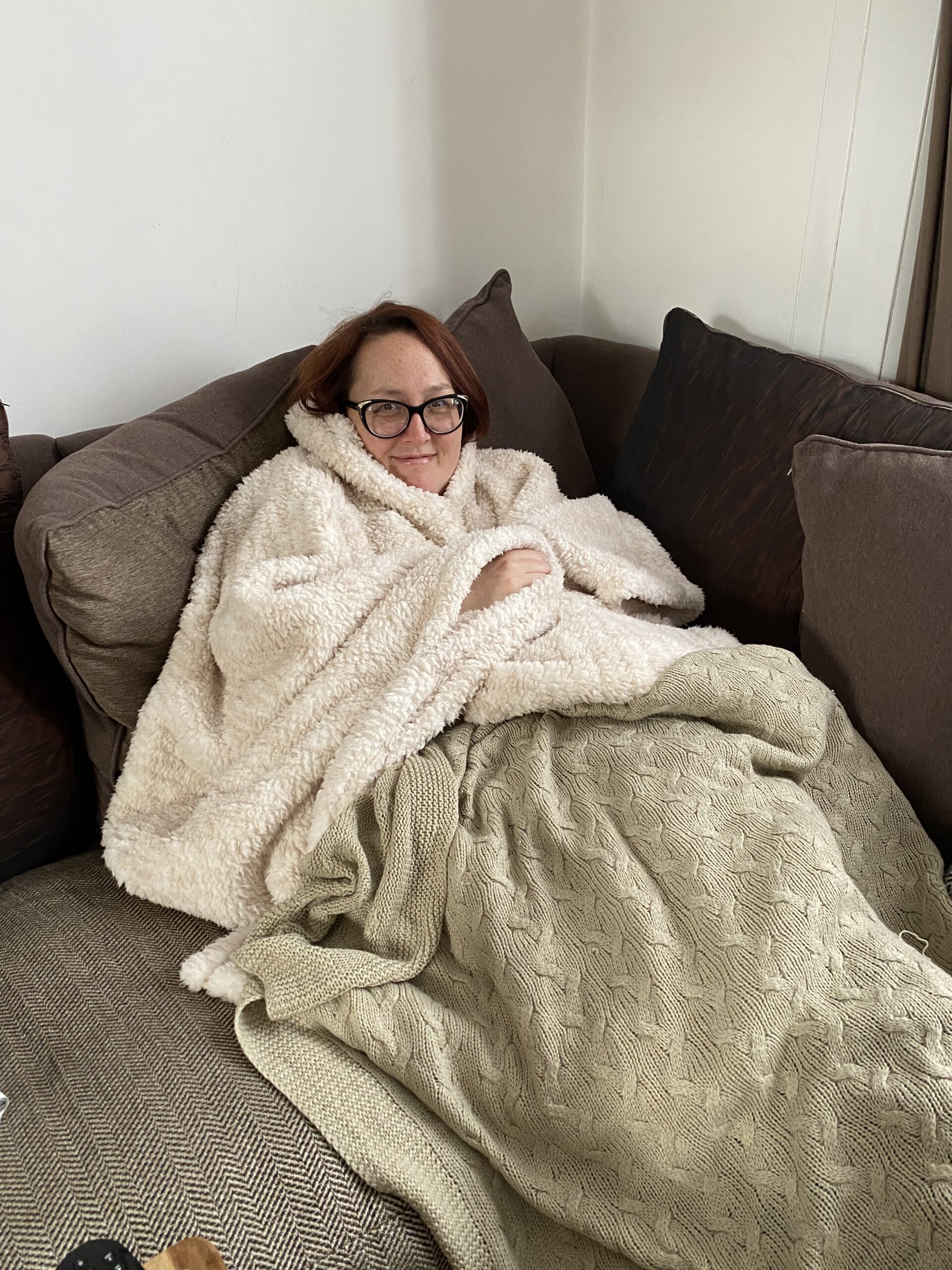 My main symptoms were utter fatigue (I could barely stay awake later than 8pm each night) and a very achy body, like I had worked out at the gym the day before (when I definitely had not!). It has been a month since that first positive test, and I still feel the occasional tickle in my throat which provokes a coughing fit, and could happily go to bed at 9pm every night, although it’s getting easier to force myself to stay awake later nowadays.

I am very thankful to be vaccinated and boosted, and that I suffered covid relatively mildly (and that I didn’t pass it on to anyone else).

It’s Easter school holidays here in London, and so Ioan has been spending the first half of his break with my mum at her static caravan in Sussex. We’ve been working hard, so haven’t really felt the benefit of being child free until this weekend, although I did manage to squeeze in a nice glass of wine whilst Biscuit relaxed on my lap the other night. 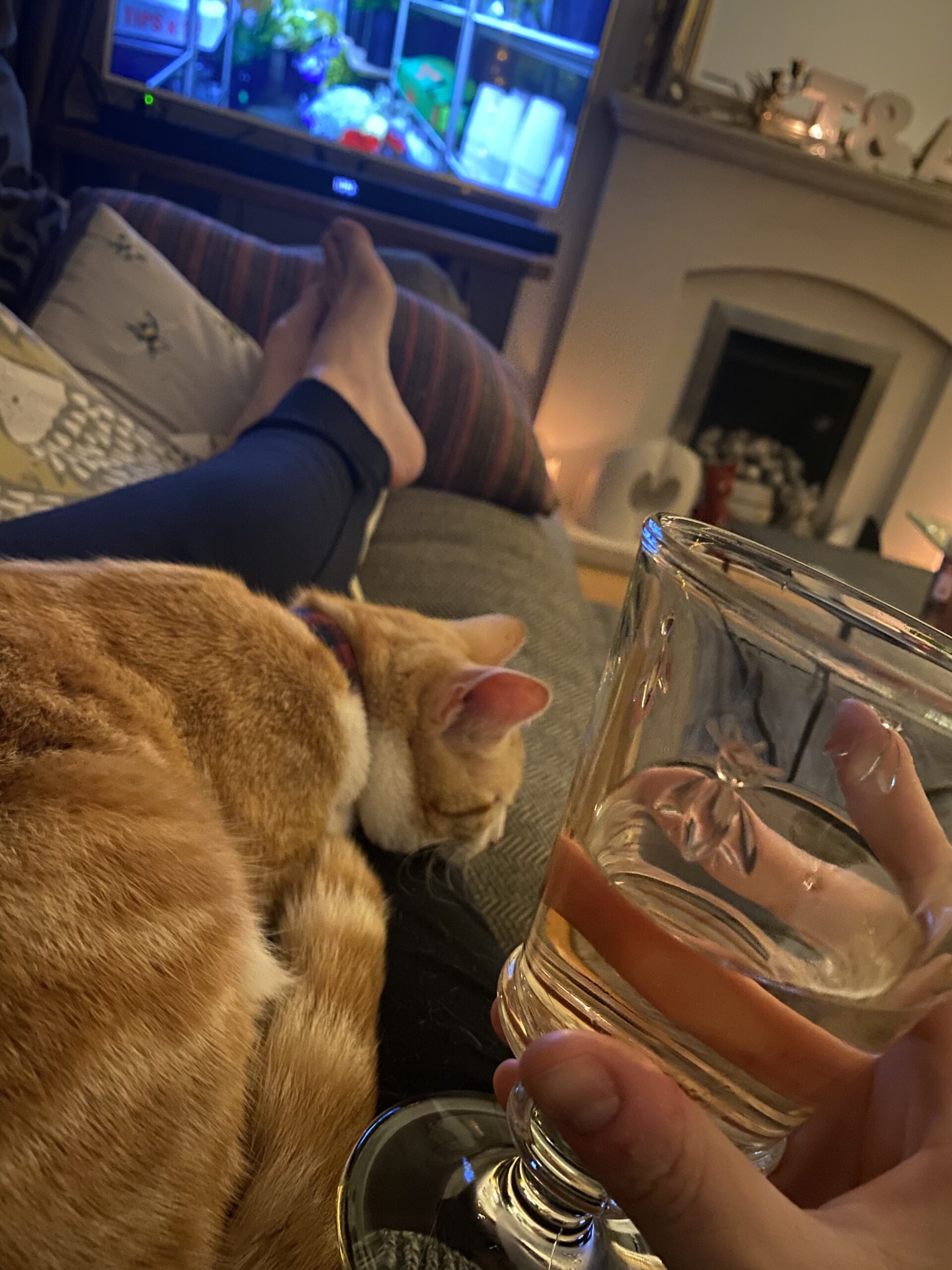 We want for a wander along the Thames yesterday, ending up with a spur of the moment late lunch at Cafe Murano in Bermondsey. Three courses of delicious food, cocktails, wine … uninterrupted conversation between Andrew and me, and by 5pm we were full, tired, and contented, and went home to spend a lazy evening in front of the TV relaxing.

I started with ricotta, tenderstem broccoli and hazelnut pesto, which was fresh and light, and seemed positively virtuously healthy!: 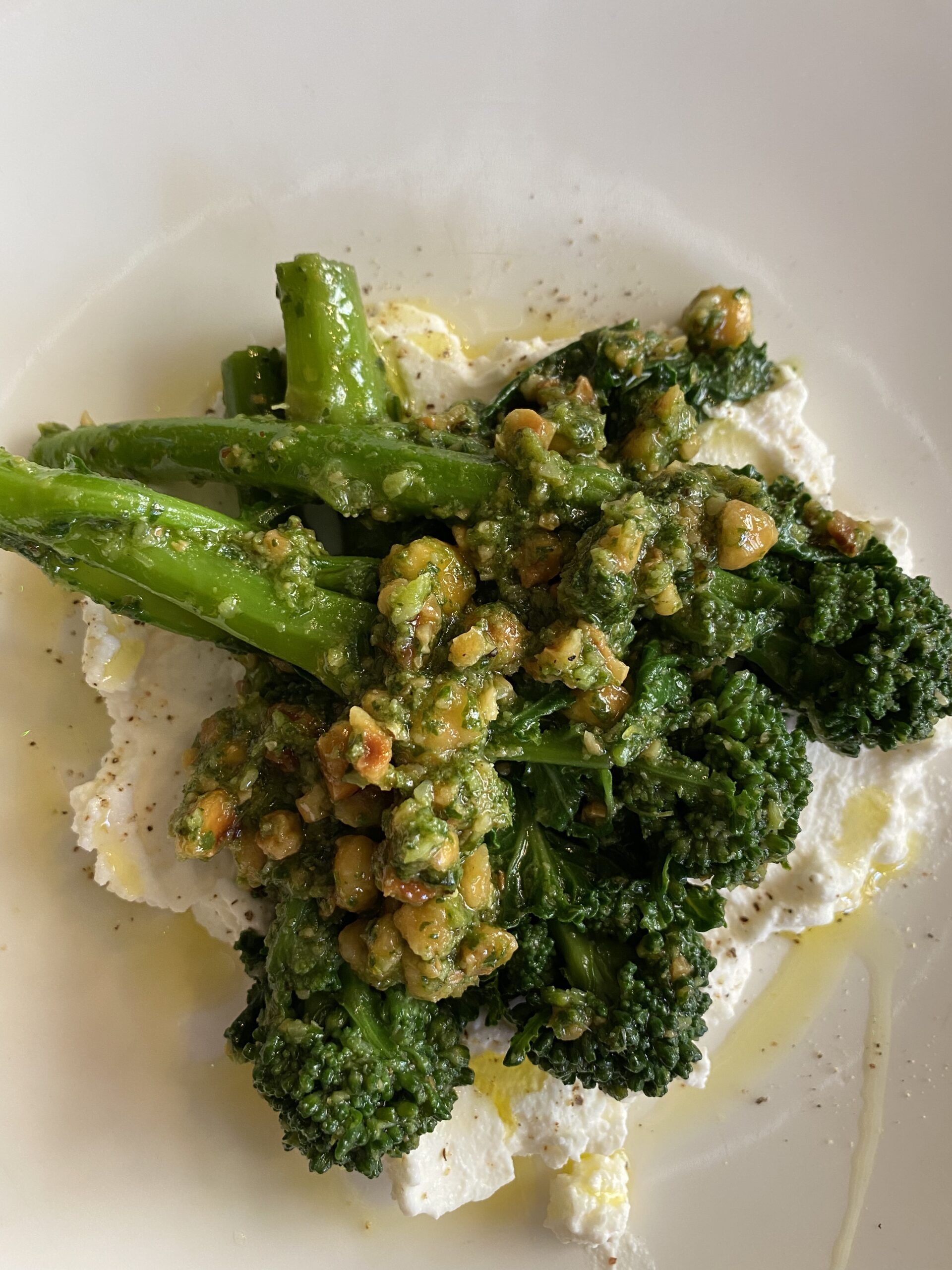 Followed by crab risotto, which had a lovely flavour of crab, with some extra white meat flaked on top. I prefer my risotto to be slightly more cooked so that the inside of the rice isn’t chalky, but I assume that the al dente way is authentically Italian, even if not quite to my tastes: 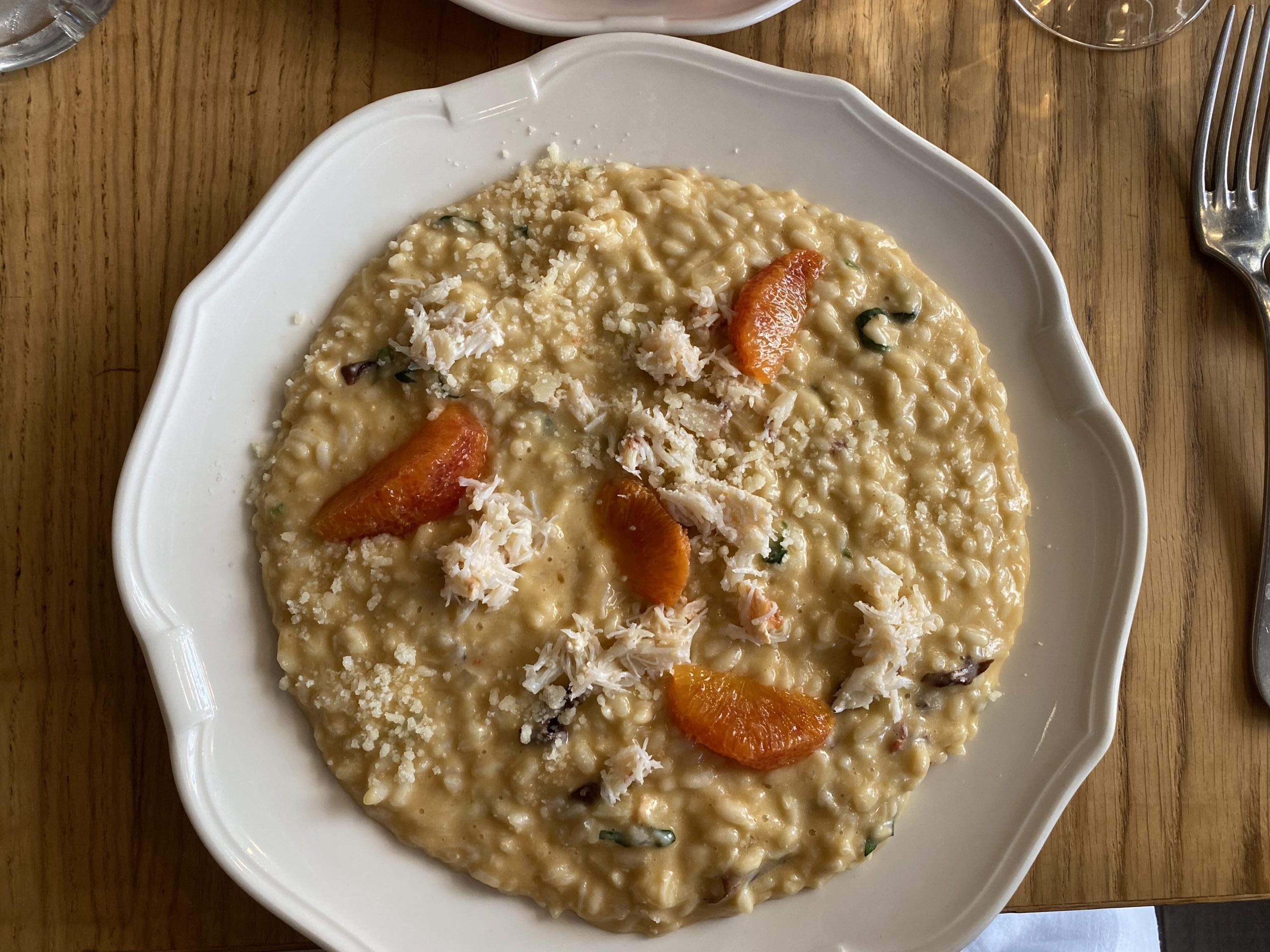 And finishing with muscavado tart, which had a crisp pastry and almost custard-like inside, with the dark caramel flavour of the muscavado sugar. I asked for vanilla ice cream instead of crème fraiche, which I don’t like, and that was delicious and speckled black with vanilla: 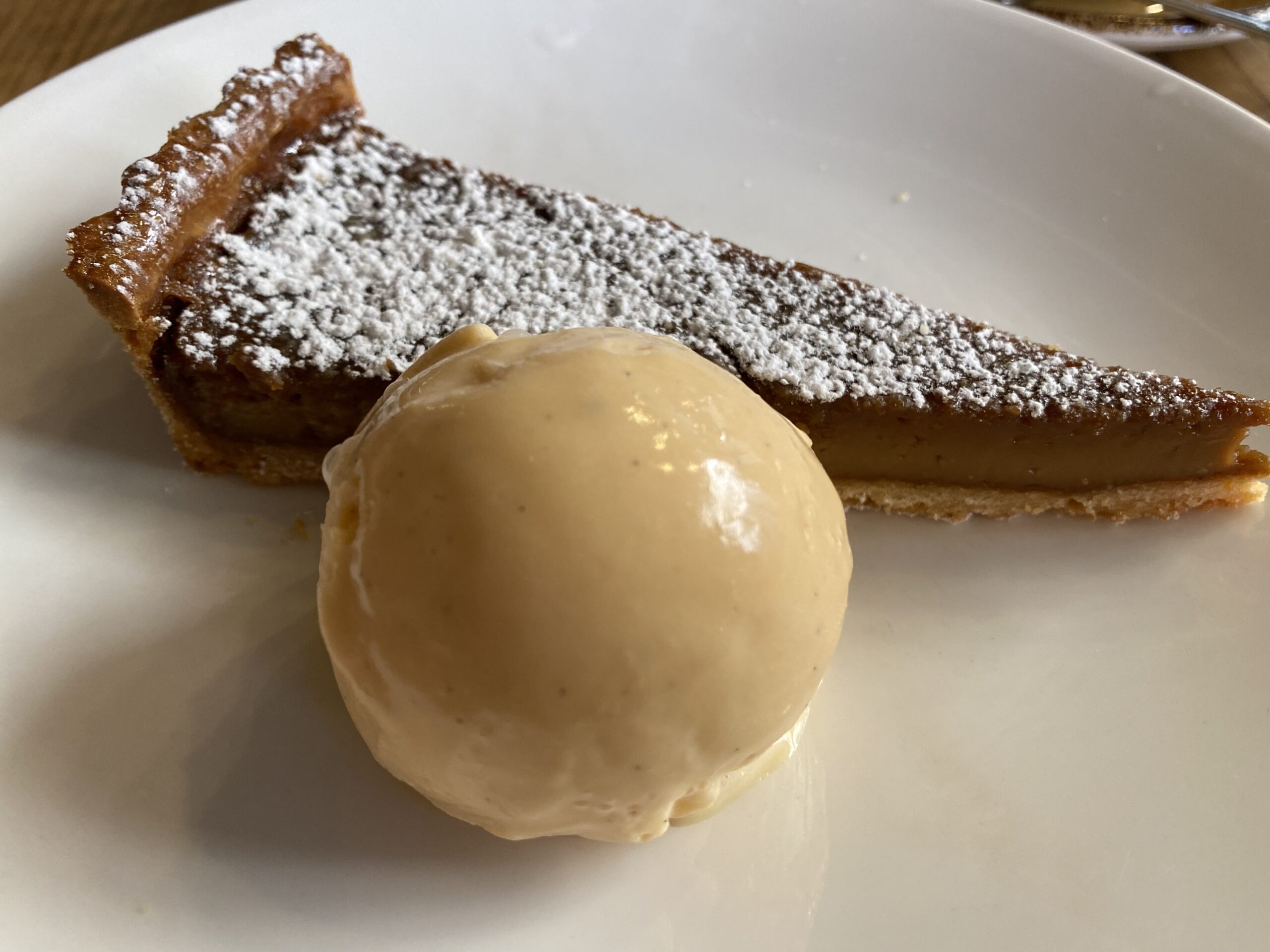 Andrew had salami to start, with crispy crackers: 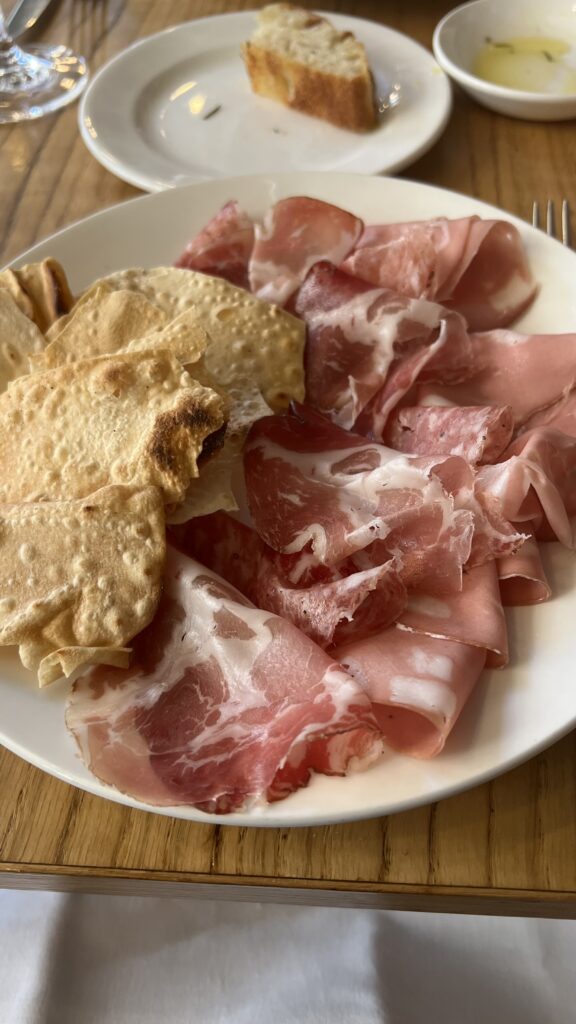 Then gnocchi with lamb ragu, and the gnocchi was light and airy – something I have never been able to achieve with my own (be it homemade or shop bought, the latter always being a bit sticky inside): 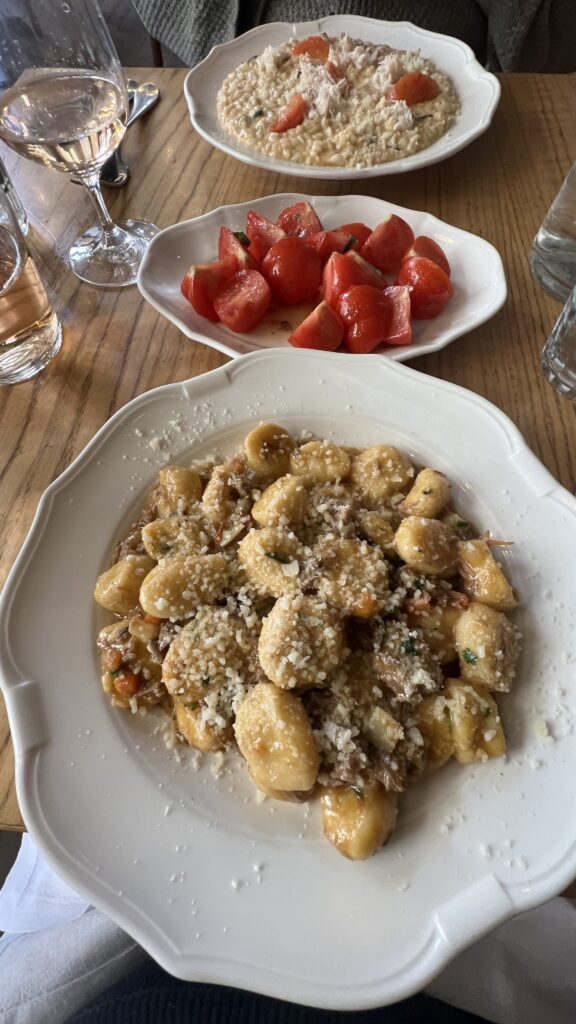 And finished with a beautifully wobbly panna cotta with rhubarb, which I obviously stole a large spoonful of – smooth, creamy and not too sweet, just stunning: 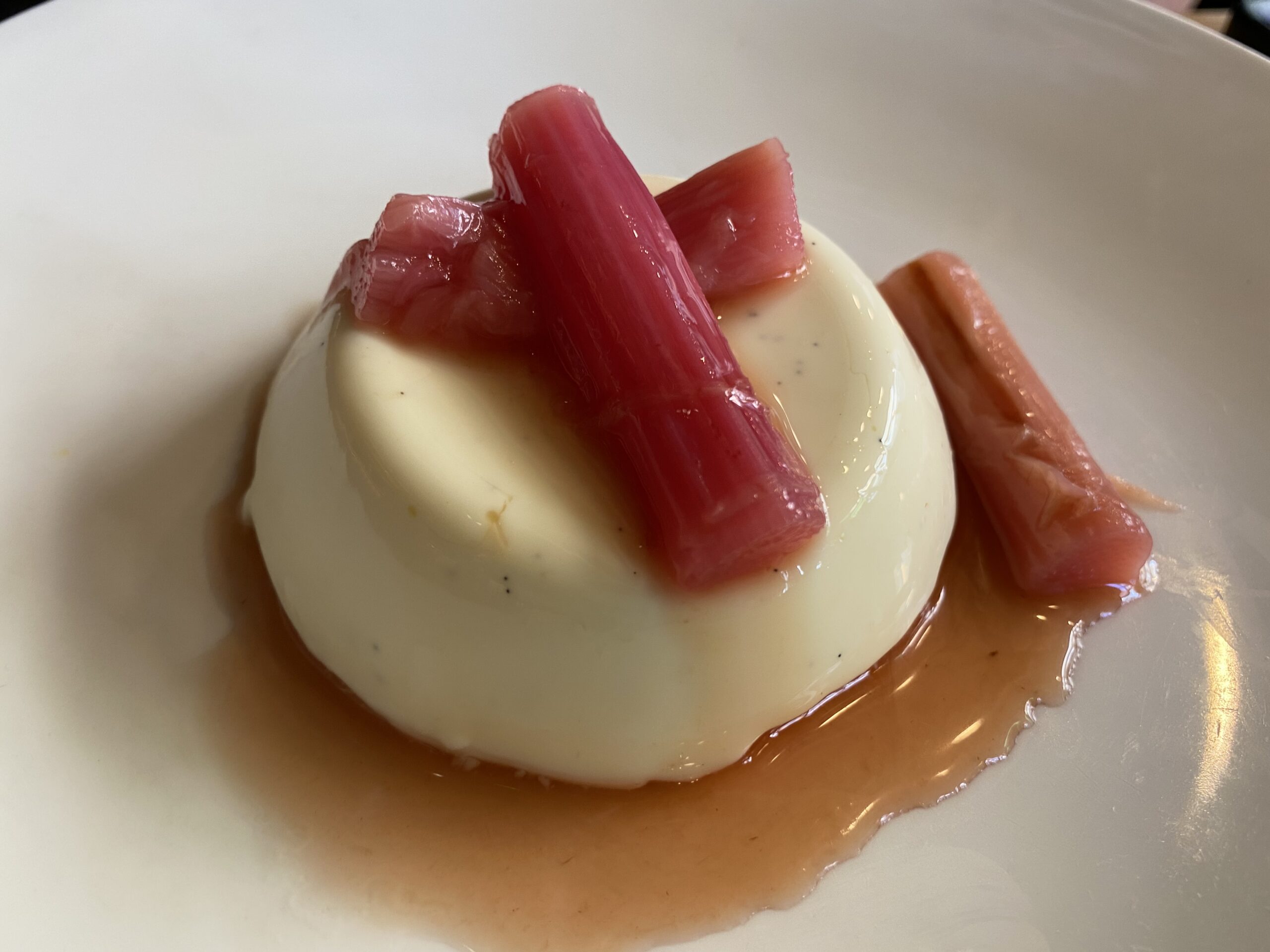 As much as we have enjoyed our week without parental responsibility, I am really missing Ioan, and can’t wait to cuddle up with him on Tuesday when he gets back. My brother has kindly offered to look after him while we work  next week, so they will be having a fantastic time together.

Later in the week we have friends visiting from Paris who we haven’t seen since pre-pandemic, so I have been planning a British menu which I hope they will love.

For Easter weekend we’re going to be joined by family, who we have also barely seen since the pandemic, including Ioan’s cousins. I have a feeling that it will be a far from relaxing weekend, but I can’t wait to see everyone again! The menu might be reshuffled depending on what we end up doing spur of the moment on the Easter weekend, but here is what I have in mind.