When people ask how I first got interested in cooking, I usually say that when I went to university and had to feed my greed, I taught myself how to make food that I enjoyed eating. It also helped that I started going out with Andrew in my second year, and he was also greedy and needed to be fed – our joint budget meant that we were able to eat slightly better than the usual student fare of pasta and baked beans … although generally our shopping basket was filled with (*cringe*) Safeway Savers sausages and cheese, and once the BSE crisis hit we ate more than our fair share of cut price beef.

However, there’s no doubt that I was also influenced by growing up in a home where home-cooked food was the norm and the ready meals / processed foods which my brother and I craved and begged for were treats (or at least so I thought at the time). Even though our dinners rarely got more exotic than spaghetti bolognaise with garlic bread (she never left the mushrooms out of the bolognaise sauce and I deeply resented having to pick out every slimy slice), and salad was shredded iceberg lettuce, sliced cucumber, tomatoes and the occasional radish and red pepper, being expected to help my mum or nan in the kitchen undeniably gave me the confidence in adulthood to make the basics without the need to follow a recipe.

I remember being expected to help to make pastry (jam tarts and biscuits always being slightly burnt around the edges but still scoffable), shepherds pie, spag bol, fish pie, victoria sponge and christmas cake, crumbles, toad in the hole and roast dinners. My versions of the same include what mum would probably consider to be unnecessary (and expensive) additions such as fresh herbs in the pasta sauce, anchovy sauce in the fish pie bechemel, vanilla extract in the sponge mix etc, but they are still pretty similar to what she originally taught me (less burnt though, as I keep a closer eye on the oven than she ever did …).

She also taught me what not to do in the kitchen – don’t cook mini chicken kievs in the deep fat fryer so that they explode in there (although of course we were still forced to eat the dry ‘chicken’ husk); don’t leave the Christmas turkey in the hot oven throughout Christmas eve night to rest unless you want turkey drumsticks which resemble dog chews; don’t roast your potatoes in the oven until you practically have to open them with a nutcracker to retrieve the small nugget of white potato left at the centre of the roastie.

However, because of the way she cooked my dinners growing up, I do still prefer a leg of lamb cooked to death so that the fatty outside is crunchy and crispy, and I like eating the crunchy overdone chips and potatoes more than the normal ones.

Cooking for my mum is always – in the nicest possible way – a bit of a pain in the neck though as she is convinced she knows better than me … and because I inherited that same opinion from her, I am 100% convinced that I am correct. But when she came over last week to drop off some birthday goodies and she requested prawns and pasta for dinner, I thought there wasn’t too much we could argue about. I had made a sponge cake in advance so I knew she wouldn’t be able to get me on that, although I did have to make the chantilly cream in her presence which produced a mini bitch about how I hadn’t scraped every last dribble of double cream out of the container before whisking it (yeah, whatever). She also had to have her say about the best way to wash raspberries (in a sieve, dunked into water – never pour water on to them), but I didn’t wash them so ignored that tip. In your face, mother!

We briefly argued about how much pasta was required to feed 3 of us (it ended up being too much), but as I would rather have leftovers than go hungry I deferred to my dear mum … although obviously I was using too much water to cook the pasta in (in her not so humble opinion), and I didn’t cook enough prawns for everyone. She ate it all, so I don’t think I did too badly in the end.

No arguments about the sponge cake ( apparently I cut it in half in a very strange way, although I never found out what the correct slicing approach was), but I did get moaned at for photographing all my food for my twitter account so it looks grey! We had to take several pictures of the sponge – the best one which got the Mother Knattster seal of approval heads up this post. I hope you will agree that there is not a shadow of grey to overshadow the glory of the cake.

And whilst I make fun of my mum’s moaning, of course I am still learning from her today. Just before Christmas she taught me how to batter and fry my own fish – 1000 times better than that from a fish and chip shop and it would easily rival what is served in restaurants. At Christmas we made and decorated our Christmas cakes together. Whenever I want to make yorkshire puddings, it is her recipe I defer to, not Delia’s. My next project will be to make her steak and kidney pudding, and I will need her guidance, having never steamed a pudding before.

So I think it’s fair to say that I can thank my mum for my passion for cooking, although I thank her less for passing down the greedy gene to me!

Put the pasta on to cook and in another pan sautee the garlic and chilli in olive oil, then add the sliced tomatoes and cook the tomatoes until soft. Add a pinch of sugar if necessary. Then add the prawns, herbs, seasoning and lemon juice and serve as soon as the prawns are cooked through. Drain the pasta and stir into the sauce and serve with garlic bread and a side salad.

Mix flour, sugar, butter, eggs, vanilla and milk together in a food processor and bake in a tin for around 40 minutes at 180 degrees. Once cool slice in half and fill with the cream which has been whipped together with the vanilla paste and icing sugar. Add the raspberries and sandwich the two halves together, and dust the top of the cake with icing sugar (or not, if your mum proclaims she doesn’t like icing sugar on top of cake!). 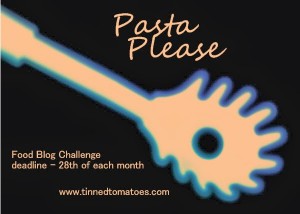 I have submitted this post to Pasta Please – you can find out more at Hungry Healthy Happy and Tinned Tomatoe.

5 Replies to “Cooking with mother”