It’s a week which is going to have to go pretty much unplanned: I am in Paris with work on Monday to Wednesday, so at the mercy of Eurostar, the staff canteen, and whatever I can find near my hotel for dinner. Just looking at my diary, I am not sure I can plan anything as it’s such a busy week – drinks with a friend on Friday, the 6 Nations final on Saturday … meaning a hangover for Andrew at least on Sunday! 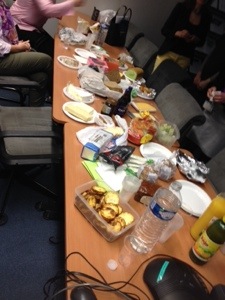 On Monday morning I ate breakfast on the Eurostar, which as usual was not brilliant (Raymond Blanc is responsible for the menus now, but he needs to sort out the portion sizes as you could never describe the food as value for money!). What I could at least plan was a culinary adventure for Monday lunchtime. As I am in Paris for a workshop with our local website managers, who are travelling from Spain, Belgium, Italy, Germany etc, I  suggested that we each bring along something to eat from where we were born, or live, or love. I suggested savoury or sweet, homemade or shop bought, and was able to try some lovely new things.

I brought along a selection of British cheeses to taste (I needed to show those Frenchies that British cheese is at least as good as its French counterpart):

From the Italian office we received lard from Francesca – okay, it doesn’t sound appealing (nor healthy) but it was strongly flavoured pork fat which is sliced thinly and served on warm bread – even on cold bread it was delicious. Alberto bought some salami for us which was delicious.

Ursula bought us pretzels from Frankfurt; Katrien gave us beer, bread and cheese from Chimay in Belgium (9% proof beer!); Sudarat bought us some of her traditional celebratory cake called kanom chan; Sheryl gave us cake made with a pandam leaf and pork buns; Maxime tried to compete with my British cheese with some French specimins: salers, comte, sainte-maure (not as good as the British ones, obviously); Jeremy gave us brillat-savarin with a layer of truffle in the middle; Odile made us quiche lorraine; Sophie gave us pain d’epice.

Estelle bought from London carrot cake and victoria sponge; Belinda gave us cake from Normandy which was like pannetone; Helene gave us more booze with Normandy cider (apparently much superiour to the Brittany one); and Menso from Holland gave us stroopwafels. Leticia arrived late, but with the largest pack of violet sweets I have ever seen. Isabelle isn’t even in the web community but still managed to make us a pear and chocolate tart!

Tonight we’re going for a team dinner at Le Dada restaurant in the 17th. I haven’t been able to find a website for the restaurant, but apparently it’s a typical French  bistro, so I am keeping my fingers crossed that my favourite Confit de Canard will be on the menu.

As breakfast is not included in my hotel bill and I refuse to pay 25 euros for the hotel petit dejeuner, I’ll be buying a fruit salad and coffee from Starbucks (or maybe having leftovers from today’s lunch). Lunch is due to be pasta take out from a local store, and then for dinner I’ll do  my usual trick of heading to Monoprix (a local supermarket which I love) for some salad, cheese and bread for my dinner. And maybe some fromage blanc (which I am addicted to) and perhaps a little (or not so little) bar of chocolate for a sugar hit!

Wednesday will be Starbucks again, the staff canteen for lunch, and then Eurostar for dinner. Doesn’t sound much fun does it? So maybe I’ll treat myself to something from M&S for a nice fresh dinner on Thursday night – I do love their lightly dusted plaice fillets, maybe with some salad or veg. Friday night will be a liquid diet at my friend’s birthday drinks, and on Saturday I’ll either be watching Andrew getting progressively drunk while he watches rugby, or waiting for him to call me from the pub so that I can assess the state he is in. Depending on the results of the rugby, and the state of his hangover, will decide whether I’ll be doing a normal meal or not on Sunday!

You can find out more about meal planning At Home with Mrs M.