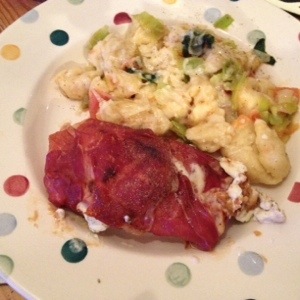 As Andrew very kindly bought me various bits and bobs so I could make Italian dishes, I have been a lot more adventurous in making homemade pasta recently. However, it is a bit of a faff to make, and probably too much effort for an after-work dinner. So I decided to give gnocchi a go, knowing that the most time consuming part is boiling the spuds to make the gnocchi dough.

In all honesty I wouldn’t do it again on a weeknight, as whilst it was easy to make the gnocchi, on top of my usual weeknight chores it was a bit of a bind, and so it suits weekends better. However, I don’t think I will ever buy gnocchi again, as the homemade stuff is far superior – it’s much lighter than the shop-bought version, and you can really taste the potatoes in it as well. 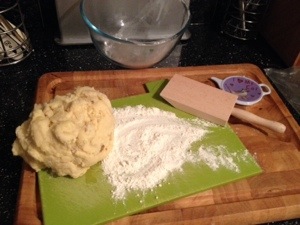 I also had an ulterior motive for making the gnocchi as I wanted to use up some delicious wild garlic which is growing in our back garden. I’d had a gnocchi dish with butternut squash and wild garlic in Wales last year, and that’s what gave me the idea, although in all honesty when I’d cooked it you couldn’t actually taste the garlic in the dish so I need to use it with something more delicately flavoured next time (or maybe use more wild garlic – I was a bit cautious as I’d heard that wild garlic can be mistaken for a poisonous flower which kills you if you eat it!). 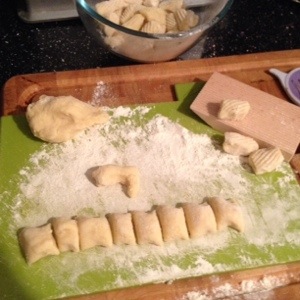 Finally, for my meat accompaniment I made a new recent favourite of ours: chicken breast stuffed with low fat cream cheese and wrapped in parma ham. This way of cooking the chicken is easy to assemble, keeps the chicken moist and has a fabulous flavour. I used low fat cream cheese which was flavoured with garlic and herbs (as it was on special offer from Ocado, but you could of course make your own flavoured cheese), and sliced a slit in the side of the chicken in which to stuff the cheese. It’s a bit messy but that doesn’t matter as once you wrap the chicken in parma ham you can’t actually see the mess you have made inside – always a bonus. Depending on the size of the chicken breast you’ll need to cook it for 20-30 minutes in a 180 degree oven. 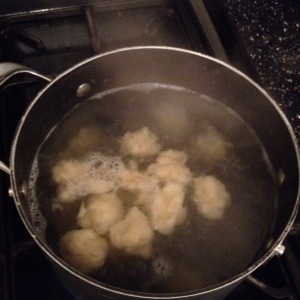 For the gnocchi I used a recipe in my new Italian cookbook ‘Pasta Artigiana’ by Nino Zoccali. First you have to boil the potatoes in their skins to keep a strong potato flavour – now normally I wouldn’t bother with this kind of effort, but as it was my first time making gnocchi I thought I should do it properly. I think it is worth that level of effort so would do it again (quite unusual for lazy me).

You mix the mashed potato with a beaten egg and plain flour (using as little flour as you can to stop the gnocchi getting gluey), and then shape it and boil each little gnocchi in salted water. Once cooked, I mixed mine with the wild garlic, which had itself been sauteed in a little olive oil with some fresh tomatoes.

Now my gnocchi had a minor disaster where I shaped each one using my clever little gnocchi groove maker and then put them in a bowl while I shaped the rest. They all became best friends in the little bowl and stuck together, so I ended up having to re-shape them before dropping them into boiling water. This made them rather larger than planned as I, as usual, got a bit bored and ended up rushing them. That doesn’t really matter too much as you boil the gnocchi until they float to the surface as that means they are cooked, but each gnocchi did end up being rather more than a mouthful. Luckily they were so light that it really didn’t matter, but I’ll be more careful next time. 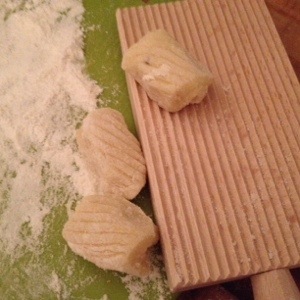 Boil the potatoes with the skin on until soft, and then peel them as soon as you can handle them (as the mash should be hot when you make the gnocchi. Mix in the beaten egg and salt and then the flour.

Using as little extra flour as possible, roll the dough into sausages and cut into bite sized dumplings. You can roll the dumplings over a serrated wooden gnocchi roller to make some small grooves in each gnocchi (this helps the gnocchi hold the sauce), and then cook them in boiling salted water until they float up to the top.

Serve with the sauce of your choice. You could also pre-cook them and make this chorizo bake recipe. 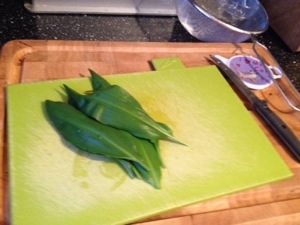 Heat some olive oil in a pan and add the sliced leek and diced tomatoes. Lightly sautee them in the pan until the leek is soft and the tomato has broken down. Then add the wild garlic and stiry until it has wilted. Stir the gnocchi into the sauce and add a little of the gnocchi cooking liquid to the sauce as this helps the sauce to bond with the gnocchi. Add seasoning and serve. 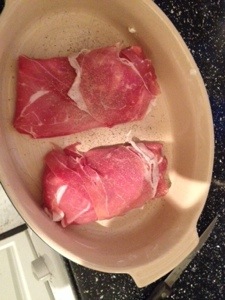 Take each chicken breast and make a slit in the middle to create a pocket for the cheese to sit in. Scoop some cream cheese into the slit (be prepared for it to get messy) and then wrap each chicken breast in 2-3 slices of parma ham – try to cover as much of the chicken as possible. Bake in the oven for approximately 20 minutes but it may need longer depending on the size of the chicken. When the cheese starts to ooze out of the chicken you’ll know the breasts are probably done. Even if slightly overcooked, the chicken remains moist so err on the side of caution and leave the chicken in for longer if you are nervous. I find the chicken doesn’t need anything more than a brief grinding of black pepper as the ham and cheese are quite salty.