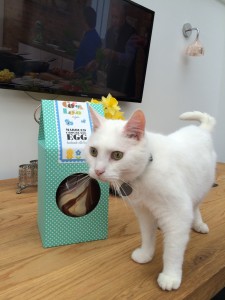 Sometimes it seems a bit of a waste of time to plan an Easter menu around all that chocolate and hot cross buns, and as much as I like to gorge myself on chocolate eggs (this year’s Cocoa Loco mega-egg next to Alfie for scale), now’s the time where my pregnant tummy needs as wide a variety of food as possible to be healthy and also to get our little one used to different flavours. And of course maybe a bag of crisps or three …

Yesterday – Good Friday – was all about the Hot Cross Buns (or Hot Cross Baby Dumvilles) and fish. I am not aware that any specific tradition exists for the Saturday of the Easter break, but having found rabbit in the local Sainsburys of all places, I’ll be making bunny stew. 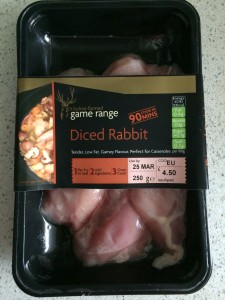 Regular readers will already know that if there’s an animal bone in a meal, Andrew won’t touch it, so I only ever buy filleted chunks of rabbit. Also, rabbit bones are little and fiddly and not worth the effort of picking out when you are lazy like me. This means you need to cook your rabbit in a light broth which doesn’t take an age to simmer, otherwise you will end up with one tough bunny. Treat it like chicken breast chunks and you won’t go too far wrong.

So my basic recipe for bunny stew is to pop the meat, sliced carrots, leeks, onion and pearl barley into a pot with some stock and a bayleaf, then simmer for around 45-60 minutes until the meat is tender and the veggies are cooked. Season and serve with maybe a dumpling or two …

Easter Sunday does have the tradition of lamb, and I bought a half leg on special offer a few weeks ago from Ocado which has say in my freezer for a while. I’ll do a take on my slow roast lamb, and have decided to serve it with dauphinoise potatoes.

I haven’t made dauphinoise before, but am planning to drown the thinly sliced potatoes in a mixture of single cream and milk which has been infused with garlic, nutmeg, salt and pepper, and then bake the whole thing in the oven for a couple of hours while the lamb slow roasts.

Pudding is going to be a rhubarb crumble: I make my crumble topping with plenty of oats and desiccated coconut as well as butter and flour, plus a touch of brown sugar. I’ll use the rest of the cream to make custard to have with the crumble. 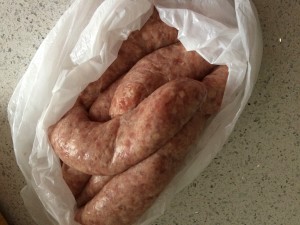 On Monday I’ll definitely be having some lovely Gloucester Old Spot pork sausages I bought in the Cotswolds last week, but I am in two minds about how to cook them. I was planning to make one of my favourite simple tray bakes: sausages, onions, peppers, tomatoes and potatoes all baked in a tray with some olive oil and garlic (although I am off garlic at the moment so will leave that out), and plenty of salt and pepper. The tray bake needs a good hour in the oven at around 220 degrees, with a swift shake every now and then to stop the onions catching.

But … I was just having a flick through a Gino D’Acampo cookbook which Andrew bought me for Christmas, and that has a lovely looking recipe for Sardinian pasta shells with sausage and tomato ragu, so I am a bit torn now. I think I will have to see how lazy I feel on Monday and make a decision then (the Sardinian pasta shells need to be homemade). 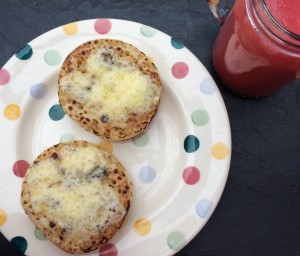 And of course I haven’t even mentioned breakfast: this morning I’ll have a hot cross bun while watching James Martin’s last ever Saturday Kitchen (he wants crumpets with melted cheese). Easter Sunday absolutely has to be soft boiled eggs with soldiers – that’s non-negotiable for me but Andrew doesn’t like soft eggs so he will need an alternative … probably a batch of eggs on toast (it has to be eggs on Easter Sunday, right?).

What are your plans for Easter? Do they involve anything more than chocolate eggs? If you fancy something sweet, then check out some of these indulgent recipes from my fellow food bloggers which have caught my eye recently: