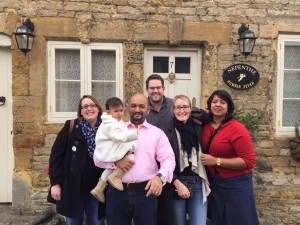 Our good friends Niasha and Jigi returned from Sri Lanka for a short trip back to the UK with their baby Georgie last week, so along with other friends Jo (from Alphabet Adventures) and Billy, we staged a reunion. The last time we saw eachother was 2 years ago when Jo, Billy, Andrew and I went to visit them in Sri Lanka, and Niasha and Jigi actually left the UK four years ago.

A great friendship is often marked by the ability to spend so much time apart but it seem like yesterday when you last saw eachother, and that was the case with us at our reunion. The only difference was that this time we were joined by Niasha and Jigi’s adorable one year old daughter Georgie, who was such a delight to be around that I will be hugely relieved if my own child is even half as lovely as her.

Another sign of a good friendship is having things in common, and what links us all more than anything is a constant greed that means we are always thinking about our next meal. At breakfast we were planning lunch, at lunch we were planning afternoon tea, and on the way home from tea with our bellies full we were still deciding on dinner.

The friendship originally started when Niasha, Jo and I worked together at the company where I still work, and has been characterised from the start by a shared love of food, cooking and eating. Naturally our greedy partners were more than happy to join in with the consumption of treats, and became friends themselves.

So back to the Cotswolds: we decided to hire a cottage for a few days in Stow on the Wold and explore the area together, and get to know Georgie better. On the first night we reminisced over pizza and booze (squash for me), and enjoyed the roaring fire from the living room. 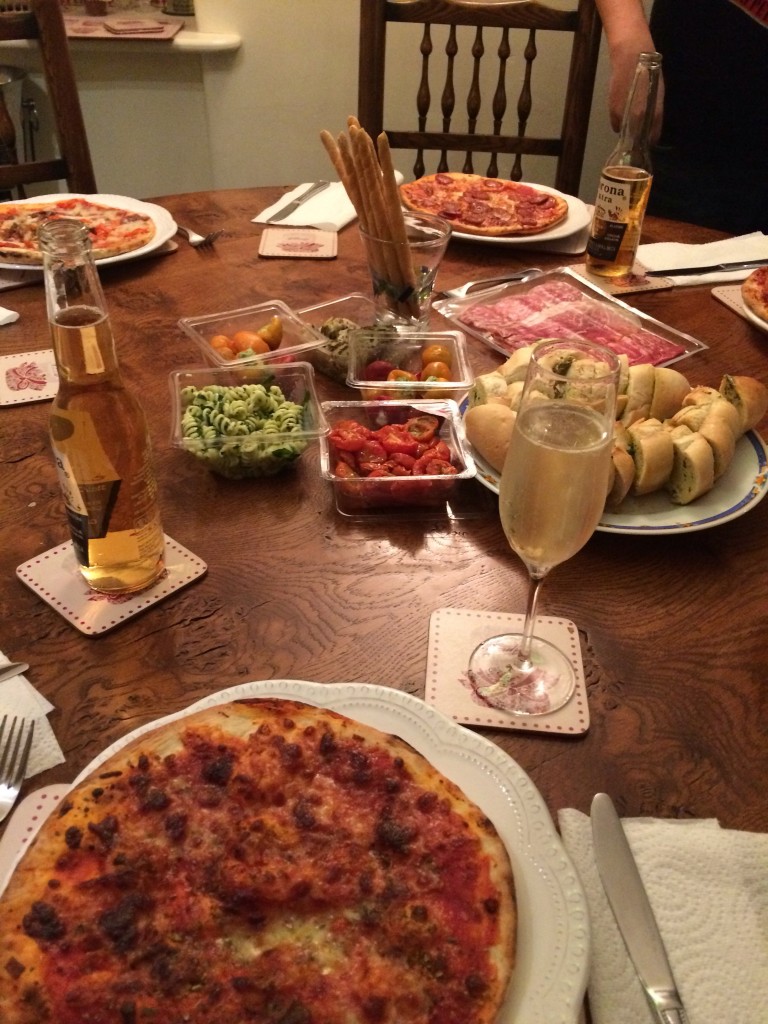 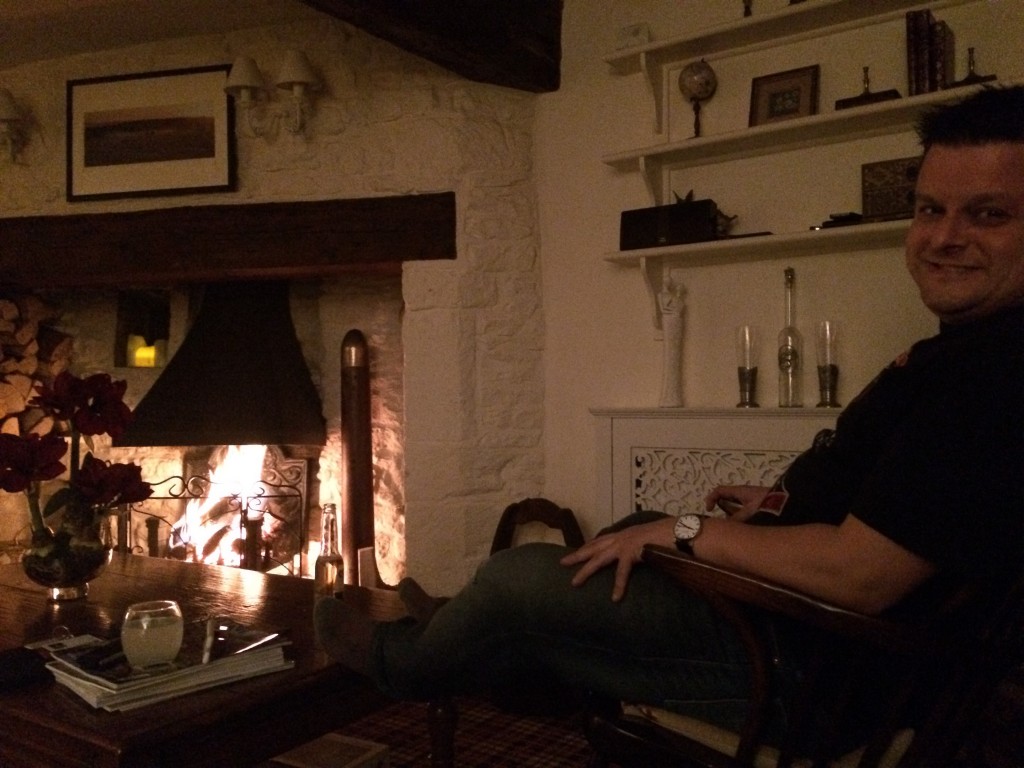 On our second day together Jigi cooked us bacon, eggs and sausages for breakfast before we ventured into Cirencester. A word of advice: don’t bother. It may be considered the ‘capital’ of the Cotswolds but it’s really nothing special, although there was a nice coffee shop which served delicious Welsh cakes with our hot chocolates, and a few quaint shops.

Unable to find anywhere to take our fancy for lunch we drove on to Bibury which is a gorgeous little chocolate-box village. There we found The Swan Hotel, which looked like the perfect place for lunch. Well it wasn’t.

Firstly I was pissed off when we asked for a table in the almost empty restaurant and were told we’d have to sit in the bar instead. We were left to clear a couple of tables ourselves and push them together so that we could all sit together, but they were those low coffee tables which aren’t really suitable for eating a meal at.

Andrew and I ordered a sharing platter of local smoked fish, Jigi and Billy had burgers, and Niasha and Jo had sandwiches. The food all arrived in dribs and drabs despite being ordered at the same time, and I had to ask 3 times for the bread which was supposed to accompany our platter (the surly waiter was another negative point for The Swan). 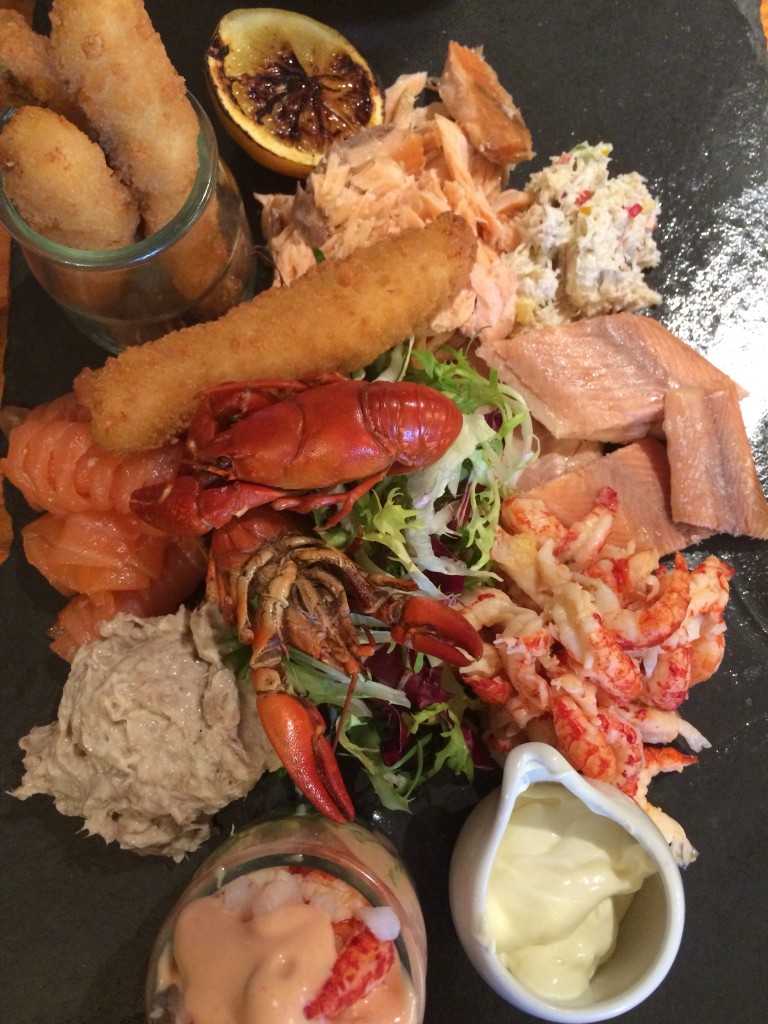 Although our platter was okay (and Jo and Andrew couldn’t resist playing with the food!), the burgers were tasteless and the croque monsieur was dripping in oil as if it had been deep-fried. 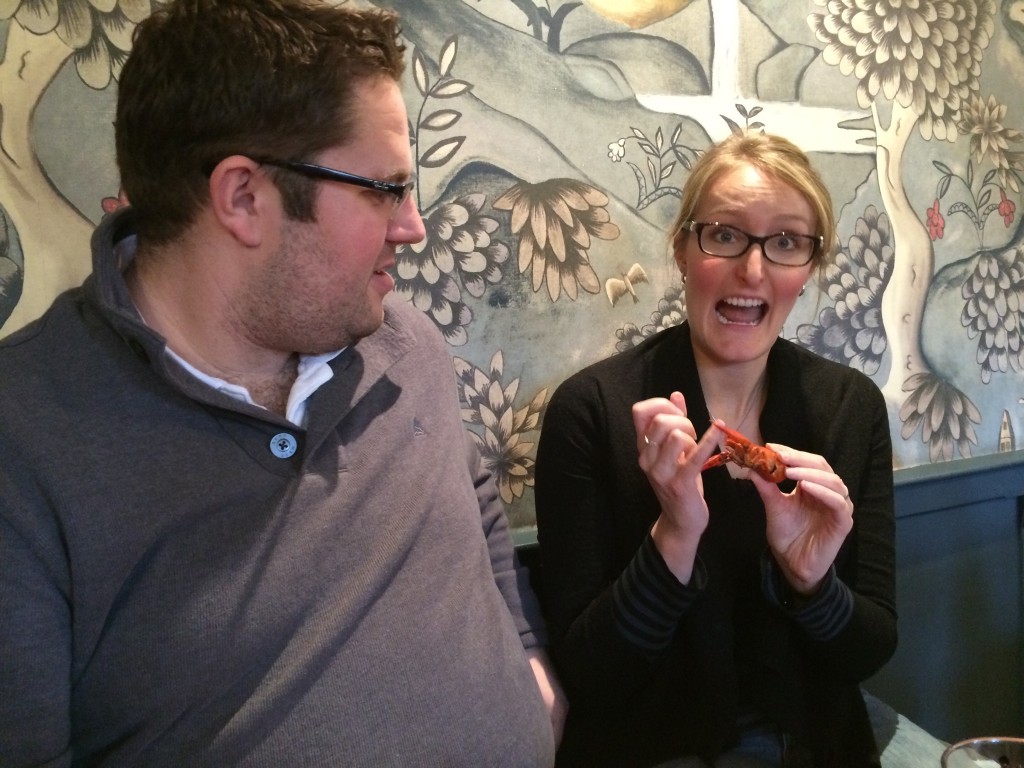 To walk off our crappy lunch we went to Bibury trout farm (that is literally all there is to do in Bibury!), which is apparently the home of the world’s best ice cream. It’s definitely not the UK’s best ice cream, but it was tasty enough, and necessary to revive our energy after feeding the trout (entertaining, but only for a couple of minutes) and watching Jo break up a fight between two randy ducks. 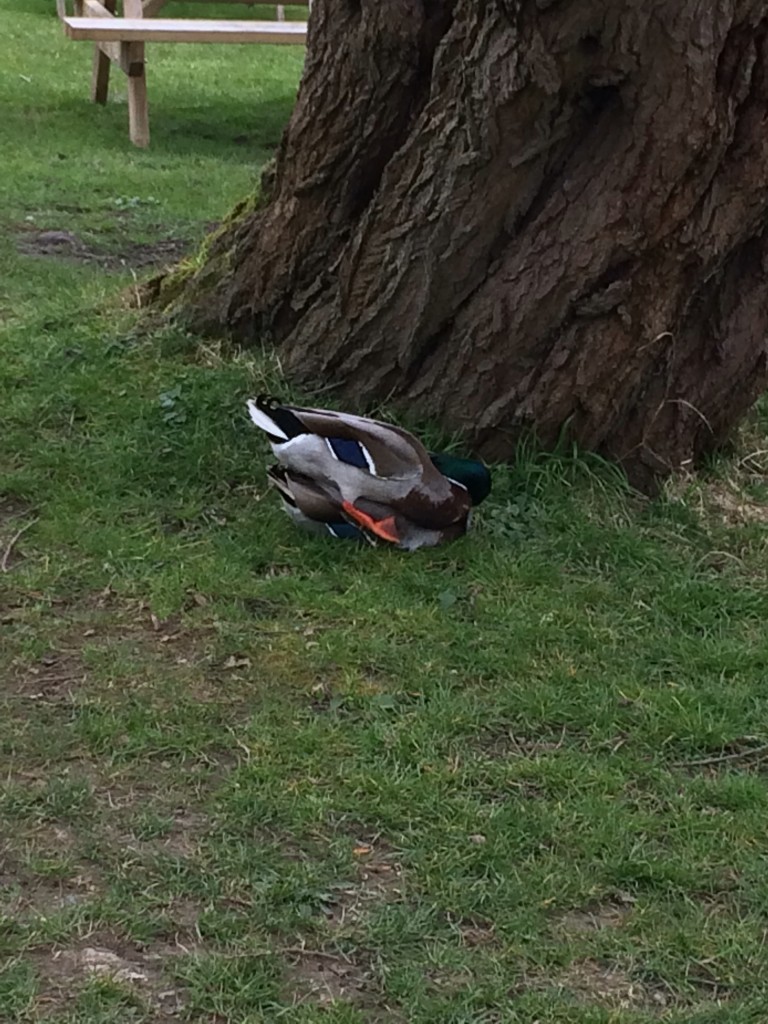 We were dubious about our booking for The Old Butchers that evening, chosen by Jo for its convenience to our cottage (literally opposite), but we were very pleasantly surprised by the place. The staff were lovely, and clearly completely charmed by Georgie (it would be  hard not to be).

I ordered a Cornish fish soup which came with rouille and croutons – although it was a bit under seasoned for mine and Niasha’s taste, it was still delicious. 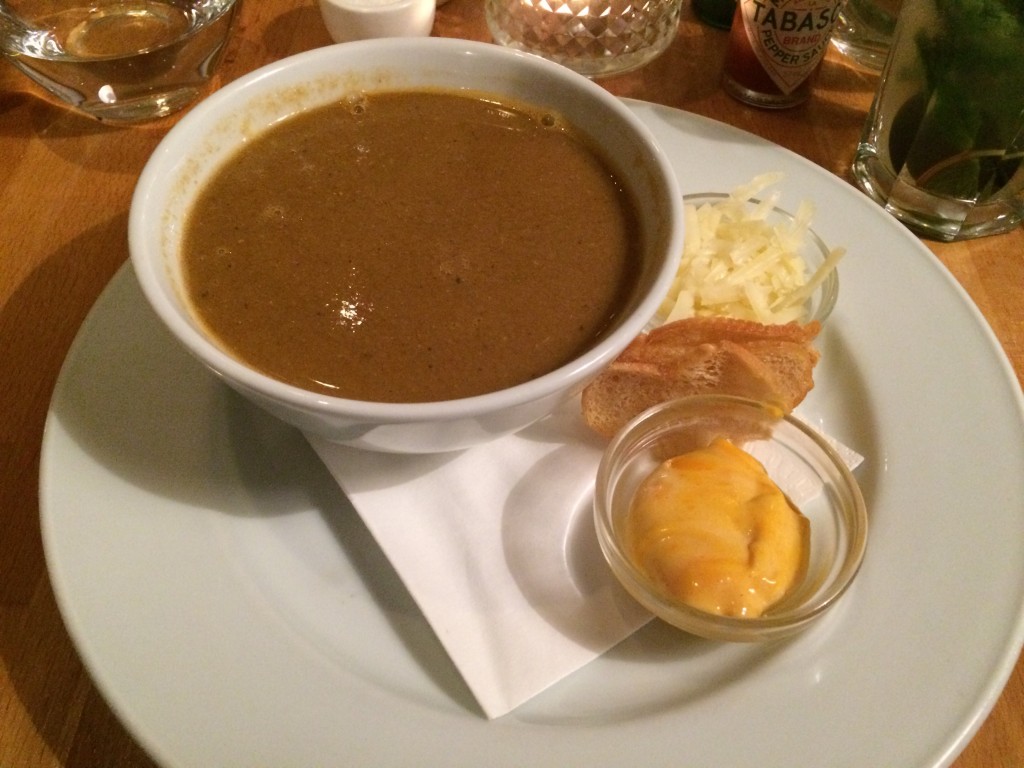 I couldn’t resist a photo of Andrew’s starter (which Jigi also had) of raclette cheese with pickles and cold meats: 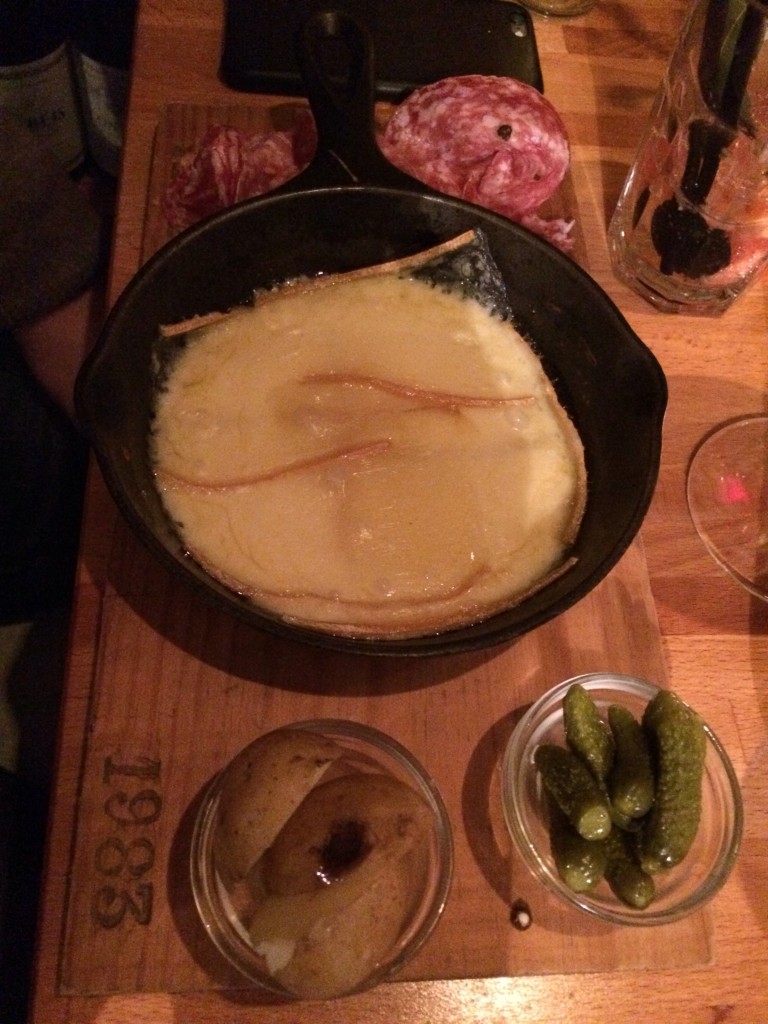 Then Billy and I had steak, chips and bearnaise for our main course, which came with some big fat crispy onion rings too. I love bearnaise sauce so couldn’t resist the choice, even though everything on the menu sounded amazing. 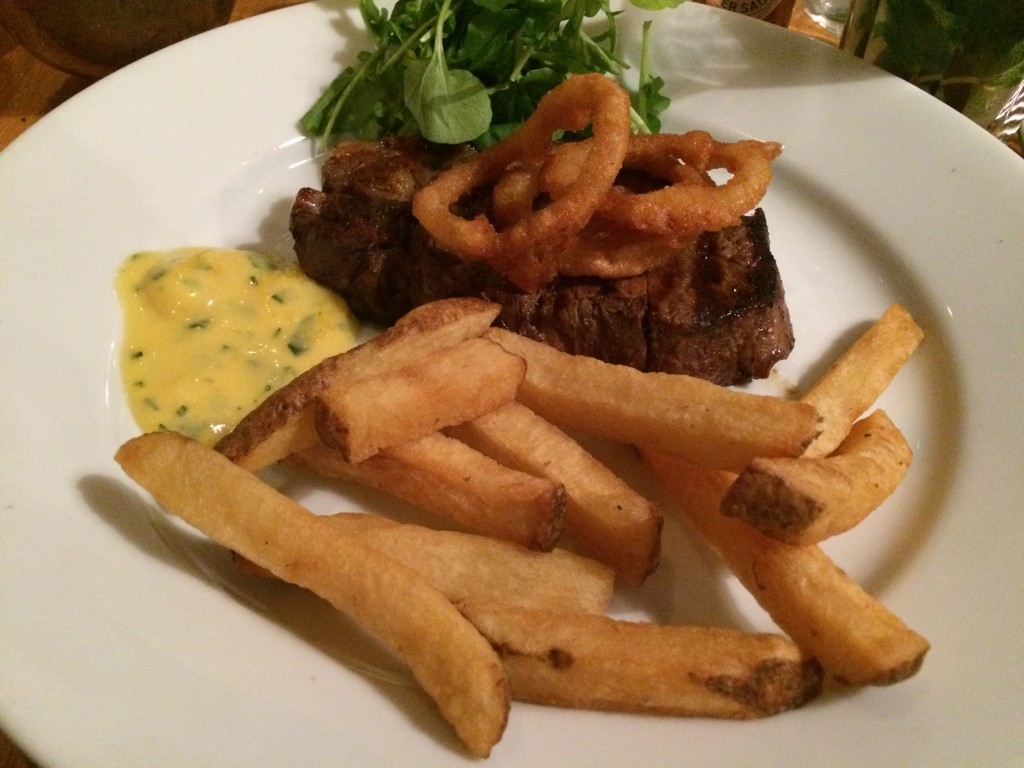 Andrew and Jigi both ordered venison, and you can also see a shot of Jo’s mushroom risotto with poached egg on the opposite side of the table. Niasha had crab and chilli pasta which she enjoyed, although her Sri Lankan palate needed the tabasco from the table to provide the necessary heat! 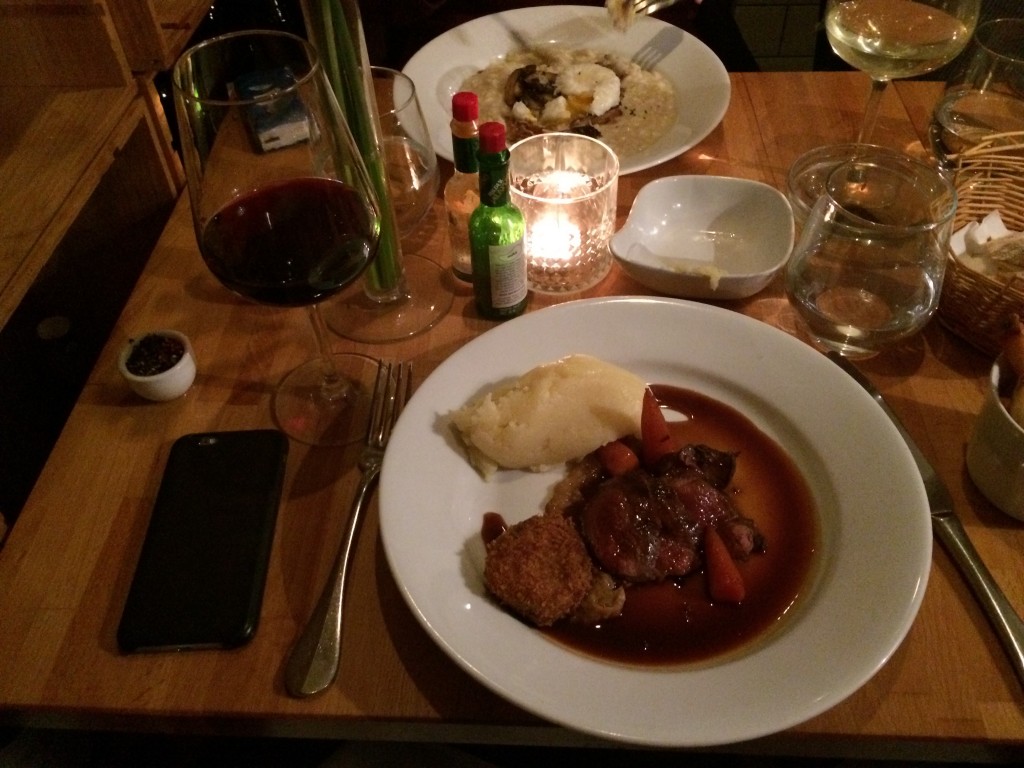 For pudding I could not resist the chocolate fondant, although I asked for vanilla ice cream instead of raspberry. Oh wow it was everything a chocolate fondant should be: dense and chocolate-y with a squidgy liquid centre. 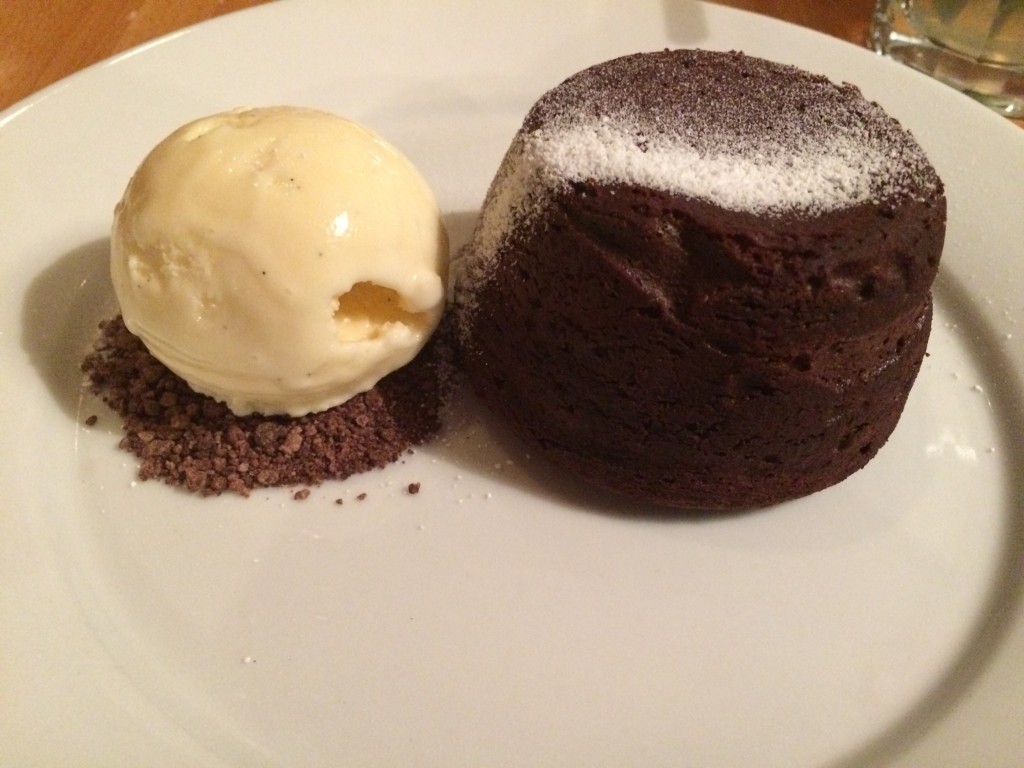 Andrew chose the boozy peach sorbet with champagne, and then we went home to burn more wood and paper in the open fire and listen to music: 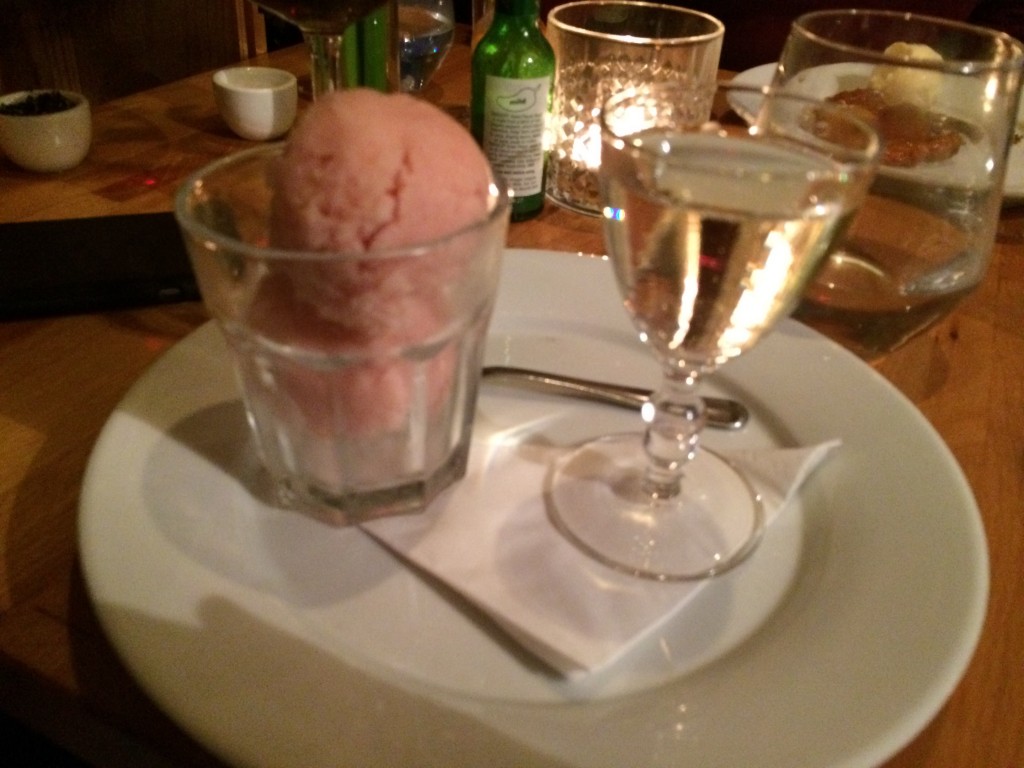 On Wednesday we took a drive down the road to Bourton-on-the-Water, a charming little village filled with cute shops (although one of them sold Gollywogs which was frankly astonishing to us all). As the others were all hungover, we went for egg and sausage baps in a local cafe, and then fed the ducks (photo courtesy of Niasha): 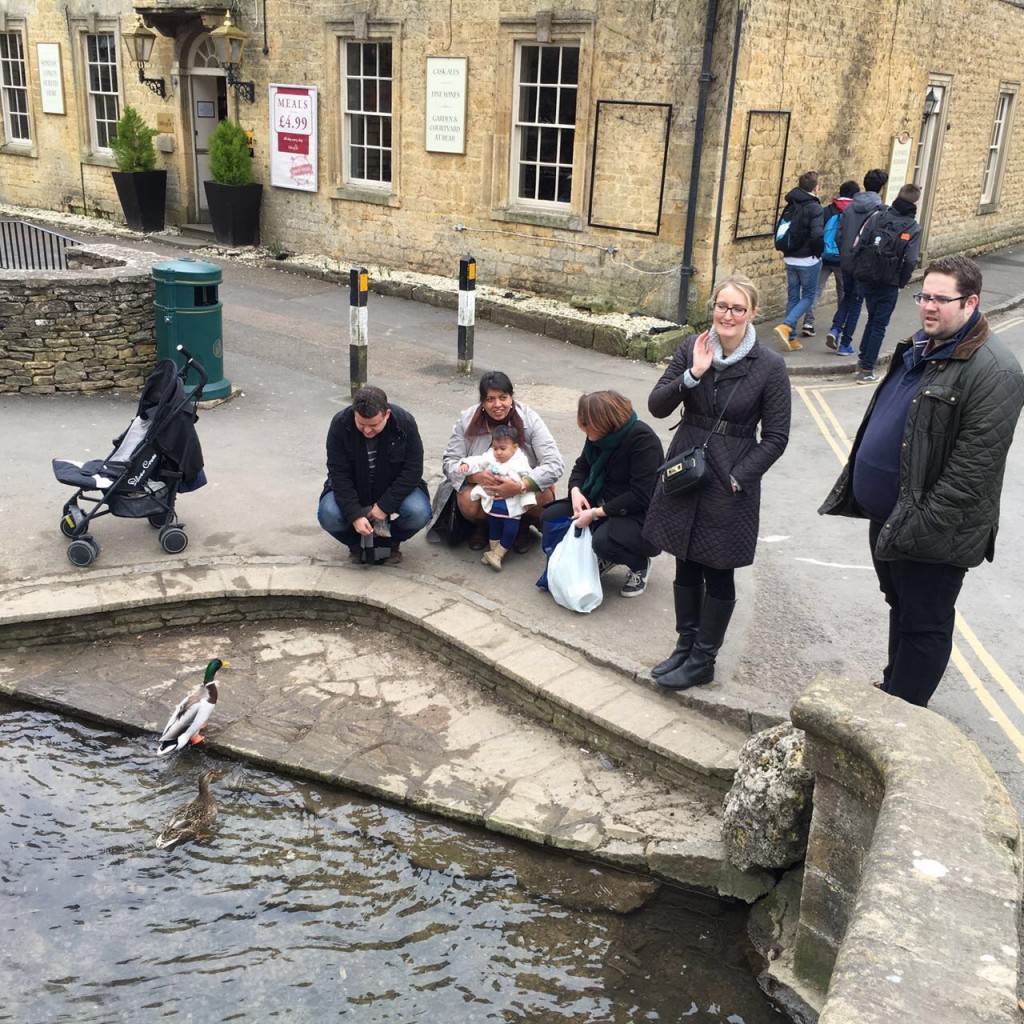 Back in Stow that afternoon (we’d exhausted the available activity in Bourton in around 1.5 hours), we had a delicious afternoon tea at Huffkins – a family-owned business with branches around the Cotswolds. I decided to have their speciality lardie cake which was AMAZING, although everyone else had great things to say about the scones (although the jam was a bit too sticky!). 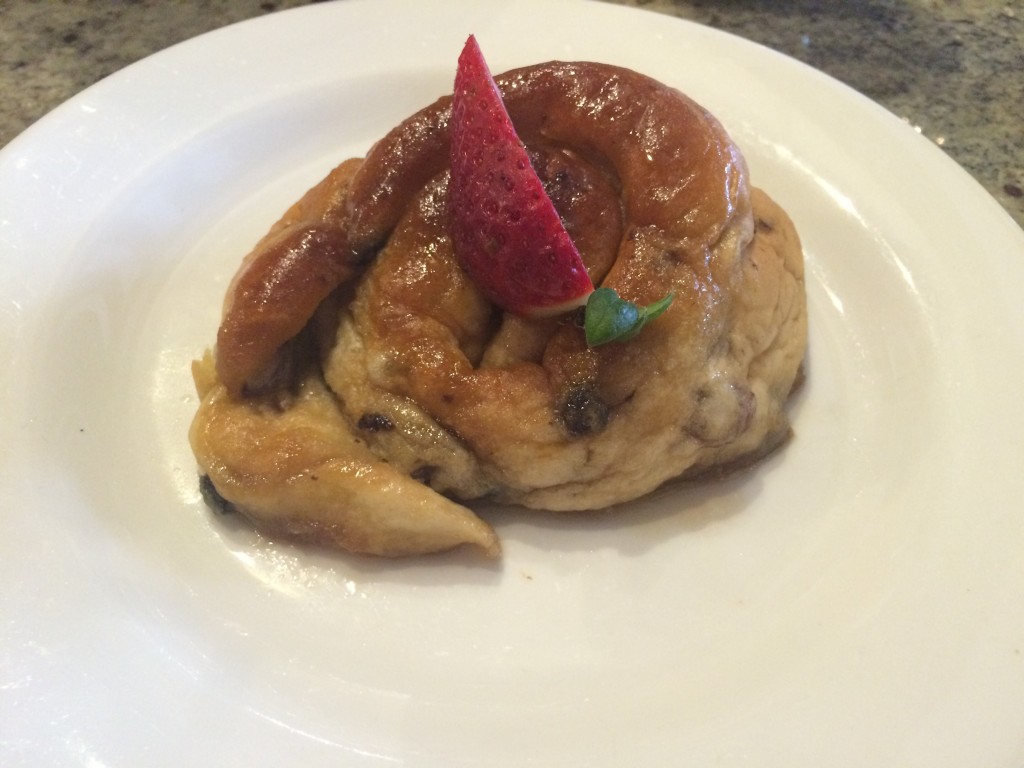 And for no other reason than because she’s a cutie, here’s Georgie charming us all (another snap from Niasha): 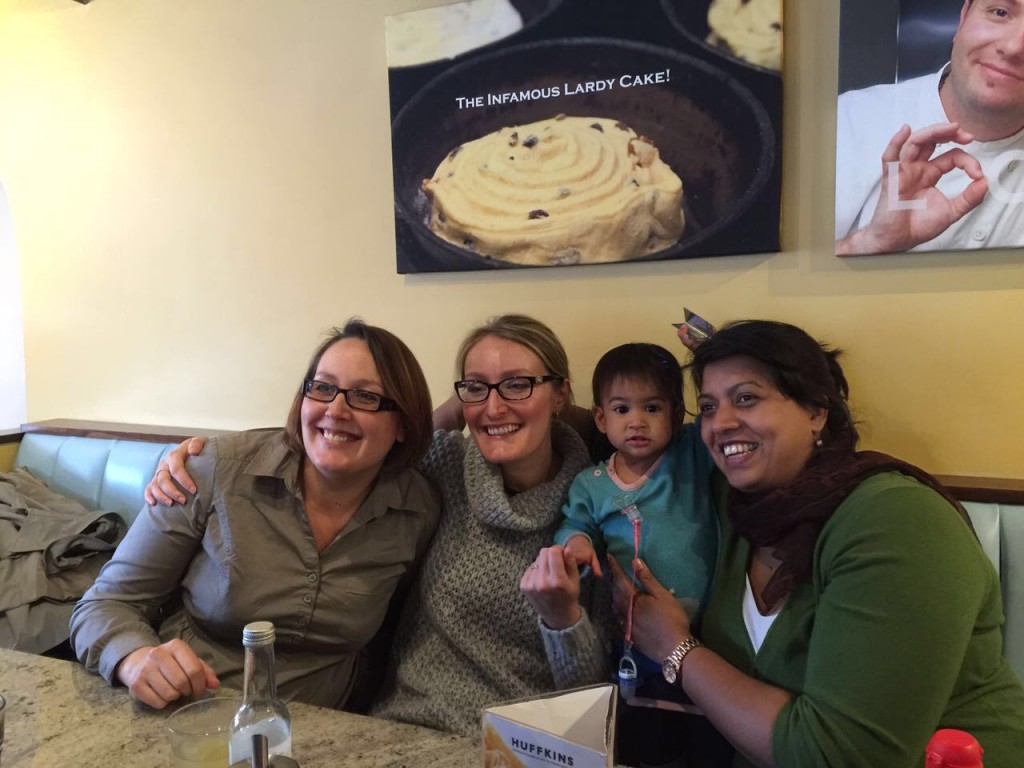 For dinner that evening (you see, our entire holiday revolved around food) we went to The Porch House, a mere few houses up the road from our cottage (our holiday also revolved around laziness). The menu looked the best out of all of our options in Stow, especially as Niasha was keen to eat duck after feeding so many during our trip!

We were given a large table at the back of the pub where Georgie settled herself down for a snooze so that we could get on with the important business of eating. Unfortunately we were unable to get down to business because the service was so incredibly slow, to the extent that when we finally did order, and the waitress finally plugged our requests into the system, the pork belly Andrew and I had both ordered had run out – luckily there was one left which I got to try as I pulled the pregnancy card.

My starter was twice baked cheese souffle with spinach and mustard, which was delicious: 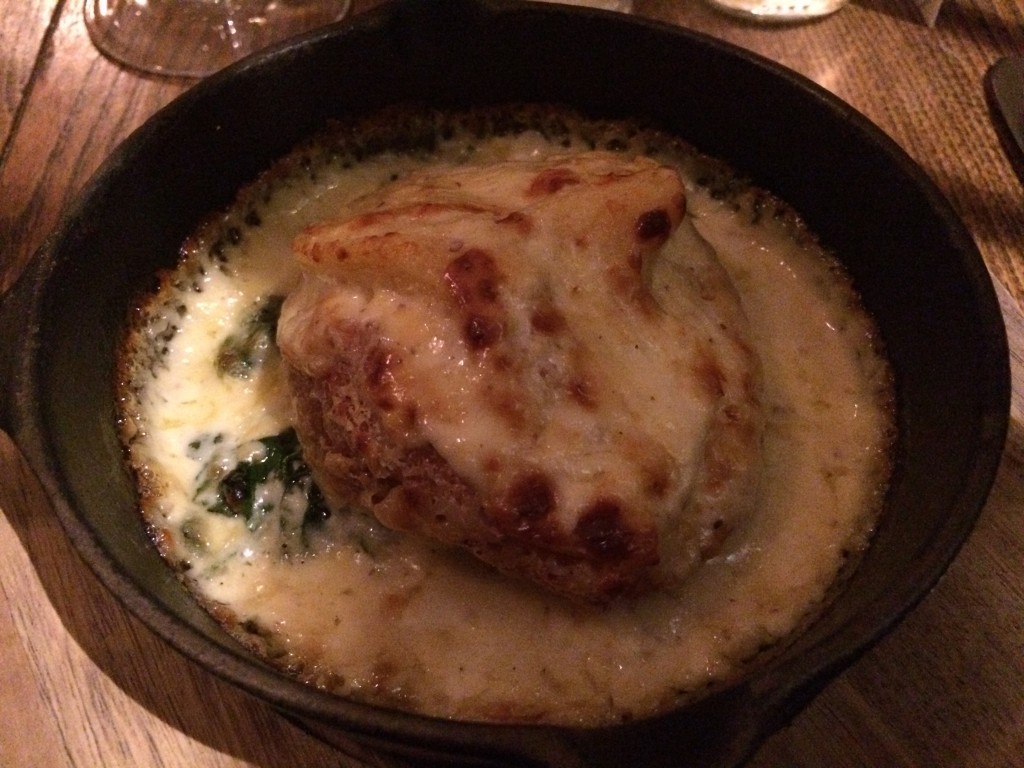 Andrew had pigeon which he said was lovely but I will never be a fan of pigeon so didn’t even bother with a picture. My main course of pork belly with black pudding mash was nice enough, but because we had waited at least 30 minutes between the starter and the main course I was full up and could barely eat half of it. I’d also say that the mashed potato was mixed with an over-generous portion of black pudding and was therefore very filling. 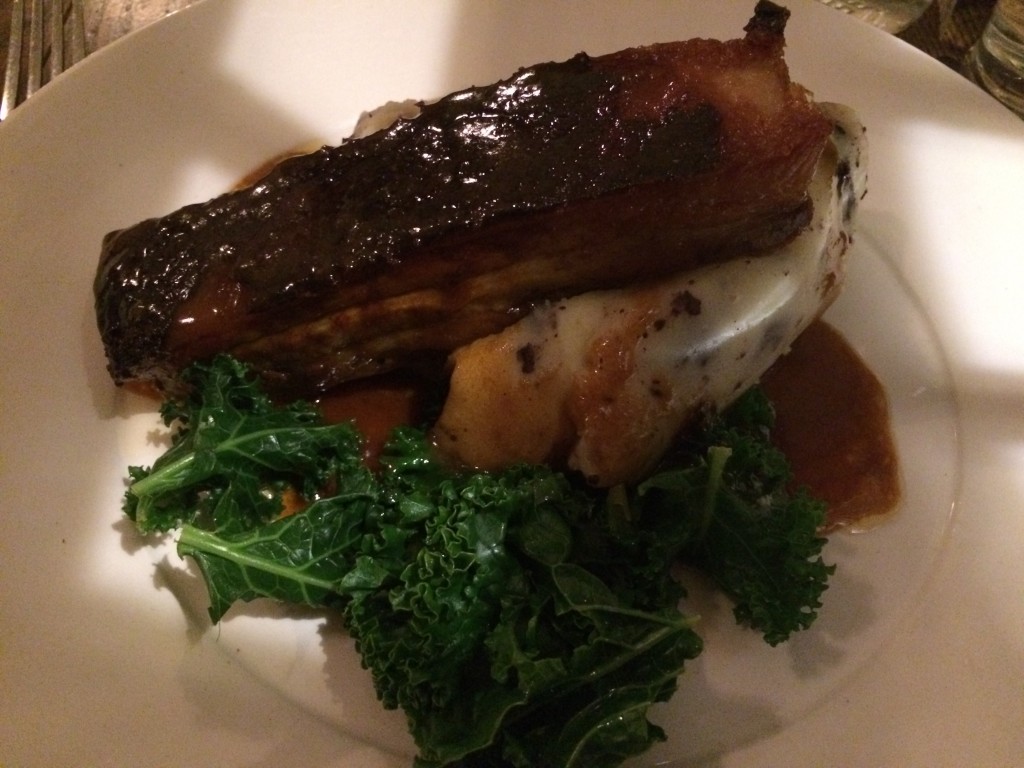 Andrew’s calves liver with bacon and mash seemed to have developed a crust, as if it had been sitting under the hot plate for a long time, so he didn’t eat much of his dinner either. Billy and Jo really enjoyed their steak and lamb respectively, so maybe we were just unlucky.

We then had to wait so long for the waitress to come back and clear our plates that we decided against pudding and went back to the cottage for a nightcap (half-pints of Baileys, Jo-style, although not for me obviously!).

On Thursday before our journey home we popped into another local cafe for breakfast, and had very tasty breakfast baps (I didn’t take the name of the cafe so can’t share that with you I am afraid, but look at everyone still looking jolly after 3 days eating and drinking to excess, thanks to Niasha’s photography skills): 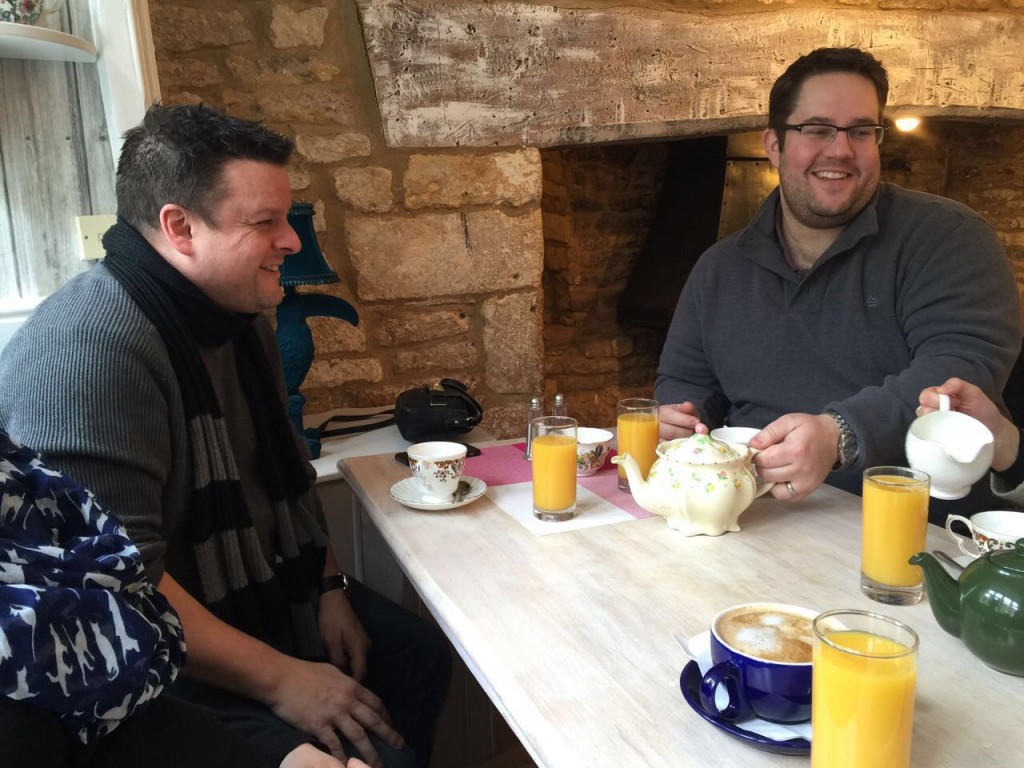 After a quick pit stop in Burford on the way home (another pretty but ultimately boring Cotswold village), we arrived back in London to cook a pie I had picked up from the lovely butcher in Burford, before we got ourselves ready for the excesses of Easter – how lucky we had all spent a few days preparing by stretching our stomachs. 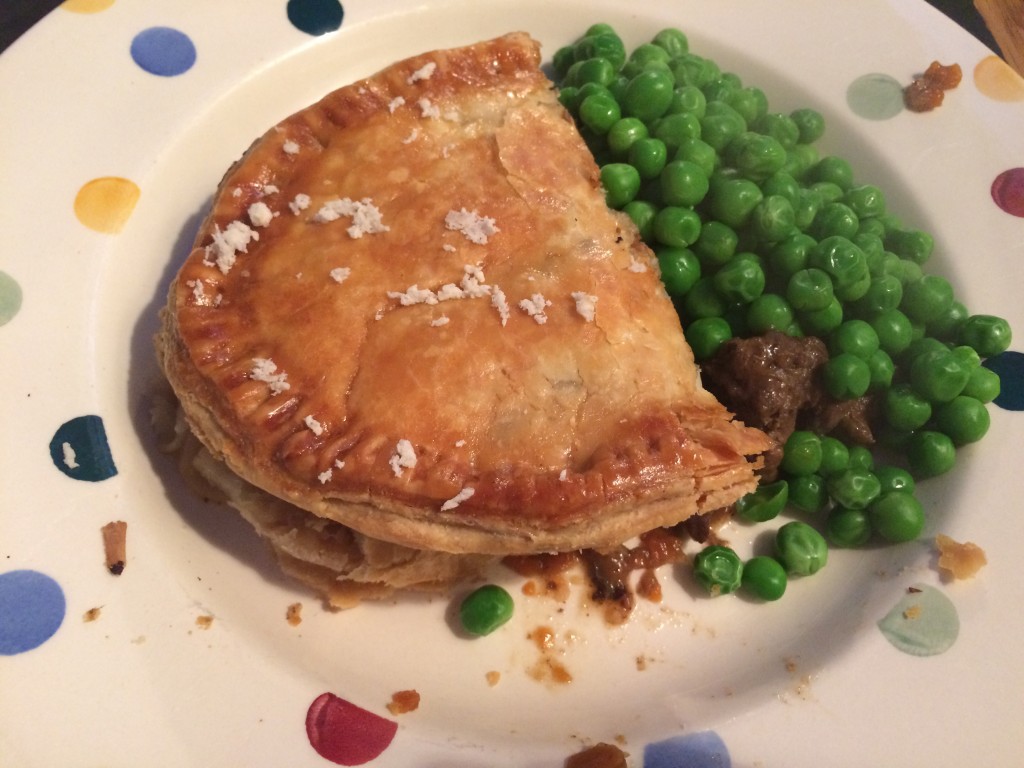 This week there’s not much to plan food-wise as I am off to Paris for a few days for work, but tonight we’re having sausages from our Burford butcher with leftover potatoes dauphinoise, and venison burgers tomorrow. I think from then on we need to calm things down and get on with some healthy eating now that spring is here, before my bumpy turns into more fat than baby. 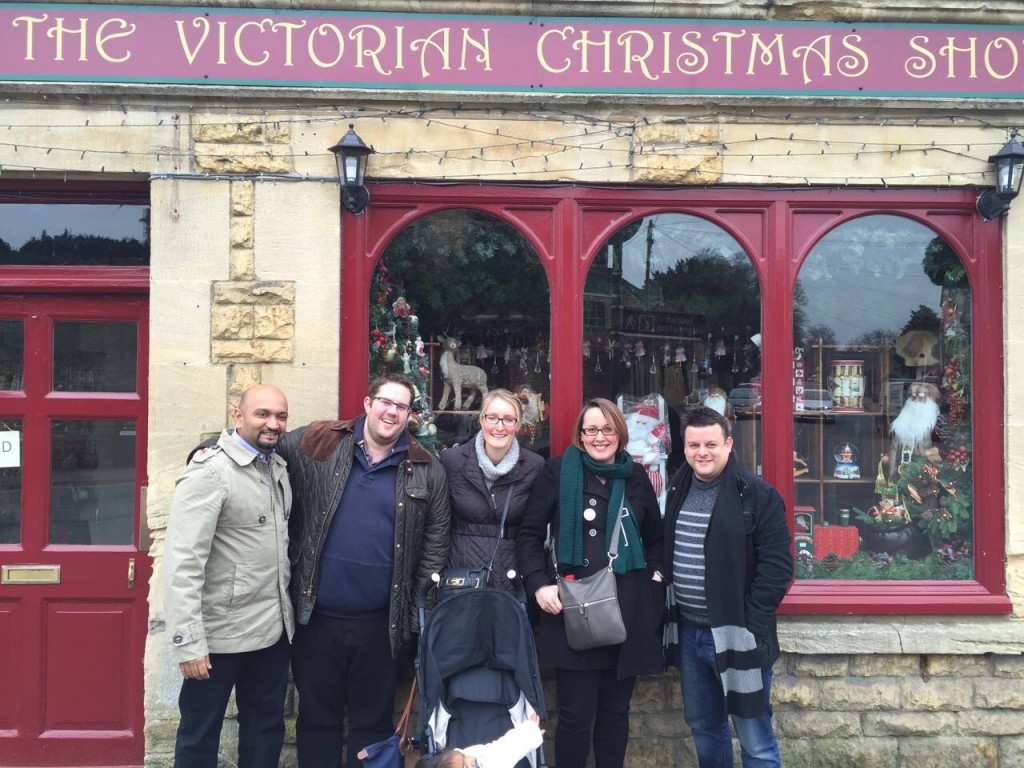