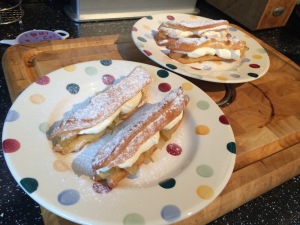 More apologies from me for getting behind on my Bake Off challenge for this year – seriously, the weeks are flying by, and I can’t believe it’s nearly Christmas!

In fact, I actually made my week seven challenge last weekend, but I haven’t had time to write about it yet. These challenges are getting seriously difficult now as well, so I can imagine I’ll start to fall even further behind as we progress towards the final.

For week seven, the bakers had to make pastry, and when I saw the trailer for the episode I immediately decided that I would like to try and recreate my favourite ever dessert from a restaurant: caramel apple eclairs from The Berners Tavern, a creation of Jason Atherton. Then I found the actual recipe for it on Jason’s website, and realised that I didn’t have the time or inclination to go through that level of effort! So what I did instead was make my own interpretation of a caramelised apple eclair, and even if I say so myself, it was rather brilliant! 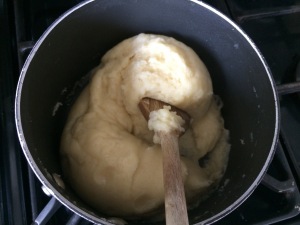 First of all I decided to tackle the choux pastry: although this is notoriously tricky to make I have always found it to be a doddle. I used Nigella Lawson’s recipe for profiteroles, but could have done with halving the mixture. I also discovered that I don’t have a nozzle for my piping bag which is big enough for piping eclairs, so had to make several lines of choux to make up one eclair. In fact, they were still on the small side when baked, but it worked! 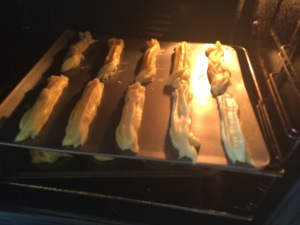 While the eclairs were baking I caramelised some apples, getting the idea from Jason Atherton’s recipe. I cored and thinly sliced some apples (didn’t bother peeling them, so I won’t be in line for a Michelin star anytime soon), and then boiled them in a small about of water with a couple of spoonfuls of brown sugar until they were tender and almost translucent. I left them to cool in the syrup and whisked some cream until I was ready to assemble my eclairs.

The assembly was simple – halve an eclair lengthways and lay some slices of apple along the bottom. Then top with whipped cream and put the other half of the pastry on top. Dust with icing sugar and serve. The eclairs are light and delicious, and a great alternative to your traditional chocolate eclair. 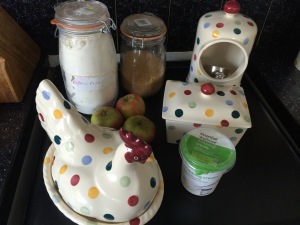 Make the eclair pastry first of all by melting the butter in the water over a medium heat. When the butter has melted, stir in the flour and salt with a wooden spoon until combined (if necessary, put the pan back on the heat to help the flour combine). Then slowly add the beaten eggs to the pan a little at a time, stirring the eggs into the dough quickly until it combines into a silky mixture. 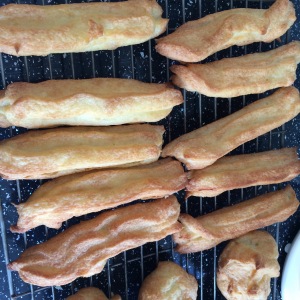 Put the choux mixture into a piping bag to make your eclairs – pipe them onto a lightly oiled or non stick baking tray. I made 10 using this method and had a lot of choux pastry left but no patience for continuing to pipe, so made the rest of the mixture into profiteroles to freeze! The eclairs should be baked at 200 degrees for around 15 minutes until crisp. When you remove the eclairs from the oven, cut a whole into the bottom of the eclair or profiterole to allow the steam to escape – this will stop the eclair becoming soggy. 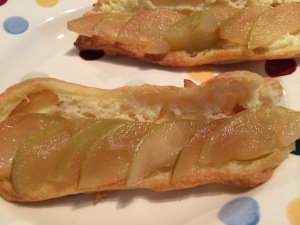 When the eclairs are cooling make the caramel apples by coring and slicing them, then put the apples in a pan and cover with water and add the sugar – put on a high heat and when the mixture comes to the boil, turn down the heat and simmer the apples for 5 minutes until the apples are tender. Allow them to cool in the syrup.

Assemble the eclairs as I explained above, and eat and enjoy!

Week eight of the Bake Off includes a doughnut challenge, so I hope to make some of those tomorrow. Honestly, this Bake Off challenge is really not very good for my diet! 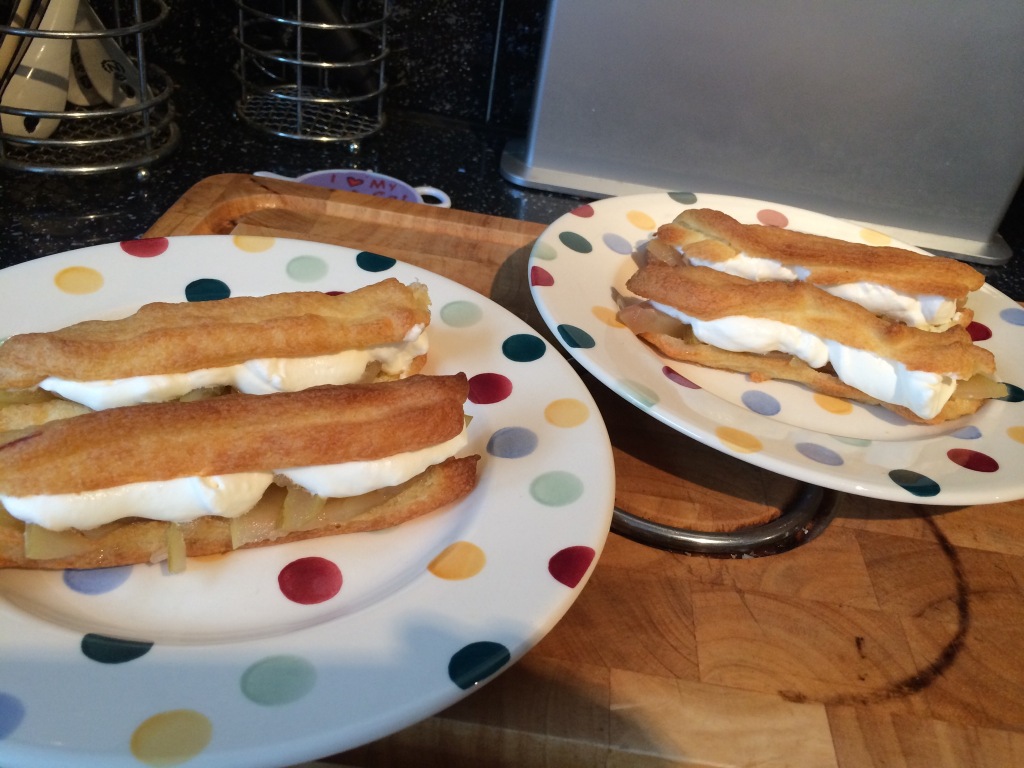