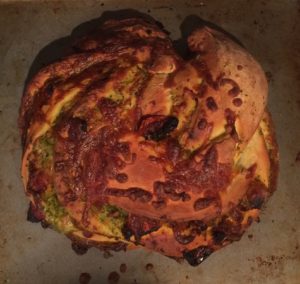 The latest edition of Bake Off involved delicious bread – possibly one of my favourite things ever, but sadly something which  makes me fat: because once I start eating the stuff I literally cannot stop. Mmmmmm, lovely bread.

Anyway, the options this week were chocolate bread, which sounds utterly amazing but there’s no way Andrew would eat chocolate flavoured bread and a whole loaf to myself would do my post-pregnancy body no favours; Dampfnudeln, which I quite like the idea of making until I saw the show and thought they looked bland, boring and difficult; and plaited loaves of bread as the showstopper.

The final option was the only suitable one really, as Andrew would eat it too. I looked online for various recipes and eventually decided to tweak this recipe for cheese and pesto whirls, made into a couronne (a sweet version of which I had made for a previous Bake Off challenge).

Here is what I did. 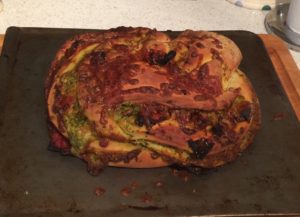 Firstly make the dough by mixing all of the ingredients together and then kneading the mixture for around 10 minutes until smooth. I did this in my KitchenAid freestanding mixer using the dough hook. Then lightly grease a bowl with olive oil and put the dough in the bowl, covered with clingfilm, in a warm place for around one to two hours until the dough has doubled in size.

Roll out the dough into a rough rectangle, making it around 1cm thick. If the dough has proven properly then it will be a real pain in the neck to roll as it will keep trying to spring back into a ball, but persevere. I find it a bit easier to roll and stretch the dough rather than just rely on a rolling pin. Eventually my piece of dough was approximately 20cm x 40cm in size and at that point I gave up, although it possibly should be thinner and larger. 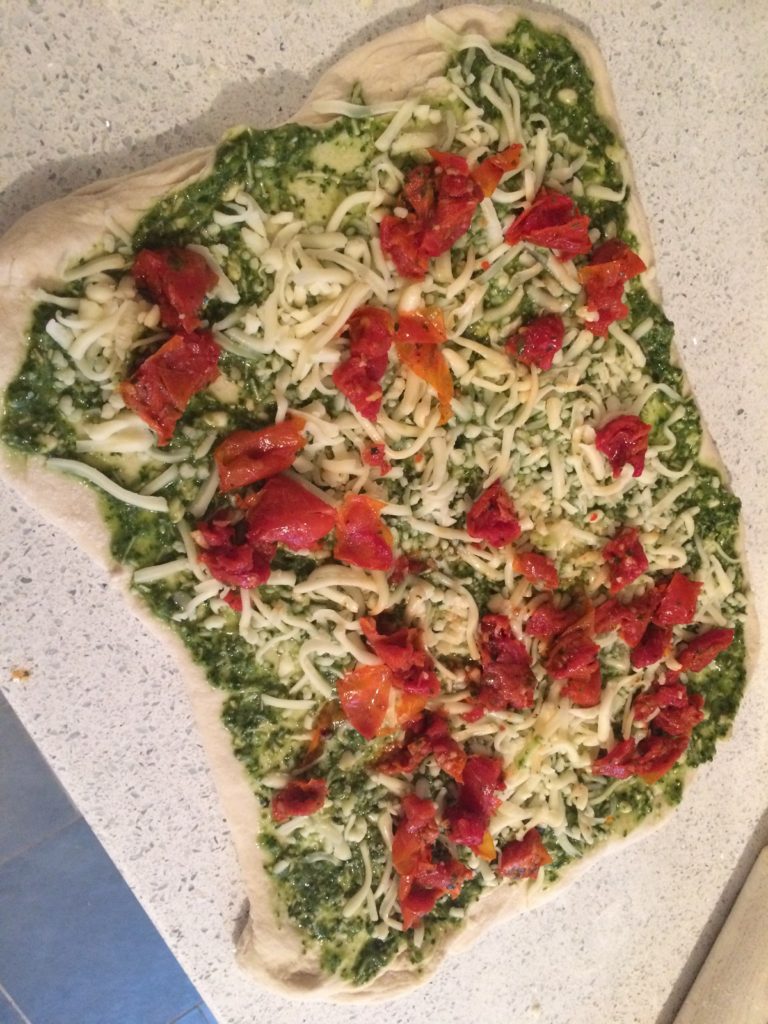 Spread the dough with the pesto – I have suggested 145g because that’s the size of the pot I bought from Waitrose, but it was a little bit much and some escaped from the dough when I was rolling it, so around 115g would be optimum, but what would you do with the rest of the pesto? If you have another potential use (freeze it?) then feel free to use less pesto.

Sprinkle grated mozzarella onto the dough next. I took the advice of the website and used pre-grated cheese. However, this is a fair bit more expensive than a ball of mozzarella so you may prefer to go with the ball and then drain it.

Next, chop up some semi-dried tomatoes and sprinkle them over the pesto, cheesy dough, and season with salt and pepper.

Now to create the couronne (which means a crown). Roll the filled dough into a long sausage, rolling the long end rather than the short end. Then cut the rolled dough in half lengthways (this is where it gets messy) and twist the two strands together, then coil into a circle (crown). Place on a greased baking tray, cover with clingfilm, and allow to prove again for another hour. 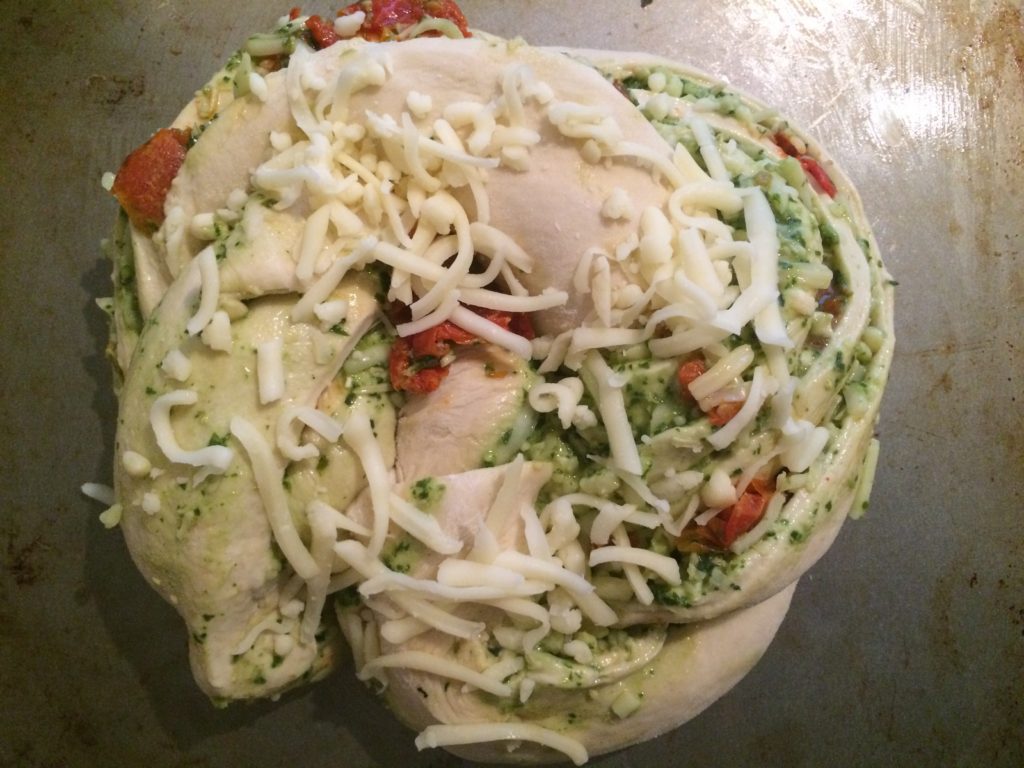 Bake the proved couronne at 180 degrees for around 35 minutes until golden, then allow to cool before serving. I would have eaten it warm but I ended up baking my loaf quite late in the evening, so we didn’t eat it until the following day. The olive oil in the dough keeps the loaf nice and moist, so I’d say it would keep for 4-5 days in an airtight container. 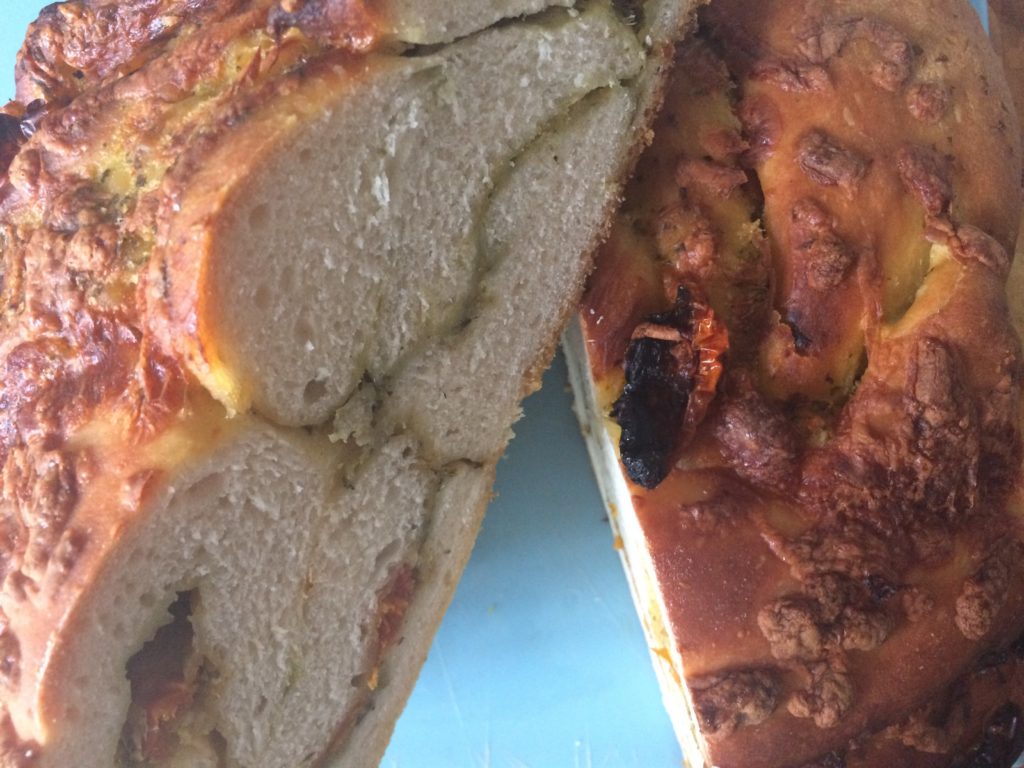 The next challenge for the Bake off is batter: yorkshire pudding, churros and pancakes. I am probably going to brave the deep fat frier and give churros a go, as even Andrew likes that.