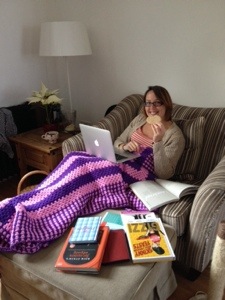 My mum’s birthday was on 9 February, which this year fell between me flying back from Sri Lanka and her flying out to Grand Canaria. As a consequence, we only saw eachother this week – although that worked out well as we had the chance to share our holiday experiences and for me to give her some birthday presents.

Normally I’d make her a birthday cake as well, but we only decided to meet up on the previous night, so I didn’t have time to make a cake, allow it to cool and decorate it (well, not if I wanted to sleep as well!). I didn’t fancy any of the cakes for sale in the supermarket, so I gave her the choice of two Nigella recipes I was keen to try: chocolate molten babycakes or syrup roly poly pudding.

I actually thought she’d plump for the roly poly pudding (which is what I wanted her to choose), as she does have a thing for golden syrup, but mum surprised me by choosing the molten chocolate babycakes. I suppose the idea of the roly poly pudding does sound odd – shortcrust pastry rolled up and drenched in cold milk and golden syrup, then baked in the oven. Sounds like a recipe for disaster, although I have been told by friends that it is delicious. Maybe next time …

So onto the babycakes. They are one of those recipes for which you will probably have all the ingredients in the house (except maybe the chocolate – if I had 350g of chocolate in our house I would have eaten it to be honest). They are a perfect after-work pudding because they just take 10 minutes (max) to make, and 10-12 minutes to cook.

I did tweak Nigella’s recipe slightly as I am really not a fan of dark chocolate, and when I have stuck to her quantities of the dark stuff I have found the dishes too bitter (profiteroles especially need milk chocolate in my view), so I used 200g milk chocolate and 150g dark chocolate, which suited me better (I’d go for all milk next time to be honest).

Mum acted as my sous-chef (slave) and so I had her doing all the jobs which required more than minimal effort – I weighed out the butter and sugar while she broke up the chocolate; I supervised the melting of the chocolate while she creamed the butter and the sugar; I weighed out the flour while she added the eggs, etc. That way, if anything went wrong, I would be able to blame her. What a birthday treat eh?!

And it did go wrong, but luckily it ended up alright: Nigella instructs you to add the melted but cooled chocolate to the cake batter as a final stage –  mix it all together and then pour into buttered ramekins and bake. I don’t know if my kitchen is exceptionally cold (maybe, it does have a bloody great hole in the ceiling at the moment), but as soon as we (by which I mean she) poured the chocolate into the cake mix, it solidified and we (she) ended up having to try and combine a solid 350g lump of melted chocolate with a stiff cake mix! So it turned into a kind of chocolate chip cake mix, and I was frankly dubious about whether it would turn into the chocolate fondant / puddings of Nigella’s recipe.

We left the ramekins on the side (no need to store them in the fridge in my ice box style kitchen!) whilst I finished preparing the stirfry (see, I wasn’t being completely idle) and then popped the babycakes in the oven when we had finished dinner.  I left them to cook for 12 minutes as Nigella says in her recipe they will need that amount of time if cold, and then served them out of the ramekin (messy, they kind of fell apart when I took them out) with clotted cream ice cream.

Yummy yummy, that’s what I say. They certainly were molten inside – I am not sure whether they should have been cooked for a little longer as they were very liquid in the middle, but they did taste cooked anyway. Maybe you would want to cook them for longer if they were to be served to a pregnant lady.

We had one each and shared the spare four between us to have for the subsequent two nights for pudding (I am greedy, but even I could only manage one at a time!). I re-heated mine in the microwave for 45 seconds and the insides went gorgeously gooey again, so you could easily get away with cooking them in advance.

Here’s how I made them.

Pre-heat your oven to 200 degrees. Butter 6 ramekins or pudding dishes and place them on a baking tray. I read on Nigella’s website afterwards that some people buttered and floured the ramekins to stop the puddings sticking – I’ll try that next time as they were a bugger to get out. Melt the chocolate (it took about 2 minutes in a microwave for mine to melt but I had to stir it a few times to make sure it wouldn’t burn). Cream together the butter and the sugar and then add the eggs one at a time to combine, along with a pinch of salt. Stir in the flour and vanilla extract and then add the melted chocolate to the mix. Do not be alarmed if everything looks a terrible mess and the chocolate doesn’t combine with the batter, as it all seems to sort itself out in the oven. Divide the mixture equally between the ramekins and cook for 12 minutes if fridge / winter kitchen cold. Or maybe a teeny bit longer if you are feeling brave – I might try another minute or two just to set the inside a little more … although maybe it’s not worth risking it, as a solid chocolate ‘fondant’ would surely be as big a disappointment as an egg with a hard yolk. Hmmm, let me know how you get on with that if you are braver than me …

Once out of the oven, turn out of the ramekin and serve immediately with vanilla ice cream or a good slosh of double cream. I think custard would be too sweet to have with it, but you definitely need something to temper the chocolatey-ness – otherwise it would stick to the sides of your throat and drown you in chocolate goo (although I am sure there are worse ways to go …). Enjoy!

Apologies for the lack of photos of the pudding, but I really thought it was going to turn into a total disaster and so didn’t bother taking any pictures – so instead you get a lovely one of me writing this post!