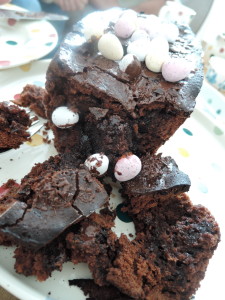 I am a bit late posting up my plans for this week … mainly due to my first kitchen disaster: a bout of food poisoning.

As much as I hate to blame my own culinary skills for anything, I fear that a night of intense sickness during the early hours of Sunday morning – from which I am still recovering – was caused by a batch of puy lentils which I cooked on Wednesday and reheated on Saturday night.

When I say reheated, I mean warmed in the microwave and then ate, despite finding parts of the lentils (which I had cooked with carrots, onions, spinach and tomatoes) were still cold. It didn’t even cross my mind that there would be a problem with this, but a few hours later I woke up feeling dodgy, and spent the rest of the early hours losing my stomach contents along with that contentious hour as we moved to British Summer Time.

Due to the lack of sleep and general dodgy feeling I haven’t been at work today either, but I am hopeful that those evil lentils are out of my system now and I am on the road to recovery. 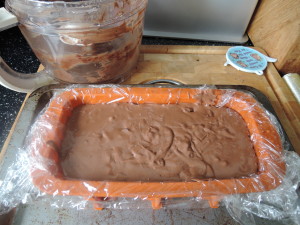 Kitchen disaster two happened when I made Nigella’s quadruple chocolate loaf cake. This link, it turns out, differs from the recipe in her book Feast, the latter being the one I followed. “Line your cake tin with clingfilm” advises Nigella, adding “don’t worry, it won’t melt!”. Hmmmmm. So I took Nigella’s advice and lined the tin with ‘all-purpose clingfilm’ (not reading until later on the packaging that it should not be used in a conventional oven), and guess what happened? Yes, it melted. I blame Nigella and Waitrose, as ‘all-purpose clingfilm’ is clearly not all-purpose when you can’t even put it in the oven.

The cake was for Andrew’s aunt’s birthday (she’s a chocoholic so I thought it would be perfect), and she chose to trim the outside and eat the rest of the cake anyway (thanks to the helpful advice of Facebook). It has the texture of a chocolate pudding and I imagine it would be lovely with cream or custard … just make sure you line the tin with foil or use a silicone loaf dish instead of ‘all-purpose clingfilm’. Hah! 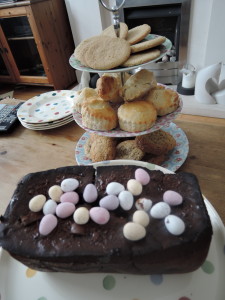 And this was on top of another kitchen nightmare which involves our boiler (with which we have long-running problems). In a nutshell it needs to be replaced, so we’re going to relocate it to the other side of the kitchen (as it should be on an outside wall, unlike now). Unfortunately the outside wall currently hosts my bespoke built in shelves and cupboards, so some element of destruction will ensue.

AND our dishwasher has broken so I am having to wash up by hand. It is depressing.

Anyway, enough whining – back to this week: I was due to meet friends tonight and tomorrow night, but due to lentil-gate I have cancelled those meet ups (no need to tempt fate by eating out when I am not feeling 100%). I also postponed my Cookbook Challenge until next weekend. So the plan for this week is hopefully going to be as follows:

I haven’t decided what we’re going to eat over Easter weekend, although I need to catch up on the Cookbook Challenge and Andrew has picked ‘The Family Meal’ El Bulli cookbook by Ferran Adria (thanks for that Andrew!). I also have a piece of salt marsh lamb in the freezer from our recent trip to Ally Pally farmer’s market, so I think that will be a good one for the weekend. It will depend on what we are up to during the day as to what makes it onto our dinner plate each night though.

And of course, I am fully expecting a Cocoa Loco Easter egg from Andrew to help me on the road to recovery and build up my strength after lentil-gate!

What plans do you have for Easter weekend?