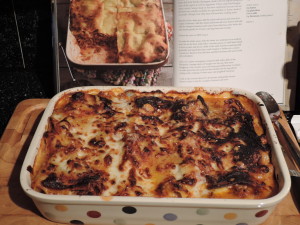 Who doesn’t love lasagne eh? Most home cooks will have their own version, whether it’s made using a jar of sauce (which is how I first started making mine years ago, and I used to love eating the white sauce out of the jar with a spoon!), or a skinny version with leeks instead of lasagne sheets (I have never tried it). My own version always uses my standard bolognaise sauce which is made with minced beef, tinned tomatoes, onions, garlic, oxo cube, oregano, peppers and occasionally some carrot grated in to sweeten it up. The white  sauce is full of cheddar cheese, and the lasagne sheets are usually dried although I have used fresh ones in the past (that particular lasagne went a bit stodgy). 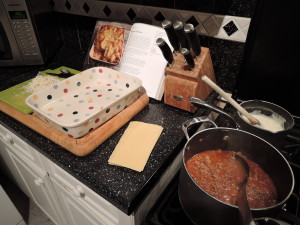 It’s so easy to prepare a dish of lasagne in advance and re-heat it, and so filling – full of dippy goodness! So when Andrew chose the Two Greedy Italians cookbook for the latest Cookbook Challenge, I picked the lasagne option for several reasons: 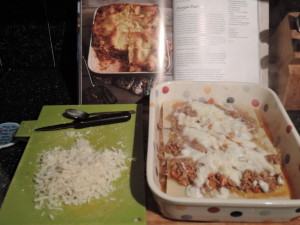 In this case, the Italians in question are Antonio Carluccio and Gennaro Contaldo. I have several cookbooks of theirs individually, and enjoyed their TV show where they explored Italy together. I decided not to hold it against Gennaro that I had eaten one of the most disappointing Italian meals at his (hugely expensive) restaurant in Soho a couple of years ago, where the particular lowlight was a rubbery panna cotta.

Their recipe could not be more simple: a combination of minced pork and beef fried with onion, carrot, and a tin of tomatoes. Cook for several hours. A white sauce made with barely any cheese, layered with pasta and baked. Hey presto (is that Italian?) it’s done. 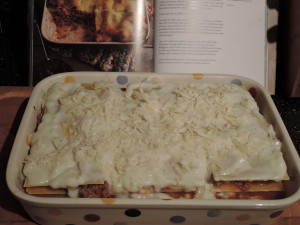 This recipe made for a light lasagne: the sauce was quite liquid, as you are instructed to cook it with the lid on for 2 hours (I would have reduced the sauce down so it was sticky instead of runny if I hadn’t been following their recipe). The white sauce has a mere 20g parmesan in it, and is layered directly on top of the meat sauce. I usually sandwich my cheese sauce within lasagne sheets, alternating this with meat sauce between lasagne sheets, so I found that a bit strange but did as I was told.

Overall Andrew and I agreed that the lasagne was delicious and tasted authentic, but we like my one a lot as well, so I am not sure we’d bother doing this again. I think instead I’ll take some tips from the Greedy Italians’ version, such as not separating the layers of cheese by lasagne, and using less cheese than I usually do. I didn’t feel any difference in taste from the mixture of pork and beef mince, so I don’t really get the point of that, but I would do it again if I found some pork mince on special offer.

Here’s how I made the lasagne. 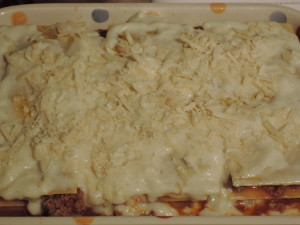 Heat the olive oil in a saucepan. Chop the onion and carrot into fine dice and sautee lightly until the onion is translucent, then add the minced meat and stir it around until it has browned. Then add the tinned tomatoes, and fill the tin with water and add that to the mixture too. Put a lid on the saucepan and simmer your meat sauce for two hours, stirring occasionally to stop the mixture sticking to the bottom of the pan. Taste and season.

Make the white sauce while the meat sauce is cooking: melt the butter in a small saucepan then add the flour to it, making a paste. Slowly add the milk, stirring with a wooden spoon and making sure the liquid is combined with the buttery paste before adding any more milk. Once all the milk has been added and you have a smooth sauce, add 20g of cheese and plenty of black pepper to the mixture and set it aside until assembly time.

When the meat sauce has simmered for 2 hours, preheat your oven to 200 degrees. Put a little of the meat sauce into a baking dish and top with lasagne sheets (for me each layer took 3 sheets of dried lasagne). Then top that sheet of lasagne with more meat sauce, a drizzle of cheese sauce, and a lightly sprinkling of cheese. Then top with lasagne sheets and repeat. Keep the majority of the white sauce and grated cheese for the top layer, so you finish with white sauce and grated cheese. My lasagne had 4 layers of pasta, but this will depend on the size of the dish you use.

Bake your lasagne in the oven for around 35-40 minutes until golden (mine was probably a little more golden than it should have been, but I love it when the top layer of pasta is crispy!), and take out of the oven for 10 minutes to rest before dishing up a big slab for dinner.

I served my lasagne with garlic bread, but it would be lovely with a green salad as well.

How do you make your lasagne? 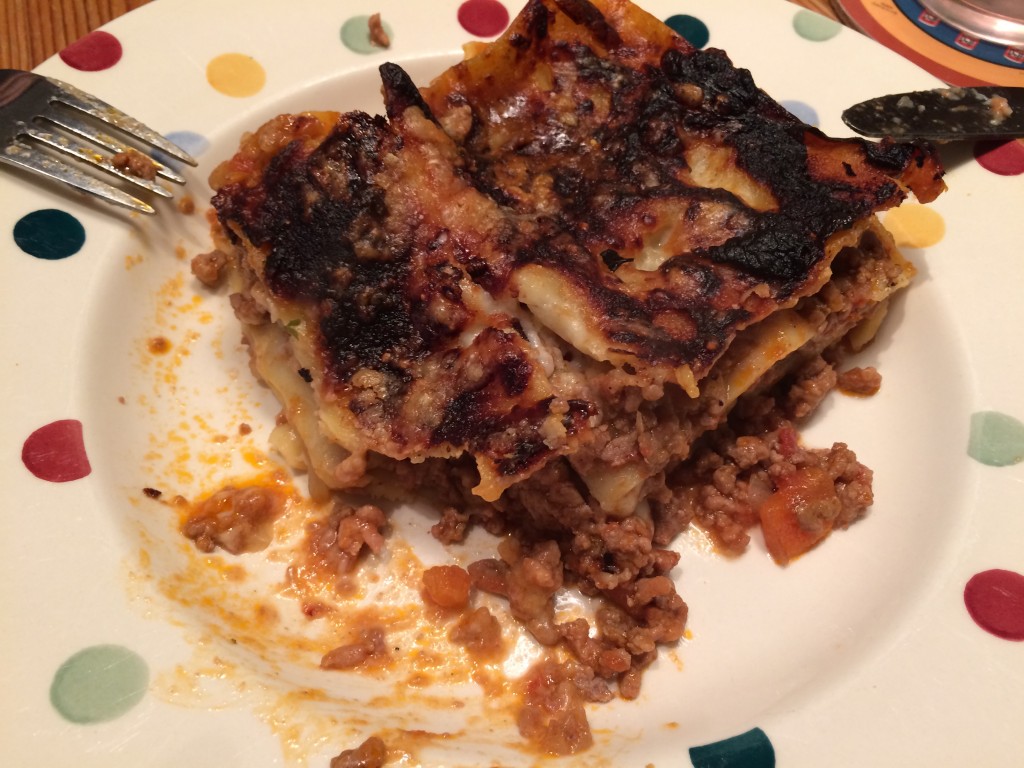