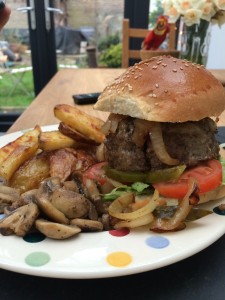 The amount of times Andrew has cooked for me during our 20 year relationship could probably be counted on two hands until recently. Since the kitchen renovation was finished, and my pregnancy combined with long hours at work has left me exhausted, he’s been keen to help out by cooking dinner a couple of times a week.

Having never really cooked, he hasn’t suddenly turned into some kind of Escoffier in the kitchen, but he’s actually cooking rather than just heating up frozen pizzas. That does mean he needs me on hand to oversee certain aspects of the preparation (how small does this have to be chopped? how long do I have to cook this for? is it cooked? etc), and he is a stereotypical man in terms of how many chopping boards and knives he uses, and how much mess he makes. 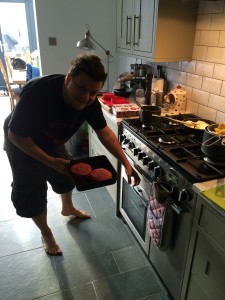 Last week we had to make a boring shopping trip to Wilkos to buy a new curtain rail, and he discovered a JML Juicy Lucy burger maker in there, which he immediately purchased, telling me to buy some nice mince so he could make us these burgers at the weekend.

For those of you who haven’t heard of a Juicy Lucy  burger before, it’s a stuffed burger. Apparently invented in the States (where else?) our new little gadget would enable us to create the base of the burger with steak mince, create a hole for the stuffing, and then encase the stuffing with more beef. Of course this could easily be done by hand rather than with a £10 plastic mold, but I didn’t want to dampen Andrew’s culinary enthusiasm so we went for it.

I decided on a plain cheese stuffed burger for mine, and Andrew chose to stuff his with both cheese and chorizo. Alongside the steak mince for the burgers, and Monterey Jack cheese, I bought some lovely brioche buns from Waitrose (these are fantastic – buttery and soft, but not too sweet), gherkin pickles, onions to fry, mushrooms for Andrew, and potatoes to make some homemade chips.

While Andrew constructed the burgers, I made the oven-baked chips and prepared the accompaniments. 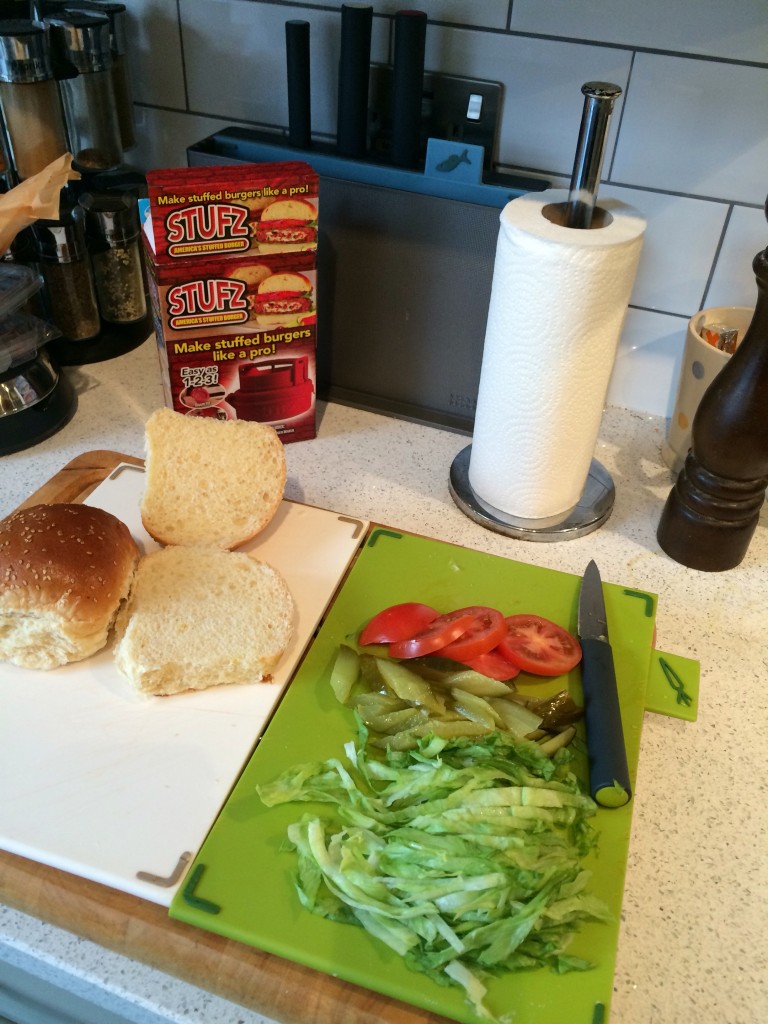 Firstly he packed the base with mince: 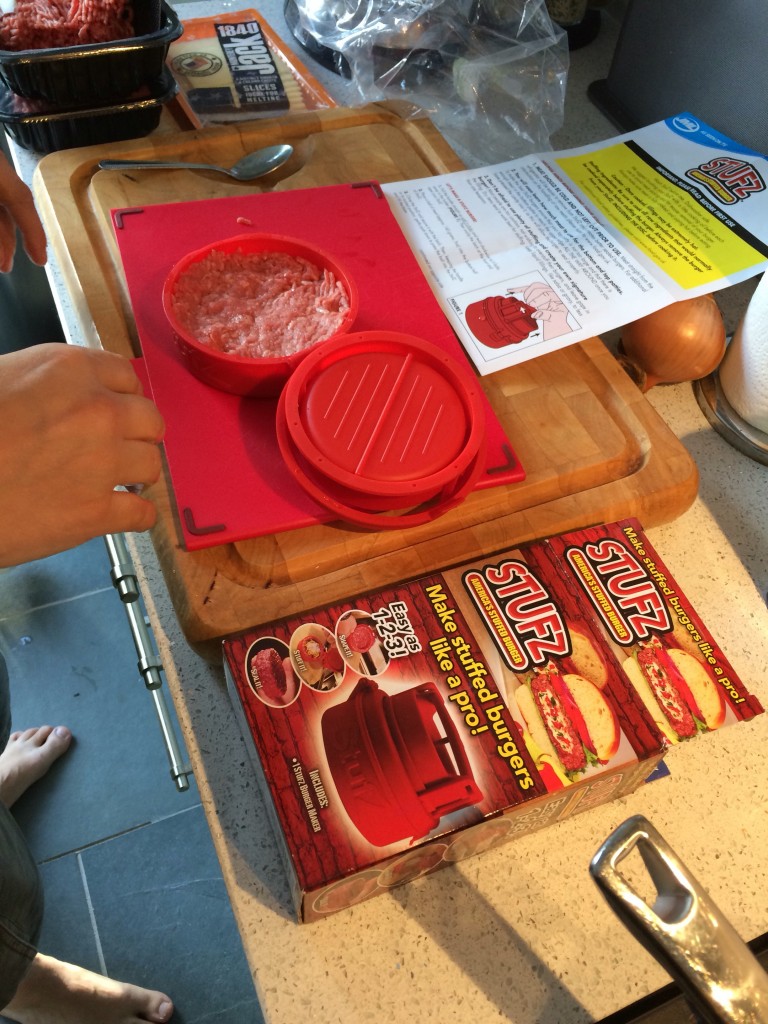 Then made the cavity: 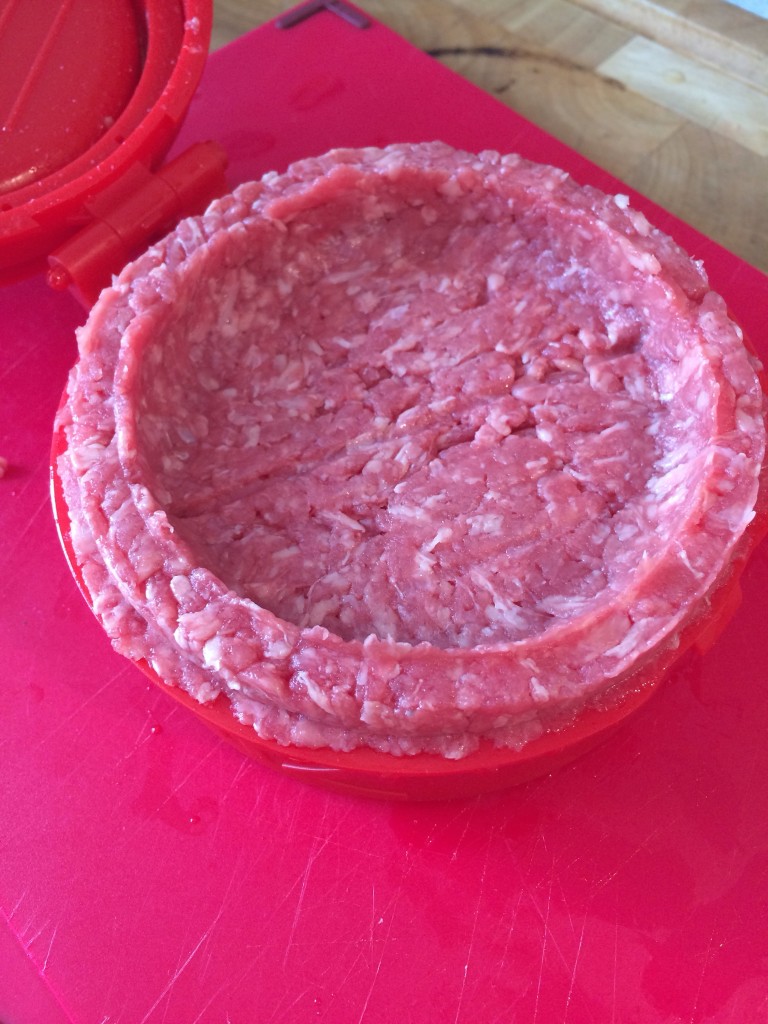 And filled the cavity: 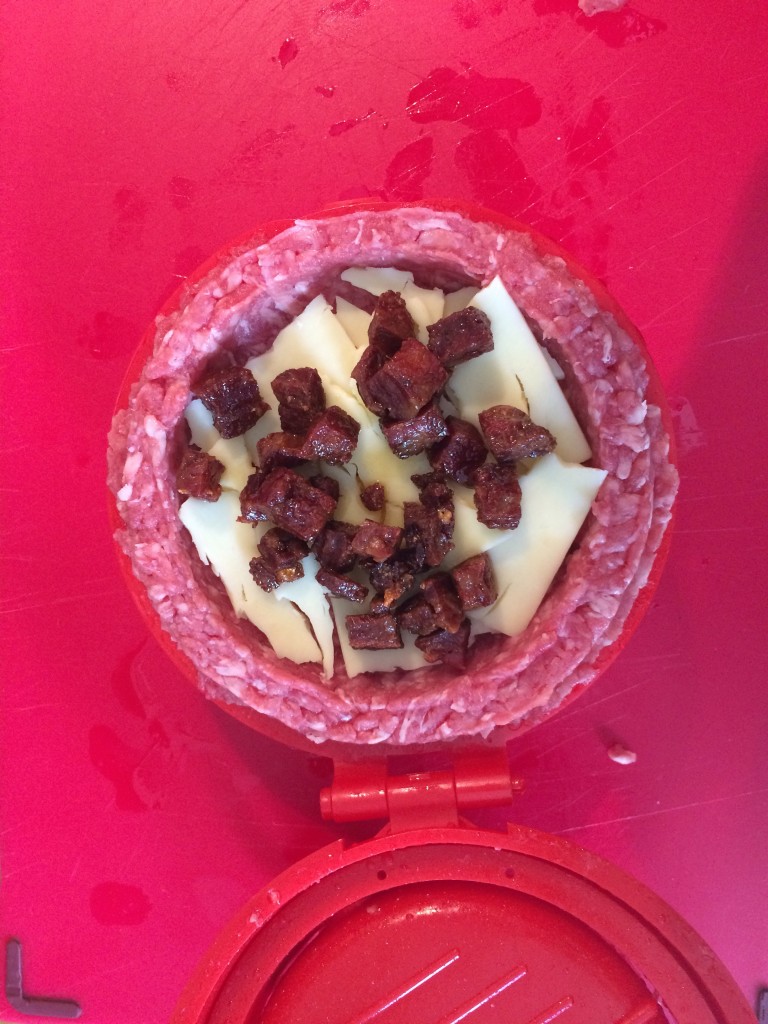 Then sealed with more beef: 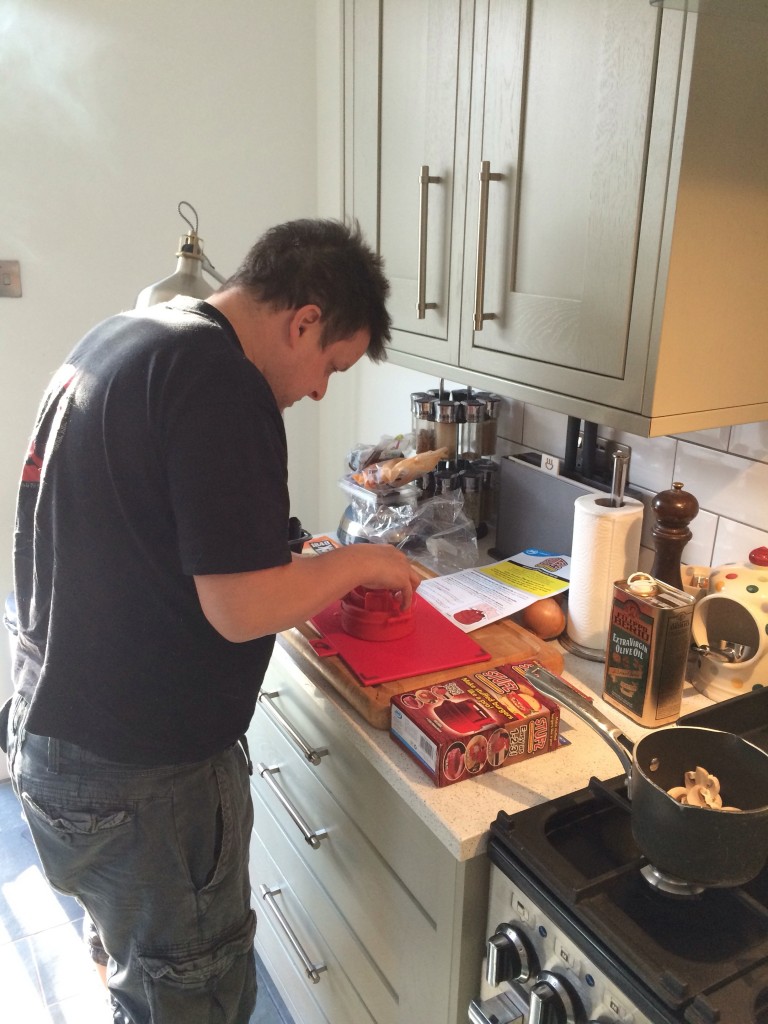 And what did we have? The world’s biggest burger! 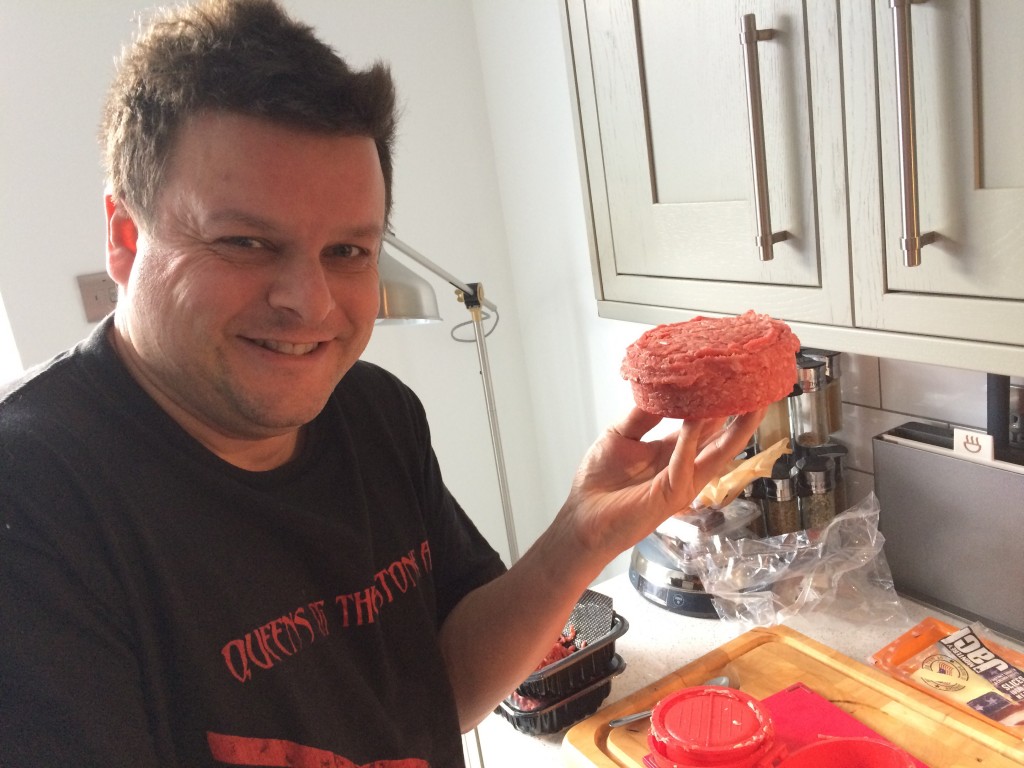 We decided to bake the burgers to make our lives easier (especially as the oven was already on to bake the chips) and the burgers took around 30 minutes to cook through, although we lost most of the cheese filling during the process which was a shame.

As if the burger wasn’t already big enough, once packed into the bun with fried onions, shredded lettuce, sliced tomato, gherkin and relish, the burger was HUGE, and Andrew had a hard time biting into his (I used a knife and fork!). 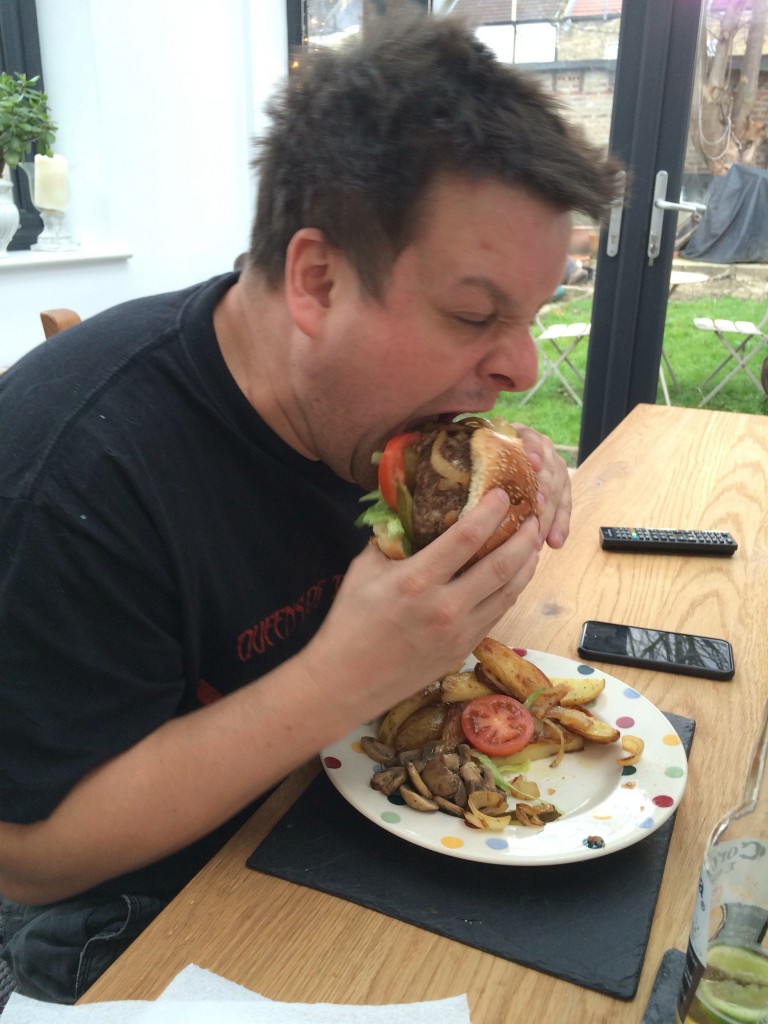 Although the burger was delicious, as part of a meal it was just too much to eat (each burger was probably constructed with around 200g of beef!), and we couldn’t finish them. Next time we’ll have to bear that in mind and make them smaller, but well done to Andrew for making us burgers from scratch.

Next on the list for him to make is steamed dimsum! If burgers are your thing then here are some more from my fellow food bloggers: 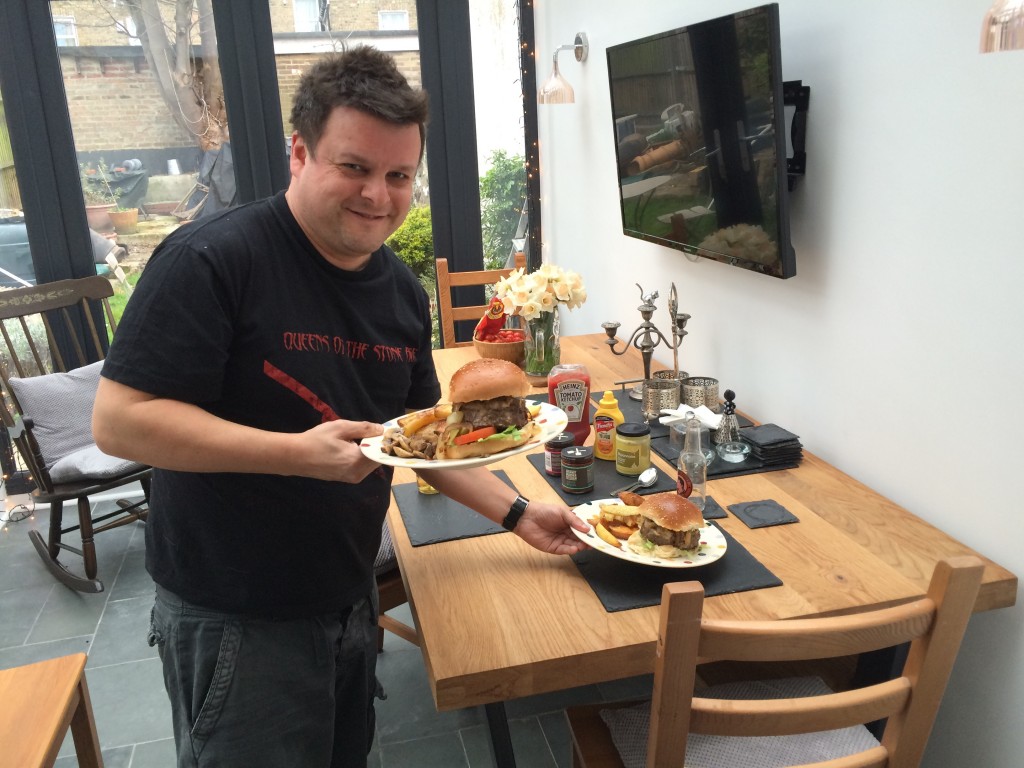