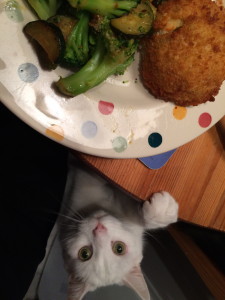 The best thing I can say about the ferrero rocher is that they are gone. Admittedly in my tummy and not in the bin, but they’re not singing to me any more. Mmmmm, they were delicious though. Note to self: don’t buy anything made with Nutella until I have learnt self control.

As you can see from the picture on the left though, I am not the only greedy one in our house. Check out little Alfie who is obsessed with fish. He was begging for a bit of one of my fishcakes, but I am afraid I didn’t let him have even a teeny morsel – it was all for me! I served the fishcake with courgette sauteed with garlic and some boiled broccoli, my Friday night meal was delicious (although Alfie never found out how delicious it was, despite the adorable face). 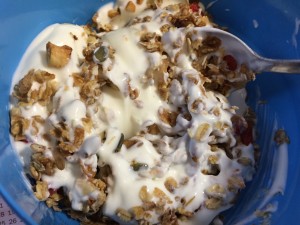 Anyway, let’s forget about the Ferrero Rocher and move on: if you haven’t tried to make the granola I posted last week then do – it’s amazing stuff. I think I should be eating less of it than I am: I have a feeling it’s supposed to be sprinkled on top of yoghurt rather than appear as the main constituent of my breakfast bowl, but I don’t care – it tastes good. It keeps me full until 1pm even after a gym session, so a winner all-round. Please, make it.

This week is a tough one for planning, as I’ll be working from our Paris office on Monday and Tuesday this week. That’s no bad thing – I mean, who can complain about spending a couple of days eating in Paris? I’ll be at the mercy of Eurostar for breakfast on Monday, but will be meeting my lovely friend Sophie for dinner on Monday night, which I am really looking forward to (Andrew will have leftover Vietnamese Pho for his dinner). On Tuesday I’ll probably have lunch in our office (which is pretty good actually – as you might expect from a French company) and  then it’s the Eurostar for dinner on Tuesday night (unless it’s really disgusting, in which case I’ll settle for some toast at home … and I have bought Andrew a Pieminister pie for dinner – trying to upgrade him from the dirty Fray Bentos ones he adores). 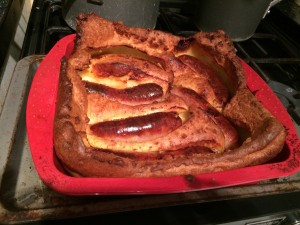 On Wednesday I have invited my French friends to dinner, and so am going for a potentially risky menu: toad in the hole. If I chicken out of making it for them, I might go for sausages and mash instead. Pudding to be confirmed – I need something light and simple after a heavy dinner, but it has to be typically British – if you have any ideas then let me know. It needs to be quick and easy to make as I can’t prepare it in advance either – and ideally without chocolate because of fuss-pot Andrew. Help! I do have loads of Pink Lady apples in the house at the moment as they were on special offer this week – does that provide some inspiration?

I have received lots of suggestions via my Facebook page, including rice pudding, lemon posset, crumble (apple, strawberry and almond), bread and butter pudding, apricot brioche pudding, spotted dick and trifle. It’s great to have so many cooking tips at my fingertips!

On Thursday I’ll have chicken curry, as I didn’t make it last week (on the day in question we both had big lunches and so ended up having beans on toast for dinner, which is sometimes exactly what you need – especially when it’s made with big doorstep slices of fresh white bread from the Turkish bakery), and on Friday I am going to do one of our favourite meal combinations: smoked fish on a bed of spinach with a poached egg and a little hollandaise sauce. That’s a celebratory start to our 19th anniversary weekend! 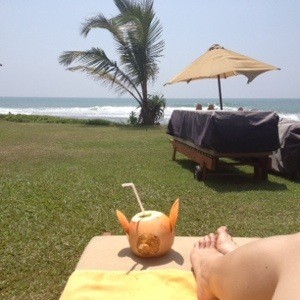 We always celebrate our anniversary with a meal out (except last year, as we were flying in to Sri Lanka – one of my favourite pictures from Galle is on the right) but we haven’t decided where to go yet. It will depend on whether we end up having a day out of London – which will in itself depend on the weather! January in the UK will never be predictable …

And of course the following Monday 26th is Burns Night, so haggis, neeps and tatties has to be on the menu at some point. If you don’t know what that is, you can read about my Burns night menu from last year.

For this week’s Cookbook Challenge, Andrew has chosen ‘Flavours of Wales’, and is trying to encourage me to make faggots. I love them, but I am not sure I fancy mucking around making them with all that offal. Especially when we’ll be having haggis on Monday for Burns Night – something lighter is probably in order.

Any nice food plans for you this week? And don’t forget, any ideas for pudding on Wednesday night would be much appreciated. Cheers!