I know it’s hard to believe as I look so incredibly youthful (joke), but Andrew and I have now been going out for 25 years. The anniversary is today (25 January, also Welsh Valentine’s Day, coincidentally), and I do have a very special anniversary meal I will be cooking tonight (I’ll tell you about it next week, but let’s just say that it will more than make up for the fact that we aren’t celebrating in New York City, as once wished. 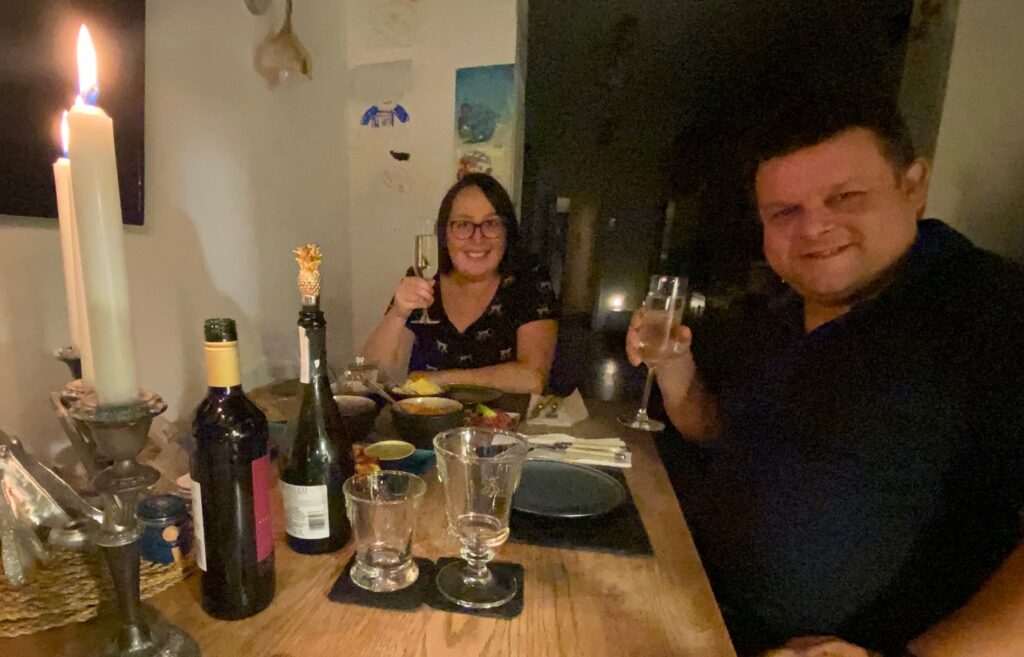 We took the long weekend off work, and despite our offices currently being in our houses, it has felt like a break, and a much needed one at that. Of course we haven’t been able to do much (although the snow has been extremely welcome as a distraction for both boys in the household!). 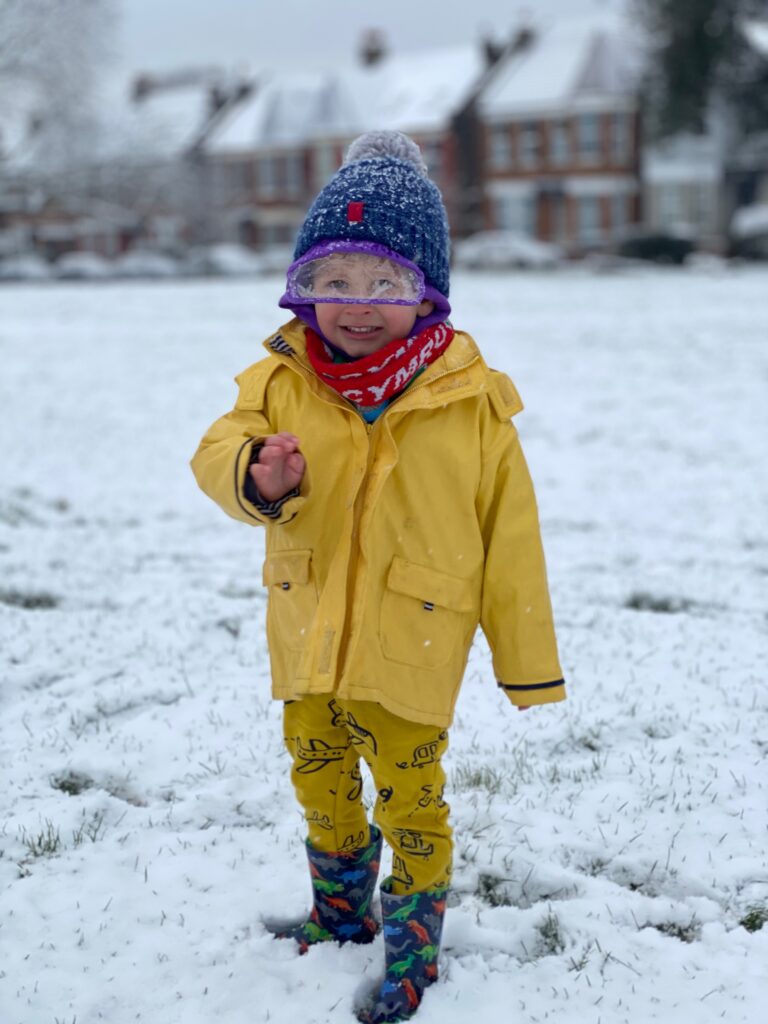 But, we did manage to get Ioan off to bed early on Friday so we could enjoy a special food delivery from Kanishka in Mayfair. 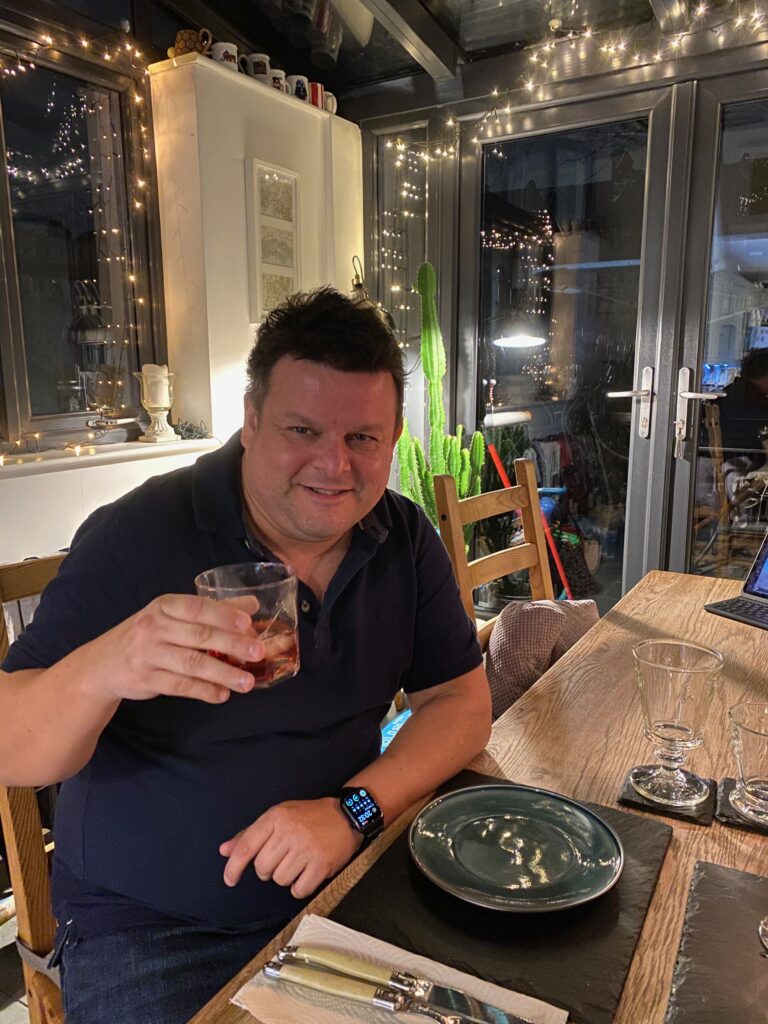 Andrew and I have been a fan of Atul Kochhar for many years, and went to his first restaurant, Benares, for an absolutely wonderful meal many years ago. It was one of our first taster menus where we had the wine pairings included (I would be clueless which wine to drink with curry), and the drinks came so thick and fast that we got very giggly and tipsy very quickly. But in the alcohol haze I still remember an amazing meal.

Andrew has subsequently been to Atul’s newest London restaurant Kanishka, which he has raved about. It’s one of the few fancy restaurants we have found which delivers cooked food to private homes, and whilst I have loved our ‘At home’ boxes from restaurants, Andrew wanted me to enjoy the meal without the hassle of cooking it. So we booked Kanishka a couple of weeks ago (by email, and then one of their friendly staff calls to take payment details and confirm the order and delivery time of choice), and waited eagerly for our Indian banquet. 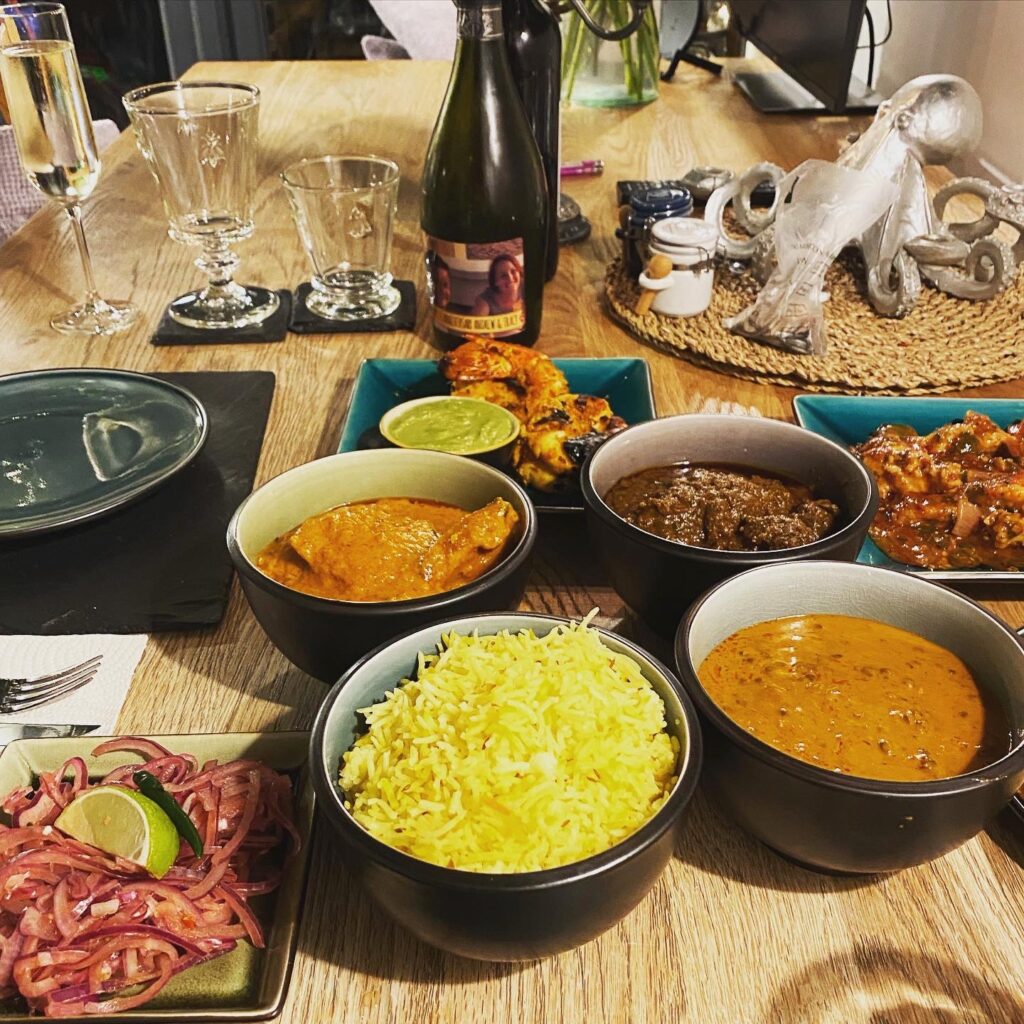 We chose an Atul Kochhar bundle, which included tandoori prawns, chilli chicken, railway goat chicken, chicken tikka masala, paratha, saffron rice, raita, onion salad, black daal, gajjar halwa and Gulab Jamun. We also chose a drinks package which included house wine, cocktails and poppadoms and chutneys. In total that came to £130, which is not cheap, but less than we would spend for a special anniversary meal in a restaurant, and worth it for us to make a lockdown special occasion feel … well … special. 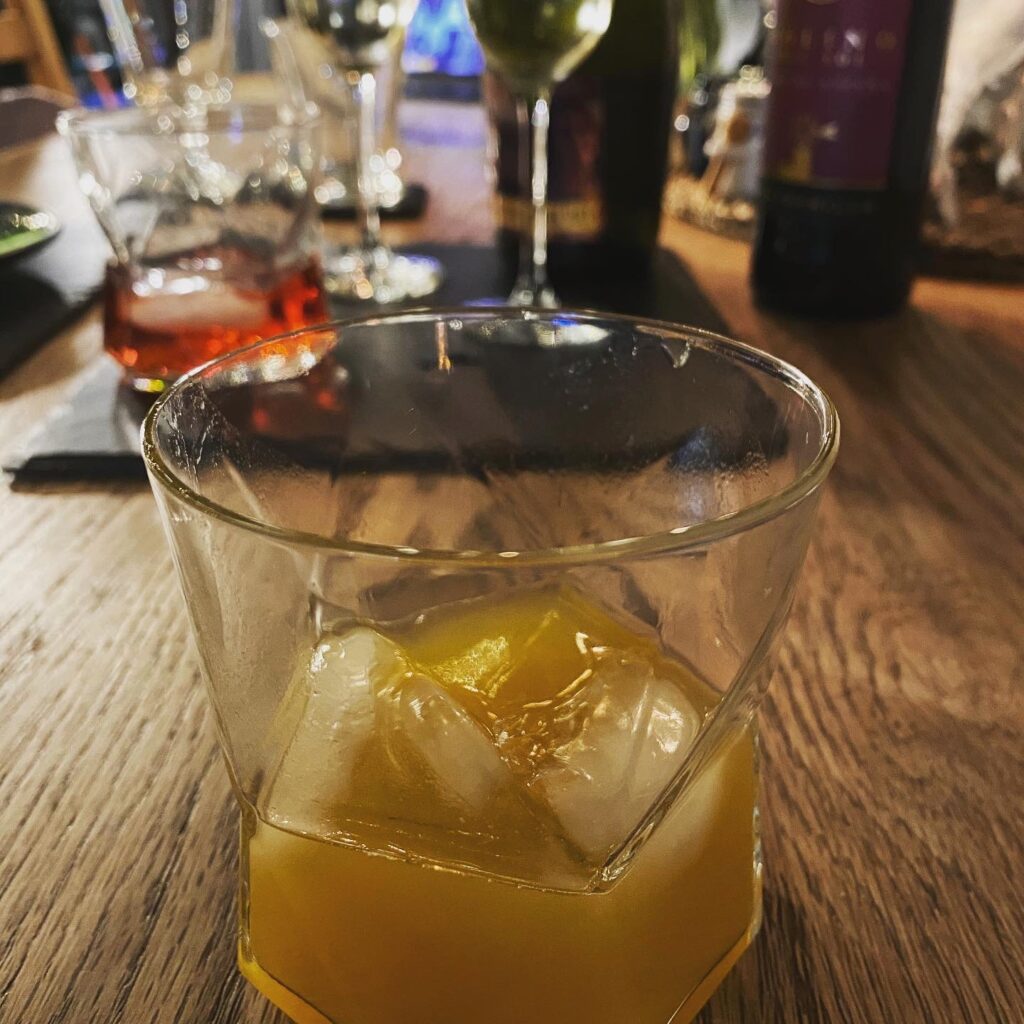 When you see tandoori prawns on the menu, you might think you would get a few tiger prawns. Well, no, we only had one prawn each, but each was seriously gigantic. Practically the size of my clenched fist, deliciously sweet and spicy, with just the tail still attached so no need for messy peeling. I might have expected the prawn to have suffered due to the car journey between Mayfair and north London but it did not, and in fact all of the food was still piping hot and delicious. 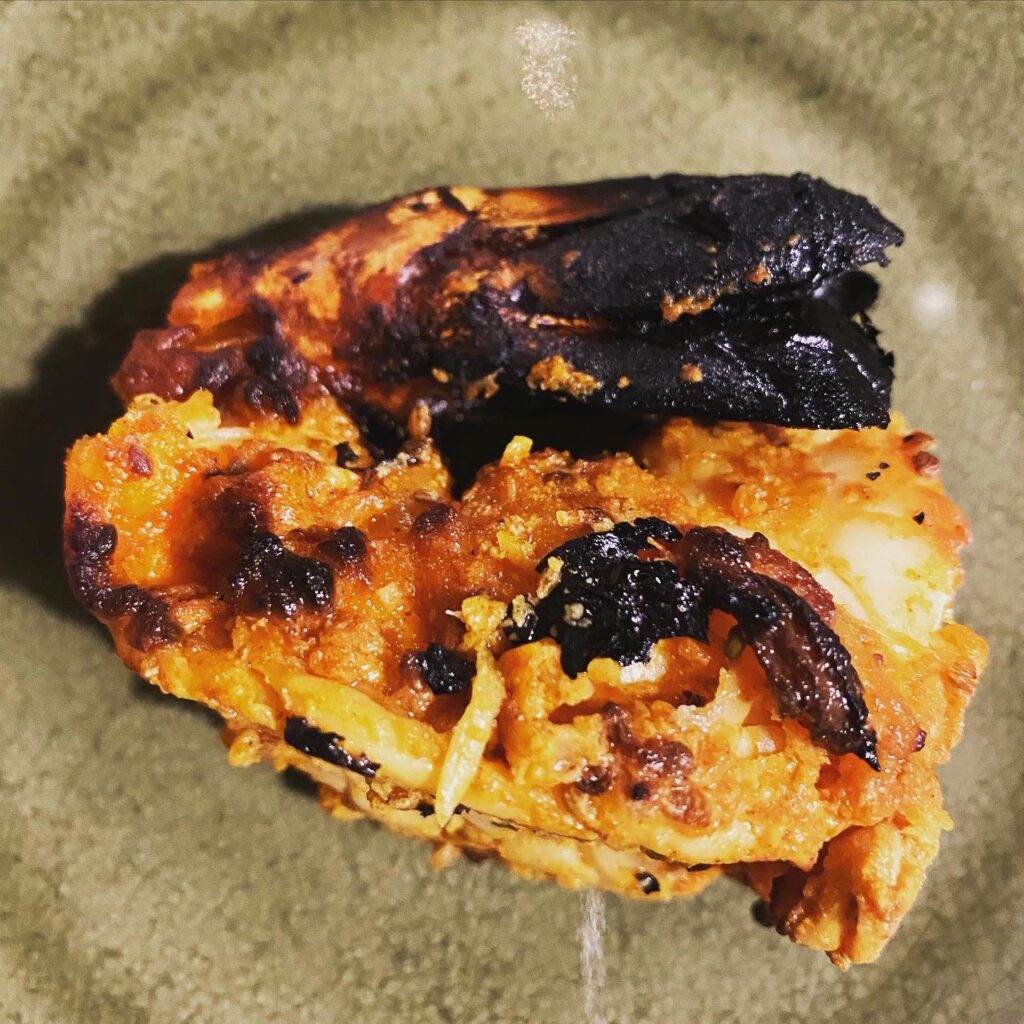 Chilli chicken was a large portion of diced chicken in a sweet chilli sauce, with onions and peppers. The flavour of the sauce was delicious, although my mouth was rather on fire from the spices. That didn’t stop me greedily serving myself seconds. 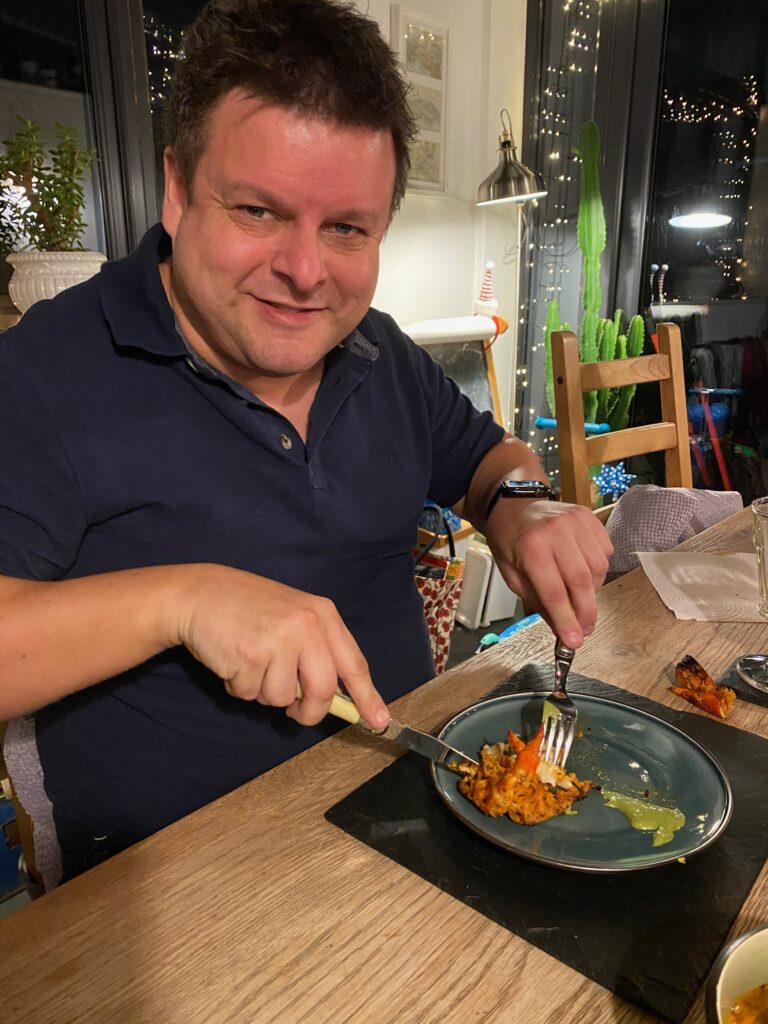 The curries: railway goat and chicken tikka masala, were also fabulous. The goat was coated in a thick brown sauce, and was so tender. The chicken thighs were soft and juicy and there was plenty of mild tomato sauce which I mopped up with the buttery parathas.

The rice was aromatic and fluffy (again, despite the car journey), and the signature black daal was packed with flavour (and spice). The red onion salad was cooked onions, warm with lime and chilli as a garnish.

We both piled our plates with a bit of everything, and although the portions were indeed huge (enough for the same again for dinner the next night), my plate is a small one so I am not a completely greedy pig (just a little bit of one). 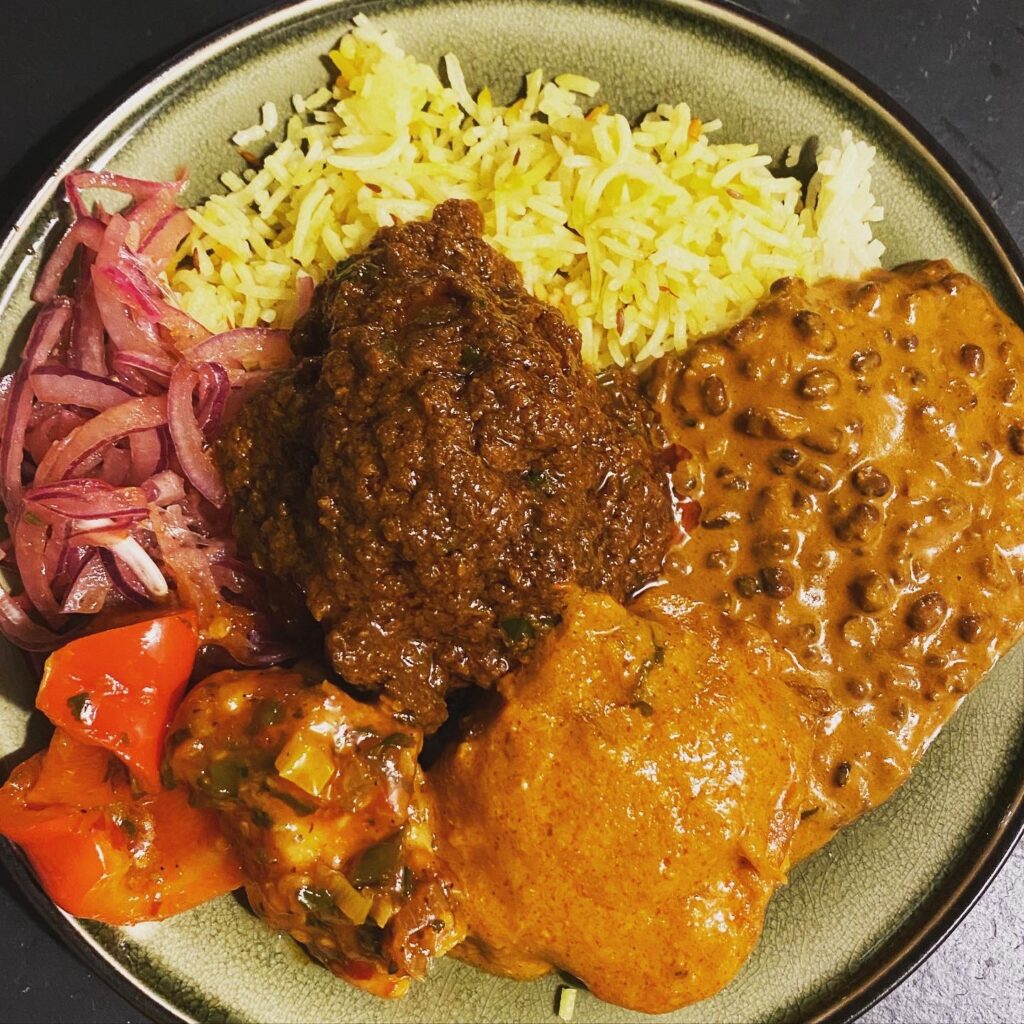 The desserts were quite classical Indian desserts – and I must admit that they are not my favourites as they are so sweet and aromatic. I expect if you do enjoy them you would adore these. Portions are again absolutely huge and the Gulam Julab fried milk balls were very light and delicate, although SWEET! 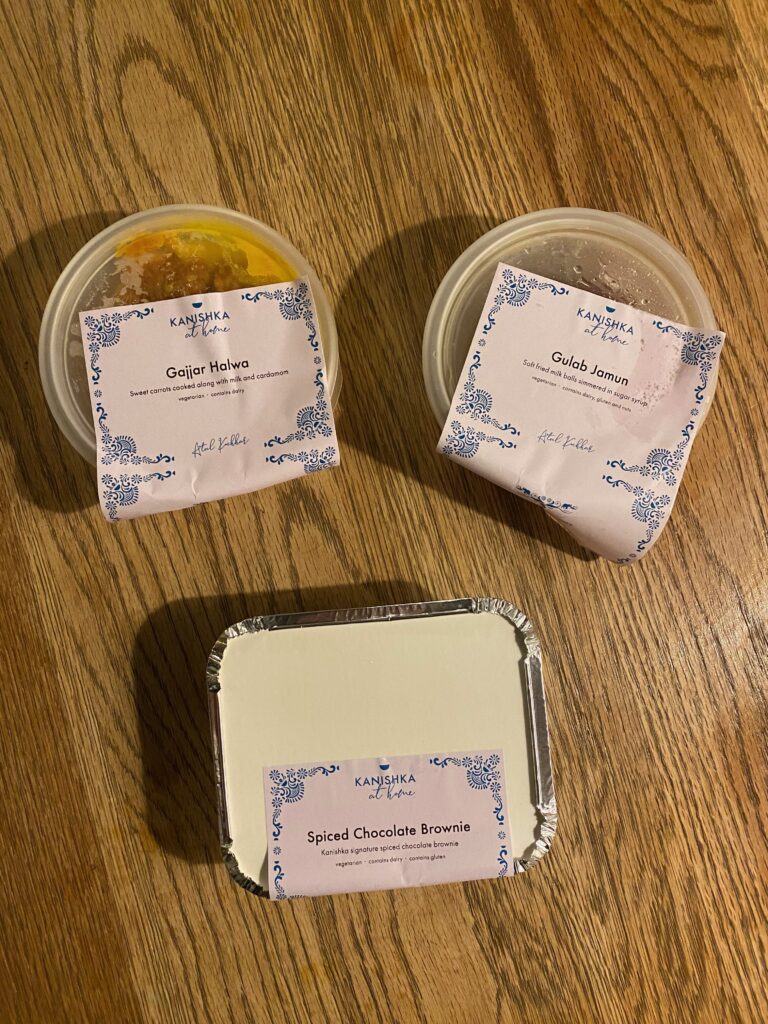 Some small quibbles: the poppadoms and chutneys offered as part of the drinks package did not arrive, and the signature spiced chocolate brownie (which was given as a complimentary treat by the restaurant) turned out to be another onion salad when I opened it! But I emailed the restaurant and they immediately offered to make up the error next time around, and it definitely would not stop me ordering from them again.

I think what this demonstrates more than anything is that high end restaurants like Kanishka are not geared up for home deliveries, but have made the very best of a bad situation and have done an excellent job of it. The experience simply cannot be the same as it would be in the restaurant itself, but it’s leagues apart from your standard takeaway option. The quality of the ingredients and their cooking is exceptional, and if you have a special occasion to celebrate then I highly recommend pushing the boat out, and making the misery of lockdown a bit more tolerable.

Otherwise this week, I have the following planned for our meals:

What is on your menu this week? Until then, here’s another picture of my little snowman! 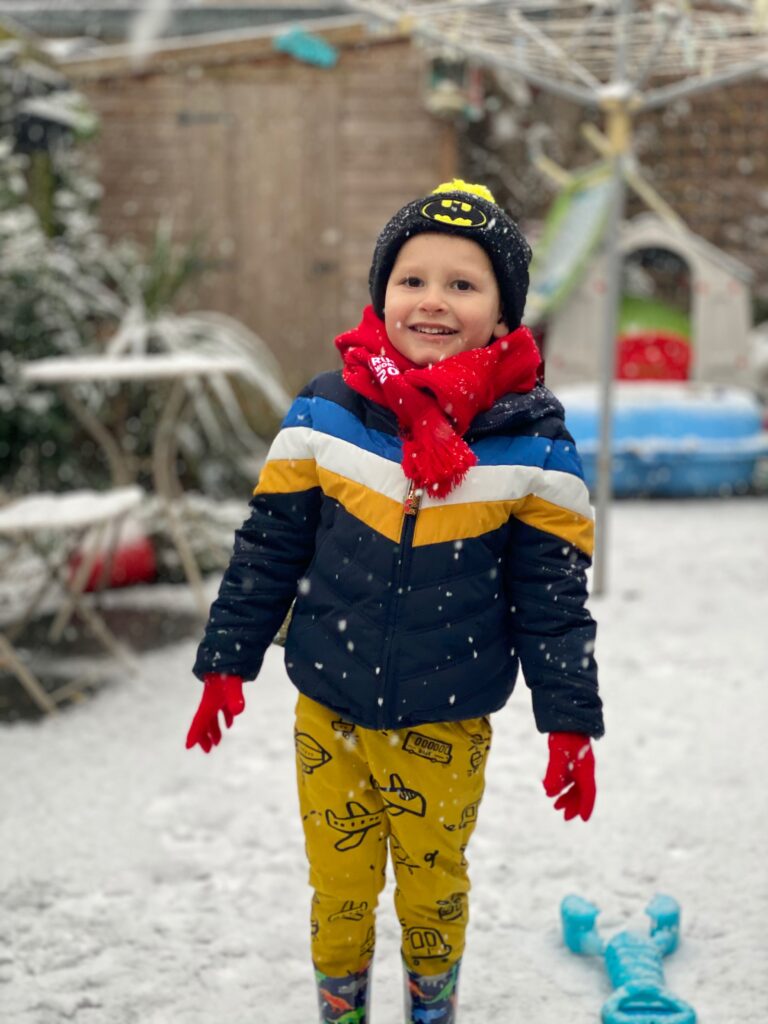